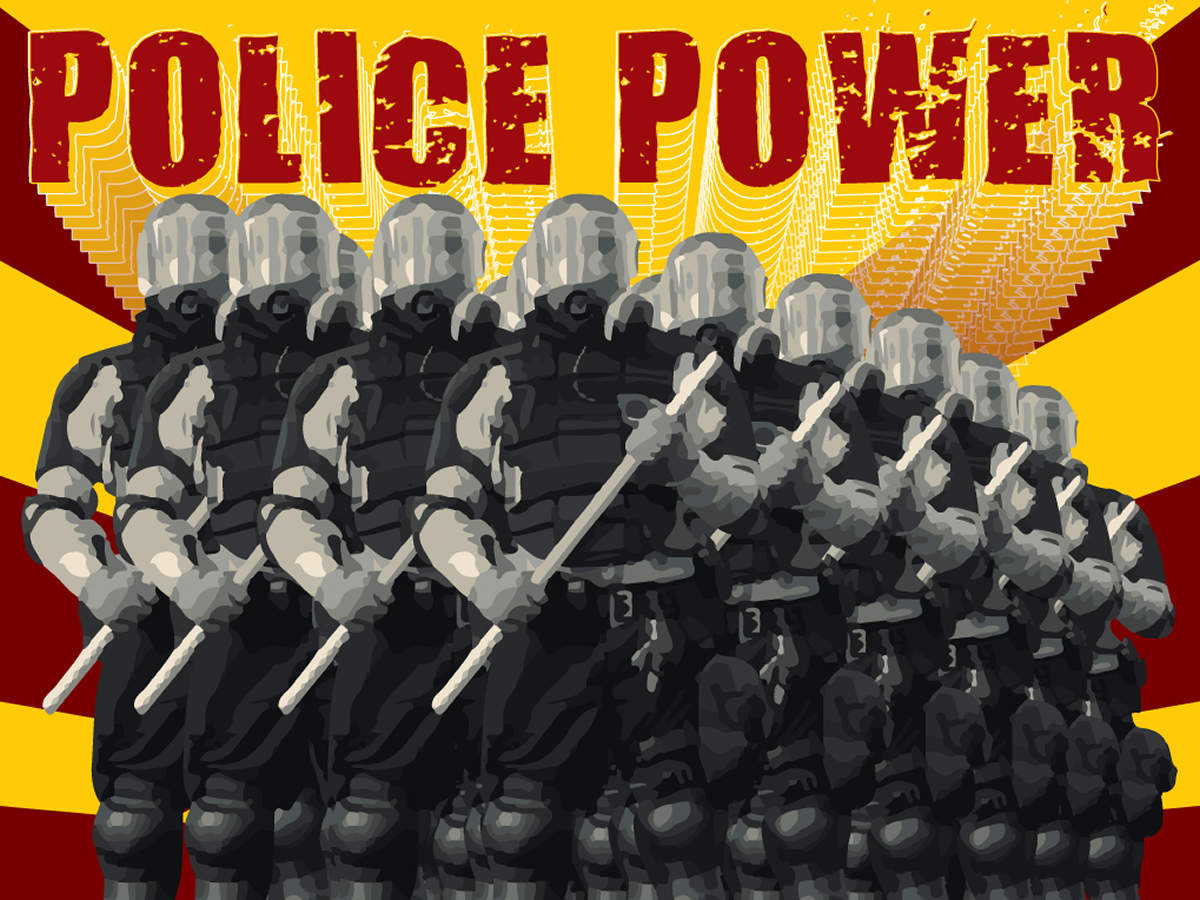 But members of the marijuana community already know that some police officers are criminals who abuse citizens they’re sworn to protect.

We know that policing is dangerous work, and we appreciate the good that police do.

But there are far too many occasions when police officers act unprofessionally, or worse, when they’re dealing with us.

For example, a heavily-armed and armored police SWAT team raided my home, even though I was legally growing medical marijuana.

A dozen officers were in on the raid.

They punched me and knocked me to the ground, even though I wasn’t resisting arrest.

They stole cash from my house.

They killed my valuable cannabis plants.

During the bust, when I was face-down on my living room floor with my hands handcuffed behind my back, an officer put a double-cocked gun to my head.

“If you move even a half inch, if you don’t confess to sales, I could blow your friggin’ brains out right now, say you were resisting arrest, and nobody would do a damn thing about it,” he said. “You’d just be one more dead pothead.”

You can imagine how terrified I was.

The raid and its aftermath were so shocking that I got PTSD that has plagued me for years.

I had to spend $3700 on an attorney to defend myself against a violent, illegal raid that should never have happened.

The charges were eventually dropped.

The judge said, “You’re a legal grower. This raid should never have happened.”

When I filed a complaint against the police for falsifying evidence to obtain a search warrant, for threatening to shoot me in the head, and for stealing from me, I didn’t get any justice or compensation.

The police lied to cover up their misconduct.

I didn’t have enough money to file a lawsuit.

Police: Out of Control & Unaccountable

Many of us believe there are two categories of police officer: those who commit illegal acts against citizens, and those who maintain a complicit code of silence about fellow officers who engage in those acts.

What I’m saying about the police isn’t an opinion.

Consider the fact that police in Alabama routinely planted marijuana and guns on hundreds of innocent citizens, busted them, and many of those innocent people were sent to prison.

It isn’t just people of color who get brutalized by police, it’s anybody the police dislike.

Every year in America, even though the majority of Americans want marijuana legalized, 800,000 or more people are corralled by police officers for alleged marijuana crimes.

In many cases, the arrested people find out that the officer’s actions were motivated by prejudice against marijuana, by racial profiling, or by the potential to profit from asset forfeiture.

In Denver, police  officers viciously beat a suspected drug offender in the head as the man lay passively on the  pavement, and when the man’s pregnant wife tried to stop them,  they knocked her to the ground too.

In South Florida, a police officer at a high school tried to illegally seize a 14-year-old girl’s cell phone.

She refused to give it to him, so he broke her arm in multiple places.

In South Carolina, an orphaned, abused high school girl who refused to stop using her cell phone in class was body-slammed and dragged across the classroom floor by a school cop.

In New Mexico, a woman was arrested on drug charges and probation violations.  Officers claim she had drugs concealed in her vagina, so they sprayed her vagina with Mace.

ACLU spokesperson Peter Simonson said he was shocked by “the wanton disregard and maliciousness the officer demonstrated.”

In Georgia, a SWAT team did a drug raid on the home of David Hooks in the middle of the night, based on a false tip from a whacked-out drug informant.

When Hooks saw unidentified, armed men breaking into his house, he believed they were robbers, and reached for an unloaded shotgun.

Despite a 44-hour search, they found no drugs at all.

The sheriff’s department interfered with an investigation into the shooting conducted by the lawyer for the dead man’s widow.

In Cartersville, Georgia, a drug interdiction unit used drug dogs and military hardware to raid the home of Dwayne Perry after a police helicopter surveillance team spotted what officers thought were marijuana plants.

The plants turned out to be the vegetable okra!

In Kansas in 2012, sheriff’s deputies armed with assault weapons and wearing military gear pointed guns at Adlynn and Robert Harte and their two children while executing a search warrant for marijuana.

But instead of finding cannabis plants, police found three tomato plants, a melon plant and two butternut squash plants in a basement hydroponics garden set up by Harte and his 13-year-old son, whom officers accused of being a stoner.

According to a lawsuit filed by the Hartes, the police had been observing a hydroponics store and saw the father and son shopping there.

(The hydroponics retail industry doesn’t like it much when you tell the truth about police monitoring hydroponics stores, but it’s a sad fact that instead of stopping violent criminals, police spend their time watching hydroponics gardening stores).

The police looked in the Harte family’s garbage and found used-up, wet tea leaves that they claimed were marijuana leaves.

This flimsy “evidence” was enough to convince a judge to sign a search warrant.

In August 2013, police in Arlington, Texas, SWAT police conducted a massive, violent raid on the “Garden of Eden,” an organic farm and commune.

Acting on these tips, police flew helicopters over the farm, and police commanders sent in undercover narks who attempted unsuccessfully to buy marijuana.

Then police conducted their brutal 10-hour raid, during which non-violent farm workers and commune residents were thrown down, handcuffed, and held at gunpoint for hours.

No marijuana plants were found, but police did uproot 17 blackberry bushes, 15 okra plants, and 14 tomatillo plants, along with native grasses and sunflowers.

Also in Texas, a police officer chased down a woman driver who hadn’t been violating any traffic laws, forcibly removed her from her vehicle, and threw her in jail, where she died under mysterious circumstances.

In Georgia, military-style SWAT police stormed into a home where Alicia Phonesavanh and her one-year-old son were visiting.

It was the middle of the night and the officers were doing a poorly-planned drug raid based on a falsified search warrant affidavit, but they found no drugs at all.

Officers threw a grenade into the baby’s crib.

The grenade blew a hole in the baby’s face and chest, and left him scarred for life.

His family is stuck with a million dollars in medical bills.

The local government and sheriffs office blamed the family for the raid, said the officers did nothing wrong, and refused to help the mother and her police-injured child!

Worse yet, only one police officer was prosecuted for the raid, and she was acquitted!

In July, 2014, a Tampa, Florida SWAT team raided the home of 29-year-old Jason Westcott and shot him dead with no provocation.

The raid was allegedly based on a confidential informant’s tip.

The informant allegedly said he’d bought less than half an ounce of weed from Westcott over a period of several months.

Police lied about why they raided Westcott, initially claiming that a neighbor had narked on Westcott.

Later, police claimed an undercover police officer made a marijuana buy from Westcott.

Later still, police admitted there’d been no tip from a neighbor, no undercover buy.

Police admitted the raid was based solely on information provided by a confidential informant.

The informant says the information he provided police was unreliable.

The informant also says police made no effort to independently verify whether or not Westcott was a “drug dealer” who deserved to be raided and killed.

Despite a thorough search, the police found only 0.2 grams of marijuana.

Think about it: shot dead for less than a gram of cannabis!

In these cases and many other police abuse cases across America, several factors are often present:

Add to this the police shooting of unarmed black men in Ferguson, Missouri and Tulsa, the NYPD choking to death an unarmed black man, and other highly-publicized police misconduct incidents, and you realize the obvious fact that police have become an unaccountable occupying army.

Nobody is safe from them.

You don’t have to be a criminal to be attacked and even killed by the police.

Billions of dollars worth of military weapons and other war hardware have been given to local police departments.

And more and more police officers are veterans of America’s wars in Iraq and Afghanistan.

Police have military hardware and training to wage war on anyone who gets in their way, especially if the person is an ethnic minority or a protester against the elites who run this country.

The important question is, how do we in the marijuana community protect ourselves from police?

I recommend you read this article about a former drug cop who made videos telling you how to avoid getting busted.

Be hyper-vigilant in any situation involving marijuana and police.

Hook up a security camera system for your home and car.

Be prepped on using your cell phone to make video and audio recordings of any encounter with police.

Also, read this article about how and why to keep your mouth shut about your cannabis grow op.

Watch the videos embedded in this article.

The harsh fact is that police love to do marijuana raids so they can bust non-violent people and steal their assets.

If you’re a victim of police brutality or other police misconduct, consider fighting the police in criminal court, or at least suing them in civil court.

Make individual police officers pay for their abuses by calling for them to be fired, and by suing them personally.

And stop believing that there are a few “bad” cops, but the rest are good.

Because the fact is, the cops cover up for each other.

They’re badged gangsters with a “no-snitch” policy–95% of police officers are either guilty of criminal activity, or silently complicit.

Be aware that police officers can do great harm if you give them the opportunity, and they’ll get away with it, until marijuana is federally legalized and the drug war is totally ended.