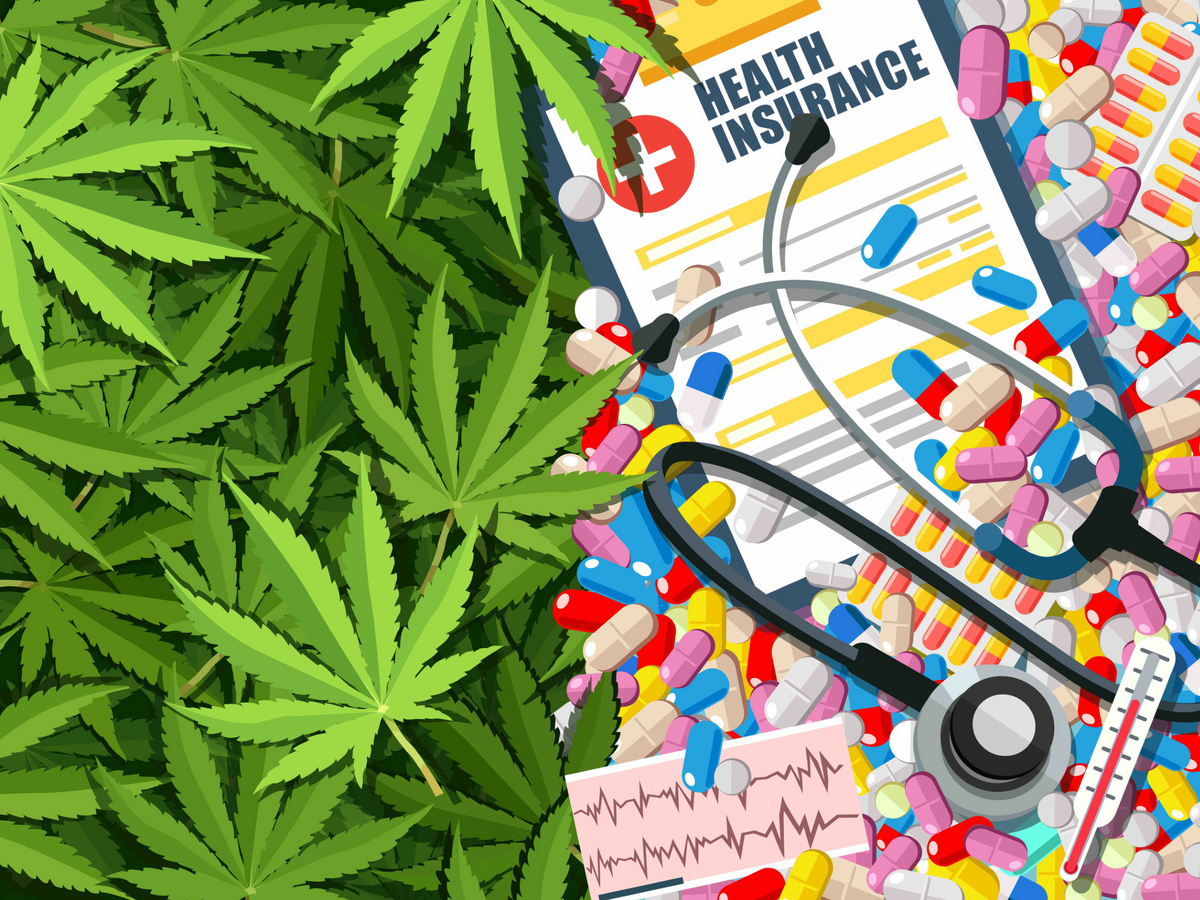 I used to feel that growing cannabis successfully and consuming large quantities of my own buds provided me a happy, fulfilling life that was well worth living.

But in the past four years, I started to notice something. A feeling of being lost and anxious, at times despairing of life itself.

I tried various self-help and spiritual growth strategies, which ultimately had little effect. I also analyzed my life as if it were a broken machine, hoping to discover what glitch could possibly be causing these unpleasant feelings.

But when I went to a forensic psychiatrist, I finally got the truth I was seeking — and it’s a truth relevant to the wider cannabis-growing community.

To begin with, let’s acknowledge that there is a marijuana grower subculture. Until the advent of state legalization, growing was completely an outlaw profession. If you were growing weed, you were breaking the law, putting yourself at risk of arrest or robbery, playing a dangerous game of hide-and-seek.

In that criminalized context, it’s no surprise that until recently, the vast majority of cannabis growers and entrepreneurs were males with personality types that categorize them as rebels, outcasts, rule-breakers, loners, idealists.

For sure, legalization has somewhat changed the profile of the grower demographic. There are now more women growers, legal hobby growers and large-scale commercial growers. In some states, cannabis growing has come out of the closet, so it’s less outlaw than before.

Still, the outlaw rebel remains today as a significant marijuana-growing archetype. But with that outsider persona comes a psychological and social price that growers often pay, especially if they grow black-market cannabis.

The forensic psychiatrist I consulted with also has other growers as clients. I had already explained to him that growing and consuming cannabis was a huge part of my identity and livelihood.

He earned my trust during our first session when he identified that the loss of an emotionally supportive social life appears to be an inevitable result of being a black-market grower.

His words resonated because I’ve met at least 100 serious growers, and the majority of them are indeed single males who live somewhat isolated existences, often without a life partner or family — just like me.

The psychiatrist acknowledged it’s wise for a grower to live a very guarded existence so as to avoid jail and being robbed or blackmailed. But he warned that furtiveness, guardedness, and fears inherent to black-market growing can lead to the potential diagnosis of a condition called avoidant personality disorder.

According to his adaptation of the American Psychiatric Association’s Diagnostic and Statistical Manual of Mental Disorders (DSM-5), a person must consistently exhibit at least four of the following traits to meet the diagnostic threshold of avoidant personality disorder:

The psychiatrist pointed out that this diagnosis is only appropriate for people who display these traits because they have deep-rooted feelings of shame, inferiority or inadequacy, or because they’ve had traumatic experiences with people (such as being bullied or sexually molested) that makes them rationally afraid of others.

Growers, in contrast, may exhibit a healthy degree of pride and self-esteem. Or they may have already had avoidant personality disorder traits present before they started growing cannabis, and chose growing as a profession because it allows them to hide from society.

To further complicate the diagnosis, he noted, growers often display avoidant personality disorder traits because they have legitimate concerns about safety and security.

In other words, cannabis cultivators avoid people not because they have avoidant personality disorder, but because they’re justifiably afraid of getting busted or ripped off.

Regardless of why a cannabis grower exhibits signs of avoidant personality disorder, the traits are counterproductive to the health of the grower’s emotional state and social life. These people are often walled off from sufficient human contact, failing to develop healthy romantic relationships, long-term friendships, or even familial relationships.

Having failed to develop deep, trusting relationships — and thus living a lonely, alienated life — can create a syndrome of social isolation that harms you physically, economically and emotionally.

According to a scientific study about social isolation published by the US Department of Health & Human Services:

Perceived isolation is related to, and in some cases affects, human neural, hormonal, cellular, and genetic processes. Early in our history as a species, we survived and prospered only by banding together—in couples, in families, in tribes—to provide mutual protection and assistance. The pain of (perceived) isolation evolved like any other form of pain.

I’ve experienced the pain of social isolation for much of the time I’ve been a cannabis grower. Before I started growing, I had a satisfying social life filled with lovers, friends and family visiting my home frequently.

Back then I didn’t have a secret, illegal career to conceal, so I was able to be spontaneous and authentic when people asked what my career was.

But after I started growing marijuana, I no longer felt safe having anyone in my house. I had to create a cover story to camouflage that I was a professional cannabis grower.

This secrecy and guardedness shuttered my dating life. When potential lovers asked to come over to my house or what I did in my job, I had to lie about my career and make excuses for why they couldn’t visit me or enquire further. They became suspicious about my evasions, and stopped dating me altogether.

As a full-time cannabis grower, I can go an entire week without having any in-person contact other than a brief encounter with a grocery store clerk or a fellow grower. The loneliness crushes my spirits, especially in the evenings. No matter how much weed I use, these bad feelings never fully go away.

I see now, with an increasing degree of rueful regret, that I’ve missed out on a normal social life because I grow marijuana.

These Are The Physical And Mental Concerns Of Cannabis Growers

The forensic psychiatrist told me that another DSM-5 diagnosis common among growers is generalized anxiety disorder. The criteria for this disorder include:

This diagnosis piqued my interest because I have many of those symptoms, especially if I go for a few days without consuming cannabis. The psychiatrist stated that cannabis is suspected of causing delusional paranoia and excessive worry in some individuals.

He also said abrupt cessation of cannabis use by a chronic consumer can lead to cannabis withdrawal syndrome, which has symptoms including irritability, insomnia, depression and anxiety.

Couchlock types of cannabis, such as mind-numbing Kush and indica strains, are often used to mitigate generalized anxiety disorder.

The psychiatrist said no doubt the illegality of cannabis makes anxiety and paranoia a rational response for growers. When you grow weed, you’re always violating federal law, and in many states you’re also violating state law. So, if you aren’t at least a little worried and paranoid as a cannabis grower, it’s reckless and imprudent.

No surprise that there are psychiatric diagnoses describing the trait of reckless, potentially self-destructive failure to recognize and avoid danger. These include a subcategory of borderline personality disorder, and another diagnosis called oppositional defiant disorder.

A clinical diagnosis of either or both of these disorders isn’t always applicable for marijuana growers, the psychiatrist informed me, but these “rebellious personality” disorders are sometimes present in people who engage in risky behaviors, refuse to abide by societal norms, engage in criminal activity, and are unable to restrain themselves from engaging in behaviors they know put them at risk.

I felt like he was describing me and many other cannabis growers I’ve known. I was already a rebel and a person who didn’t believe in all of society’s laws before I decided to start growing. It was a way for me to fight back against societal and government oppression.

Above All, Cannabis Growers Must Deal With Depression

The forensic psychiatrist said another emotional illness he frequently sees in growers is major depressive disorder, described as when a person experiences long-term loss of enjoyment of life, low energy, zero motivation, frequent thoughts of suicide and overwhelming sadness.

With a depressive disorder, these symptoms aren’t the result of substance abuse, physical illness or life circumstances (e.g., death of a loved one or divorce). Rather, they’re a mental and emotional syndrome that operates, regardless of life circumstances.

Many cannabis consumers are using cannabis to alleviate depression, he said, with mixed results. However, he noted that the psychiatric profession’s fallback treatment for major depression is to prescribe antidepressants, which can be more dangerous to people than cannabis.

According to an article published in peer-reviewed medical journal in The BMJ, antidepressants can be linked to increased risk of suicide and homicide, even in patients who never had suicidal or homicidal thoughts before taking pharmaceuticals.

The FDA admitted in 2007 that SSRIs can cause madness at all ages and that the drugs are very dangerous; otherwise daily monitoring wouldn’t be needed: “Families and caregivers of patients should be advised to look for the emergence of such symptoms on a day-to-day basis, since changes may be abrupt.” … “The following symptoms, anxiety, agitation, panic attacks, insomnia, irritability, hostility, aggressiveness, impulsivity, akathisia (psychomotor restlessness), hypomania, and mania, have been reported in adult and pediatric patients being treated with antidepressants.”

The documented fact that antidepressants can cause more problems than they solve doesn’t surprise me. I’ve taken seven different antidepressant drugs, and each made me feel worse instead of better, with five of them immediately generating bizarre thoughts of imminent suicide to the extent that I stopped taking the drugs almost as soon as I started taking them.

Antidepressants also caused me physical discomfort, while marijuana helps me fight depression and has far fewer and much less severe side effects than pharma drugs, and never causes me to have suicidal or violent thoughts.

The benefits of a forensic psychiatrist is that they function as a psychological detective attempting to understand and remediate the full scope and causes of emotional problems.

The forensic doctor and I worked out an action plan to ward off the cloistered, lonely place that growing can become. This action plan included:

While I view most psychiatrists as servants of the pharmaceutical industry, I’ll admit it was helpful to see a forensic psychiatrist, which is why I’m sharing his wisdom now.

During our final meeting, he indicated that given the circumstances of my chosen “risky profession,” I was experiencing the expected consequences of not choosing a more conformist, safe life, didn’t see me as having formal psychiatric syndromes. This point of view was something of a relief to hear.

The bottom line is this: If I follow his advice, reintegrate into the community, and build friendships with good people, I can still be a cannabis grower and have a healthier, more fulfilling life.

Frenchy Cannoli Reveals All About His Ancient Resin-Making Techniques Learnt From Years Of Hash Travels
Here’s What It’s Like To Attend A High Times Cannabis Cup, Post Legalization