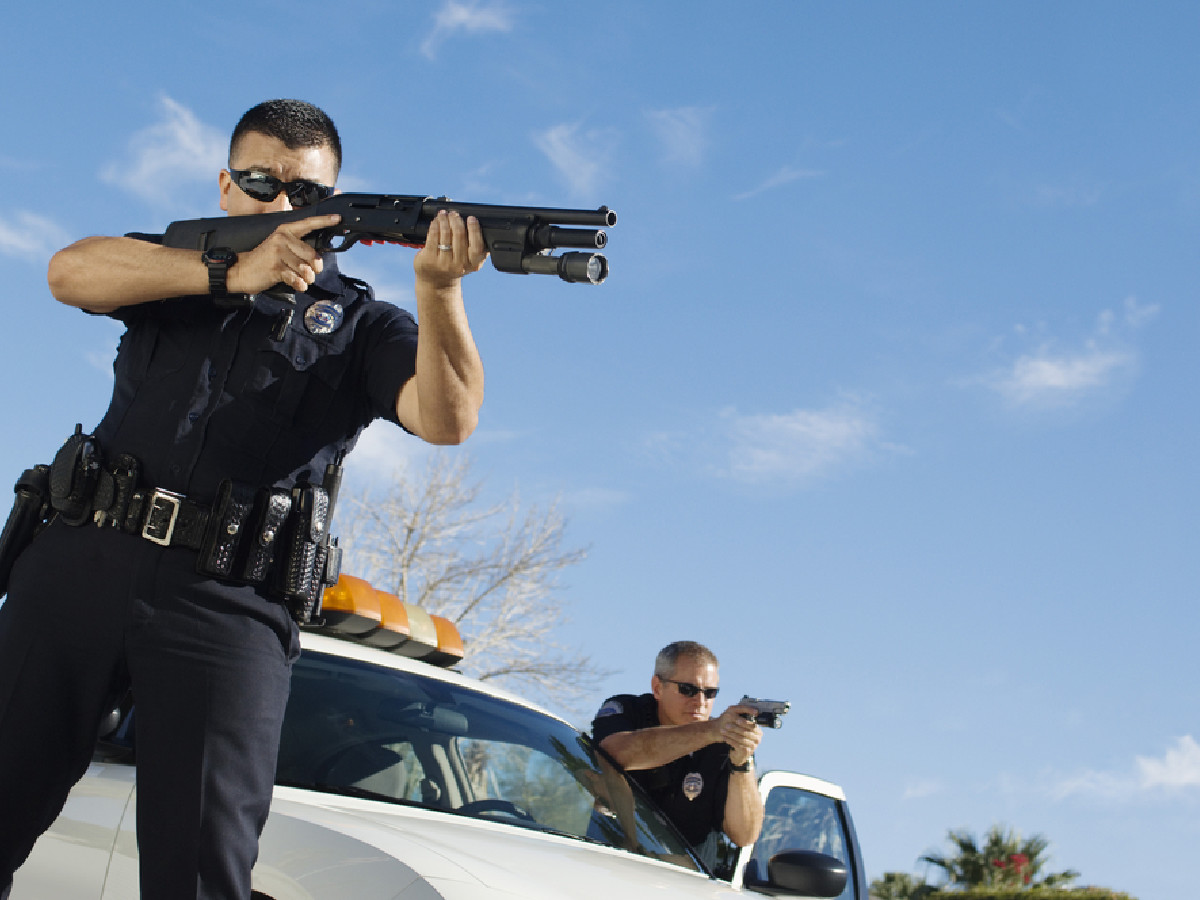 When you’re a marijuana grower, these are the last people you want to see!
By Larry T. | Published: August 21, 2017

A “for sale” sign went up on the house across the street from me, right about the time I germinated another crop of premium plants.

I live in a state where growing marijuana is illegal, but I consider cannabis prohibition a violation of my constitutional right to life, liberty, and the pursuit of happiness, given that I need cannabis for medicinal purposes. And so I choose to grow weed in spite of the law.

When the seedlings were only a couple of weeks old, they were already giving off the overpowering smell of their diesel and skunk genetics as the real estate agent held showings for prospective buyers.

By the time my plants were ready for 12/12 bloom phase lighting, that house across the street had sold and its new owners were moving in.

Ever the good samaritan, I went over, introduced myself, and helped them carry some boxes into their new home.

They were a nice married couple in their late 20s and I was glad they were my new neighbors.

But then I glimpsed framed photos they’d placed on their living room mantel, and got a sick feeling in the pit of my stomach. Why? Because I noticed that in some of the photos the husband was in a police officer’s uniform!

I casually pointed to the pictures and politely asked my new neighbor, who for the purposes of this story I’ll call “Officer Jim,” if he was a police officer.

He nodded, affirming he’d been a patrol officer for five years in the most dangerous part of a nearby big city.

“Thank you for your service,” I responded. “I can’t imagine having such a dangerous job.”

My Longtime Resentment Toward Police Officers

I started fearing and hating the police several years ago, when they executed a pre-dawn SWAT raid on my house where I’d been growing 11 plants.

They barged through my door, roughed me up, ransacked my home, and lied on the witness stand.

They weren’t “just doing their job.” The arrest was a personal attack against me, and as a consequence I had to sell my house and move away. Yep, the bust cost me lots of money and caused a whole heap of trouble.

Following that unfortunate incident, I channeled my anger into researching the history of American policing, and how the drug war created a militarized police force. (If you wish to know more, this book, Rise of the Warrior Cop: The Militarization of America’s Police Forces, is an excellent read.)

According to a statistical analysis from the American Civil Liberties Union (ACLU), more than half of all drug arrests are for marijuana.

The fact is, the drug war is an unwarranted attack on our peaceful cannabis culture and the world’s most beneficial plant.

Check out the video below from Vice for more information.

I wanted to help the cause, so I became a volunteer paralegal, assisting attorneys who fight for the rights of medical marijuana patients and growers. I heard marijuana defendants tell stories of police abuses that reminded me of my own arrest. For this reason, my antipathy toward police further deepened.

Whenever I saw a cop car behind me, or any cops for that matter, I struggled to suppress my simmering sense of panic and rage.

Whenever I saw another news story about police shooting unarmed citizens, my fists clenched with indignation.

And as I stood in my new neighbor’s home, realizing he was a police officer, I felt a chill come over me.

Growing Marijuana in the Danger Zone

When I left Officer Jim’s house, I believed he and his wife had a favorable opinion of me. After all, I was the only neighbor who’d welcomed them into our community.

But when I was safely back inside my own house, I felt extremely worried and afraid.

A cop across the street! That’s almost the worst thing a marijuana grower could imagine.

I seriously considered tearing down my cannabis grow op, selling my house, and moving.

You see, before Officer Jim moved in across the street, my grow op was no worry. All my other neighbors are older people who have no idea what live marijuana plants smell like.

I use scrubbers in my cannabis grow room, but sometimes during autumn and winter I open my house to let my plants enjoy fresh, cool air.

If I open the grow room during bloom phase, the smell of cannabis becomes intermittently detectable outside my house, but I never feared that my neighbors would recognize the smell and nark on me.

But now I knew that if I grew weed with a police officer living nearby, I’d have to run a totally sealed, odor-locked marijuana grow op. I knew that would spell extra costs and inconvenience.

It made me feel jinxed, that of all the people who’d buy the house across from me, it had to be an officer of the law.

Not only that, but prevailing winds in our neighborhood were from south to north, and the cop lived on the north side of the street, right across from me. So that dank bud smell would blow straight over to his house!

My grower friends all said I should stop growing immediately and move away. But I didn’t want to. It wasn’t practical, financially or logistically.

I decided the best I could do was grow less-stinky strains, keep my house sealed tight, add another carbon scrubber to my grow room, place Ona odor control dispensers in my garage and in a fake rock near my front door, and be as friendly to the officer and his wife as possible.

It wasn’t difficult to be friendly to Officer Jim, because he and his wife were nice people. They were expecting their first child; the wife’s baby bump was obvious.

As I got to know Officer Jim, I discovered he was chill, intelligent, friendly, unpretentious. He didn’t appear to have a power-tripping attitude or a predatory way of looking at other people.

I asked him about being a cop.

He said he puts on 37 pounds of gear before he goes to work. He and his wife pray together every time he leaves for a shift — in case he doesn’t make it home alive. He has a million-dollar life insurance policy that he pays $2500 a year for, in case his wife becomes a police widow.

Officer Jim’s beat is the roughest part of town, where his department sticks rookie cops to see if they have what it takes to survive on the mean streets.

He managed to handle those situations without shooting anyone, but one hood managed to slash him with a knife. He showed me the angry red scar on his neck to prove it.

“I had to club that guy unconscious,” Officer Jim recalled.

As a cannabis grower, I live a covert, chameleon-like life. My neighbors know me only as a short-haired, quiet, athletic-looking businessman. I don’t fit the marijuana grower stereotype.

But now I’ve endured sleepless nights, worried sick about what Officer Jim might do if he ever smelled my marijuana plants, or if I burned a bowl and he smelled the smoke.

I wondered if he’d turn me in.

I suffered recurrent nightmares about getting raided, seeing Jim’s face as I was thrown handcuffed into the back of a squad car, with him saying, “Sorry, it’s the law.”

When their baby was born, I gave the couple a stuffed elephant as a baby present, and went to their newborn’s christening party — where I met five other police officers!

I felt uncomfortable as an “outlaw” cannabis grower who’d hated police officers for years, and yet there I was, standing around in Officer Jim’s backyard eating barbecue with the po-po.

Fortunately, only one of those police officers fit the stereotype of the kind of cop I hate.

He was loud, obnoxious, pushy, foul-mouthed, aggressive, drinking beer after beer until he was severely intoxicated, smoking cigarettes, well-muscled. I’m sure he was on the ’roids. He talked incessantly about wanting to shoot “crazy n*****s in the ghetto” and how he wanted the criminal justice system to “fry ’em.”

This cop kept eyeing me up in a weird way, and I remembered that people told me in the past that my clothes smell like marijuana.

I tried to keep my distance from him.

Thanks To My Costly Grow Op Changes, The Officer Hasn’t Smelled My Weed — Yet

It’s been a year now since Officer Jim and his wife moved in. Their baby boy is growing fast. Jim and his wife always tell me their son loves the stuffed elephant more than any other toy he has.

I have genuine affection for this family. I admire Jim for putting his life on the line to protect society from really bad people. I admire his valiant wife, standing in their doorway holding the baby, as she waves goodbye every work day, not knowing if her husband will make it home to her alive.

But my rational fear of Jim, because of his job, harms me and my grow op success.

For one thing, I had to buy another scrubber and Vortex fan, which set me back $300. And the fan sucks down electricity like a thirsty dog sucks down water.

I had to purchase the Ona odor masking products and go through the hassles of using them. Because I can’t open my windows anymore, I spend an additional 10–15 percent on air conditioning.

I also spent money and time taping down my grow room windows from indoors, putting layers of poly plastic on them, adding insulating material into the window frame area, and taping it all in with yet another layer of white poly plastic.

I had to start growing strains that weren’t my favorites, just to keep the odor to a minimum.

My yield is the same, and because I’m running a totally sealed grow, my plants are now less susceptible to diseases and pests. But I’d rather not experience the extra grow op costs and other worries that Officer Jim’s presence causes me.

For example, during bloom phase, or when I combust or vaporize cannabis, I’ve been trapped in my house whenever I see Jim mowing his lawn or washing his car, because I’m afraid the marijuana smell may sneak out and make its way to his nose.

Sometimes I pace around outside my house at night, especially when the winds are flowing south to north, trying to ascertain if the scent of stinky buds is blowin’ in the wind.

I treat Jim and his family with sincere friendliness and respect. I’ve learned that not all police officers are bad people. Sometimes I fantasize that if I got busted, Officer Jim would intervene and tell the other cops to let me go, because I’m such a good person.

The sad thing is, there’s no way I could safely tell Jim, or any other police officer, that I grow marijuana, so they’d have a chance to learn that marijuana growers and users can be good people, too.