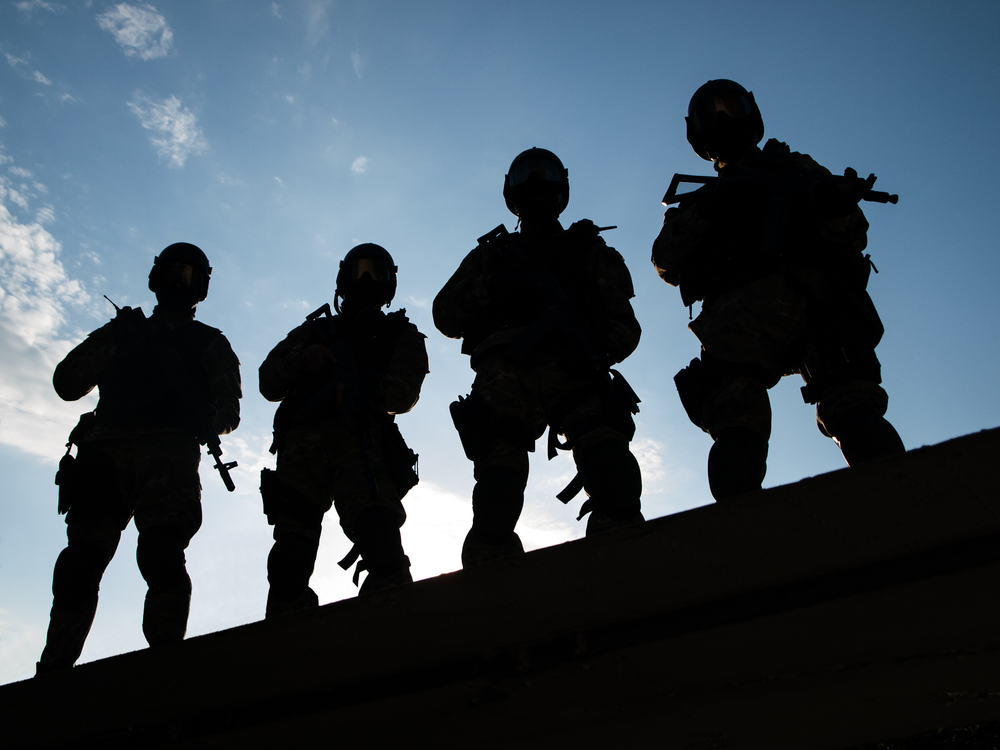 As a marijuana grower, user, and activist, whenever I see a police car or police officers, I feel afraid… very afraid.

And as we see news reports of militarized, crazy police shooting unarmed people in Missouri, Los Angeles, and many other places, we’re all getting nervous.

We’re living in a time when gun and badge gangs armed with military hardware using military tactics do whatever they want to us.

It might seem obvious why marijuana people get nervous or scared by police, but given that the drug war is a real war, we need to look a little more closely at it…

The first fact is that in this war, police are eager soldiers because they think of marijuana plants and marijuana people as “the enemy.”

The police are volunteer soldiers in the drug war.

To make it more of a real war, many police departments have military hardware and training.

SWAT teams are routinely used for drug raids, and there’s little if any difference between tactics and hardware drug police use in American cities and those used by American military special forces to attack “insurgents” in Iraq and Afghanistan.

When they go after a marijuana user or grower, they’re not just “doing their jobs.” They’re using the marijuana laws to beat down our cannabis culture!

It’s easy to see that many police officers dislike black people, which partially explains why white police officers put a non-violent, unarmed New York City black man in a chokehold and killed him as he begged for his life.

The New York City killing has been ruled a homicide, and it’s no surprise—rampant police abuse of black people and marijuana people in New York City has long been documented.

But have the officers who choked the guy to death been punished? No. They got off with no penalties at all.

in Ferguson, Missouri, the police department initially refused to even release the name of the officer who shot the unarmed black kid.

When people protested the Ferguson killing, militarized police from all over the state of Missouri quickly flocked in to suppress the protests…creating a scene that looked like a war zone.

They even beat up reporters from HuffingtonPost and the Washington Post!

I’ve seen first-hand how they are. When a squadron of SWAT police kicked down my door a few years ago to arrest me for legally growing cannabis, they made insulting comments as they beat me and trashed my house.

They stole my cash from me, and left me with a black eye and broken rib, but my lawyer said there was nothing I could do about it.

And I want to emphasize: this was in California, and I was totally in compliance with state medical marijuana law.

The raid was bogus. The charges were thrown out. The judge said the raid should never have happened.

He said that Supreme Court drug war rulings equate the drug war with real war, so my civil rights are erased.

I tried to sue the police officers to get compensation. I got nothing.

In all my subsequent interactions with police, and when I hear repeated reports describing police routinely using military tactics, excessive force, killing people, violating the constitution, but not being punished for their crimes, I realize we’ve lost our democracy.

In the war on marijuana, we have examples of recreational and medical marijuana users being busted, injured, and even killed for tiny amounts of marijuana.

We even see that an undercover police officer tricked an autistic youngster into selling him weed.

Sometimes, we find out actual names of police officers who war against the marijuana community.

For example, Seattle police officer Randy Jokela was named in media reports as the police officer issuing almost all the penalty “marijuana tickets” in Seattle during the first half of 2014.

Recreational and medical marijuana is totally legal in Washington State, but public use of marijuana is still illegal.

The law allowing officers to write a “pot ticket” for public consumption of cannabis explicitly tells police to avoid writing tickets if at all possible.

Officer Jokela ticket dozens of people for marijuana when he didn’t have to.

On top of that, he amade stupid comments about marijuana legalization, marijuana users, and government officials in his chain of command who support legalized marijuana.

Some of those rude comments he even wrote on the back of the pot tickets!

A disproportionate percentage of his tickets were written to penalize black people.

Of course, a main reason police get away with prejudicial, criminal behavior is that police unions back them.

This is easily seen in the case of Jokela, who’s still working as a Seattle police officer and received no pay loss or other disciplinary action for his personal war on marijuana.

His former beat was as a bicycle officer in Seattle’s west precinct.

Apparently, he’s been reassigned to protect him from those he unfairly ticketed.

“The involved officer is by far the hardest-working officer on this department I have known in my 20 years. Whether it was working in the Rainier Valley in a patrol car, or since he’s been downtown on bikes, nobody can hold a fiddle to his work ethic.”

And across this country, with opinion polls showing that 65% of Americans want marijuana legal like it is in Colorado and Washington, police officers need to be told the following:

“Hey, police officers, you dislike marijuana, but the American people want it legalized. You lost the drug war. Now stop persecuting the cannabis community, or we will report you, videotape you, sue you personally so you have to pay instead of the taxpayers paying for your misconduct. And we’ll do our best to get you fired.”