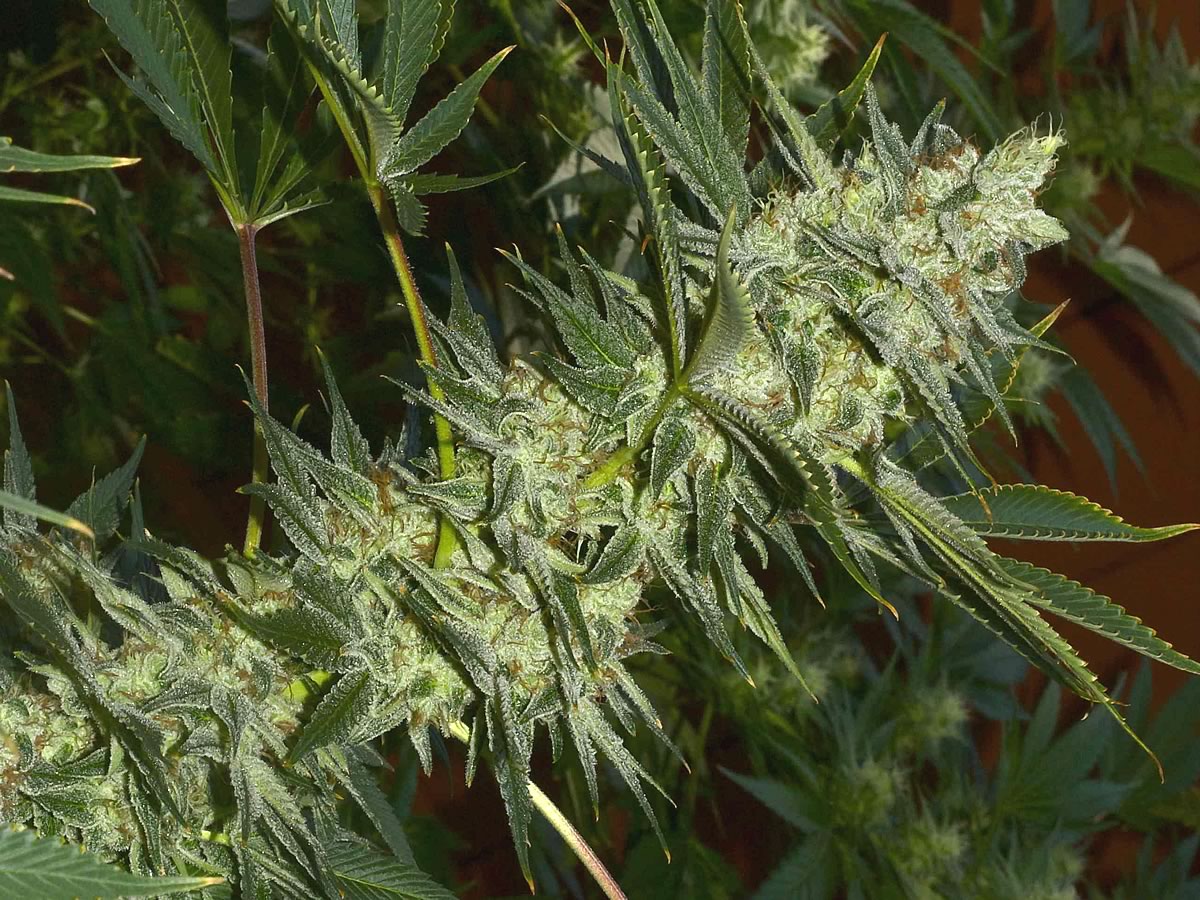 I grew the Timewreck, got fat buds, and when I got high on it, I found out it does wreck your sense of time!

When I contacted TGA to tell them how much I love Timewreck, I heard back from Subcool, star of The Weed Nerd YouTube television show, and the primary leader of TGA Genetics.

Subcool is one of the coolest people I’ve ever met.

The dude loves marijuana and marijuana breeding almost as much as he loves life itself, and that passion results in superb new TGA strains like one I just grew called “Sonic Screwdriver.”

Subcool is a big fan of the Dr. Who television show, and a sonic screwdriver is one of Dr. Who’s favorite and most versatile tools.

Sonic Screwdriver marijuana is also versatile. It can grow out into four different phenotypes, Subcool told me, although when I grew it earlier this year for the first time, I only got two phenotypes.

I planted in late May using a handmade peat-soil mix that was very light in nutrients and started growing indoors under 2600 watts of HID hydroponics lighting.

All ten Sonic Screwdriver seeds sprouted within three days, which is an indication of TGA cannabis seed quality—many of the other marijuana seed brands I’ve tried didn’t have seeds that germinated so fast, or at all.

I’ve now grown a total of three different TGA Subcool cannabis strains, and so far my seeds have a 100% germination rate.

I live in a legal marijuana state and have a private back deck that gets direct sunlight from 11 am to 3 pm, so after the seedlings had a few sets of leaves, I put them outside (each was in its own individual grow pot) to catch sun whenever the sun was strong.

The Sonics grew fast and were impressively healthy and robust.

Other growers doing outdoor marijuana growing in my area were plagued by spider mites, powdery mildew, and aphids that summer, but my Sonic Screwdriver cannabis plants had no problems.

I attribute that to Sonice cannabis being resistant to those kinds of problems, and that I foliar sprayed with Rhino Skin, which is a crop protector that deters pests and diseases.

The two different Sonic Screwdriver phenotypes were very different in appearance. One type had the height and shape of a classic Sativa, but the leaves were moderately-wide, like a hybrid.

The other phenotype was shorter and bushier, with leaves similar to the taller Sonic plants except very much darker green.

I flipped to bloom phase on July 4th, when the plants were about 2-3 feet tall.

By August 4th, all my cannabis plants had added significant height.

The taller phenotype cannabis plants were six feet tall and by the time I harvested, were nearing seven feet tall.

The tallness meant I had to raise two of my lights so they were flush with the ceiling, yet they were still too close to the tops of my plants.

This was especially important in providing light penetration to side branches up and down the plants.

By the end of bloom phase, the two phenotypes could almost have been confused for two completely different strains, but the smell from the buds was virtually identical.

The yields were huge. In fact, for the first time ever I witnessed the legendary “branch-breaking yields” that people talk about.

With three of my plants, when I was carrying them outdoors in bloom phase so they could get their daily sun, the branches were so heavy that they just snapped off!

I did a three-week dry and cure and sampled the short version and the tall version separately over a period of several days.

Buds from both phenotypes were wickedly potent. The taste was fruity, with a little pepper, and the smoke was smooth and soothing.

I preferred the buds from the taller Sonics because the high had more “head” to it.

And I definitely felt the mind-thumping influence of the Vortex and Timewreck genetics that are part of the breeding heritage of the Sonic Screwdriver cannabis strain.

My advice when you grow it is to top Sonic Screwdriver to make it bushier and rounder, and flip it to flowering when it gets to be about 28-31 inches tall, unless you have very high ceilings.

And always use nets, stakes or other plant supports with this potentially tall-growing cannabis strain.

When I emailed Subcool to tell him how much I love getting high from Sonic Screwdriver, he wrote back saying he was feeling worried because he has COPD, a genetically-caused respiratory disorder that interferes with his ability to inhale combusted marijuana, and even to breathe at all.

Given all the good Subcool has done for the marijuana growing world, I’m praying a miracle happens and his health is immediately and fully restored.