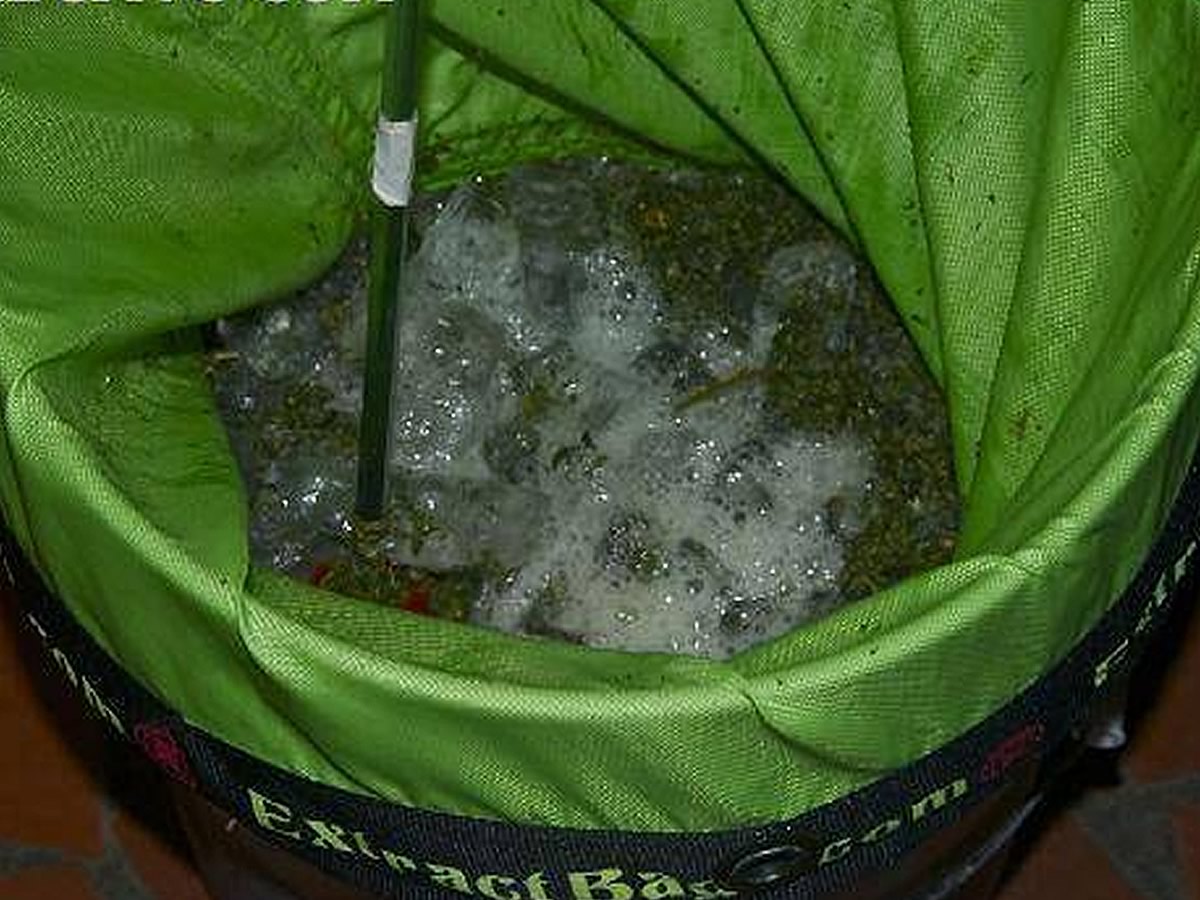 Bubblehash is a nearly-pure resin gland cannabis concentrate made using icewater instead of solvents.

You make it by placing marijuana in iced water and “washing” the cannabis to gather cannabinoid-laden resin glands.

When you use iced water to make hashish, you’re using temperature, stirring, and wet sifting to isolate the resin glands.

There’s no butane, C02, or alcohol solvents to worry about…and no explosions either.

Most people who’ve heard of water-made hashish are familiar with Bubble Bags and bubble hash.

The bubblehash production process involves putting marijuana in a “working bag” along with pure ice, then stirring and settling the mixture 15-30 minutes.

After that, you’re gently squeezing the mixture through a screen built into the working bag so a slurry of icewater and resin glands travel through the screen and into a stacked set of other bags that have different sized, progressively smaller screens.

After you’ve squeezed all the water and resin glands from the working bag, you discard the marijuana material in it, although some hashish makers will rewash or rescreen that material to get as much out of it as they can.

Then you work through each remaining bag, squeezing the water-resin slurry out so it goes into the remaining bags.

Depending on the type of medical marijuana you’re working with and the type of marijuana materials you used, each bag will have varying amounts of resin glands on its screen after you have squeezed the water out of the bag.

This happens because resin glands come in different sizes.

Most hashish connoisseurs believe that resin glands that gather on the bottom of the smaller pore size bags- 73, 45 and 25 microns- are the highest quality resin glands.

Take a look at how marijuana seed breeder, photographer and author Subcool does it…

In reality, the types and sizes of resin glands you collect depends on the cannabis strain you’re growing, and on the material you’ve chosen to use.

Every bubblehash batch you make will be slightly different.

It’s more like a vapor, which is nicer for your lungs.

Not only that, but by medicating with a marijuana-derived material composed of only resin glands, you get a stronger dose of cannabinoids, with far less of the combustion byproducts you get when smoking whole marijuana.

For marijuana growers, making bubblehash is a way to get value from leaves and inferior buds that would otherwise be discarded.

You’d be surprised how many resin glands are on leaves that get manicured off of buds and thrown away. Water extraction is a way of getting more usable cannabinoids from every harvest.

As an added benefit, marijuana water-washing removes contaminants and other materials that can affect your health.

Because of this washing effect, bubblehash doesn’t have much, if any, taste or smell.

Bubblehash is compact and concentrated, and doesn’t look like cannabis.

This is a huge benefit when you’re traveling, and need to carry a covert way to get high.

Icewater extraction takes a couple of hours, some preparation, ice made from pure water, and multiple steps.

And after you’ve done the bag work and gathered resin glands from each size micron screen they’ve accumulated on, you have several grades of bubblehash.

The glands and other material caught by the larger screen sizes (160 and 120 micron sizes for example) aren’t usually considered premium hashish; this stuff is often thrown away.

The remaining resin glands are carefully removed from each screen smaller than 120, water is pressed out of them, and then the materials are left to dry.

The process takes practice before you get it just right, but it’s fun, and the end product is amazingly potent and pleasurable.

You don’t put bubblehash in a pipe by itself and light it because it will just bubble, melt, and evaporate.

Most bubblehash users put their hashish on a bed of marijuana bud or ash. Some put it on a hot knife and use a glass tube to inhale the vapors.

When you get a hit of pure, well-made bubble hash, it gives you a different feeling than when you smoke whole marijuana.

Bubblehash effects are more immediate, acute and uplifting than when you smoke whole marijuana. Your lungs aren’t choked as much. You have less burn-out. Your “high” lasts longer.

If you love THC and other cannabinoids and want to get the most direct, concentrated and healthful dose of them, bubblehash is a joy.

This is a post-harvest activity you can really enjoy.

Once you start using bubble hash, you are likely to never go back to smoking only whole marijuana—that’s how different this hashish is from what you have experienced before.

Check out this bubble hash video by marijuana guru Jorge Cervantes, and start making your own bubblehash right now!