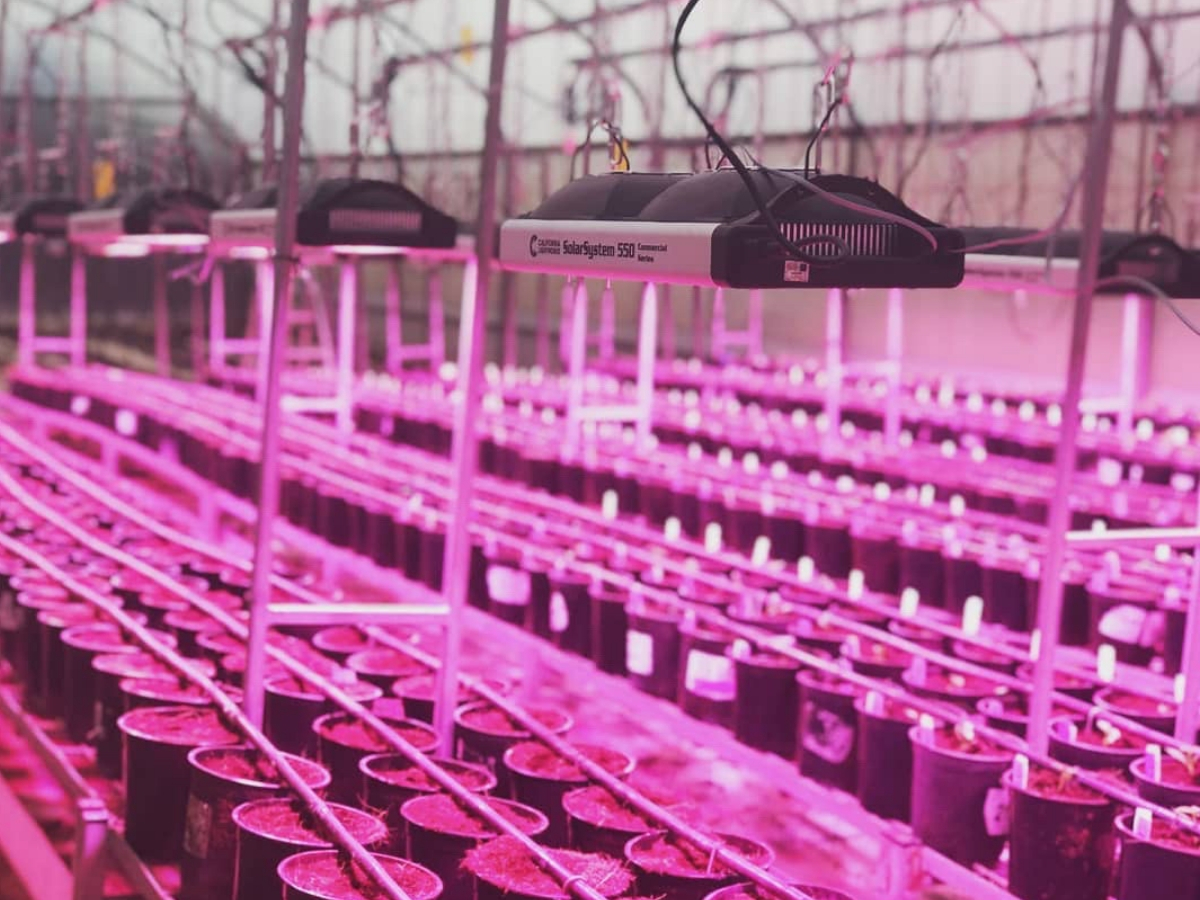 California LightWorks SolarSystem 1100 UVB is ideal for growing in a tent or as part of a larger grow operation. (Image courtesy of @calightworks)
By Steve Davis | Published: October 19, 2018

When it comes to lighting up cannabis crops, high intensity discharge (HID) metal halide, and high pressure sodium bulbs, ballasts, and reflectors, have long been the go-to grow-light tech for grow ops. But there’s a sprouting consensus that LED grow lights are where it’s at when it comes to successful cannabis cultivation.

If you tried LED grow lights years ago when they first appeared on the hydroponics market, you likely felt at the time that they weren’t strong enough to maximize bud size and potency from full-size photoperiod bloom-phase cannabis plants. But over the past decade or so, there have been vast improvements in LED technology.

Until recently, it was widely believed that LED grow lights were better than fluorescent, or even HID, when used in grow tents or chambers no more than 4 to 5 feet high and a few square feet in floor space, with only a few plants growing. These lights were considered great for clones, seedlings, grow-phase plants, short-height sea of green crops, and as auxiliary lighting in HID grow rooms.

Now, all that has changed.

Calculating The Value Of Your Grow-Light Investment

About 10 years ago, high-end manufacturers like California LightWorks began cropping up on the scene. According to the company’s director of sales and marketing Craig Adams, California LightWorks was founded by electrical and mechanical engineers who worked in conjunction with agricultural scientists to redesign and improve LEDs to make them more effective than HID grow lights.

Today, California LightWorks is one of the only LED grow-light manufacturers making LEDs that equal or exceed HID grow-room outcomes. But quality LED grow lights that compete with 600–1000 watt HID lights cost at least $800 and sometimes as much as $2,000 or more. Are they worth it?

To best answer that question, we’ve compared the cost of purchasing and running HID vs. LED grow lights. You can get a quality 1000-watt digital ballast, metal halide bulb, high pressure sodium bulb, and a reflector for around $600. An LED that lights the same amount of floor space as the HID setup would cost several hundred dollars more.

But initial purchasing costs don’t tell the whole story. When operating costs and the lifetime of the lights are factored in, you soon discover that LEDs give you the best value for money. For one thing, quality LED grow lights produce two or three times the effective light intensity per watt than HID grow lights do, with far less conversion to heat. Effective light intensity is the photosynthetically active radiation (PAR) spectrum ideal for cannabis.

I replace grow bulbs every two seasons; some growers replace them every season. Quality HID bulbs cost at least $60 each, so that’s $120 — one metal halide and one high pressure sodium — every time you buy fresh bulbs. Costs begin to add up.

In contrast, quality LED grow lights operate for 40,000 or more hours before significant light intensity drop-off begins. I’ve run LED lights for two to four seasons of grow phase and bloom phase per year for as much as seven years, with no significant reduction in light intensity and wavelength bandwidth.

Check out the below video from California LightWorks, which further clarifies the difference between HID and LED grow lights.

LED Lights Are Less Impactful To The Environment Than HID Lights

We’ve touched on the grossly inefficient energy conversion ratio that causes HID to waste electricity due to the creation of heat instead of light. It turns out HID heat causes more than just excessive air conditioning costs — HID bulbs are also a fire hazard, with bulb surface often approaching temperatures as high as 800°F.

What’s crazy is that some cannabis growers run HID bulbs bare, without reflectors. The blazing-hot bulbs hang from electrical wires in open space above and between plants. The bare-bulb approach is an attempt to eliminate reflector hot spots and poor reflector directivity. Unfortunately, it creates other light wastage problems, because light disperses up and sideways as well as down toward plants.

Potential regulatory health and safety concerns regarding HID lights go beyond fire and injury. Inefficient energy conversion and high running costs also mean HIDs are not environmentally friendly. If you want to reduce the negative ecological impact of your grow op, the best way to do so is to replace your HID grow lights with LEDs.

HID bulb heat damages plants in ways you might not expect. The heat is transferred to your plant canopy as direct infrared radiation, which can push leaf surface temperatures too high, burning your plants. An overheated canopy zone can’t always be fully remediated by aeration fans and air conditioning, resulting in charred leaves, interference with photosynthetic processes, and fluffy buds.

In contrast, LED chips produce relatively low heat. With high-quality LED grow lights, heat is created by circuitry behind the chips and is dispensed via heat sinks, and in some cases, by internal fans. LED grow lights do run hot, but only about half as hot as a comparable HID fixture, nor do they transfer excessive infrared into the plant canopy, because again, most of the heat is generated from the back of the circuit boards and passed on to heat sinks or small exhaust fans, rather than radiated toward the plants.

LED grow lights present a smaller risk of fire, because the entire assembly is encased in a protective housing. They won’t burn you, because your skin won’t come into direct contact with its circuitry or LED chips. The fact that LED grow lights are sealed units (HID bulbs and reflectors are often open to the air) provides additional benefits, because LED chips can’t be contaminated by foliar spray, debris, dust or insects.

Again, let’s talk HID reflectors. Even the best of them fail to send HID bulb light downward to plants. They create hot spots, which are areas where disproportionate amounts of light are reflected to small areas in the plant canopy, or dark spots, which are the opposite of hot spots.

Even the most expensive HID reflectors with the best reflective materials can absorb or misdirect light. Light wasted is electricity wasted. In contrast, LED grow lights send 99 percent of their light into the plant canopy, with virtually no reflector loss.

Not All LED Grow Lights Are Created Equal

The ability of a specific LED grow light to equal or exceed HID grow lights in yield and potency depends primarily on the manufacturer and type of LED you invest in. Another thing to be aware of is that there are two generic types of LED grow lights. One kind uses LED chips mounted in a reflective frame, with circuitry that powers and controls the chips hidden in the back. This is called surface mounted device (SMD) LED, and most LED grow lights are in this configuration.

Additionally, there are three generic classes of LED grow lights:

So, if you’re thinking of purchasing new grow lights, the main thing to remember is that an increasing number of home growers and licensed commercial cannabis growers have discovered that top-ranking LED grow lights equal or outperform HID grow lights, and also represent a reduction in electricity costs and safety risks.