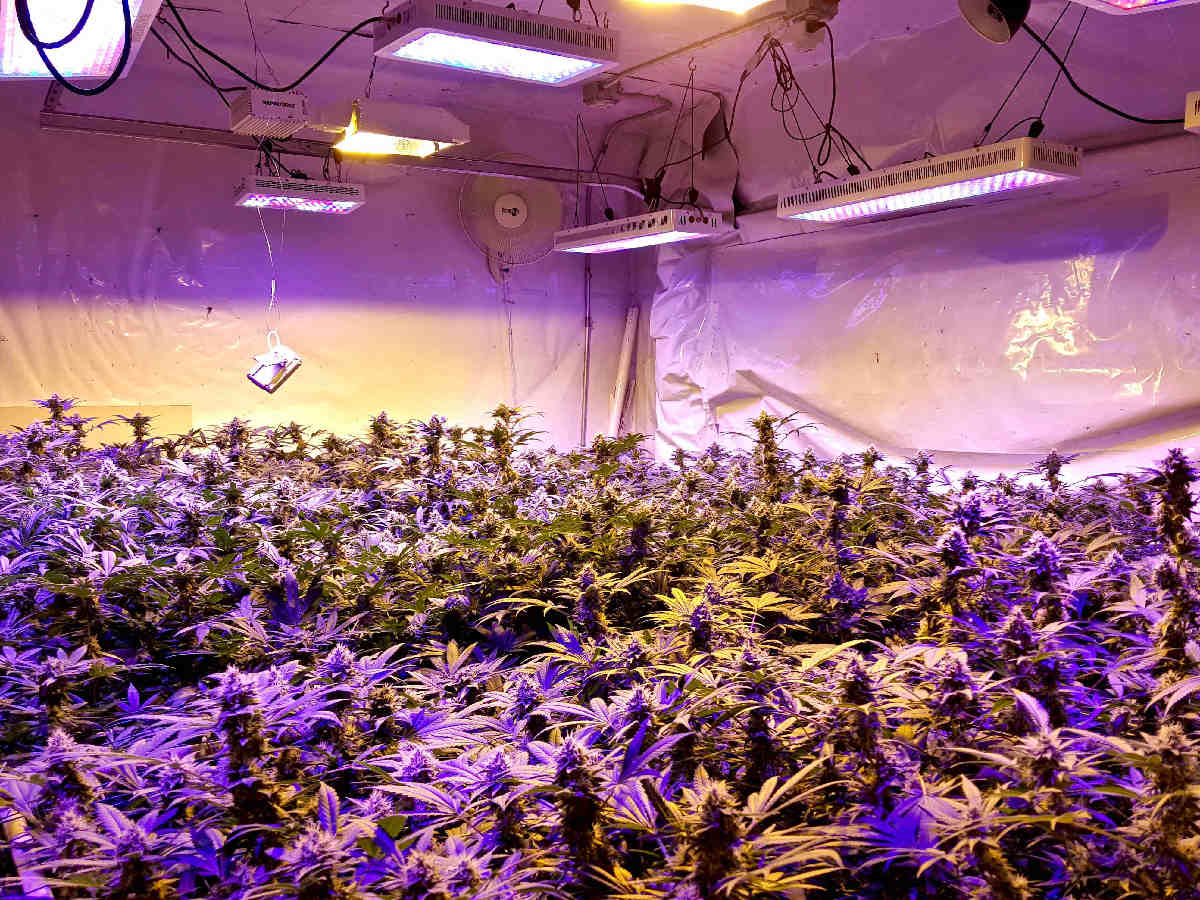 Finally, after so many years spending big money on LED grow lights that don’t deliver high yields and potent buds, a pioneering Michigan company has delivered LED grow lights equal to and in some ways better than HID grow lights!

HID bulbs wear out after 2-4 crop cycles, can burn the plant canopy, and can be dangerous to users.

Some digital ballasts for HID grow lights create radio frequency interference (RFI) used by law enforcement and/or rippers to discover where a grow op is located.

Read this article about RFI and grow op security risks.

In the past 15 years, many cannabis growers turned to LED grow lights.

The BigBudsMag.com grower/writer team has long been trying out LED units and talking to growers and manufacturers worldwide about LED grow lights.

We noted that the majority of growers conclude after switching to LED grow lights that LED units have problems that made LED not worth it when compared to HID grow lights, especially for bloom phase.

So it was exciting and intriguing when we started hearing really good things about a Michigan-based LED grow light company called Lush Lighting.

When we talked to hobbyist, professional, and commercial growers using Lush LED, we were surprised to hear that Lush LED grow lights were apparently creating as good and in some cases better than HID lighting at maximizing bud size and cannabinoid percentages in fair side by side grow tests!

That’s why we contacted Matt Johnson, the president and CEO of Lush Lighting.

Matt is one of the most knowledgeable hydroponics manufacturers we’ve encountered.

He agreed to give us super-useful information about new Lush LED that he says rivals and in some cases exceeds HID in canopy penetration, plant health, photosynthesis and other plant metabolism rates, and yield per watt.

This article is the first in a series that highlights the first LED grow lights made specifically for marijuana photosynthesis.

BBM: Matt, please tell us why, when, and how you and your team got into making LED grow lights.

MATT JOHNSON: My wife Renae and I were legally growing medical marijuana in Michigan.

We’d exceeded our electrical capacity to cool the HID lights we had at the time. We had additional space, but couldn’t add more HID lights due to lack of cooling capacity.

Our solution was to purchase LED grow lights so we could double the amount of plants we were growing.

To our disappointment, the LED grow lights were awful!

The spectrum appeared so red it seemed I’d put my plants into an environment similar to what plants would grow in on Mars.

Out of necessity, I decided we should modify the lights to make them work better for our medical plants.

It was clear to us the problem was not in the intensity of the LED grow lights, but in the spectrum they were producing.

So in early 2010, we formed a highly-professional research and design team including a biochemist and an engineer.

We formulated design ideas based on lots of academic textbook plant science research, and we modified LED grow lights made by someone else, to test their performance on cannabis.

After a year of failed attempts we were still determined to make a modernized, cutting edge LED technology that works for growers worldwide.

So I made the decision to start all over again, in a new direction.

We went back to the textbooks, determined to find what was missing from the knowledge base.

We had to discover new information about how plants take a photon and metabolize it into Adenosine Triphosphate (ATP).

ATP is the crucial molecular energy catalyst that powers all living cells.

This same ATP  is what your body metabolizes from food, and it’s an essential part of basic life processes.

We formulated several theories and began new tests in 2011.

Bloom phase has been the most difficult to fuel with LED light.

We brought another legal medical cannabis grower into our team and expanded our grow room testing to confirm the results.

We were elated to see that our new self-designed lights created fat flowers with high levels of density, weight, size, and resin production.

Confident that we could offer our modernized, proprietary, unique LED grow lights to growers everywhere, we incorporated our business in Southwest Michigan and came up with the name Lush Lighting, in June 2012.

Our company name accurately describes the response plants have to our LED grow lights.

In our next article in this series, Matt describes the fascinating history of LED grow light technology, and shows how and why his products work for marijuana growers and why other LED lights don’t.