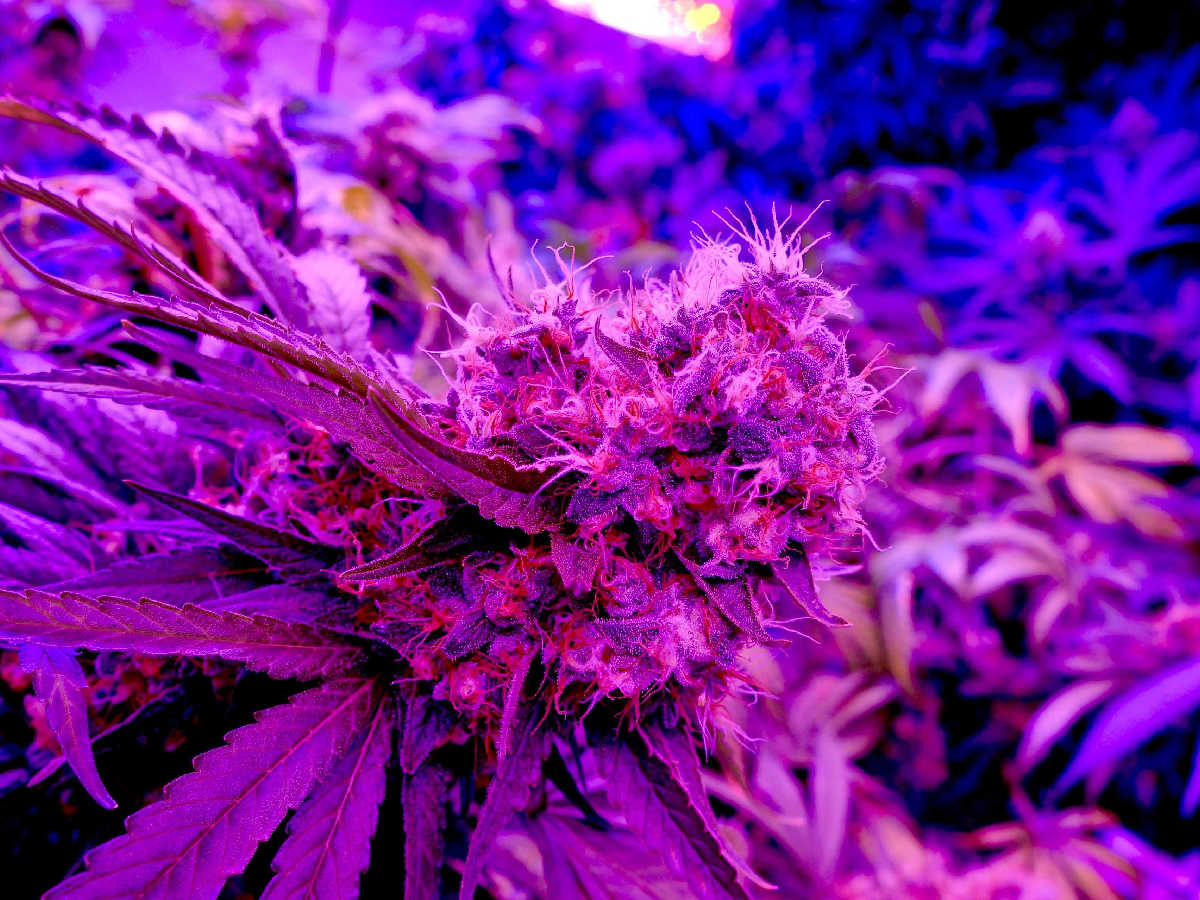 I started using LED grow lights early in 2016 after reading about them on BigBudsMag.com.

My previous hydroponics lighting equipment had been two 1000-watt HID bulbs with reflectors and ballasts.

This equipment produced an average three pounds per harvest.

My lights weren’t in cooled hoods so I had an LG split air conditioner that cost a lot to buy, install, and run.

They consume 600 watts each.

My grow program is to germinate seeds and put my seedlings under a high-output, eight-bulb T-5 for 3  weeks.

Then I transplant into 3-5 gallon smart pots and put them under a 400-watt HID metal halide for 2-3 weeks before I start bloom phase.

This time I gave them three weeks under the T-5 , then put them under one Dominator XL.

The Dominator XL instructions include a very useful diagram explaining the unit’s light coverage of PAR and lumens at various distances as well as coverage area for the light.

The 600-watt Dominator XL put out as much PAR-spectrum light as a 1000-watt HID bulb.

PAR is photosynthetically active radiation that powers your plants’ metabolism.

My grow phase plants under the LED were growing unusually squat and wide, without much vertical growth, because they were hiding from the light.

The XL was too strong for my three-week seedlings until I raised it nearly four feet above them.

The Dominator XL manufacturer states their LED grow lights are the only ones that deliver the right wave lengths to increase photosynthesis, nutrients uptake, harvest weight, and cannabinoid and terpenoid production.

I found their statement is true.

I expected I’d lose eight square feet of garden area and about 2-3 feet of vertical penetration compared to HID.

Instead, I got 14-16 square feet of intense coverage from one 600-watt Lush LED grow light.

Photosynthesis was revved up, creating dark green leaves and brown leaf spots… a sign of calcium and magnesium deficiency.

Magnesium is essential to photosynthesis.

So if you drive plants with the Lush LEDs you amp up photosynthesis and your plants require more magnesium.

Within fives days the magnesium deficiency leaf problems faded away.

With the lights higher and magnesium added, instead of hunkering down to get away from my LED grow lights, my plants rapidly gained height.

Nutrients uptake was off the charts.

I added my second LED grow light after six weeks in veg, and flipped to flowering.

Stretch was about 25% less, flowers came on 3-5 days faster, there were more budding sites than usual.

One Dominator XL generates about 67% as much heat as one 1000-watt HID high pressure sodium, but delivered more PAR and more lumens than a quality 1000-watt HID HPS.

The resin percentages, taste, and scent were more intense than HID-grown crops of the same strains.

I shaved a week off my bloom phase because the LED made my buds ripen faster.

I paid much less for electricity for lights and cooling.

The only extra expense I had was the bottle of Sensi Cal Mag Extra.

My conclusion: Lush Dominator XLs are the most efficient grow lights you can get, and have multiple advantages over HID including double-ended.

The only downside is I now have a nine HID bulbs, some of them never used, several reflectors, and several ballasts to sell!

If you adjust your feed program and work with your light height to optimize dosage of the immense PAR power of Lush LED, you do better than HID while using less electricity and generating less heat.