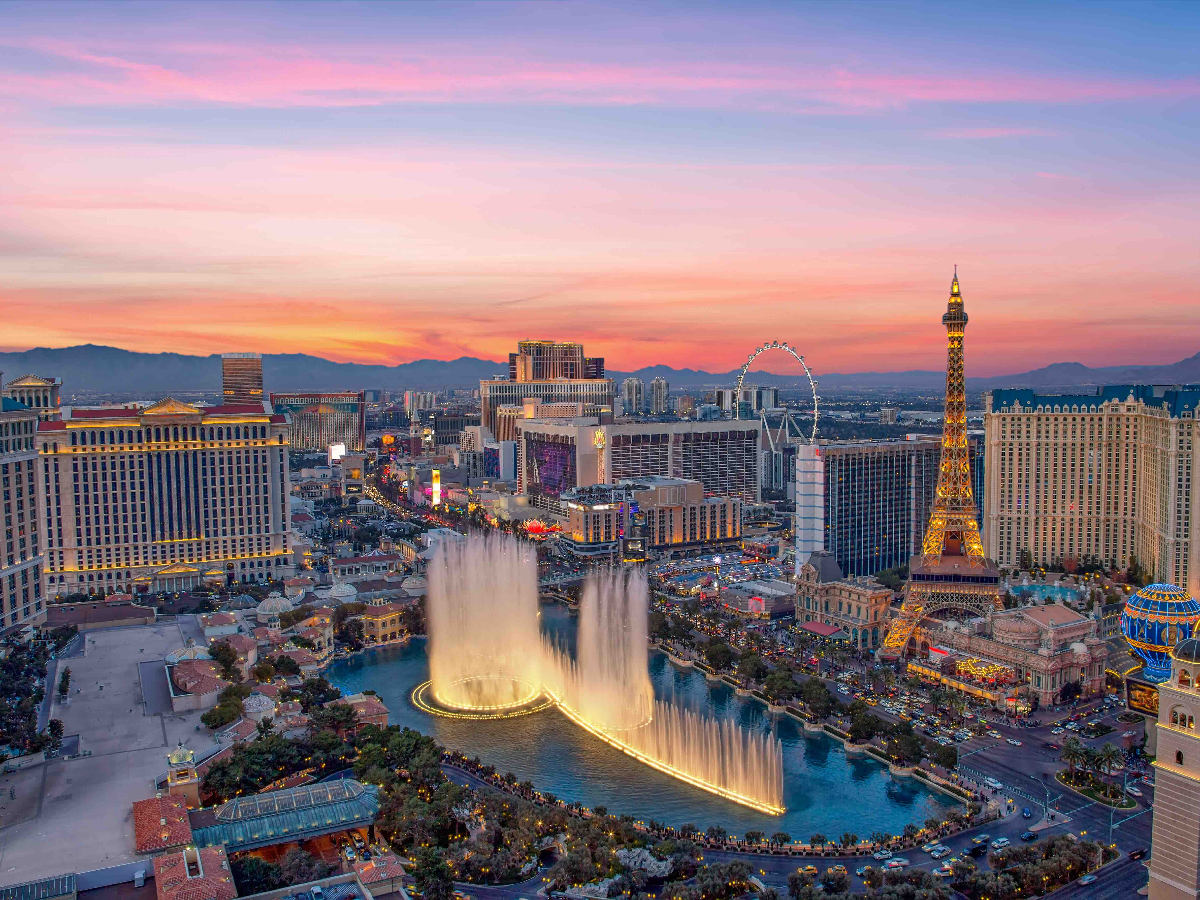 Nevada has a unique cannabis scene that is contextually apt, considering its long and storied history of the legalization (and taxation) of activities shunned in other parts of the world. Bearing down closer and closer to the casinos, in 2017, just a few months after recreational sales began, the shops was raking in an average of more than $32 million per month, with 25 percent going to the state, according to Forbes. Compared to the gaming and alcohol industries’ current monopoly in the casino capital, this figure certainly equates to a smaller pile of cash, but one worth investing in, cultivating, and bringing to consumers.

However, according to a report released by the American Gaming Association, while the gambling tax collected in Nevada has in recent years fallen behind the likes of non-recreational cannabis states New York and Pennsylvania, cannabis could soon be bringing in state revenue that gaming is failing to capture.

While Nevada remains one of the top beer consumers (as of 2017, the annual per capita consumption was 33.4 gallons of beer), this is likely due to the state’s alcohol laws, which allow for public consumption. As the city code continues to outlaw cannabis consumption in public spaces and in hotels, with 40 million visitors to Vegas in 2017 alone, this outdated legislation could prove a limitation for both cannabis businesses and taxes that the state is likely to amend.

The Volume Of Nevada Cannabis Visitors

When you visit Las Vegas, you immediately notice its dozens of dispensaries, and though none are found on the famed Strip, they’re easily accessible for tourists and locals alike. Clearly, major marijuana business is taking place in Sin City, and at 10 percent tax per retail sale, the state is cashing in big.

The pot shops on West Flamingo Road, located west of the Strip, have a boutique-like feel, with large waiting areas to accommodate customer rush hour. In true Vegas fashion, most shops are open 19 hours per day, some as much as 24 hours. At Exhale Nevada, one budtender said double shifts are a common occurrence. While on one afternoon visit, the retail space wasn’t particularly crowded, it’s apparent that shifting large volume of product is not a rarity.

Like Washington state, product is not weighed for the customer, but rather, comes prepackaged in vacuum-sealed bags. This means the sample buds in locked sniffer jars have to be potent; they sometimes represent an entire harvest at point of purchase. 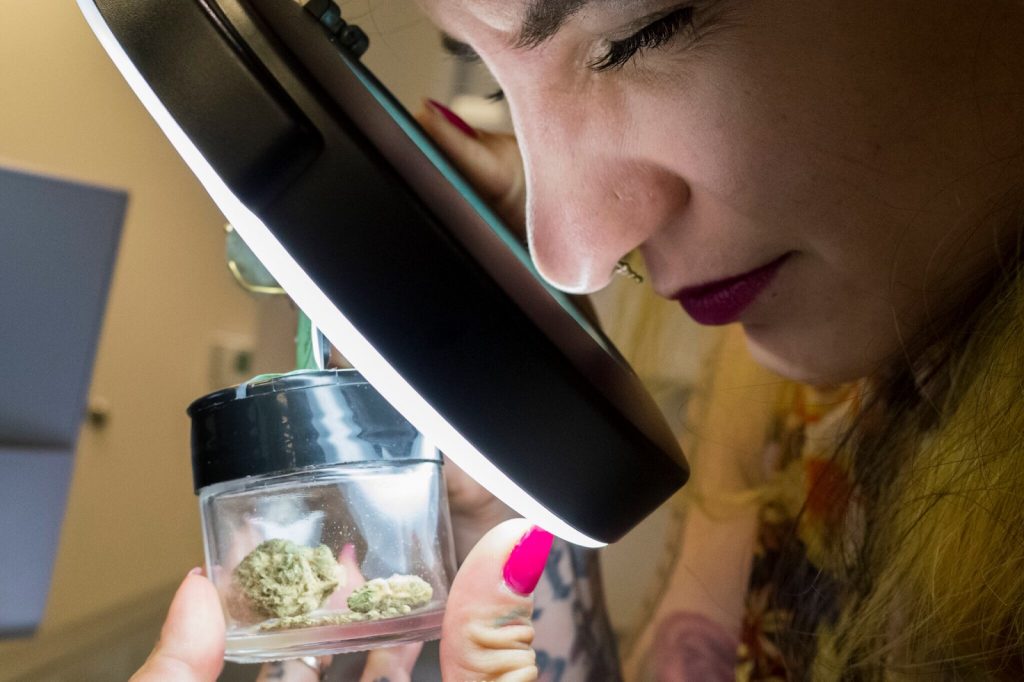 Many budtenders and operations staff agreed on one point: Las Vegas is a sativa town. Being a place of stimulation and indulgence, this does make sense. After all, having a head high from a sparky sativa can make things a little intense, but a body high won’t get you far in the dizzying current of people, food, money and booze.

NuLeaf dispensary is located close to the Las Vegas Strip and near the airport. The result? Tourist customers aplenty. NuLeaf has a classic apothecary feel, and the products range from premium flower, to unique topicals and popular drinkables like Dixie Elixirs. We asked NuLeaf marketing director JC Coats why sativas are so popular in Vegas.

“Vegas is a place you go to have fun and be active,” explains Coats. “Because sativas are more active, they fit into [a] visitor’s travel itinerary better than other strains. I also think that in general, people like sativas because they provide a more unique experience than their sedative indica counterparts.”

Having a slower indica could potentially kill your vibe, if staying out past 4 a.m. is your bag (which, if you’re in Vegas, it likely is). Mikel J. Alvarez of Blüm dispensaries thinks that the city’s hours of operation play a major role in sativa’s stronghold on the Strip.

“Tourists coming to Vegas never sleep! They are here for a great time, and a nice, pure sativa is a great complement to the time they are here.”

Alvarez notes that the L’Orange strain by Cannabiotix, and BlackJack by cannabis cultivators Tahoe Hydro Co, are among the top-selling strains at Blüm right now. 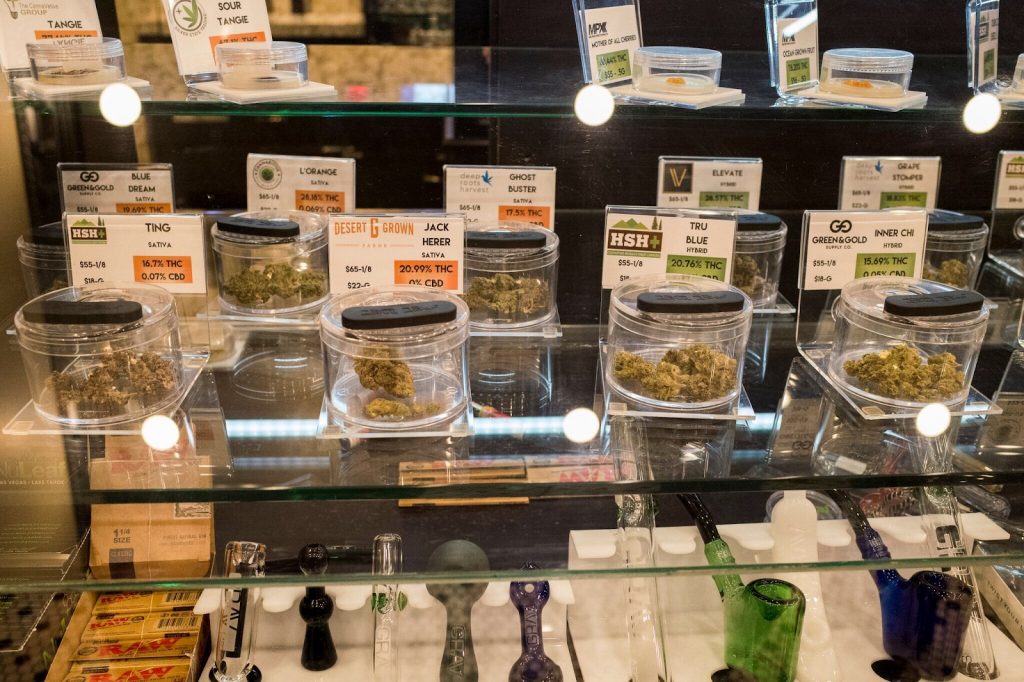 A display of sniff jars at NuLeaf dispensary. (Image courtesy of Maria Penaloza.)

In Nevada, Cannabis Is Grown Indoors

Though Nevada is a state with a desert climate and plenty of mountains, things do indeed grow well out in the open. Despite all the sun and occasional mild temperatures that could allow for a short outdoor season in greenhouses, virtually all grow operations in Nevada are located indoors. This is vastly different to the grow style of other legal states, with outdoor super grows and greenhouse ops common in California and Oregon.

In Nevada, the competition for not only super-potent cannabis, but for perfect-looking buds is very high, which means there are few different quality levels and grades available on the retail market. It’s either dank or bust. As a consequence, new consumers are given a clearer selection and hopefully an agreeable experience. Coats of NuLeaf says this has to be bolstered by a smart sales team.

“For dispensaries located right around the Strip, the overwhelming majority of customers are tourists. That means that a lot of education has to be done in each transaction. For a lot of these visitors, this is not only their first time in our store, but their first time in any marijuana dispensary.”

Nevada’s stricter regulations also mean that not as much product makes it into stores, due to testing and other legislative restrictions. Blüm’s Alvarez tells Big Buds Mag, “Nevada does not have as many strains as the rest of the country; let’s say California. Also, strains that are called one thing in Colorado might not be the same as they are in Nevada. Not a bad thing, just different.” 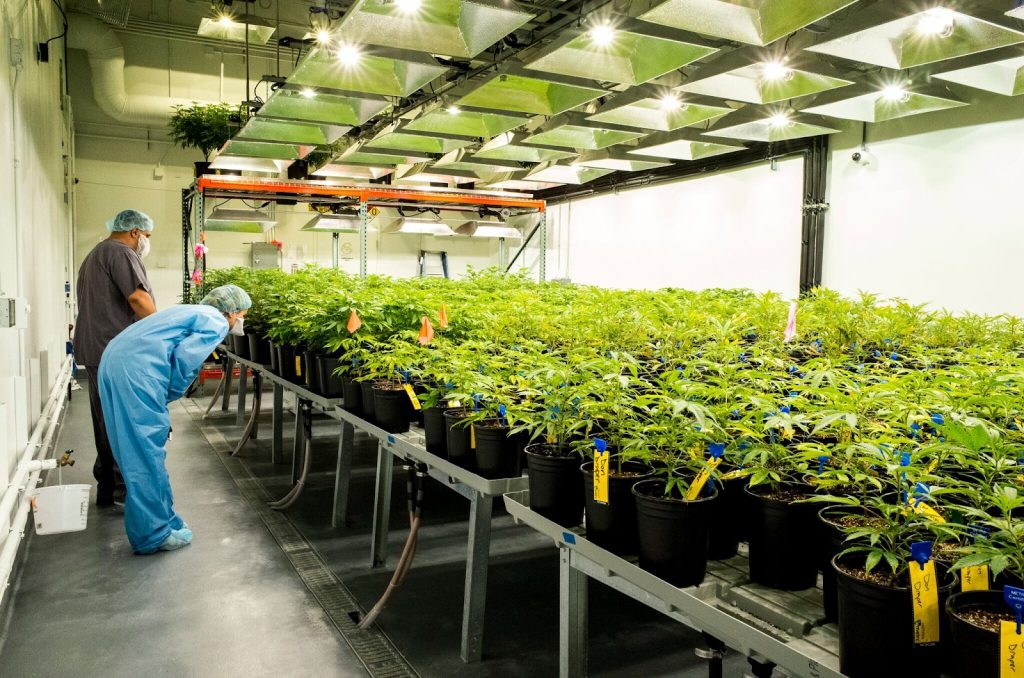 GFive Cultivation is a medical marijuana facility, licensed to produce in the state of Nevada. (Image courtesy of Maria Penaloza.)

Cultivating plants and cultivating customers in Las Vegas doesn’t have to be a gamble — each brand has its share of successes and sorrows while adjusting to the ever-evolving state regulations, as well as the continued fear of federal interference. If you’re looking to plant your farm’s flag in Nevada, or just looking to find the best of the buds, keeping an eye on the trends provides valuable insight into what newer consumers want.

Reflections On Grow Room Reflective Materials: Mylar, Panda Plastic Or Flat White Paint?
Seeds For Weed And Clones For Cones: Is One Really Better Than The Other?