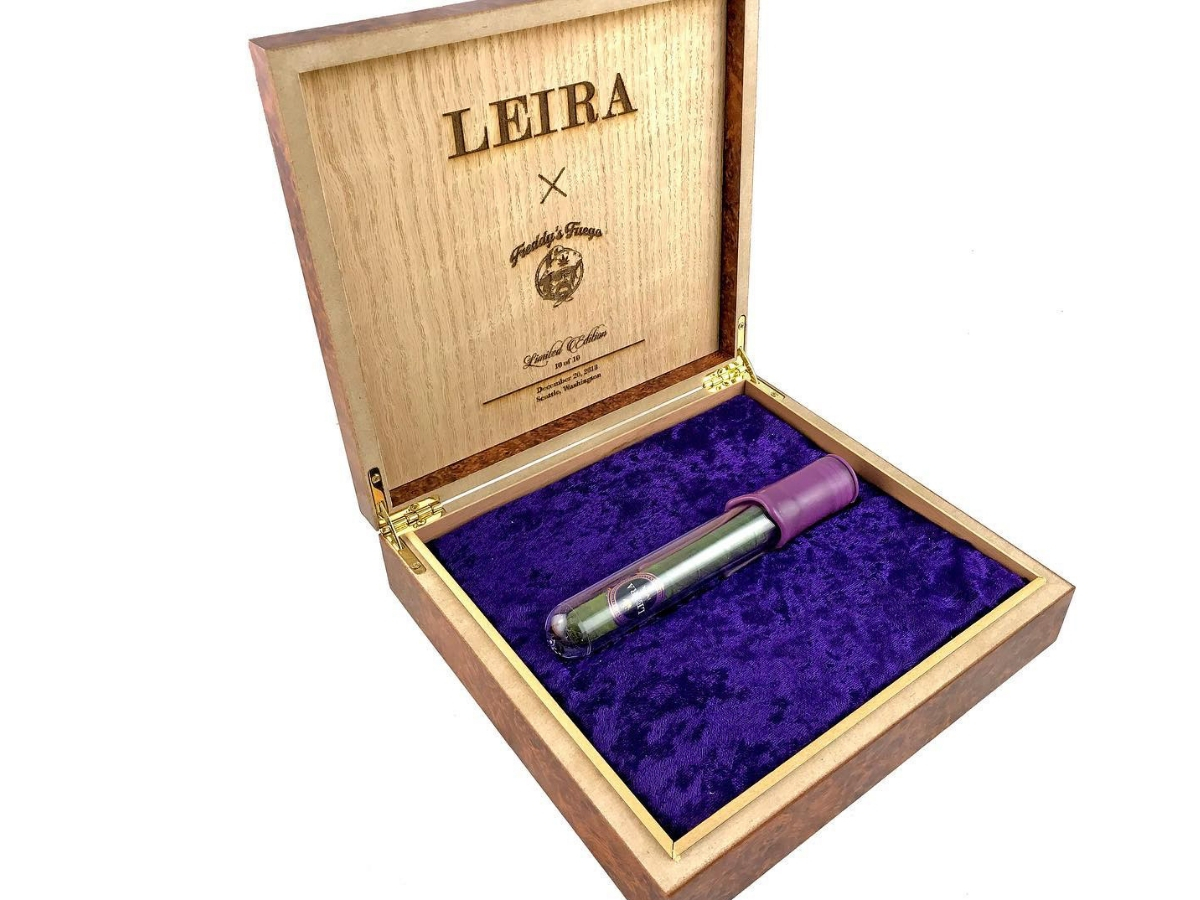 On a quiet winter evening, just days before the turn of the new year, history was made at one of Las Vegas’s largest mega dispensaries.

Of the average 3,000 daily shoppers at NuWu Cannabis Marketplace in Sin City, only about 20 were walking the floor of the 15,800-square-foot shopping area shortly after 5 p.m. on Dec. 28. Meanwhile, in a back room, Los Angeles resident Brandon Hawkins stood with $11,000 cash, divvied into six rubber-banded stacks of $20, $50 and $100 bills.

Hawkins, 36, arrived in Las Vegas from LA that morning to make the largest legal purchase of a cannabis product anywhere in United States. Laying in a wood-grain box on top of a purple felt display cushion, the Leira Cannagar contained 24 grams of locally grown cannabis wrapped in hemp flower, then covered with consumable 24-karat gold leaf. Hawkins, owner of The Hudson restaurant in West Hollywood, said he traveled to Las Vegas on behalf of a business partner whose name he wouldn’t divulge.

“We’re going to have a hell of a New Year’s party,” Hawkins said at the time.

The six-inch mega joint was loaded with Pure Haze flower, a sativa-dominant hybrid grown by Las Vegas-based cultivator Virtue. Ariel Payopay, founder of Washington-based Leira, says the cigar took more than two hours to wrap in its hemp and gold-leaf exterior, adding that the gold coating decomposes into ash when smoked and is safe for consumption.

The price of the Las Vegas cannagar topped the price of another Leira sold last summer in Seattle for $10,000. Industry analysts say that the sales of these two products illustrate an increasing nationwide demand for luxury marijuana products. As the plant becomes more mainstream, more customers — especially wealthy ones — are demanding custom, high-end cannabis amenities.

Omar Romero, a 28-year-old software engineer in the Los Angeles suburb of Bellflower, is one of just a few dozen cannabis aficionados across the world to own a $750 silver-plated cannabis grinder that doubles as a necklace. He purchased the limited-edition Vetements grinder necklace during a trip to France last summer in hopes of bringing “something different” to a US metropolitan area where “looks are everything.” When closed, the small grinder resembles a pendant and is easily disguisable as a mere necklace.

Romero, who imbibes daily with a CBD-rich flower strain called Cannatonic to deal with back pain and assist with concentration, says that wearing his fashionable silver grinder at all times of the day has provided an added convenience in the event he has to grind and roll flower away from home.

“It was worth every penny,” he insists. “In LA, we’re always looking for the latest and greatest. Buying this was my way of combining two of my greatest passions — [cannabis] and fashion.”

Vetements assistant designer Veronique Bourbeau says only 100 silver grinder necklaces were produced to maintain a level of exclusivity for the product. That trend is in line with the company’s hundreds of other luxury fashion products such as swimsuits, track jackets, shoes and T-shirts. The idea to include cannabis products in the company’s inventory began after the 2016 US presidential election, when four states legalized recreational cannabis, Bourbeau says. More than a dozen Canadian buyers and several others across Europe have also purchased the necklace.

“We treat cannabis, and will continue to treat it, like a mainstream product,” Bourbeau says.

A 2018 survey of 900 cannabis consumers with full-time jobs found that luxury cannabis products were “a preferred alternative” to more typical marijuana products found at legal dispensaries. Also of note in the survey conducted by New York-based analytics firm Miner & Co. Studio, only 32 percent of surveyed participants said they questioned the quality of everyday dispensary cannabis sold in legal states, while 84 percent said they’d pay greater prices for luxury cannabis products if they knew the products were of a higher quality than those of dispensaries.

“The growth in the luxury market comes primarily from a desire to stand out, to have the finest products and to be different,” explains Francesca Gallo, a Miner & Co. Studio cannabis analyst. “But there’s also a number of people who just want the best quality marijuana and accessories for using it.”

A February 2018 report from Arcview Market Research and BDS Analytics projected North America’s legal cannabis industry will expand from $9.2 billion in 2017 to $57 billion by 2027.

Cannabis industry analyst Stuart Rolfe of Toronto-based Veritas Investment Research estimates that expansion will lead the way for a larger market of luxury products that will dwarf even that of last month’s $11,000 cannabis cigar purchase in Las Vegas. Besides specialty consumption products like cannabis cigars, vaping cartridges, and paraphernalia like grinders, pipes and bongs, the cannabis luxury market could soon include more significant items. Rolfe says luxury hemp- and cannabis-based homes, motor vehicles and watercrafts could be a not-so-distant reality.

Key West, Florida-based Bruce Dietzen built the first hemp-based sports car in 2016 as a new kind of environmentally friendly vehicle. Made of 100 pounds of hemp and built on a Mazda chassis, the red Renew-brand sports car features a resin coating that establishes a hard, plastic-like body that weighs less and is more dent-resistant than traditional steel automobile frames. For a price of $40,000, Dietzen hopes the car will soon be available to the public.

While the hemp used in Dietzen’s Renew prototype is made with plants imported from China, last month’s passage of the US Farm Bill to legalize hemp across the country makes his dream of mass production more possible, he claims. Dietzen says he’s keeping his fingers crossed to make the Renew car commercially available by 2020.

“It’s a win-win for everyone involved,” he says. “It’s an example that this plant has so many different functions and it truly is our future.”

Cannabis Confection Or Sativa Syrup? How To Make Your Own Cannabis Sugar At Home
After 20-Plus Years, California’s Medical Marijuana Collective System Is About To Get Disrupted