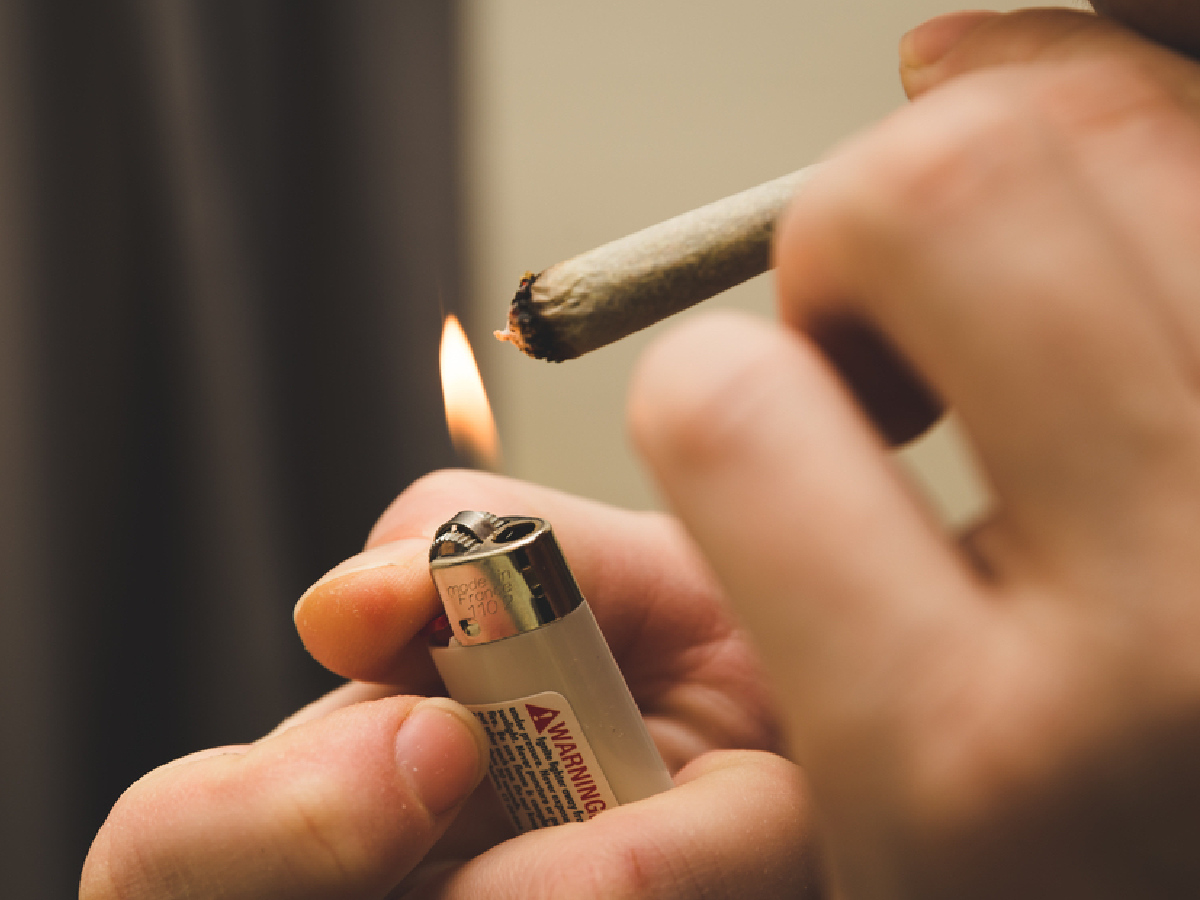 Frank Hawkins has achieved more than most in his 59 years on this planet. A Super Bowl-winning running back with the NFL’s Raiders franchise in Oakland and Los Angeles, in his post-football career, he went on to become a Las Vegas city councilman, entrepreneur, international traveler and, most recently, a legal cannabis dispensary owner.

But of all of the achievements and unique opportunities in his life, Hawkins said the forthcoming one is among the sweetest. Six months ago, when he started believing that cannabis lounges had a chance of approval in Las Vegas, he got to work transforming an empty 7,800-square-foot room on the second floor above his Nevada Wellness Center dispensary into a larger-than-life mural for history’s modern marijuana heroes.

The upstairs facility, which includes 12 private rooms, has pictures of cannabis supporters Abraham Lincoln, Barack Obama, Bill Gates and Albert Einstein installed among portraits of modern-day activists like Jack Herer and Rick Simpson. LED lights adorn the windows of rooms designated for everything from virtual reality gaming and dominoes, to a recording studio and a boardroom for corporate meetings.

The 420-friendly space provides convenient access for the everyday cannabis consumer to enjoy the plant, as well as the privacy for Hawkins’ wide network of athletes, entertainers and other celebrities to enjoy their own discreet areas in which to consume.

On May 1, Hawkins’ consumption lounge dreams cleared perhaps the largest hurdle in the road to becoming a reality.

After nearly 20 public meetings, council workshops and hearings over the past year and a half, last week the Las Vegas City Council voted 4–1 to approve an 11-page ordinance for marijuana social-use lounges. However, there is a caveat: Local licensing for the cannabis lounges will be available only to owners of the 12 open dispensaries on city property and an additional 10 cannabis stores slated to open in Las Vegas by the end of the year.

The final ordinance, amended several times since it was first proposed in December 2017, allows for food and nonalcoholic beverage sales. However, these lounges must be registered as their own separate indoor facility — with no windows or outdoor access — and can’t be located within a dispensary. To appease the lucrative resort and gaming industry, which began lobbying at the 11th hour, the lounges can’t be located within 1,000 feet of a Las Vegas property that offers gaming. Just about everything else is fair play.

Councilman Bob Coffin, a longtime state and local politician who’s retiring this year at the age of 76, was influential in proposing and finally pushing through the ordinance. But even Coffin had his doubts as recently as the last week of April. Surprised that so many other council representatives joined him in voting in favor of the ordinance, Coffin said he was “relieved.”

“It’s where the industry is going,” he said. “We needed to provide a place where people could legally use [cannabis].”

“We had over 40 million tourists coming to Las Vegas, a growing number of them buying marijuana, and absolutely nowhere for them to legally use it,” Mueller said, according to Leafly. “People were consuming illegally on the streets, in their cars, parking garages and hotel rooms.”

Before last week’s vote, Mueller stood in front of the city council with one last plea. Nevada’s legislature earlier last month had axed a bill to permit the state to license the lounges, so it was up to city officials.

“We want to get in a controlled environment,” Mueller said. “We’ve got to give people a legal way to go out and consume something we’re selling to them and we’re collecting taxes on.”

An additional 38 dispensaries located in North Las Vegas, Henderson and unincorporated Clark County, which includes the Las Vegas Strip, are excluded from the ordinance. These cannabis stores will have to wait until their respective local governments vote separately to approve measures before they can open lounges.

But for Mueller, whose dispensary is located on city land just north of the Strip, the near-exclusive opportunity represents a chance to lead. While the new lounges won’t open for at least four months, per city spokesman Jace Radke, Mueller, like Hawkins, has most of his plans figured out for when that time comes. 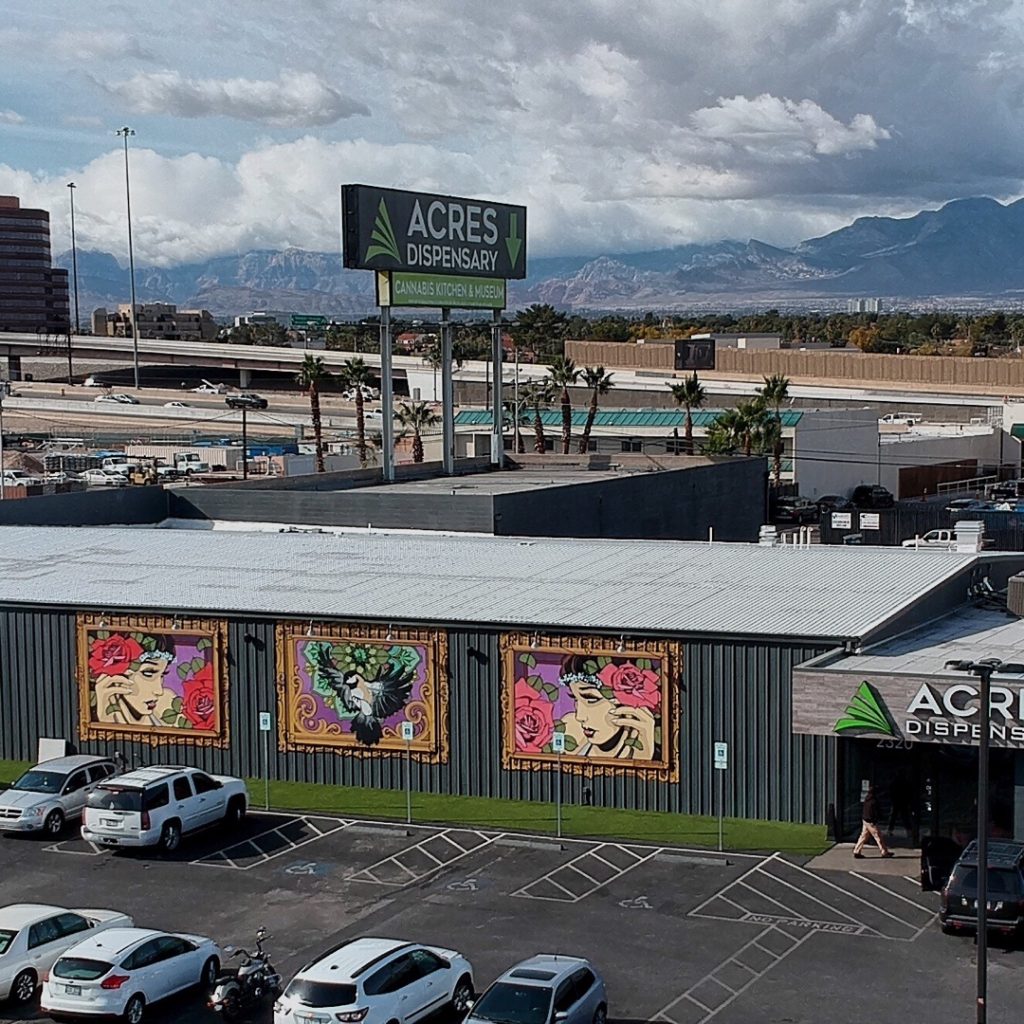 Acres Cannabis is one of a handful of Vegas dispensaries who will now apply for a consumption lounge. (Image courtesy of @acresdispensary)

An untapped 8,000-square-foot room, located at the back of Acres, will soon be turned into a makeshift concert venue, massage parlor, yoga studio, private event center and social consumption lounge where cannabis consumers from all walks of life can enjoy the plant together, he said. Because the lounges can’t be in the same facility as a dispensary, Mueller, like Hawkins and other owners planning to open a lounge, will have a separate address for the consumption facility — something as simple as labeling it “Suite B.”

Mueller said that’s “just the beginning” of his plans for Acres’ lounge. For competition’s sake — at least seven to eight other dispensaries in the city will likely open a lounge — he said he’s leaving most of the details of his new facility for the public to see when it opens.

The Las Vegas Paiute Tribe, which operates the 15,800-square-foot NuWu Cannabis Marketplace located on tribal land near Downtown Las Vegas, are the lone possible beneficiary of the new ordinance outside city limits. A vacant 11-acre plot of tribal land next to the dispensary will become a consumption lounge “when the time is right,” said tribal chairman Chris Spotted Eagle back in March.

The tribe can play by its own rules, thanks to a special pact with the Nevada Governor’s office allowing the Paiutes to bypass federal law on negotiations related to marijuana commerce. The Paiutes could have opened a lounge shortly after that bill passed during the 2017 state legislature, but similar to waiting to open its mega-dispensary, chose to move at the same pace as the rest of the industry for lounges, too. Reached Saturday, a Las Vegas Paiute representative said the tribe was not ready to comment.

But not everyone was a winner in Las Vegas’s latest marijuana jackpot.

The restrictions disappointed owners of at least a couple of strip clubs in the city, who hoped an all-encompassing ordinance would allow their facilities to also have a stake in the almost certainly lucrative business opportunity.

Rick Marzullo, manager of the popular fully nude Little Darlings Gentlemen’s Club north of the Las Vegas Strip, said his nightclub had reserved a 3,000-square-foot space, complete with a stage, polls and a buffet area to offer patrons the chance to consume cannabis as part of their Little Darlings experience.

Limiting the venues to cannabis dispensary owners in the city only furthers their monopoly over the market, he argued.

“The ordinance calls them social-use lounges, but I can’t think of a more social place than a strip club,” Marzullo said. “It’d be a perfect match.”

Ditto for the Palomino Club, another strip club near Downtown Las Vegas. Palomino Vice President Thomas Adams said the club had a 4,200-square-foot back room, complete with lavish couches and private suites, ready to open as a cannabis lounge. He acknowledged being snubbed in the final ordinance was not surprising, but added it was “still very frustrating.”

Among other Las Vegas facilities snubbed on the marijuana ordinance included bars and restaurants near Fremont Street, a popular tourist area located off the Strip that welcomes more than 18 million visitors each year. Local business owners said they hope the ordinance, which can be amended after 12 months, will soon encompass alcohol sales and expand to include non-dispensary owners.

“Marijuana is too high in demand to restrict everything about it to a small group of businesses,” Adams said. “It’s only fair at this point to open it up.”

Game Of Clones: 16 Tips To Your Best Cuttings, Increased Production
How Dispensaries Can Become More Accessible For Medical Marijuana Patients