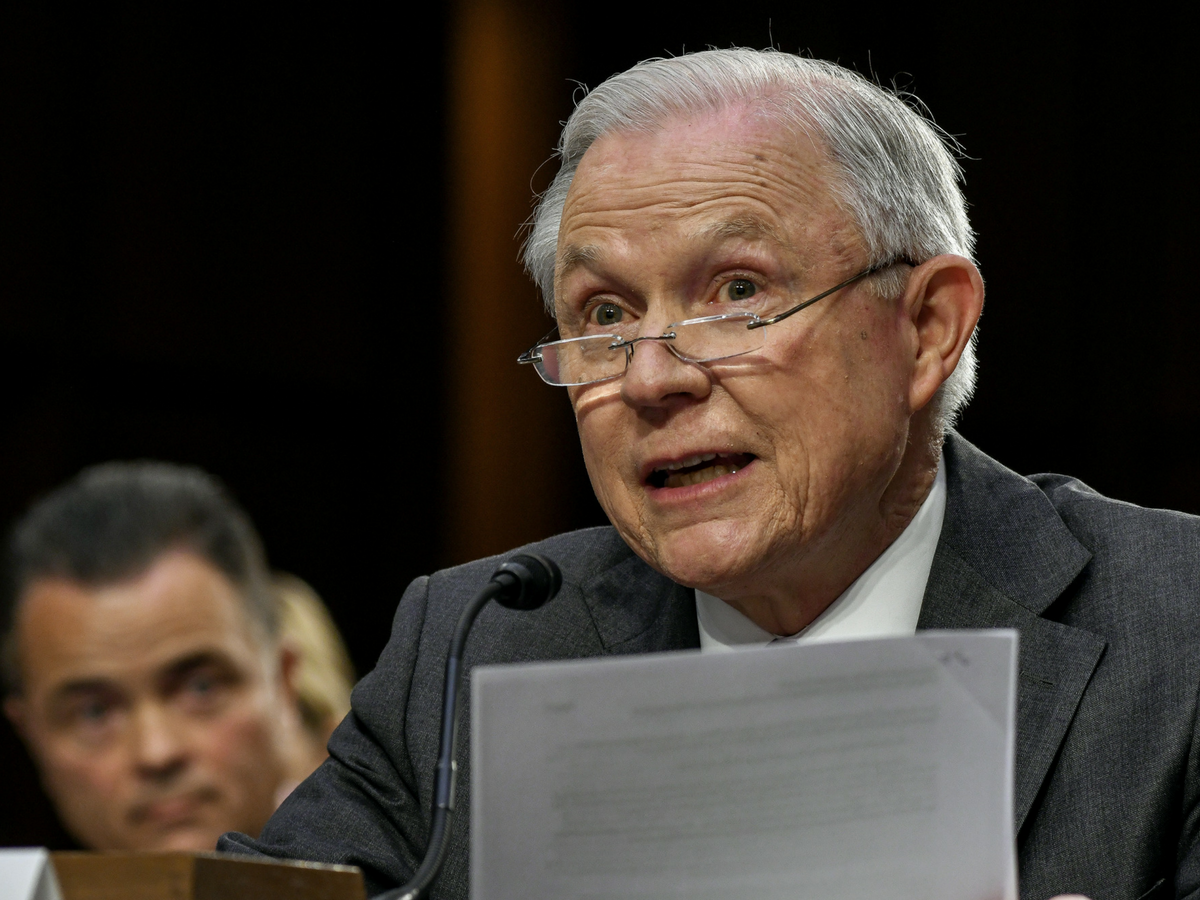 The US politician who once claimed that members of the Ku Klux Klan “were OK until I found out they smoked pot” is now taking fire from all sides — chief among them a lawsuit filed against him concerning legalized medical marijuana and an individual’s right to effective medicine.

US Attorney General Jeff Sessions was personally named as a defendant in the lawsuit filed in a federal district court in New York City earlier this year. Plaintiffs in the multiparty suit include two children, an NFL player, an Iraq War veteran, and a nonprofit cannabis support group.

At the heart of the matter are basic rights of access to treatment for life-threatening illnesses and the constitutional right of social equality. New York’s Cannabis Cultural Association, a nonprofit helping marginalized and underrepresented communities engage in the legal cannabis industry and fighting for criminal justice reform, co-filed the suit.

Since 1971 and the US federal government’s war on drugs — in which one swipe of a pen designated cannabis a Schedule I substance with a “high potential for abuse” and “no currently accepted medical treatment” — the misguided campaign has stood as an impediment to millions of patients gaining legal access to medical cannabis. It has also unfairly affected minority groups, who have been disproportionately prosecuted for its use.

Long proven as a viable palliative remedy for patients, marijuana’s lingering Schedule I federal designation has for nearly 50 years lumped pot in with heroin and LSD, and termed it as more dangerous than drugs classed as Schedule II such as cocaine and crystal meth.

Criminalizing the use of cannabis across great swathes of the nation has continually stigmatized the substance as a drug of thugs, rather than one of people in need of medical attention.

The lawsuit against Sessions, which also names as a plaintiff the Drug Enforcement Administration’s former acting director Chuck Rosenberg, is being filed challenging the constitutionality of the Controlled Substances Act (CSA), the federal drug policy that regulates the manufacture and distribution of controlled substances in the US.

While 29 states and the District of Columbia have legalized marijuana use to some extent, its continued baffling prohibition at the federal level can be principally credited to AG Sessions’ obstructionism. His reluctance to recognize hard science, as well as the will of the American people — who have overwhelmingly approved the herb via state-approved initiatives — has caused undue suffering for countless innocent people.

Sessions, as the top lawyer of the US government, holds the power to effect change with the Schedule I designation.

A Matter Of Health

Twelve-year-old Alexis Bortell suffers from seizures brought on by epilepsy. She is one of the five plaintiffs suing the attorney general for his continued enforcement of the CSA.

Where other medications have proven less effective at controlling Bortell’s seizures, medical cannabis has helped to drastically decrease them. Her parents, both military veterans, opted some years back to uproot their family from their home in Texas and move to Colorado, where weed is legal and more readily available.

“As the seizures got worse, we had to move to Colorado to get cannabis,” Alexis told local news station Fox31 Denver.

Bortell’s situation is reminiscent of the 2013 landmark case involving Charlotte Figi, a girl who was given cannabis extracts for her seizure disorder. The case represented a flashpoint in the fight for medical marijuana, and particularly cannabis oil treatment for children across the US. With Figi suffering from the age of three months old with Dravet syndrome, a severe form of epilepsy characterized with frequent and prolonged seizures, at the age of five she was given cannabis extract that greatly lessened her seizures. Her usage of that marijuana strain (later named Charlotte’s Web in her honor) was first featured in the 2013 CNN documentary Weed with neurosurgeon Dr. Sanjay Gupta.

Since the airing of that segment, many families in similar predicaments to the Figis and Bortells have flocked to legal cannabis states like Colorado in search of relief for their ill children.

While Alexis is better off receiving legal treatments in Colorado’s recreational cannabis system, the Bortells find their mobility greatly impaired and are prohibited from traveling legally with marijuana outside of the state to visit Alexis’s grandparents in Texas. They’re also unable to make full use of their military benefits for treatment, due to the federal conflict with cannabis’s Schedule I designation.

AG Sessions has made himself a lightning rod in this national debate with his very public quips deriding cannabis as a public menace, saying that “good people don’t smoke marijuana” and cannabis presents “a very real danger” to society. In reality, the opposite is true, evidenced by countless anecdotal stories of everyday patients’ lives made better by the plant, as well as hard scientific data as support.

A 2016 study in Israel published by the British Epilepsy Association reported that “CBD treatment yielded a significant positive effect on seizure load. Most of the children (66/74, 89%) reported reduction in seizure frequency.”

And a study published just this month in the respected New England Journal of Medicine supports the efficacy of the drug to lessen childhood seizures. The double-blind, placebo-controlled study, described by Scientific American as the most scientifically rigorous type of investigation possible, stated that “medical researchers have confirmed what some desperate parents have been claiming for years—that a nonpsychoactive component of marijuana known as cannabidiol (CBD) can reduce epileptic seizures in some children.”

A Matter Of Human Rights

NFL player Marvin Washington has been a vocal medical marijuana advocate for years, seeking to change the way the league and the country views the use of cannabis. The former New York Jets defensive end also joined the suit against AG Sessions.

The lawsuit cites racial origins of anti-cannabis laws, stating that prohibition “arose out of the enactment of legislation underwritten by illegal racial and ethnic animus, and implemented and enforced at the federal level by those who have chosen to disregard its scientific properties and benefits, and have been motivated by hatred and outright bigotry.”

A 2016 report by Human Rights Watch and the American Civil Liberties Union, and reported in The New York Times, described that “a disproportionate number of those arrested are African-Americans, who smoke marijuana at rates similar to whites but are arrested and prosecuted far more often for having small amounts for personal use.”

Those lopsided arrests are typically a product of law enforcement sending large numbers of officers to neighborhoods that have high crime rates, which results in petty marijuana possession arrests. Such incarcerations often snowball in the court system and devastate lives.

Iraq War veteran Jose Belen, who suffers from post-traumatic stress disorder, joined the suit against Sessions as well. Treating his PTSD with medical marijuana means that Belen can’t legally talk with Veterans Affair doctors about cannabis use — again, the federal conundrum — and doesn’t have the freedom to safely enter a military base or travel by airplane with medical cannabis. Like the Bortells, the federal conflict puts Belen — who actively served in a warzone for 14 months — at risk of incarceration for possession of a Schedule I illegal drug.

The list goes on and on — and Sessions has to answer those pleas by average Americans, none of them thugs, who seek lifting the archaic Schedule I ban on cannabis to receive legal remedies.

Toddler Jagger Cotte, the youngest individual listed on the suit, is perhaps the most poignant example of the efficacy of medical cannabis.

Diagnosed with Leigh syndrome — characterized by progressive loss of mental and movement abilities and typically fatal within two to three years — Cotte’s life has been extended through cannabis treatments. He is now six years old, has more than doubled his life expectancy, and deserves an opportunity to extend his life even further.

Train Your Brain With A Strain: How Growing Weed Kicked My ADHD To The Curb
Beyond Indica Vs. Sativa: Customizing Your Cannabis High With The Right Terpenes