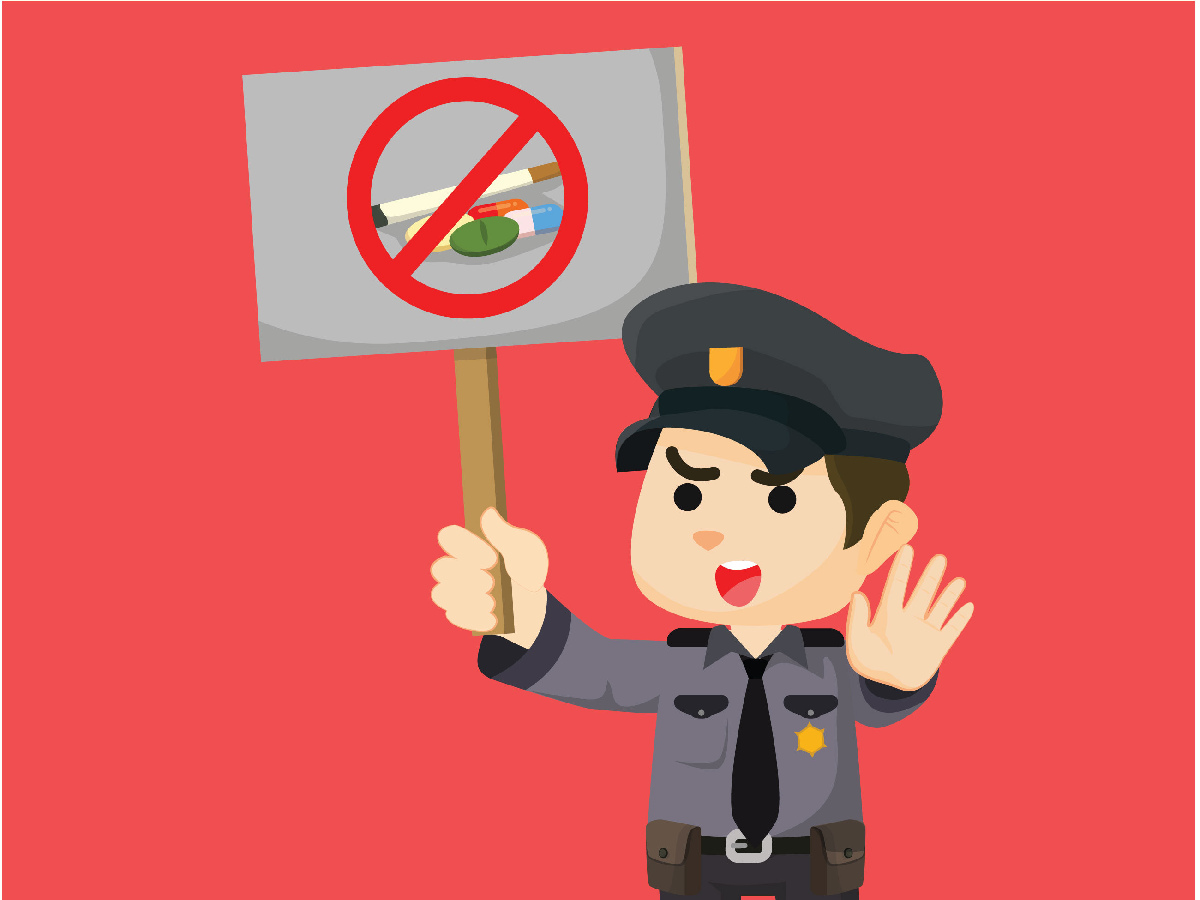 Sending police officers into schools is a prime tactic of the D.A.R.E. program.
By Daniel Dharma | Published: July 24, 2017

D.A.R.E. was created by police and politicians in the early 1980s.

An average of $600 million taxpayer dollars per year were spent during the first 15 years of the program, sending D.A.R.E. police officers into 80% of classrooms nationwide, and creating expensive anti-drug advertising and media programming.

First Lady, Nancy Regan, was an important D.A.R.E. proponent, with her prominent “Just Say No” campaign.

But then came studies proving that D.A.R.E. doesn’t work.

“D.A.R.E. does not work to reduce substance use,” explained a Congressional report in 1998. “The program’s content, teaching methods, and use of police officers rather than teachers might each explain its weak evaluations.”

A 2004 study published in the American Journal of Public Health described D.A.R.E as “ineffective.”

In recent years, D.A.R.E funding has dwindled as local, state, and federal agencies reduced or canceled funding after seeing no benefit from D.A.R.E.

In response to its critics, D.A.R.E. rebranded itself to discard its anti-drug emphasis and instead created a “keeping it real” program that attempts to teach kids how to make good decisions.

I can say from personal experience why D.A.R.E. is a waste of money.

When I was in 6th grade, our teacher told us a police officer would be lecturing our classroom the next day.

“I don’t approve of this, but the principal requires us to go along with it,” she said. “Ask questions. Don’t just accept what you’re told.”

The next day during second period, an intimidatingly large, armed, uniformed police officer entered the room, carrying a thin display box that had glass on the front.

Inside the box, he told us, were “actual samples of things that can kill you in a heartbeat.”

The things in the box were LSD tablets, marijuana, psychedelic mushrooms, a syringe of heroin, barbiturates, and amphetamines, he said.

None of us knew what those things were.

This was in the mid-1980s, when children weren’t as well-informed and sophisticated as they are today.

He said this about marijuana:

“These are the dried leaves of a deadly plant named marijuana. You hear people call it grass, ganja, or weed. People smoke it and become a totally different person. Sometimes they get violent. Other times they lose all touch with the real world. People who use this plant later on start using this other, even deadlier drug.”

The officer pointed to the syringe. It contained heroin, he said. “Heroin is addictive. One shot can overdose and kill you.”

We kids looked around at each other in horror.

The officer then said: “Some of your parents, brothers and sisters, neighbors, and other relatives could be using one or more of these drugs. Maybe even some of your classmates. If you want to help them, I’m going to leave a D.A.R.E. box in the principal’s office. I want you to write down who’s using drugs, and put that piece of paper in the box, so we can help them. Don’t put your name on it.”

We gave that box a nickname—the “tattletale box.”

A kid used it to report his stepfather for using marijuana.

But instead of the “help” the officer had promised, the stepfather was arrested, the child’s family went broke, and the child was put into a foster home.

During the very brief question and answer period, one of my classmates asked the officer why people use marijuana.

“When people are unhappy or in pain, or they’re abused, they want to escape from the real world,” he replied. “Marijuana makes people happy and forgetful for a little while. It makes people laugh at things that aren’t funny, and it makes you hungry.”

This was the first time I was ever told you could use a drug to “feel happy.”

Ironically, the D.A.R.E. officer’s presentation was the first time I became curious about trying illegal drugs.

When Sessions was a U.S. senator, he said marijuana use leads to heroin addiction.

As attorney general, Sessions has continually threatened to defy the will of Congress and voters by renewing a federal war on marijuana, even in legalized states.

“I fully understand the importance of what you do,” Sessions told a recent D.A.R.E conference. “I fully support it. I support you. The president supports you.”

But Sessions should already know that the evidence shows D.A.R.E. money won’t be money well spent.

For example, I started using marijuana within a year of the D.A.R.E. officer’s visit to my classroom.

Because I came from an unhappy home. I wanted to be happy, to forget my problems.

The police officer who visited our classroom said marijuana makes you happy and makes you forget.

That sounds like something I ought to try, I thought.

Sessions, who is the nation’s top law enforcement officer, should acquaint himself with the law of unintended consequences!