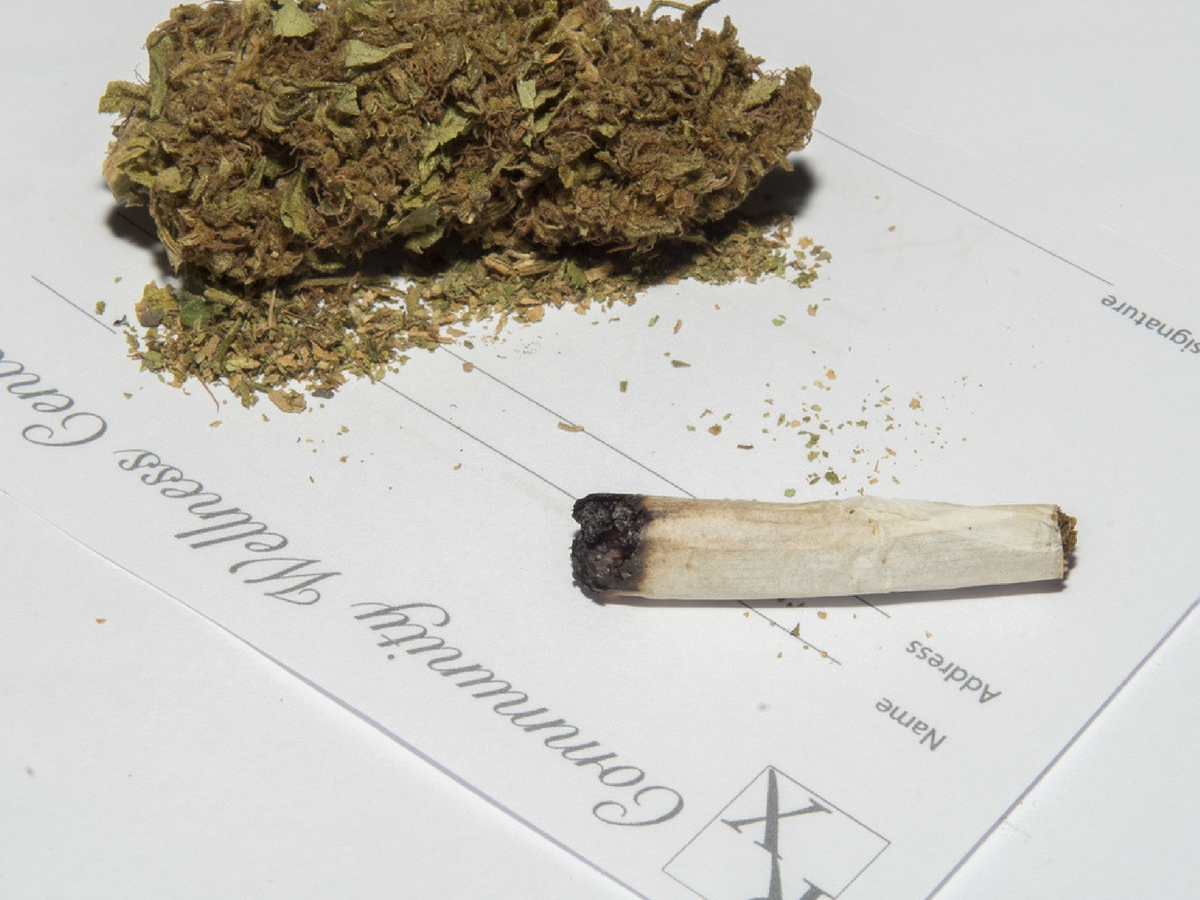 In the instant accessibility of today’s digital world, privacy is seen as a luxury and a commodity. And no group has voiced concerns over the threat of government monitoring more than the medical marijuana community.

Since the inception of legalized medical cannabis in California with the Compassionate Use Act of 1996, or Proposition 215, claims of government supervision over the industry — namely in the form of state-issued identification cards and mythologized watch lists — have been met with trepidation from patients who fear for their information security.

While there are a number of legal safeguards protecting medical cannabis users, new drug war policing under the Trump administration signals a stark shift in marijuana enforcement, particularly among immigrants and minorities. These groups are being rigorously targeted by law enforcement and customs and immigration officials, leading them to question the true privacy of patient information under the Trump regime.

California’s Bud History And The HIPAA

Before California voted to legalize recreational cannabis in November 2016, medical patients were required to have a doctor’s recommendation to legally possess or grow marijuana within the state. Legislation passed in 2003 saw California initiate a statewide Medical Marijuana Identification Program (MMIP) that offered legal protection from certain marijuana crimes.

However, this voluntary program raised several red flags, chiefly that patient information in this database could lead to unwanted government attention or prosecution. Current statistics released by the office of California Gov. Jerry Brown estimate that eight out of 10 medical patients in California forego Medical Marijuana Identification Cards.

For the majority of patients, a verified doctor’s recommendation is standard practice for buying, growing, transporting and consuming medical cannabis in California. As with all medical records, patient information is extremely confidential and protected under the Health Insurance Portability and Accountability Act (HIPAA), making it nearly impossible for doctors to share information with police, the DMV, or companies who conduct background checks, without the threat of serious financial and/or criminal penalties for those doctors.

Backed by the state, Medical Marijuana Identification Cards (MMID) provide additional legal protection for medical marijuana patients who fear unnecessary arrest and prosecution by law enforcement due to the current federal classification of cannabis as a Schedule I illegal drug.

According to Bay Area cannabis business attorney Lauren Vazquez, concerns over your privacy should not be a reason to avoid getting the state-issued card. Rather, she recommends that all patients whose medical needs exceed the California allowance carry a card.

California law requires police officers to verify the validity of state MMID cards, which have long been praised for being what LA Weekly dubs as proverbial cop kryptonite. Conversely, patients only carrying a doctor’s recommendation can potentially be detained and/or arrested while law enforcement verify its validity.

Fifty-six of California’s 58 counties currently offer MMID cards (Sutter and Colusa, both north of Sacramento, being the exceptions). To obtain your California card, each of these counties require applicants provide a government-issued photo identification and proof of California residency in addition to a doctor’s recommendation. Once a patient’s application is verified and approved, the county sends the info to the state, which assigns the patient an anonymous ID number and logs it in the database with its expiration date. Finally, the state and county destroy the application. 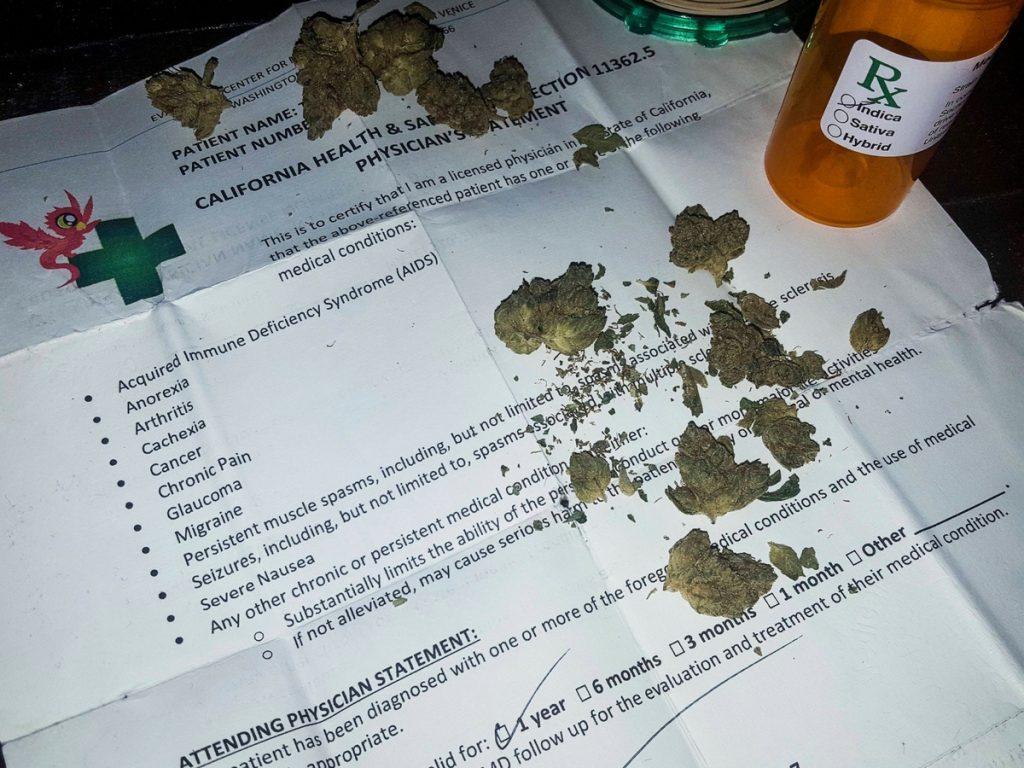 To obtain your California card, applicants provide a government-issued photo ID, proof of residency and a doctor’s recommendation, like the one above.

James J. Clark, a California criminal defense attorney specializing in cannabis offenses, points out that the validity of MMID cards can be verified by anyone at the state level via the California Department of Public Health website portal; however, only the patient ID number and photo are visible. As per the California MMIP website:

“The administering agency must implement and utilize appropriate procedures and protocols to ensure compliance with all applicable confidentiality laws and requirements of the Health Insurance Portability and Accountability Act (HIPAA).
The Medical Marijuana Application System does not contain any personal information such as name, address or social security number. It only contains the unique user ID number and when entered the only information provided is whether the card is valid or invalid.”

Furthermore, “it is a misdemeanor for any state employee to reveal patient information,” writes Vazquez in an email to Big Buds Magazine. All this suggests that HIPAA confidentiality laws equally protect patient information on both the medical and state level.

The longstanding argument that the Drug Enforcement Administration monitors registered patients may appear to be largely overblown. In 2009, then-Attorney General Eric H. Holder Jr. announced that “it will not be a priority to use federal resources to prosecute patients with serious illnesses or their caregivers who are complying with state laws on medical marijuana.” Additionally, data and other sensitive patient information seized by law enforcement during dispensary raids have not led to any individual prosecutions thus far.

However, nearly a decade later, a reinvigorated war on drugs — spearheaded by conservative Attorney General Jeff Sessions — and its subsequent policing seeks to radically change the status quo for immigrants and other non-US citizens within the medical cannabis community.

In April 2017 then-Homeland Security Secretary John F. Kelly announced that the Trump administration and the US Department of Homeland Security Immigration and Customs Enforcement (ICE) will treat cannabis as a deportable offense, particularly for undocumented immigrants:

“ICE will continue to use marijuana possession, distribution and convictions as essential elements as they build their deportation / removal apprehension packages for targeted operations against illegal aliens.”

Even though medical cannabis is legal in California and nearly 30 other states, and legal for recreational use by adults 21 and over in eight states and the District of Columbia, it is still illegal under federal law. Moreover, immigration law treats any offense beyond simple possession as a drug felony and sufficient grounds for deportation.

With stricter drug enforcement greenlighted under the Trump administration, according to government data, zealous immigration and border control officials arrested 41,318 individuals for civil immigrations charges between January 22 and April 29, 2017, up 38 percent from the 30,028 arrests made during the same period in 2016.

Immigrants with no criminal record were even bigger targets for ICE officials during this same time frame. Between January 24 and April 30, 2016, ICE made approximately 4,200 noncriminal arrests. That number more than doubled to over 10,800 in 2017. Both of these figures are projected to dramatically increase in coming months.

As a result, many legal experts strongly advise non-US citizens to:

Patient Privacy Is Safe — But Only For US Citizens

Despite legal safeguards and security protocols protecting patient information from unlawful access, this security only extends to US citizens, leaving law-abiding immigrants, including US resident Green Card and visa holders, at great risk for prosecution, denial of permanent residency, and possible deportation. Though California has made great strides in granting patients access to medical marijuana, federal law — and rabid federal law enforcement — looks to doggedly carry on its drug war and undo this progress until current administration finishes its term.

Special thanks to the law offices of Lauren Vazquez and James. J. Clark for their legal expertise in writing this article.