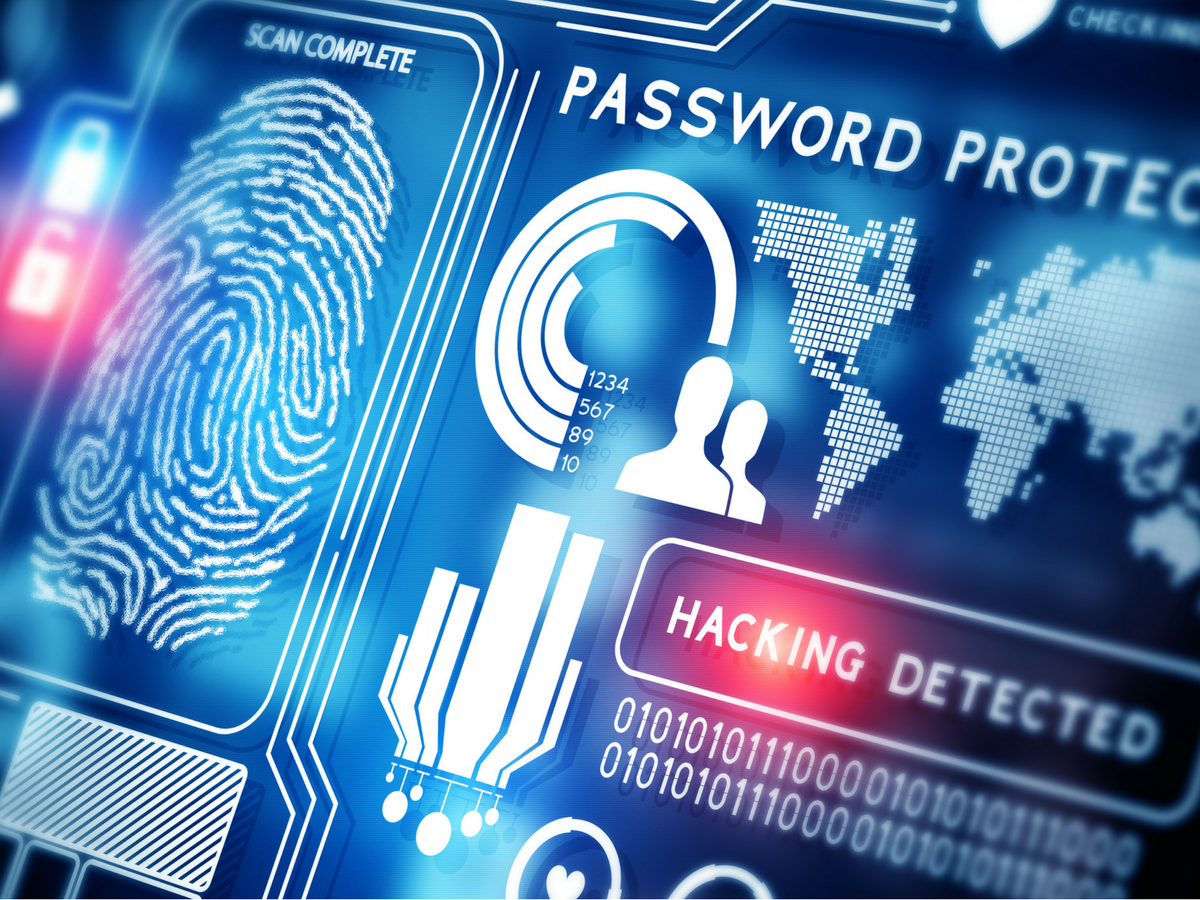 To help you understand the context of the relentless paranoia of this article, let’s start with the reminder that until such time as marijuana is federally legal in the USA — and until nobody steals marijuana, money or grow equipment from a grower — a grow op is something you need to keep secret.

If you’ve ever had a squad of armed people, whether law enforcement or unlawful enforcement, storm into your home and turn your life upside down the way I have, then you’ll know why I recommend being so vigilant about internet and electronic security. Getting busted, or having a cyber thief steal information from you, is a traumatic experience and something you want to work hard to avoid.

Yep, cannabis growers should always consider electronic security countermeasures when wanting to keep their grow op safe. So let me break it down for you.

When the police kicked down my door to bust my grow op, they had a search warrant authorizing the seizure of, among other things, “all computers, hard drives, photo albums, thumb drives, cellphones, surveillance video and other electronica.”

“Electronica” is a very good place for police to find incriminating evidence against marijuana growers, and they easily found on my computer what they were looking for: Evidence that I’d been growing marijuana for a long time.

Indeed, the po-po found pictures of me with my marijuana plants. They found receipts for grow gear. They found grow diaries showing how much I’d grown and harvested during the past five years. They found PDFs of grow books. It was all the evidence they needed; my grower diligence had made their jobs easy.

I even know growers who go on cultivation forums and post pictures of their grow ops, along with more information than they should share in public, including their real names.

No other way to say it — the police can and do penetrate even your most sophisticated encryption that’s meant to make your hard drive or handheld device inaccessible to prying eyes. Officers even lurk on marijuana social media and cultivation websites as a means of information gathering.

If they want to, they can use your handheld device to track you, record you, even put you on camera. When I used to work with a consortium of commercial marijuana growers, the rule for everyone in the crew was to take your damn battery out of your phone whenever you’re within 50 miles of each other or a grow house.

You Have No Choice But To Fight Back

The more encryption and anti-tracking tricks you use to ensure electronic and online security, the better.

The more difficult you make it for police to blaze past your firewalls and anonymizers, the better. Why? Because cops are lazy predators. They want to do a quick pot bust and have fun, get in and out. They want to cut down some plants, handcuff you, abuse their power, make your life miserable, and wait for you to sell out for a plea deal so they don’t have to testify or do more paperwork.

But if they intend to prosecute you or they think you’re going to challenge the search warrant or arrest, they need your electronically stored incriminating evidence to make their jobs easier. The cool thing is, the harder you make it for them to get your data, the more likely they are to give up on you and instruct the prosecutor to drop charges or offer a plea deal.

I’m no attorney, so I always recommend you spend the $100–$300 for an hour’s worth of time with a marijuana specialist criminal defense attorney who’ll give you advice about defeating the police so they never pay a visit to your grow op.

However, remember that not even an attorney knows about all jurisdictions’ laws. My attorney advised me to never tell police passwords, not even border police.

I followed his advice at the Canadian-USA border. It didn’t go well. A Canadian border patrol officer demanded I give him my computer password and phone unlock code, and I refused. He said he can hold me indefinitely in the interzone between borders, and at times it seemed like he was going to.

To make things a little weirder, when he’d pulled me over for a secondary search, I’d been forced to covertly swallow several grams of bubble hash with almond milk.

Within a few hours I was stark-raving high. But using my years as a stoner to good advantage, I somehow managed a poker face as I sat in a holding cell with a border cop coming in every 45 minutes to ask if I was ready to hand over my passwords, and all I could say was, “I want to leave. I want to call my embassy.”

Eventually I was released, but they wrote down in my records that I was uncooperative and warned me I’d likely be banned permanently from ever traveling from the USA to Canada.

The Careless Slip-Up Of A Seed Bank

When people accuse me of being paranoid, I kindly remind them that hackers can access your electronic devices, your car’s computer — even your home thermostat. I’m not talking only about hackers that might want to bust you for growing cannabis; I’m talking about thieves and miscreants who scour the internet looking for privacy-busting mistakes so they can blackmail or rip you off.

Another way to get into trouble is, when ordering marijuana seeds and growing gear, if you use a credit card with your real name on it and/or with a billing address that matches the address where you grow marijuana.

It doesn’t have to be government surveillance that trips you up when you do careless online cannabis-related shopping. It can be your own sloppiness — or the sheer incompetence of another.

I ordered marijuana seeds from the biggest UK-based marijuana seeds bank and was surprised to receive strains I didn’t order, along with a receipt showing the name, address and phone number of the person who did order the seeds! I can only presume that the other person got my order, and received all my personal information, too.

When I notified the seeds company, they acted like it was no big deal. While they couldn’t explain how the mix-up happened, they had the gall to dismiss me as a “typical paranoid American.”

At least they sent me my order. But I never ordered from them again!

I don’t want to leave you with a feeling of futility or ennui. If you want to protect yourself, you have no choice but to use every electronic security technique and trick. There’s a good chance your tricks will work well enough to prevent you from being easy prey.

One of my friend’s dads was growing weed back in the day, when wireless landline phones were just introduced. Those phones are radio transmitters and back then they weren’t engineered to scramble their signals to defeat electronic eavesdroppers.

Next door to my friend’s dad lived a retired old meanie who had nothing better to do than sit around all day listening to a police scanner. He picked up my friend’s dad’s phone conversation about growing weed, so he called the police. The search warrant said, “Based on a tip from a confidential informant.”

The good news is that today’s high-quality landlines are protected from eavesdroppers by digital enhanced cordless telecommunications, or DECT protocols that shift the phone’s radio frequency constantly.

Check out the below YouTube video about internet security, courtesy of Tek Syndicate.

If you go online for any reason, not just to look at marijuana seed catalogues or participate in a cultivation chat room, you want to be as invisible and firewalled as possible.

Anonymous email, an anonymous web browser, anonymous logless VPN, mega-password wireless router, anonymous credit and debit cards, and cloaked IP can often defeat government and civilian spies. Unless you’re the target of an organized crime investigation, in which case the police agencies pull out all the stops and find a way to break into your systems, no matter what you do.

And let’s state the obvious: When you want absolute social media security, you’re not going to say a word about marijuana growing on your Facebook, LinkedIn or Instagram accounts.

Does all this paranoia, technology and cloak-and-dagger spy thriller stuff sound like too much bother and worry?

I get that, I really do. Sure, it’s a hassle for me to have one device on which I store all my cannabis photos and general marijuana-related data — a device I lock up in a hidden safe after every use. It’s a hassle that I can’t order marijuana seeds to the house I live in where I also grow weed. Countermeasures create extra work and can cost extra money. Large-scale professional growers who have a lot more to lose than I do employ spy-defeat companies that consult on and implement countermeasures.

Many of us have that nerdy friend who knows all about masking yourself online, and it’s a good idea to ask that person for help.

Only you can decide how extreme you want to be in guarding your electronic security. Easy tactics include:

Yes, this is a harsh topic to address for marijuana growers. It wears on you to know that until marijuana is decriminalized federally and in your state, there’s always a chance that a government agent, a cantankerous narky neighbor, or a thief could create havoc for you via an electronic security breach.

Fortunately, marijuana is a great anti-anxiety drug. Whenever I feel anxious about the unseen spies who might be lurking in the shadows, it’s a great excuse to enjoy fine herb, forget about those sneaky informers, and dance around to this very appropriate music video by Rockwell:

Miles Away from Ordinary, Corona Wants A Taste Of Cannabis
Hell With High Water: The Dangers Of Overwatering Your Cannabis Crop