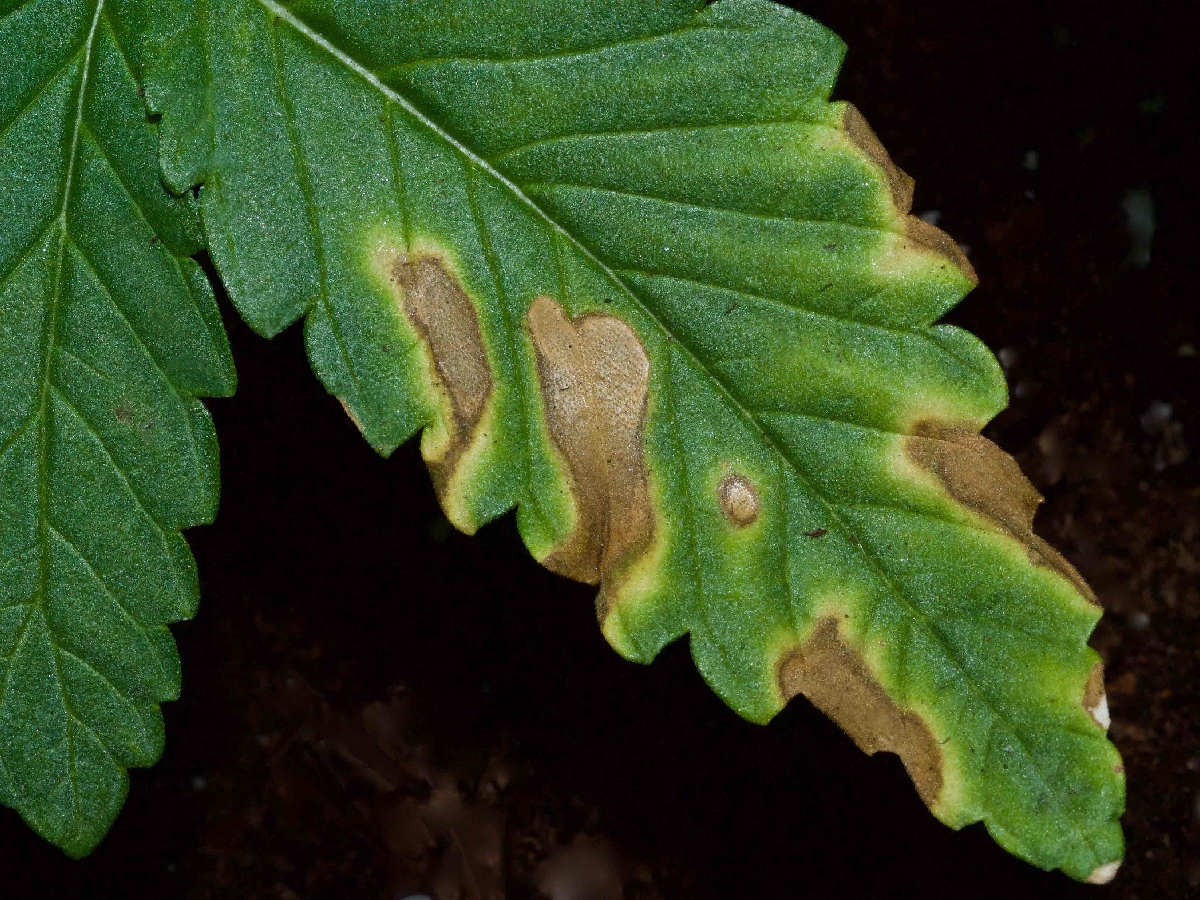 I started growing weed two years ago but I’m not an expert marijuana grower yet.

I still encounter grow room problems I can’t figure out.

I used General Hydroponics 3-part in an individual-pot ebb and flow system when I first started growing.

When my pH kept shifting and my marijuana leaves had problems (shown in the photo for this article), I called General Hydroponics tech support and told them I was a medical cannabis grower.

They said they can’t talk about marijuana growing. I could tell they knew nothing useful anyway.

I threw away their shit and bought Canna.

Using Canna, the reservoir pH problems weren’t as bad, and my plants had fewer but different leaf problems.

I figured that because their name is Canna they won’t have any problem discussing cannabis.

But they wouldn’t talk about growing marijuana.

All they said was I should use Cannazym.

Well, I bought their expensive bottles, and it made no difference.

So by this time I’d run three complete crop cycles with two brands of hydroponics nutrients.

I was getting about one pound of dry bud from one light (1000-watt). Not enough!

For my next crop I switched to Advanced Nutrients because the company was created by a famous commercial marijuana grower who makes videos about growing 3+ pounds per light.

The Advanced Nutrients stuff was easy to use because I didn’t have to worry about adjusting pH.

I didn’t have any crop problems until the last week of grow phase.

I didn’t think the problems were coming from the nutrients, but I called Advanced Nutrients grower support anyway.

During several calls, I talked with three people there (Roy, Andy, and John) but mostly with John.

Unlike the Canna and General Hydroponics employees, the Advanced Nutrients people were obviously expert growers.

They know what it’s like to worry about your crops, and sincerely wanted to help.

John talked to me for nearly an hour the first call.

I called several more times as the Advanced Nutrients team helped me throughout bloom phase.

The Advanced Nutrients tech support people helped me find out that:

Following the Advanced Nutrients grower support advice, I was gladly surprised by how fast my plants grew, how much they branched, how big and sticky my buds were compared to growing with General Hydroponics and Canna.

They helped me get the sweetest harvest (nearly two pounds from one light) that I’d ever cut!