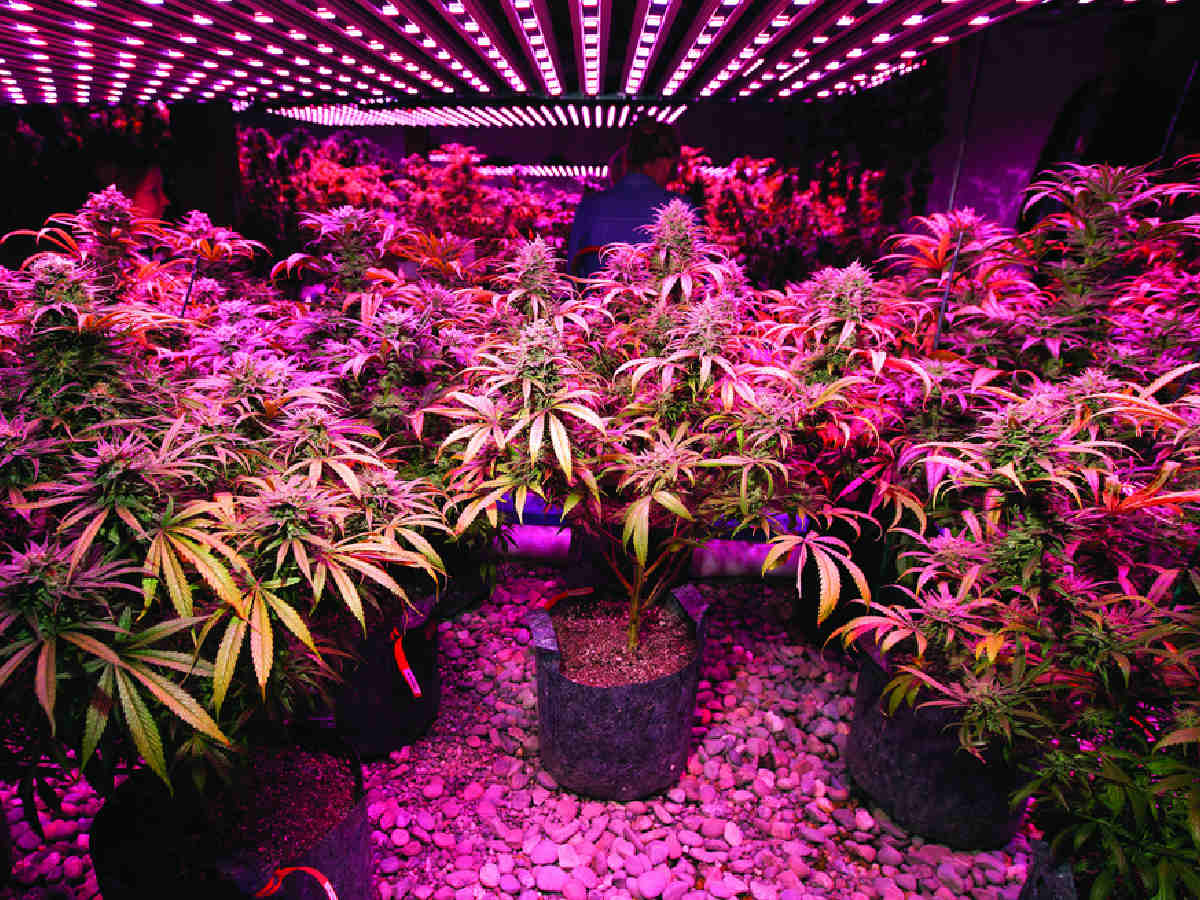 Light is food for your marijuana plants.

It comes to your plants from the sun or grow lights, delivered in different wavelengths categorized as “nanometers.”

Technically, it’s more accurate to say that electromagnetic radiation (including but not limited to the visible light spectrum) is food for your hydroponics cannabis plants.

Your plants eat electromagnetic radiation that contains ultraviolet and far infrared radiation, but your eyes can’t see those wavelengths.

The ideal electromagnetic spectrum for marijuana contains wavelengths from 320 to 730 nanometers (nm).

Your cannabis plants grow faster, produce heavier harvests and give you more terpenoids and cannabinoids when they’re fed specific ratios and amounts of target wavelengths at different times.

The ideal spectrum graph for marijuana shows acute spikes and valleys, indicating more intensity in specific wavelengths, and less intensity in others.

In bloom phase, they want more from the red spectrum.

But that’s a vastly oversimplified explanation of marijuana’s use of the electromagnetic spectrum.

The best grow lights for marijuana are made by manufacturers who create a menu of wavelengths that specifically matches your plants’ needs.

The best HID and LED hydroponics grow lights (such as Lush Lighting LED) provide a wide spectrum from ultraviolet to far infrared.

Grow lights have to provide sufficient and appropriate intensity in each wavelength.

For example, in grow phase if your grow light’s spectrum has too much red and not enough blue, your plants stretch out.

In bloom phase if the spectrum has too much blue and not enough red, your buds don’t grow as big, and won’t have all the terpenoids and cannabinoids they could have had.

The key fact is that a grow light must provide the right electromagnetic wavelengths (spectrum) in the right amounts (intensity).

As with a complicated chef’s recipe, it matters a lot if all the ingredients are added at the right time in the right amounts.

Specialized LED grow lights, ceramic metal halides, and some other HID grow lights provide the right amounts and ratios of the spectrum… but only if they’ve been designed for cannabis.

Only a few brands and models of grow lights have been designed for cannabis, so ask your hydroponics retailer to find out which ones are best.

HID lights, especially ceramic metal halide and double-ended grow lights, provide the highest intensity of electromagnetic radiation; they penetrate further into your plant canopy than other types of grow lights.

It takes a lot of electricity, and a lot of heat, to generate the intensity and spectrum your plants need.

But your plants will reward you for feeding them the right electromagnetic food!