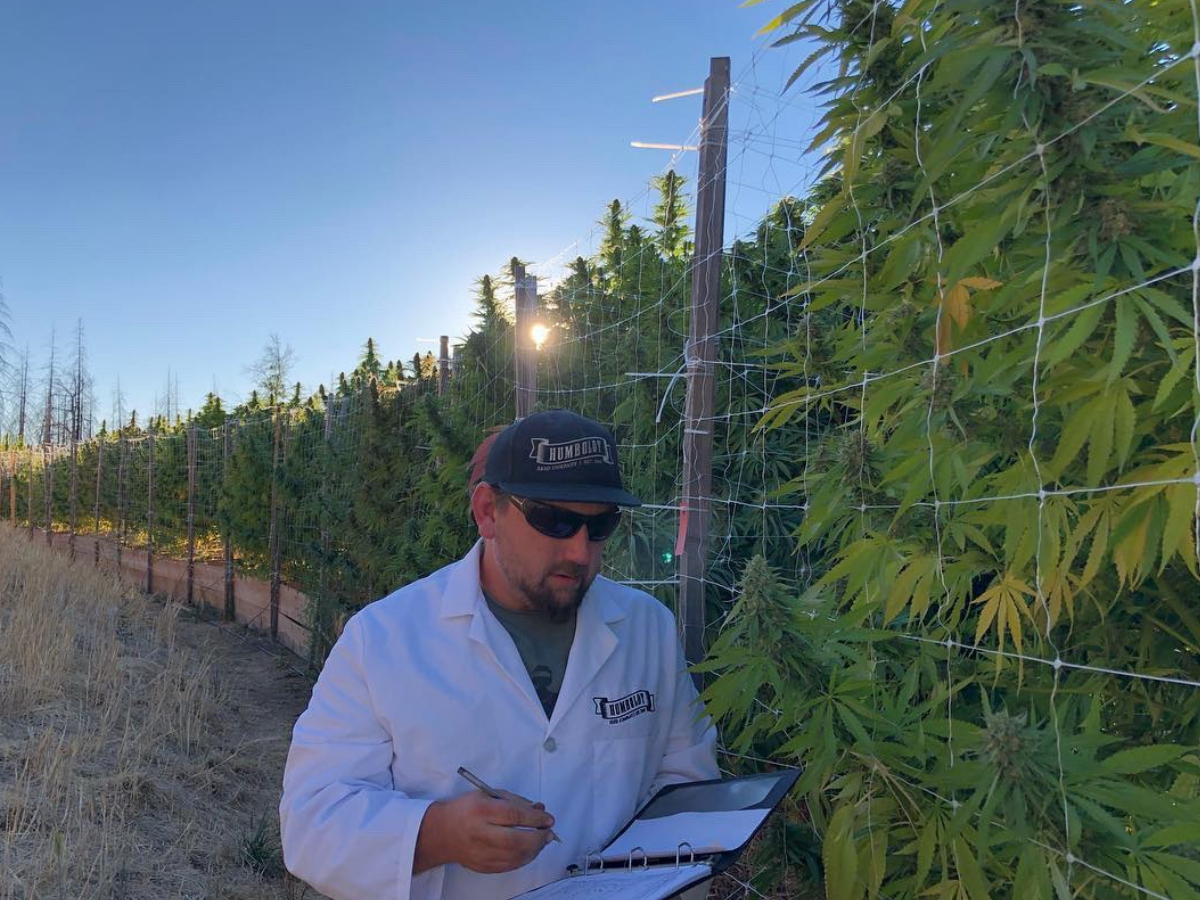 Humboldt County is located in the Emerald Triangle, Northern California’s famed marijuana mecca. Many tons of cannabis, grown mostly outdoors, have been produced there since the 1970s. The region boasts wilderness, mountains, rivers and dense forests, with miles of rugged coastline pounded by crashing Pacific Ocean waves. It’s also as large as some countries — including Jamaica, Lebanon and Cyprus — but total population is fewer than 140,000 people, and its biggest town, Eureka, has only 27,000 residents.

CEO of Humboldt Seed Company Nathaniel Pennington is a conservationist and professional cannabis strain breeder. And he believes that endangered salmon species and rare cannabis strains native to Northern California have much in common.

How alike could a fish and a marijuana seed possibly be? There are hundreds of distinctively indigenous NorCal cannabis strains, Pennington explains, just like there are rare native salmon species that have been breeding in the same river systems for centuries.

“The Emerald Triangle is heaven for cannabis lovers seeking rare marijuana seeds and strains, attracting an influx of dedicated growers and breeders from around the world,” Pennington says. He adds that the region’s longtime guerrilla growers helped shape North American cannabis cultivation using adaptive breeding of landrace genetics and hybrids from around the world to create strains that handle the region’s microclimates and wildly diverse conditions. Indeed, growers in one Humboldt valley can count on low rainfall, heat and plenty of sunshine during bloom phase, while growers in a different valley just a few miles away suffer with fog, humidity and precipitation.

Divergent climate and soil conditions, pests and diseases — as well as the timing of state and federal law enforcement’s Campaign Against Marijuana Planting to eradicate cannabis cultivation and trafficking in the area — forced many Emerald Triangle growers to breed new strains that could ably survive these myriad threats.

Pennington moved to the region in 1996 because of his interest in ecological conservation and cannabis. He joined a sprawling network of cannabis breeders creating one-off strains because, back then, they felt commercial seeds were expensive and only available from the Netherlands, while commercial clones weren’t available at all.

At first, much of Pennington’s time was taken up with ecological activism and research. He wrote a grant that funded university research into salmon genomics, and was a leading member of the Salmon River Restoration Council, which spearheaded pioneering research aimed at preserving salmon species that were suffering due to climate change, pollution and habitat loss.

Coordinating research events in which more than 100 divers swim the river system to count imperiled chinook and steelhead, Pennington says, “It’s the oldest survey of its kind, and we enjoy the participation of many state and federal agencies as well as Native American tribes who see the [fish] as part of their heritage.”

Cannabis research began to take center stage for Pennington in 1999, when he created Humboldt Seed Company, having been influenced by an eco-preservation mentor who was also a master cannabis breeder and grower. He says his mentor and other long-time regional growmeisters taught him the “art and science of cannabis breeding,” and Humboldt Seed’s ethic is founded on “deep reverence for the ultra-potent and tasty unknown cultivars created exclusively in the Emerald Triangle.”

“Humboldt Seed Company is dedicated to restoring, preserving and sharing our region’s very special marijuana strains so they can be grown and enjoyed worldwide,” Pennington continues. “Until Humboldt Seed Company was created, 99 percent of these native cultivars were rarely seen outside the micro-region they were bred in. A grower from some obscure, no-name hilltop created one of the world’s strongest purple strains, but only the grower’s tiny group of friends knew about it. The same was true for a guerrilla farmer hidden away in a redwood forest who created a strain that thrives in a shady, cool environment.”

The Humboldt Seed Company catalogue is as inspiring as it is mouthwatering. It includes perfected versions of well-known West Coast strains like Trainwreck, OG Kush, Girl Scout Cookies and Sour Diesel, as well as signature strains with tastes, scents and highs not seen elsewhere.

Pennington was joined early on in Humboldt Seeds by Ben Lind, a third-generation cannabis breeder and fellow environmentalist with a background in environmental geology. Lind’s family grew cannabis before clones and commercial seeds were part of the scene; a time when cannabis farming necessitated personal seed production for next year’s crop. Ben’s aunts and uncles spent many years improving local, wild cannabis strains, turning them into high-THC cultivars.

Enhancing Cannabinoids & Terpenoids In Your Grow

“We focus more on terps than most breeders do. Terpenes change how THC and other cannabinoids affect you. Terpenoids protect plants. We breed engineered ratios, percentages and types of compounds that result in a wide range of psychoactive and medical effects,” Pennington explains.

Humboldt Seeds’ breeding efforts are backed by genetic testing. To unearth the most spectacular, unknown strains, the company stages an annual regional search that Pennington calls the “Pheno Hunt.”

“Our team goes to dozens of farms, large and small, to find the region’s best cannabis genetics during our yearly Pheno Hunt,” he says. “We examine tens of thousands of plants at multiple locations, using a mobile laboratory and plant tissue samples to assay genetics, and cannabinoid and terpenoid percentages and ratios. Only the most stunningly impressive plants make the cut to become part of our breeding programs.”

When asked if strains bred by outdoor growers in NorCal also grow well indoors and outside in places like Kansas, Maine or Arizona, Pennington explains that Humboldt Seed Company preserves the superlative aspects of original Humboldt cultivars while “tidying them up” so they can be grown almost anywhere, whether in a grow room or outside.

“Our [cultivation] network includes geneticists, so we’re called on to develop tailored cultivars appropriate for places far from Northern California,” he claims. “When a large Jamaican ganja farm employed us to create cultivars, we started with typical ideas about which cannabis genetics would work best in tropical sun and high humidity. We traveled across Jamaica, collecting rare genetics from the island’s grow sites. Pretty soon, we discovered that genetics we assumed would fail miserably in Jamaica could be modified so they actually worked very well.” 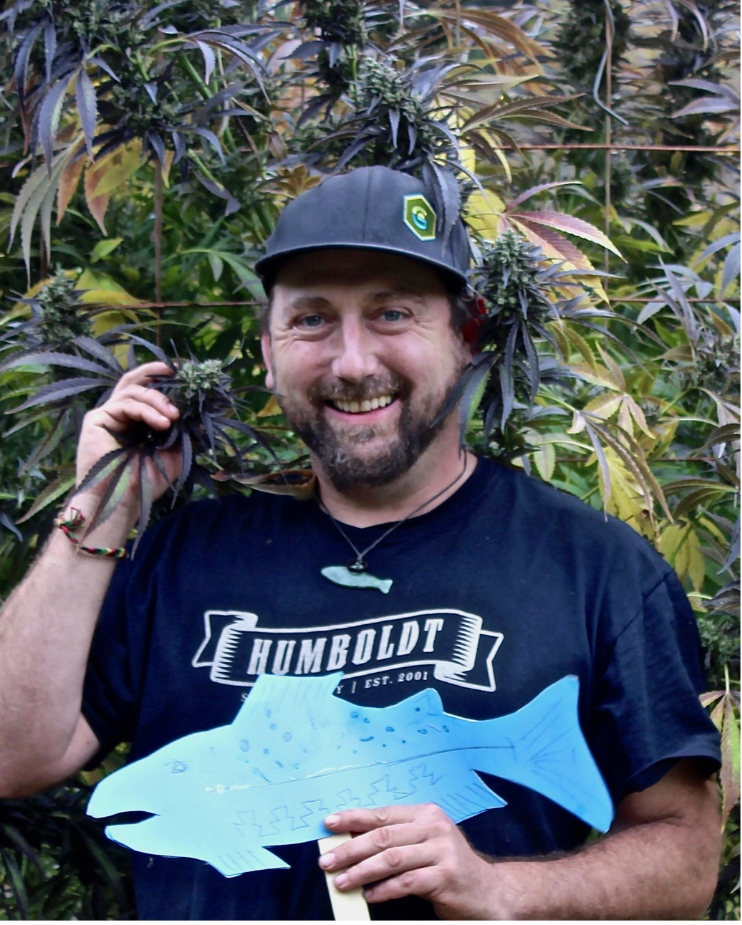 Pennington refers to cannabis as a “conscious” plant that has learned to adapt on its own, passing its wisdom from generation to generation. “One thing I know from years of breeding and testing, is cannabis adjusts its genetic makeup in real time and passes those traits to progeny. Sometimes we assist that process. In certain Humboldt microclimates, you get torrential rains in bloom phase before the plants are ready to harvest, so gray mold wrecks your buds. We work on joint ventures with our plants to shorten bloom phase so plants finish before the rains come.”

“With the onslaught of hazardous materials used by some cannabis growers resulting in pesticides, fungicides and other toxins infused into clone tissue and showing up in cannabis concentrates, growers turn to our certified organic seeds and clone genetics to ensure a clean start,” he explains of his company’s popularity. “All our seeds go through a proprietary sanitizing, disinfecting and inoculation process that assures cultivators will start their grow without unwanted pests or chemicals. And we thoroughly vet our licensed nursery partners to ensure the safest, cleanest operating procedures and use of integrated pest management.”

Aside from its focus on ecology and preservation, Humboldt Seed Company is known for its philanthropy and commitment to workplace diversity, female empowerment and social justice. Some of Pennington’s colleagues are members of local Native American tribes, and the company is lauded for helping people inside and outside the cannabis community.

With the company widely known for its incredibly stable, true-growing, tasty, crushingly potent rare strains nobody else has — plus a gourmet seeds menu featuring high-CBD cannabis — there’s only one thing that worries Pennington: The corporate takeover of the cannabis industry.

“Most of us here are worried about corporatization and its effects on the Emerald Triangle’s small, family-run cannabis farms,” he says. “After all, home growers created the marijuana movement, providing the buds so millions of people could try cannabis, discover how amazing it is, and vote for legalization. Now, these same small-scale growers feel the harsh pinch of big canna. I hope craft cannabis farmers find a niche of customers who want to enjoy real cannabis the way nature intended it, and that people continue to grow their own, because nobody can grow cannabis for you like you can.”

The Ballad Of The Dutch Grow Shop: How Staying Small Kept The Legendary Plantarium In Business
Colombia Steadily Becoming A Grow Mecca For Big Marijuana, Yet No Export Licenses Issued