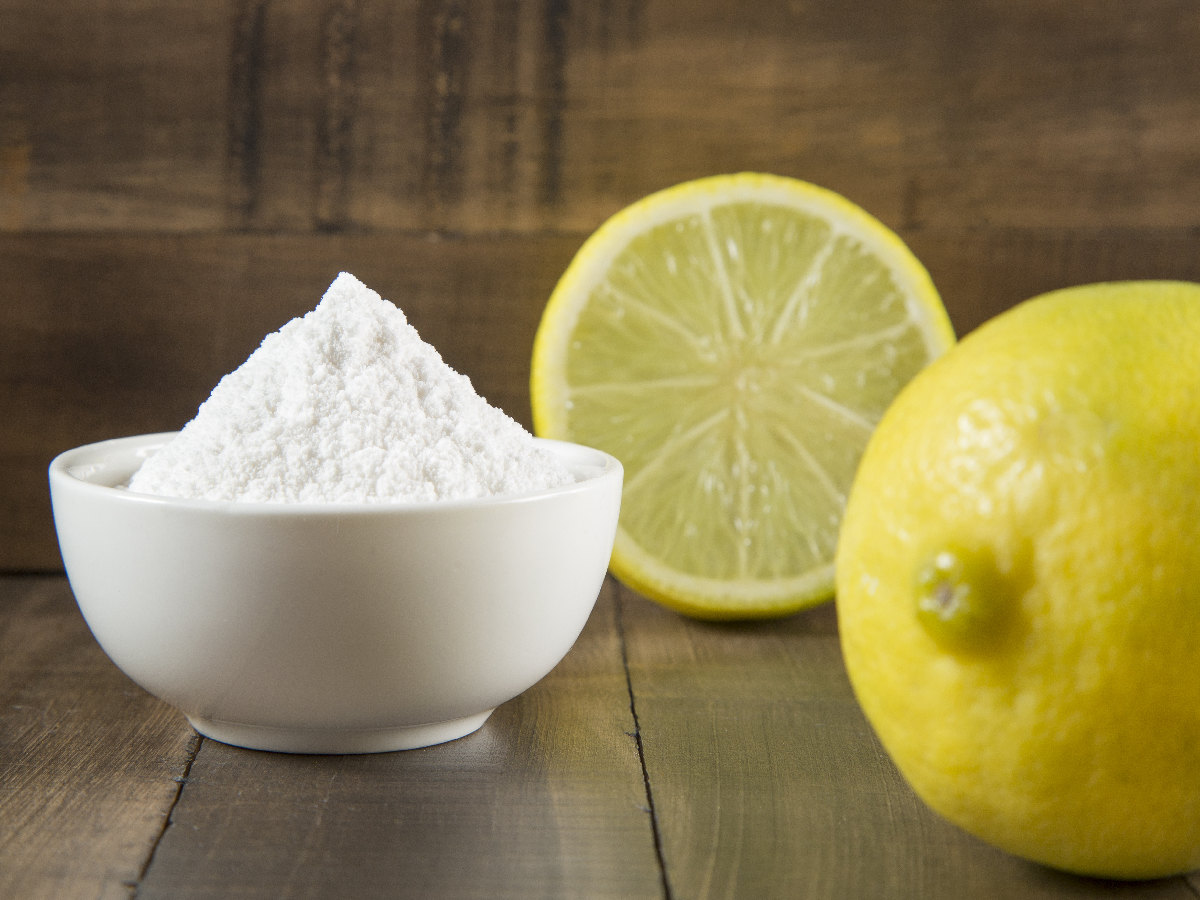 Baking soda and lemon juice have proven powerful cleaners for all manner of things, including cannabis.
By David Carpenter | Published: November 2, 2017

There is no disputing that washed things are generally more pleasant than unwashed. A newly laundered T-shirt. A tidy house. A freshly brushed set of pearly whites. But scrubbing your marijuana buds? Is that even a thing?

Corey Drumm is here to say, “Oh yeah, that is definitely a thing.”

The Northern California grower explains, “The first time I closely inspected some buds I’d grown in my backyard and saw bird poop and a creepy little micro-bug on there, I was immediately trying to figure out how to clean up my crop. I mean, you wash vegetables from the garden, right? I thought, ‘Why not clean up your pot?’”

A day later — and a circuitous path through the Dante’s Inferno of cannabis DIY message boards — Drumm was headlong into devouring information about a process called bud washing.

A Method To The Madness

The two-step technique is a cleaning method that many cannabis cultivators said had worked for them to scrub their harvests clean.

The popular method calls for:

Here’s what you need to do:

On the message boards Drumm was visiting, dozens of growers were espousing the virtues of sanitizing outdoor bud that had been polluted with dust, insects, bird droppings, cat hair — you name it, all manner of debris was in their flowers and fouling up their end smoke. Of course, there were also a few naysayers cautioning against possibly ruining a whole crop — “Don’t do it, you’ll end up smoking a wet sponge!” — but the majority were championing the cleaning process as forward-thinking weed tech.

Drumm was intrigued, but cautious.

“I had visions of turning my whole year’s harvest into a total sopping mess of plant matter,” he recalls. “I started slow and low, with a quart of water instead of the huge Home Depot bucket they recommended. And it worked really well. You should have seen how dirty that first bucket of water got!”

That was three years ago, and Drumm has been an avid washer ever since. But it wasn’t until this year, with the wildfires blazing all over Northern California, that he found the bud washing process indispensable. 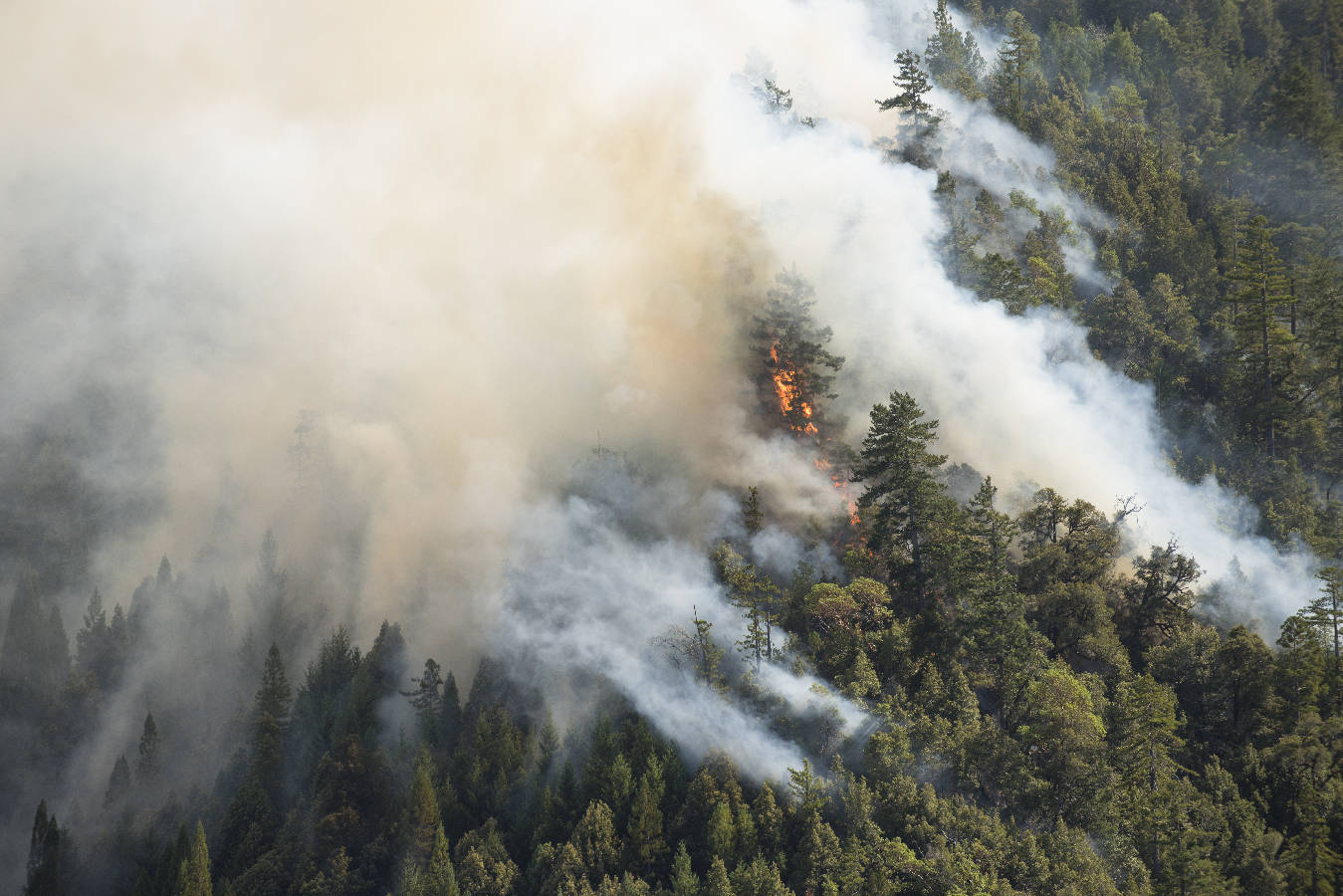 Chaos In The Cannabis Garden

Drumm’s hometown, situated 25 miles from Santa Rosa, was incredibly close to the most destructive wildfires in California’s history. Those fires, which happened this fall, burned for nearly two weeks, claimed the lives of more than 40 people and destroyed over 14,000 homes. Reports from locals say the smoke from the blazes nearly blotted out the sun for a week, and windblown ash was recorded landing more than 50 miles away in downtown San Francisco.

“It felt to me like Armageddon, like it would never end,” Drumm recalls. “And it was smack in the middle of my harvest time.”

The fires began the second week of October, at a period just before Drumm had planned to harvest the majority of his crop. He had already pulled about one-third of his plants the previous week, but had a few more that he was letting grow longer. The weather was hot and the forecast showed no rain ahead, so he thought, “Why not let them run?”

It turns out that timing was a stroke of very bad luck.

“I woke that Monday morning and my backyard was covered in ash,” says Drumm. “My plants looked like someone had sprinkled grayish powdered sugar all over the garden.”

He says his Bubba Kush plants (he makes a point to note they were a prized pre-1998 cut) seemed to bear the brunt of the ash damage, as they were big, bursting colas with a lot of surface area.

Drumm stood there paralyzed, gazing over the chaos in his garden.

“It was heartbreaking. Our electricity had just gone out because of the fires and there was an eerie, quiet calm in the neighborhood,” he says. “It smelled like a campfire was burning in my yard. It was really hard to process it all.”

After a few catatonic minutes, Drumm shook off the shock, grabbed his pruning clippers, and began harvesting everything he could. Soon he had a wheelbarrow full of depressing, ashen colas. All during the cut, he was hoping that his bud wash method might help them, but felt despondent that it probably wouldn’t clean up the mess. “They looked so freaking bad,” he remembers.

He quickly set up his two five-gallon buckets, one with the 1:1-cup-ratio solution of baking soda to pure lemon juice, the other filled with pure water for rinsing. He had a 60x magnifier on hand — similar to a jeweler’s loupe equipped with a light — that he typically used for inspecting trichomes, and employed that to see the before/after of his bud washing.

“I couldn’t believe it. A lot of the ash was definitely being washed away,” Drumm says. “I saved probably 50 percent of my crop. It took the entire day and into the night to do it all, but it did work for a good portion.”

Drumm’s method was to take an individual cola, ranging from 10 to 14 inches long, and swirl it around in the water with baking soda and lemon juice. He varied the time he swirled based on how ashy the buds looked. Some took one to two minutes, others he gave up to five minutes. Swirling, swirling, swirling. Clockwise, then counterclockwise. When he moved over from the solution bucket after a few minutes of swirling into the clean water bucket, “There was very little ash or dirt coming off at that point. It was amazing.” 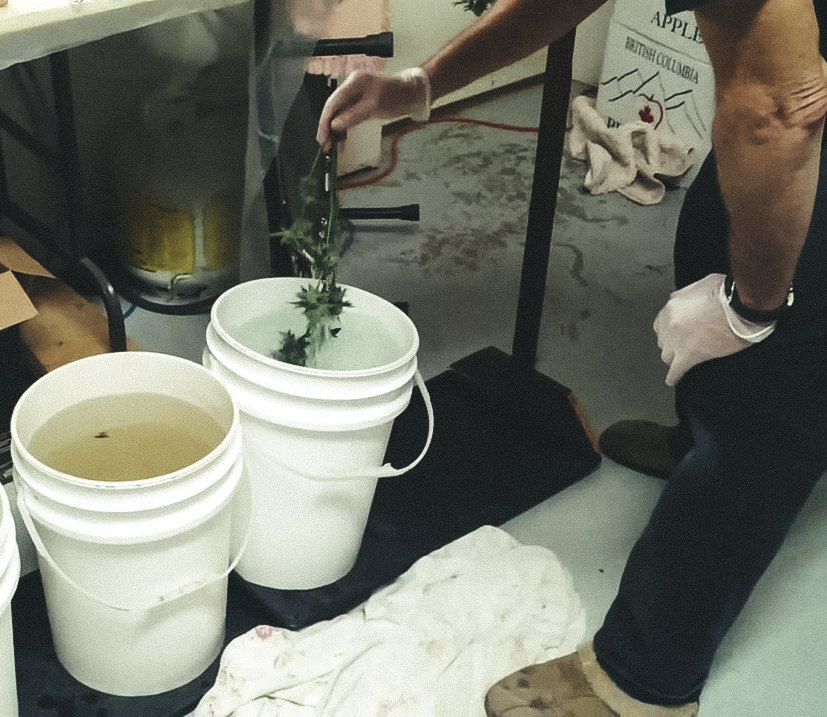 This two-step method involves dunking and swirling your buds in a baking soda and lemon juice mixture before rinsing in water.

The method Drumm used has some good science to back it up. A recent study by researchers at the University of Massachusetts at Amherst and published in the Journal of Agricultural and Food Chemistry found that baking soda in water outperformed bleach-spiked water for getting rid of unwanted debris and chemicals on fruit (namely pesticides) by breaking apart certain molecules. The lemon addition in the bud washing process is just another antiseptic measure, due to the natural astringent quality of citrus.

Drumm’s only caveat to the method is to make sure that you have “really solid conditions for drying the washed flowers.” Dipped flower requires a steady drying atmosphere of 40–50 percent humidity and 65–75 degrees F, or powdery mildew could set up inside the buds.

He ruminated for a little bit on that 50 percent loss of his garden this year — which took most of his Pre-98 Bubba Kush. But then came the reports of all the losses people were suffering just a few miles away in the wildfire zones.

“I know a lot of people around here, just like four or five miles away from me — they lost everything in the fires,” Drumm says. “They lost homes, all their belongings, everything. All things considered, I count myself as really very lucky.”

Hell With High Water: The Dangers Of Overwatering Your Cannabis Crop
The Taxman Cometh for California’s New Legal Market, Which Could Turn Black Again Come 2018