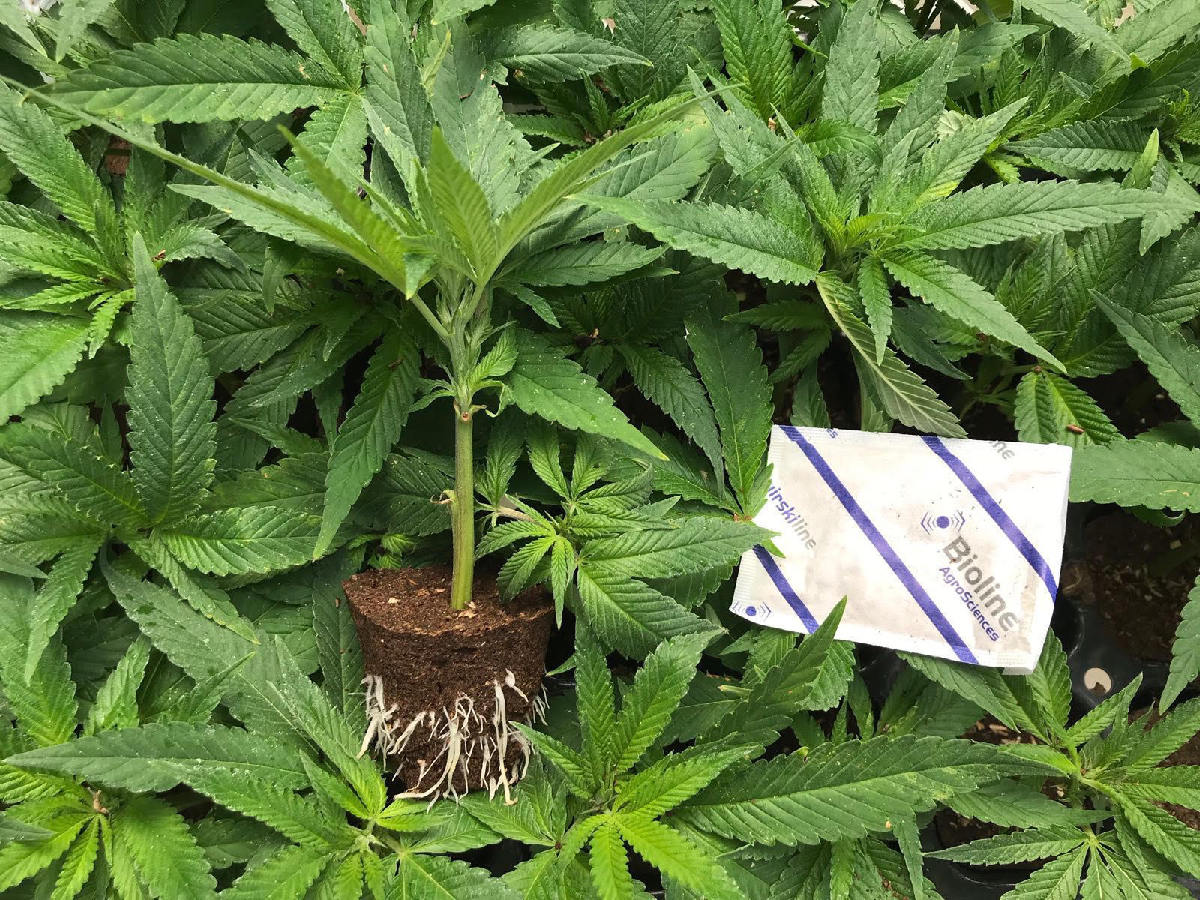 So your cannabis crop is coming along just fine. Then, seemingly overnight, strands of thin webbing begin to engulf your precious plants. You reach for the chemical sprayer, only to realize that what you spray on the plants may show up as a harmful residue, resulting in the loss of the entire crop.

The better alternative is to start a biological control program to deal with the insects that attack your plants, including those nasty mites that spin the webbing. However, in the all-too-familiar scenario presented above, it’s too late to do any good, or at best it’s going to be quite costly to bring control to a problem that has gotten so out of hand.

When It Comes To Your Cannabis Crop, Learn To Be Proactive

“On a global level, the No. 1 reason a biological control program fails is starting too late,” says Ronald Valentin, head technical support at Bioline AgroSciences. “If you look at most of the pest problems — thrips, aphids, hemp russet mites — by the time you see the problem, you’ve missed your opportunity.”

“One of the most challenging things is to make sure growers understand that this is not a reactive but a proactive approach,” he insists.

So, get your bugs in a row! Beneficial bugs, that is. If you’re new to biological control or are having problems implementing such a program for insect management, it’s best to work with a consultant or company that specializes in this approach to ensure a successful launch. In terms of cost, Valentin says a biocontrol approach to pest management isn’t much different than conventional spray programs, especially if you’re being proactive in your approach to insect control.

The fact is, there isn’t much of an alternative to using biological controls. Chemical residues on a product that is being inhaled as vape or smoke, or ingested in the form of edibles and drinkables, are a no-no as far as state regulators are concerned. Fortunately, beneficial insects and some plant-based and microbial-based insecticides are being approved for use on cannabis.

Valentin says some growers are hesitant to jump in with both feet when it comes to starting up a biological control program. They think they are somehow immune from certain insects that visit a cannabis crop.

“A common mistake we see is like, ‘I’ve never seen this being a problem in my operation, so I’m not going to get it,’” he says. “And they start off focusing on one or two pest problems and the one they think they’re never going to get is torpedoing their whole program.”

Whether you’re growing in a greenhouse or a building, sooner or later insects that are attracted to cannabis will visit your crop.

“We see that with hemp russet mites,” continues Valentin. “Growers say, ‘Well, we haven’t seen it so it probably won’t show up,’ then they bring in a batch of cuttings from another grower and they bring in the hemp russet mite.” He explains this particular mite is so small so as to be undetectable, even with a hand lens.

So, how exactly does one get started with a biological control program?

Education Is Key To Your Cultivation Success

Being able to identify and understand the life cycles of the insects that feed on your crop is a good place to start. Bear in mind that some of the plant- and microbial-based sprays are most effective during certain life stages, such as in the larval stage as opposed to adulthood. Often, cannabis and horticultural conferences will host workshops on the subject. After all, insects are insects, whether they’re attacking pot plants or benches of petunias.

“Going to conferences and to talks helps, to a certain degree,” advises Valentin. “What I think would be very helpful is to look at not just cannabis — for instance, the thrips cycle is not much different in cannabis than spring ornamentals. Try to learn what is happening on other crops.”

Being proactive and approaching pest management from a holistic, or integrated pest management (IPM) approach, is the key to success. Plus, good sanitation of your grow op goes hand in hand with an effective biological control program. A clean environment will increase success and ultimately be cheaper than fighting an insect problem in a dirty or contaminated grow room. A biological control program is about prevention, whether you’re using bugs or approved sprays.

Part of the learning curve to establishing an effective biological control program with insects is educating yourself about banker plants. These can be used to attract and feed beneficial insects by offering pollen and other plant material to your crop, so you have a good supply of BCAs on hand when the pest insects invade.

Beneficial insects won’t stick around if there are no pests to prey on, plus you need to build up populations of certain beneficial insects to have effective control. For instance, an aphid banker plant system can be established by planting cereal monocots including rye, barley and wheat, which support cereal aphids, and in turn provide a food source for the parasitic wasp aphidius colemani. The banker plants for A. colemani need to be planted as early as possible, since reproduction doesn’t occur for four weeks. The plants are then staggered every week or two to keep a steady supply of the parasitic wasps around.

Thrips can be effectively controlled by pirate bugs (orius species). This edacious hunter can kill up to 80 thrips per day and doesn’t shy away from other plant pests, including the two-spotted spider mite and moth eggs, according to Valentin. Pepper pollen is its favorite pollen food source. The compact ornamental pepper plant known as black pearl is the orius banker plant of choice. Orius is often used in conjunction with other biological controls, at least until significant numbers are established.

The mullein plant (verbascum thapsus), which has many healing properties for humans — including in the treatment of earaches, bronchitis, sore throat and sinus infection — is a host plant for dicyphus hesperus, which feeds on its sap. This BCA in turn feeds on the dreaded whitefly.

Banker plants, much like mullein, can be planted inside a greenhouse or out in the open. Valentin recommends you check with your state agricultural officials to see if there are any restrictions on having plants other than cannabis in your grow room.

The banker plant system has been around for a long time and is used successfully by vegetable and ornamental plant growers. 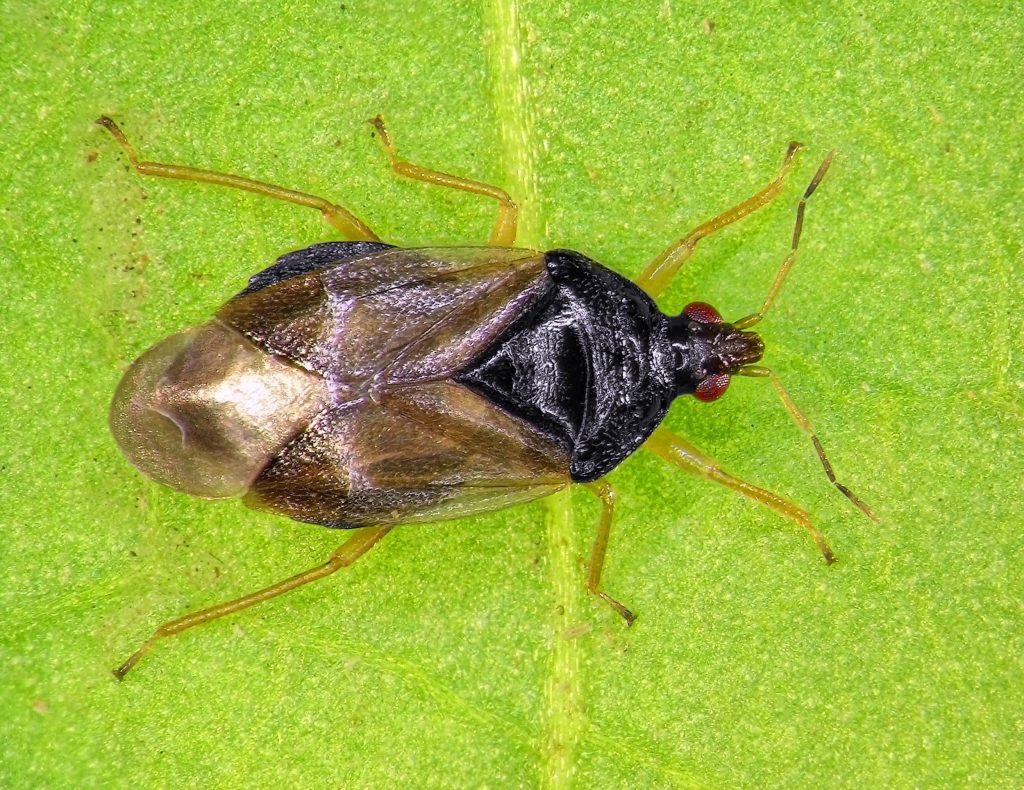 The pirate bug kills and eats other small insects, such as spider mites, that can be damaging to your cannabis crop.

The cannabis industry has been a little hesitant to approve any type of sprays on cannabis, due to the possibility of harmful residues being ingested by consumers and growers. However, several companies are now inching their way into the cannabis space by providing products that are safe for growers, the environment, and ultimately the end consumer.

“We’ve got products that don’t have any residues, so they aren’t going to fail any state tests,” says Lisa Malabad, product marketing manager at Marrone Bio Innovations, based out of Davis, California. Malabad adds that her team has been working with state regulatory agencies to help broaden the choices cannabis growers have for pest control, including approving the use of their microbial-based products.

Plant-based insecticides, such as the products offered by Marrone Bio Innovations, can be used in conjunction with beneficial insects, claims Malabad. For instance, Marrone has developed several microbial-based insecticides, including one called Grandevo, which contains active compounds that use different modes of action to, according the company website, “repel, stop feeding, reduce reproduction and induce mortality” of pests to prevent the development of sucking and chewing insects, including aphids, thrips, mites and whiteflies.

These products can be used in conjunction with predatory insects, can be tank mixed, and are usually applied on a weekly basis — unless, that is, a pest situation is getting out of hand, in which case it’s ramped up to every four to five days until things are once again under control.

As the cannabis industry continues to deal with its own growing pains and changing regulations that affect how pests can be managed, biocontrols seems to offer a light at the end of the tunnel for pest containment, especially when used as a preventative treatment rather than reactive. And there are signs that many growers are getting on board with these practices.

“Some of these operations have some really smart people who are doing it on a preventative basis, making sure nothing gets out of control,” asserts Malabad. “That’s actually the most economical way for growers to be managing their crops, and a lot of them are.”