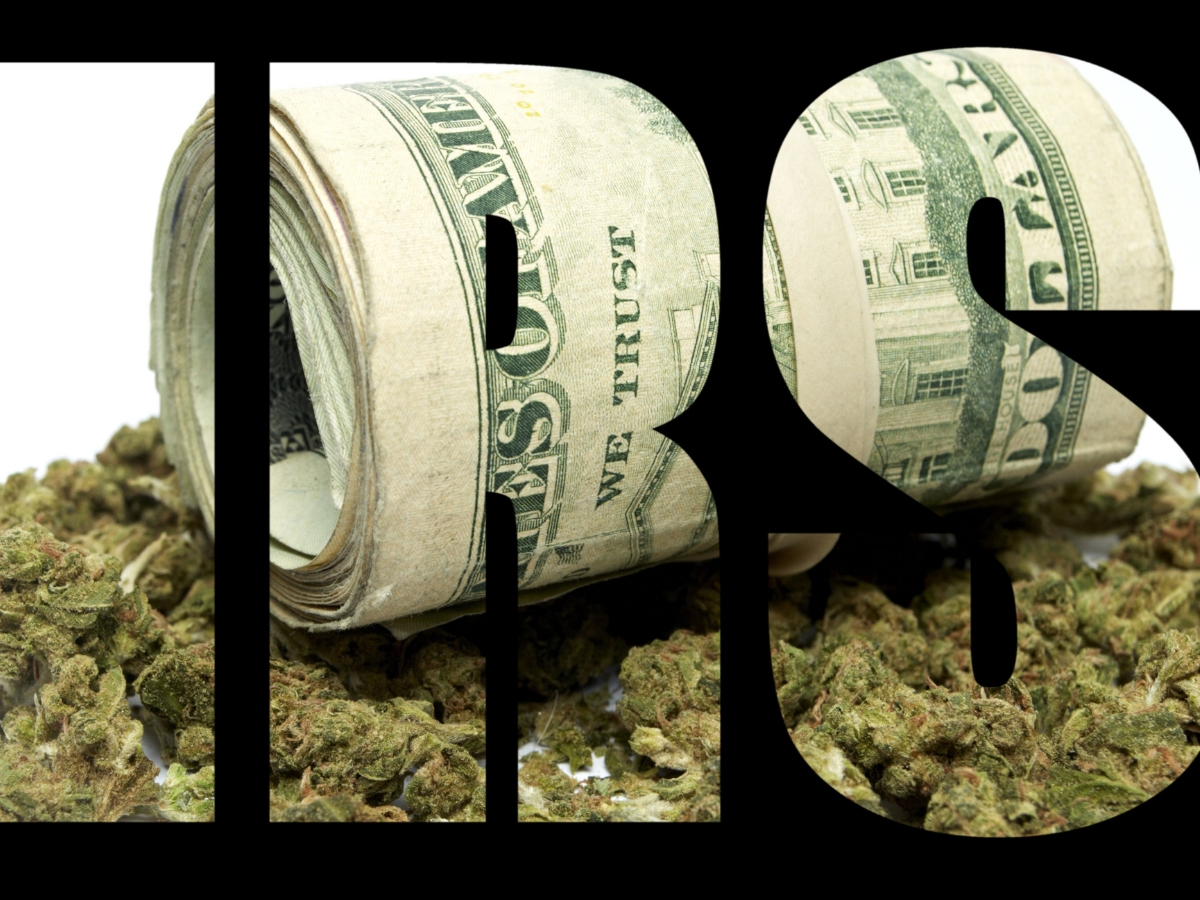 Cannabis may still not be legal at the federal level, but that doesn’t mean the US government will hesitate to get some of that hard-earned marijuana money.

The Internal Revenue Service is highly motivated to get its hands on industry dollars, and many cannabis business owners aren’t armed with the proper knowledge needed to protect large portions of their earnings from being siphoned into government coffers. The main issue is that cannabis-centric companies are prohibited from taking state and federal tax deductions — they are taxed on all revenue and aren’t allowed to deduct ordinary business expenses on their tax forms.

These restrictions are put forth in Section 280E of the US tax code, and many of the problems cannabis business owners run into are a result of not properly managing and planning for section 280E and how it pertains to their particular business.

“[Section] 280E basically says that if you are in the trader business of trafficking a controlled substance under Schedule I or II, you are not entitled to any deductions or credits against your income other than cost of goods sold,” says to Washington-based Dean Guske, a certified public accountant. “What you want to do, depending on whether you are a processor, producer, distributor or retailer, is to know what goes into cost of goods sold. Set up your accounting systems according to what kind of entity you want to do business as.”

According to The New York Times, the US government collected around $4.7 billion on nearly $13 billion in revenue from legal cannabis companies in 2017, but unlike other tax bills that are paid electronically or by check, the majority of cannabis business tax payments are cash transactions.

Guske and his firm have about 400 cannabis businesses on their books, so he has guided plenty of companies through issues related to 280E. “People get so worked up about 280E. Life is not fair. And taxes are not fair. I would like to see people get efficient at running their tax costs,” he says.

Giving an example of how businesses within the cannabis industry could be more efficient and forward-thinking, he continues, “I went into a dispensary years ago [where the owner] was saying, ‘I have a 280E problem.’ They had six budtenders in this dispensary and one customer. I was in there for a little while and they had another customer. I said, ‘How many customers do you get and how long are you open during the day?’ He said, ‘Twelve hours a day, we have six people and 35 customers.’ I said, ‘It’s not a 280E problem you have, it’s a spending problem.’”

Cannabis businesses also tend to fail when it comes to record keeping, which leaves them wide open to the IRS wringing more money out of their income. “They don’t keep records,” asserts Guske. “The funny thing about that is, early on, people were getting advice not to keep records because of recrimination, and that is a mistake.”

He also advises business owners maintain up-to-date job descriptions for all employees so they are aware of their expected duties and tasks, and to keep a floor plan so you can illustrate cost of goods sold in relation to the business. “If you have an employee that wears two hats, all the IRS has to do is prove [that person is] 100 percent dispensary worker, and then you don’t get that, say, joint-rolling portion on cost of goods sold.”

Sandy Suchoff, founder of The Canna CPAs, warns that cannabis businesses need to get “all their ducks in a row” when it comes to being audited, and dishes further advice to those operating within the retail cannabis space: “In retail, there is that much less you can deduct, because there are less inventoriable costs. Selling, distribution, nonproduction and administration expenses are all included. Think about your rent, utilities, insurance and nondeductible costs. There is a lot more phantom income.”

Suchoff also suggests leaving a paper trail when it comes to proving the business’s incomings and outgoings and providing proof to the IRS. “You can attach a PDF or JPEG to each individual expense — if they ask what that is, you can click on it. You have to be prepared, like with an insurance policy. Do everything you can to heavily document, to support your direct labor applicable to cost of goods sold.”

Giving a further example, Suchoff says any labor that constitutes production as opposed to sales and administrative duties was the area business owners must concentrate on. “This can come from clocking in, e.g., your staff punch in for budtending and then punch in additionally to do inventory,” she explains. “This is applicable to cost of goods sold and therefore deductible.”

Another big problem for cannabis-based businesses has been the confusion about how to style their company before launching it.

Denver-based tax attorney Nick J. Richards explains, “You need to know what you’re setting up before you start. The 280E creates phantom income. This means you get taxed for income you don’t have. If you are in an LLC or an S corp, that phantom income flows through to you personally and becomes your tax liability.”

It’s a “sure thing,” Richards says, that cannabis businesses will get audited come tax time. “You need to be ready when it comes. I like to say if you are a retail store, you are a C corp — period, end of story. If you are a grower or a manufacturer, you could be an LLC, but I would strongly suggest you are not. A C corp bears its own tax liability; it isn’t your personal liability, it is the company’s. At the end of the day, your company doesn’t have to pay its tax to live, but you don’t get stuck with that liability in the end.”

According to Richards, many cannabis businesses in Colorado have been severely stung because they set up as LLCs and then got audited. “And now they have million-dollar personal tax liabilities and they are really struggling to comply with 280E, and their businesses aren’t profitable. It is really tough.”

Richards has been a practicing tax attorney for almost 20 years, as well as an IRS trial attorney. Discussing the Form 8300, he highlighted that many cannabis businesses have run into issues with this filing, which generally requires they report cash payments of more than $10,000 to the federal government. And it also requires the US resident who is giving the cash for the transaction provide their tax file number.

With many in the profession handling large cash payments, they are undoubtedly leaving themselves open to scrutiny, and Richards reveals that some thought they could get around the rules by doing smaller transactions, which was just not the case. “You can take that [cash] sale one time and put certain things on the form to make that work. But if that same [payer] turns up again, they are complicit in the violation of that form. You have to call that person, call that business owner, and say, ‘You’ve got to send me someone who will give me the information. I can’t sell to that person any more, I am going to get in trouble with the IRS, there are criminal penalties for this stuff.’”

And in yet another stark warning, Richards advises cannabis business owners to not do anything sneaky in an attempt to keep the payments to less than $10,000, like, for example, conducting $9,000 in sales every two weeks: “That will get you in jail. That is a really, really bad idea. It is almost worse than not filing the form.”

What Can Cannabis Business Owners Do If They Are Audited?

Richards reveals there are ways of managing the tax debt a cannabis business could incur. Suggesting that “delay and avoidance” were two options, he says, “We can do that for a few years plus 4-percent interest, and eventually you are in a payment plan with the IRS.”

Unfortunately, cannabis businesses simply do not have the same options available to them as other mainstream business sectors because of how the cannabis industry is presently viewed by the federal government.

“I am sure you have heard those late-night commercials on selling your tax debt for pennies on the dollar,” Richards says. “Guess what? That isn’t available to the cannabis industry. Neither is bankruptcy.”

The advice is to pay tax quarterly, be compliant and transparent, as well as paying your IRS tax debt on time. “At the moment, the IRS is saying cannabis businesses don’t qualify for an offer and compromise,” Richards continues. “That seems to me to be an unreasonable position for the IRS to take.”

The reason for this position? Because the cannabis industry is so new and still in its infancy.

So, what are the steps a business must take as it goes through an audit?

“You get a letter from the IRS saying they will come down and spend two weeks sitting in your place of business with you and your employees. Don’t let them do that, they have no right to do that. Get a rep, and have them come down and sit with you in that rep’s office and look at the records in that office,” Richards advises.

“[The IRS] will demand they want to get into your facility, and you don’t want to be there. If you are my client, I don’t want the IRS to have a free shot at you unscripted while we are walking around the grow. We want to control that moment. We don’t want them asking unscripted questions of the employees.”

IRS officers are now demanding they do the walkthroughs of cannabis facilities because of the tactics they’re instructed to utilize when conducting an audit. Those officers can also get a court order and come down to your place of business accompanied by US marshals.

“What I like to do is make sure that [IRS] visit is going to work out in your favor,” Richards says. “I want them to walk in there and see the cost of goods sold. So, if you are my client, then all of your grow employees are wearing lab coats, and that one person behind the counter who isn’t, I want the IRS to come in and go, ‘Oh look at those 97 grow employees and one counter person, they must have a lot of cost of goods sold.’”

Guske adds, “I was [a tax] agent for a year when I got out of college and you’re given pretty good info on how to extract info out of people. You can incriminate yourself or say the wrong thing that takes the IRS down a path you don’t want them to go. They are definitely not your friend.”

Yes, I Cannabis: Making The Move From Employee To Independent, Professional Cannapreneur
This Is What Legal Cannabis In New York State Could Look Like