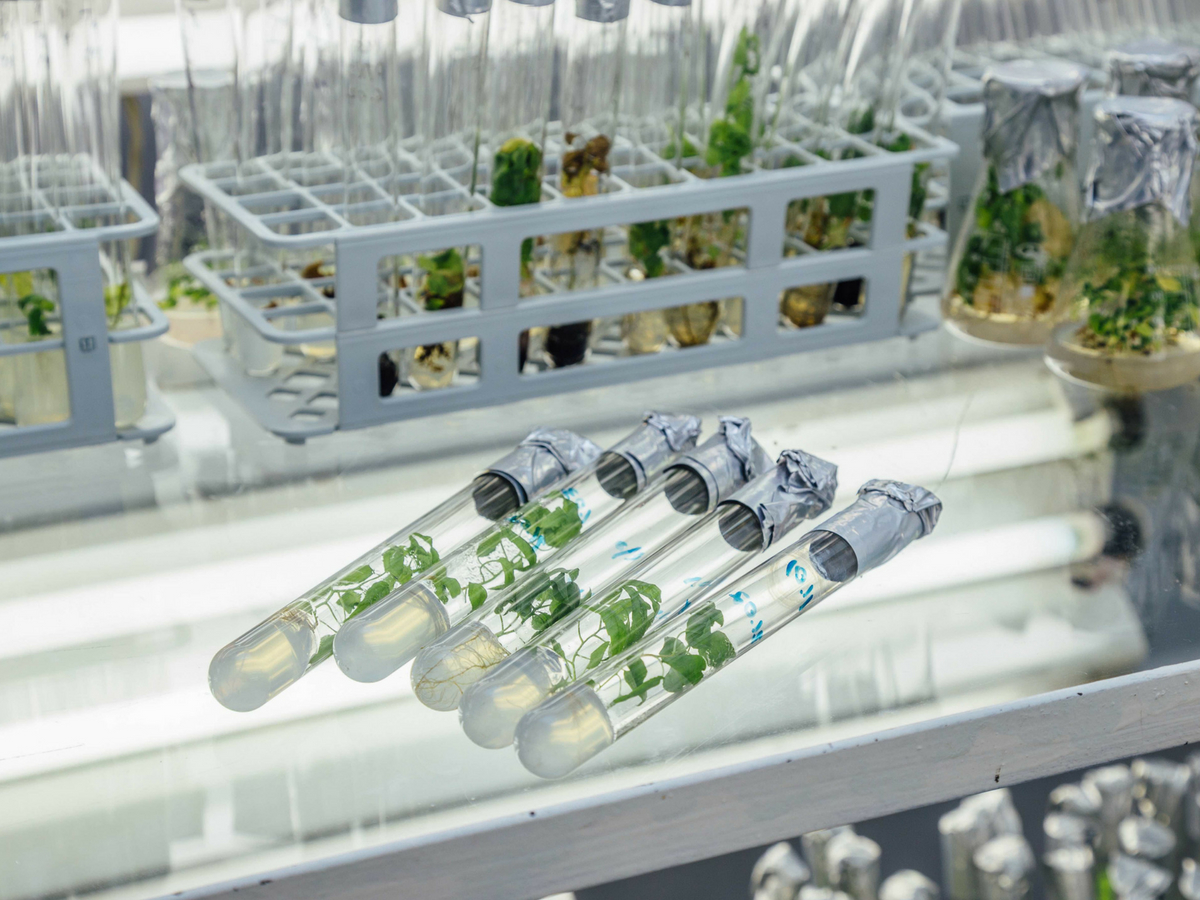 When most cannabis growers breed new plants, they use one of two methods: Starting plants from seeds, or cloning a mother plant. Growing from seed can be time consuming and ineffective, with only a certain percentage of plants germinating. Seeds can also be unreliable. If they’re not feminized, they can turn out to be male, which is likely a waste of your time. And if the male plant is allowed to grow in your environment, its sacs could burst open to accidentally pollinate your other plants. Additionally, their potency and other genetic traits are not reliably replicated, as you’re growing a new phenotype each time.

Clones, while faster to grow and generally more effective, can harbor and transfer any pests or diseases that may have been lying dormant in the mother plant. They also require the maintenance of a specific mother. On the upside, clones will be exactly as potent and effective as their mother plants, seeing as they’re genetic replicas.

However, when it comes to breeding cannabis, there is another method that has been around for decades, yet is relatively new to the grower community. Tissue culture utilizes the benefits of cloning, while taking it a step further. As with regular cloning, the plants produced from tissue culture are exact genetic replicas. Additionally, tissue culture doesn’t require the maintenance of a specific mother plant. Rather, any healthy plant can be used as a mother for tissue culture. This, along with several other benefits, makes tissue culture an exciting innovation in cannabis propagation.

According the Merriam-Webster dictionary, plant tissue culture — or micropropagation, or micro cloning as it’s known in the cannabis world — is “the process or technique of making body tissue grow in a culture medium outside the organism.”

So, what does that mean exactly? Essentially, plant breeders can take a tiny piece — even as small as a single cell — of tissue from a mother plant and multiply it into thousands of plantlets.

As noted in the 1993 New York Times obituary of Frederick Campion Steward, micropropagation was established by the professor in 1958 while working at Cornell University. Steward’s discovery illustrated that many plants store within a single cell all of the genetic information they need to reproduce, a term known as totipotent. Campion first discovered this using carrot tissue.

The use of plant tissue culture soon expanded into horticulture. Since tissue culture is a fairly expensive endeavor, in its infancy it was mostly limited to high-value horticulture plants such as orchids, and other rare nonagricultural plants that have an exceptionally low seed germination rate and are difficult to clone using traditional cloning methods. In recent years, however, micropropagation has been used for agricultural applications in certain crops that would otherwise be unable to reproduce or are prone to diseases.

Indeed, three international case studies by the independent advocacy initiative Agriculture for Impact on the use of tissue culture for agricultural use show how this complex process can help bypass common agricultural issues to help feed those in need, plus reduce the need for imports of certain crops that can otherwise be grown locally.

The first study, titled “New Rices for Africa,” examines a new crop of rice meant to improve yields of rice grown in West Africa, while remaining hardy enough to withstand the harsh climate in the region. This new crop was created by crossing the low-yielding but hearty African species of rice oryza glaberrima with the high-yielding but less hearty Asian rice species oryza sativa, with the new crop dubbed the New Rices for Africa, or NERICA. This crop, which was only able to be produced through tissue culture, ultimately helped Ugandan farmers double their yield, reducing by half the need for rice imports to Uganda from 2002–2007.

The second case study, titled “Tissue culture cassava in Colombia,” examined the development of an inexpensive and easy-to-implement tissue culture method developed specifically for the hearty food crop cassava, widely grown and consumed in Colombia. This staple crop was threatened by frog skin disease, which can lead to stunted root growth. Tissue culture helped create healthy clones of cassava that were easy to reproduce, allowing the crop to once again thrive in the region.

Similarly, the case study titled “Tissue culture bananas in Kenya” explores how tissue culture was used to help propagate healthy bananas in the African nation for a relatively low cost. The black Sigatoka fungus had been devastating East African banana farmers for decades. Since bananas are typically bred from a single mother plant, which can contain the fungus even if the plant looks healthy, bananas were vulnerable to this attacker and yields were suffering as a result. Tissue culture has helped farmers produce healthy banana plants, all while reducing the need for harsh fungicides.

These agricultural applications, which improved yields and reduced disease, make it easy to see how cannabis could benefit from the practice of tissue culture. 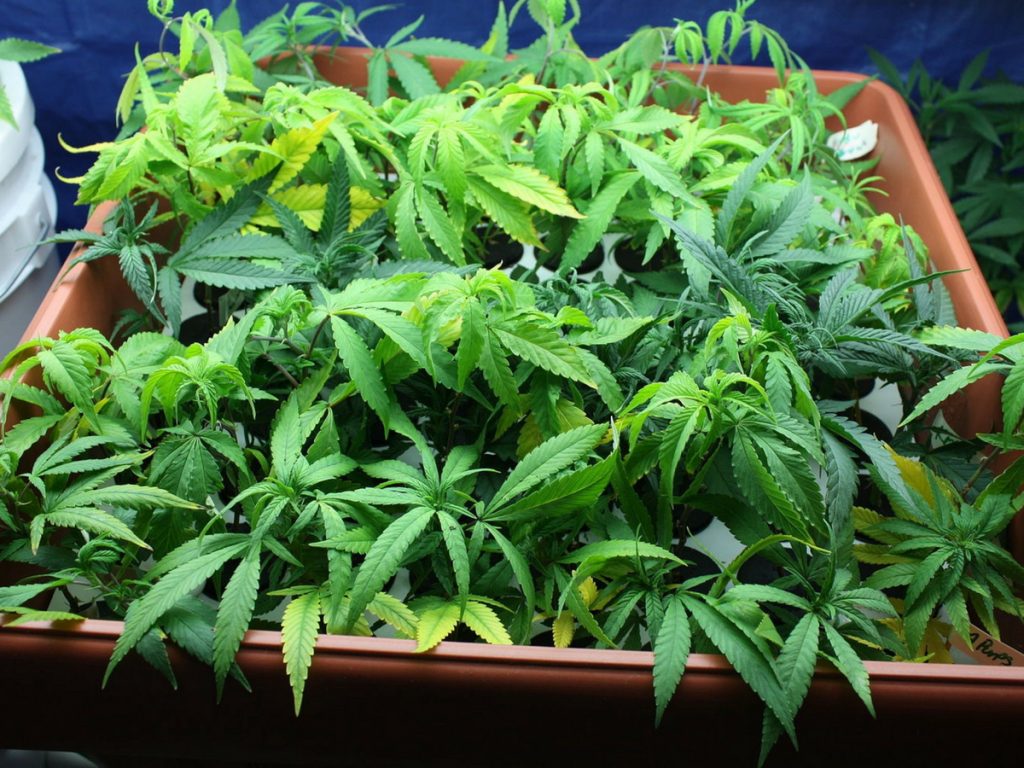 Clones can harbor and transfer pests or diseases that may have been lying dormant in the mother plant.

Cannabis is relatively easy to breed using seeds and clones, which may account for why tissue culture is yet to take over the cannabis industry as a means of reproduction. Still, with the cost of tissue culture coming down and the ease of of this breeding method increasing, there are many benefits to this cultivation technique that cannabis growers are now taking advantage of.

According to the study:

Because of allogamous nature of this species, it is difficult to maintain its potency and efficacy if grown from the seeds. Therefore, chemical profile-based screening, selection of high yielding elite clones and their propagation using biotechnological tools is the most suitable way to maintain their genetic lines.

Further, the study’s authors found that a “100 % conversion of encapsulated explants was obtained” using their method in a tightly controlled lab environment. Like regular clones, since they are in fact an exact clone of the mother plant, all of the potency and efficacy of the mother plant is maintained.

One added perk of tissue culture is that due to the extreme vetting of mother plants, and the incredibly sterile environment needed to carry out the process, it’s less likely than with regular cloning that you’ll pass on systemic diseases like powdery mildew. It is still possible, but with enough care, tissue culture remains a perfect method to help avoid systemic disease and pests while maintaining a pure genetic lineage.

Perhaps the most appealing benefit of tissue culture when it comes to cannabis cultivation is volume. With just a few plant cells, a new plant can form, meaning one mother plant can produce thousands and thousands of new plantlets — numbers that could simply not be reproduced using typical cloning methods. Additionally, tissue culture takes up less space. 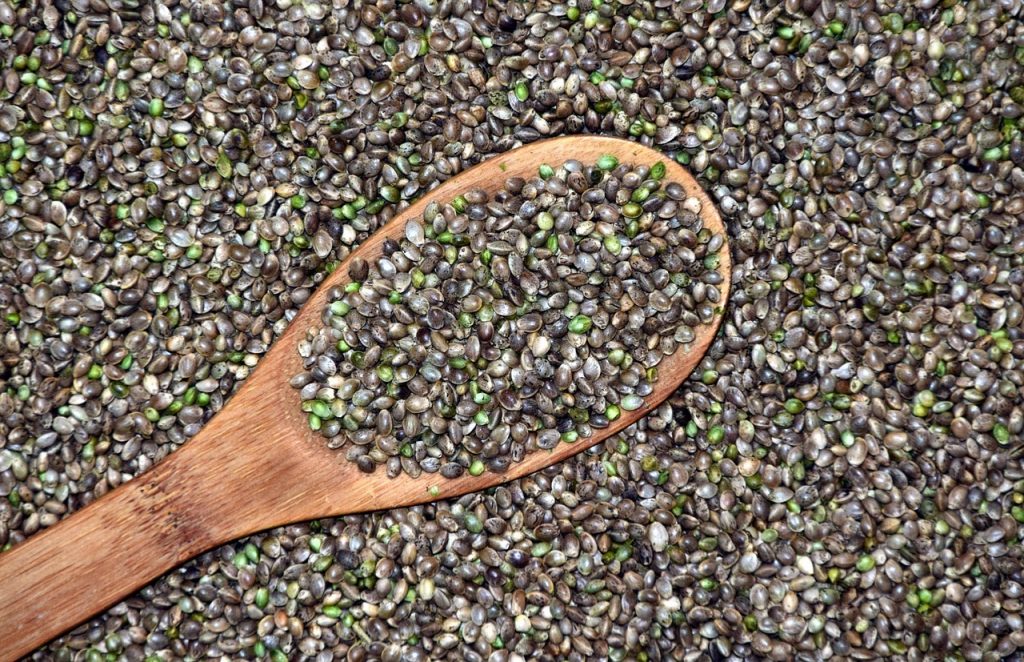 Growing cannabis from seed can be time consuming and ineffective, with only a certain percentage of plants germinating.

So, we’ve established that tissue culture is an extremely effective method to propagate cannabis. Now comes the tricky part: Actually doing it. Below is a step-by-step process that you can follow to introduce tissue culture in your cannabis grow.

This whole process takes about a month, which is longer than when typically cloning cannabis. The benefit, however, is in the volume of marijuana one can produce. The extra time is worth it for most growers, as you’ll get so many more clones using micropropagation.

Since one of the primary benefits of tissue culture for cannabis is in the volume, it is a method perhaps best utilized in larger grow ops, although small-scale or hobby cannabis growers may enjoy experimenting with this technique as well. And as with most genetic technology, the price and scale at which it’s available is becoming more and more affordable, thus opening up the tech to growers who may have previously been unable to benefit from it.

Whether growing on a small or large scale, there are several tissue culture kits available online to help you achieve desired results and that will of course come with their own instructions. As the science and technology of tissue culture becomes more accessible, this sci-fi-seeming breeding method has never been more doable.

Getting High In The Heartland: Red States Turning Green For Ganja
Drug Recognition Expert Training Could Potentially Roust The Innocent