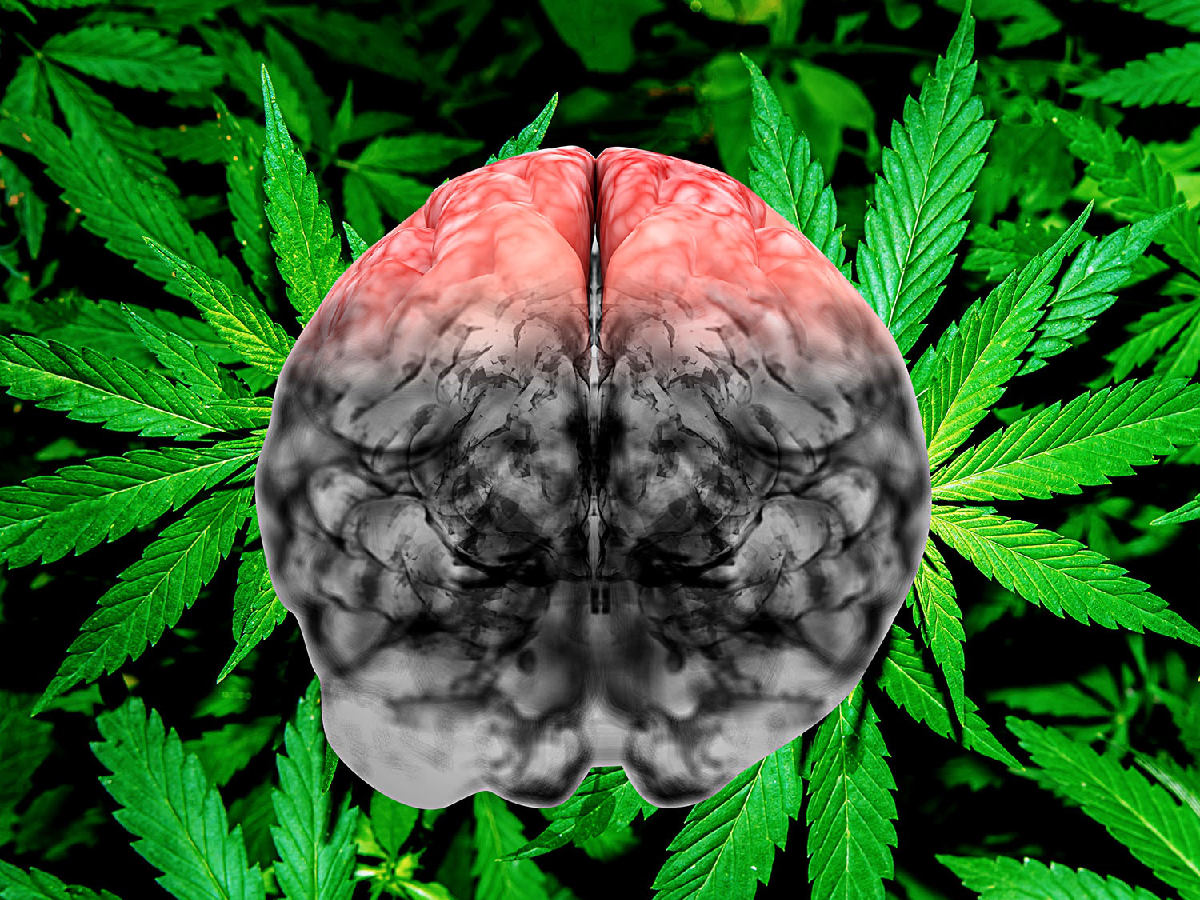 Crimson red is the sound of a car door slamming shut. Lemon yellow is a church bell in full swing.

Ellen Gutierrez leans back and surveys her painting so far. The half-finished canvas stands a few inches taller than her 4’11” frame. Already several different shades of paint are streaked across the edge of the freshly rolled joint she lit up 10 minutes ago.

“See, look at this,” she says, pointing to a strip of the abstract painting she’s created, with two small but very deliberate red marks the size of a tiny fist in the corner. “That’s a VW Bug door slamming.”

If I squint, it does appear to be something like a door being slammed. But as I sit and watch her paint (and enjoy some of the joint with her) that color looks more and more like the slamming door of a Volkswagen.

Gutierrez turns back to her work and fires more color at the canvas. She seems to have six arms as she relentlessly goops on the paint.

And then that lemon yellow that sounds to her like a bell.

Pausing only to take a drag off the joint, she is engrossed and mesmerized. She works for 15 minutes straight without so much as a peep.

“Sorry, I get pretty focused when I paint,” she eventually says. “Particularly when I’m high. I feel these sounds that connect to specific colors. Like that shade of yellow, in my mind, could only have been a church bell clanging. It’s so wild and so vivid.”

The Los Angeles painter says when she hits this zone of micro-focus, mostly when painting and high, “it’s like colors and sounds wash together.”

What she’s experiencing is a version of a sense perception known as synesthesia. A perceptual phenomenon in which stimulation of one sensory or cognitive pathway (in her case, viewing color) leads to reflex experiences in a second sensory pathway (sound).

She’s not alone. Many artists have experienced synesthesia in a variety of different ways. Jazz legend Duke Ellington associated musical notes with color; and author Vladimir Nabokov related different words and letters of the alphabet with very particular sensations — like the letter R signifying, he said, “a sooty rag being ripped.”

Celebrities from Snoop Dogg to scientist Carl Sagan have espoused the virtues of getting high and creating everything from great beats to avant-garde cosmic views. Comic Sarah Silverman, who famously unveiled her cannabis oil pen on the red carpet of the Emmys a few years back, has no doubt been motivated by the art-inspiring plant.

In Gutierrez’s case, she says cannabis helps her feel the combination of color and sound more acutely.

“I love it, because it feels like something that I can turn the volume up and down on with pot,” she says. “It’s not like I don’t feel these things when I’m not high, but it’s definitely a heightened sensation when I am [high].”

There is, of course, a long list of notable artists who’ve used consciousness-altering substances to create great art — Vincent van Gogh and absinthe; Samuel Taylor Coleridge and opium; and Aldous Huxley wrote the groundbreaking philosophical essay The Doors of Perception all about a mescaline trip he experienced one afternoon, pondering art and the universe.

So, it’s no wonder that today, with legal marijuana more available in the US than it has been for decades, that artists nationwide are enjoying cannabis while creating.

Thinking Beyond The Box

Cal DiCostanza has played the piano for more than 30 years and explains that he has an interesting relationship with cannabis and his art.

DiCostanza relates how after a few tokes of weed and sitting down to play, he tends to let his mind wander on thoughts of the outdoors. “I get this sense of sitting on a quiet hill or watching the ocean and feeling the measures of nature,” he explains.

After a few minutes, those thoughts of nature help him see the space between the notes.

“I’ll literally envision rolling waves in the sea, way far out in the ocean,” he says. “That pulse gives me like a bassline beat. Then I’ll layer that with these other mental images. It’s so integral to what I do now when I sit down to compose a tune, I really don’t even have to think about doing it.”

He describes those thoughts while playing and high as “relaxing yet computational, like all these barriers are lifted.”

“It’s like I’m adding up all these musical calculations in my head, all these notes, particularly when I’m trying to make a breakthrough composing a piece,” says DiCostanza. “And somehow, bang! There’s the answer.”

What he’s describing is a mental process that relies on divergent thinking, a method of solving problems while reeling through a variety of possible solutions to find the best one that works. Because cannabis has been known to remove the barriers that inhibit expression, its use can often present new possibilities and “aha” moments — or thinking way beyond the box.

The science on this is of course evolving as medical professionals and government officials slowly realize the upsides of cannabis. With the majority of North America now solidly pro-marijuana, it’s just a matter of time before science catches up with what cannabis users already know — that the plant holds some pretty incredible qualities that can no doubt expand the human experience.

Gutierrez admits that it’s not cannabis alone that makes her an artist, saying, “I’d be an artist with or without pot. But it definitely does enhance these creative moments and points me in the direction to focus better.”

She turns and whips up a new batch of bright paint with her palette knife — a little yellow, a little green, some cobalt — working at it like she’s beating eggs for an omelet.

Pausing to look at her painting again, a blob of turquoise paint poised and ready on her palette knife, she smiles and says, “This color is definitely big, loud footsteps in the hallway.”

Give Your High-Value Plants The Gift Of Organic Ancient Earth
Once Upon A Time In Mexico: Growing a Marijuana Strain Bred from Oaxacan Highland Gold