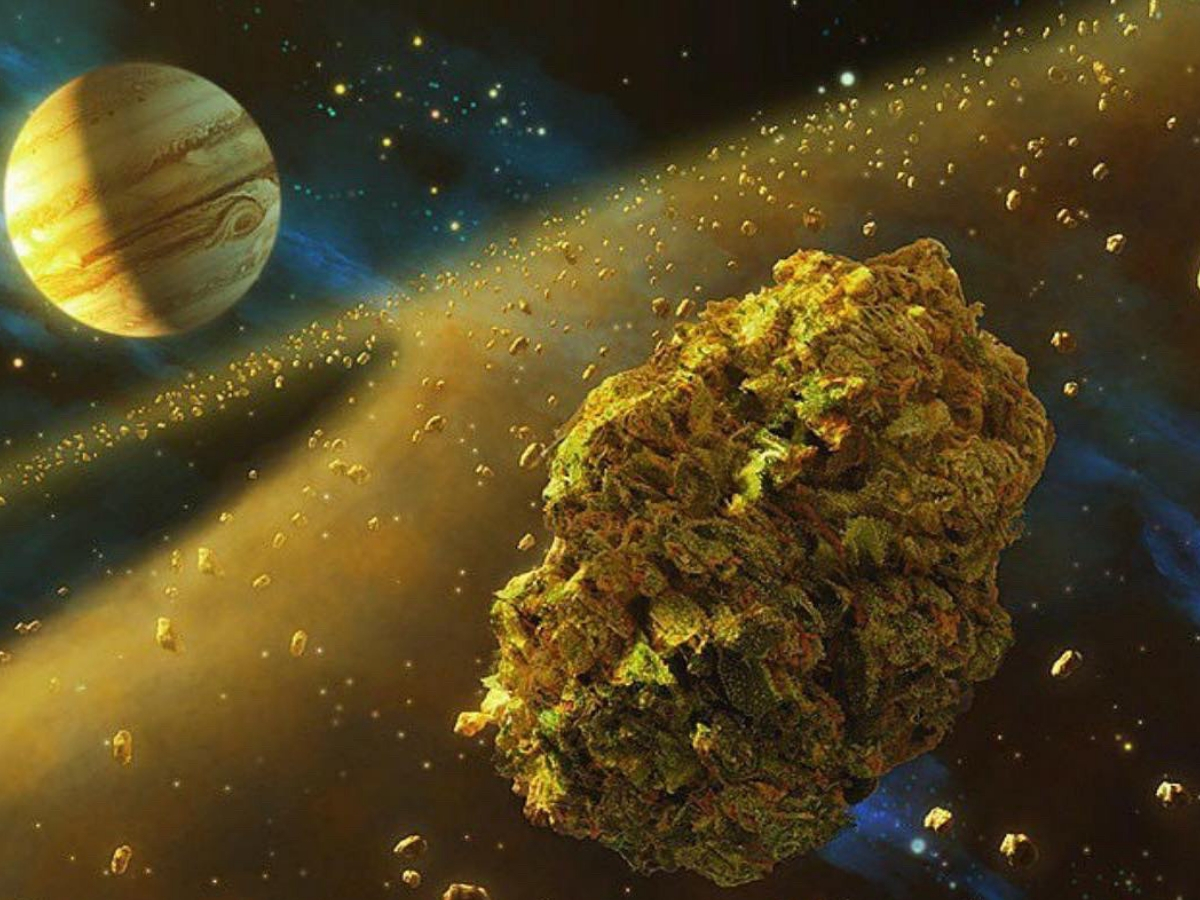 As Earth continues the process of expelling the parasite that is humanity through an increasingly hostile climate and natural catastrophes, we bipedal machines of destruction are looking to the stars for a haven. If the past 50 years of sci-fi literature and recent glut of space-pointed TV and movies are any indication, we’ll be exploring the stars and bringing with us our resource-gobbling ways in short order.

When, and if, this post-Earth existence begins, there are plenty of reasons to believe cannabis should be a part of it. Cannabis has technically left the atmosphere already, when space-access specialists Sent Into Space collaborated with Scottsdale, Arizona, cannabis dispensary Level Up to send a pound of Thin Mint GSC into orbit as an experiment to test the effects the change in atmosphere would have on weed.

When it comes to the heavens, some of the biggest thinkers among us were known habitués of the herb. Cosmos creator and astrophysicist Carl Sagan’s pot proclivities were particularly well-known. Sagan was a longtime consumer and advocate for the legalization of cannabis, writing in a 1971 essay for psychiatrist Lester Grinspoon’s book Marihuana Reconsidered under the pseudonym Mr. X:

The illegality of cannabis is outrageous, an impediment to full utilization of a drug which helps produce the serenity and insight, sensitivity and fellowship so desperately needed in this increasingly mad and dangerous world.

Strides have certainly been made on the legislation front since Sagan’s essay dating back nearly five decades, but there is still much progress that needs to be made and additional benefits ripe for discovery. It’s unfathomable what government-funded, open-ended research of the plant will lead to in the fields of medicine, science, textile and design, fuel — and even when it comes to the creation of habitable ecosystems on distant planets. It’s purely science fiction for the time being, but cannabis could be (back) in space sooner than we think.

Getting Maximal Medical Marijuana Benefits In The Stratosphere

Cannabidiol (CBD), the non-psychoactive chemical compound of cannabis, could be a valuable substance for astronauts, and is just one of the earliest projections for cannabinoid-based medicines that may be beneficial to humans who leave behind the comforts of Earth.

Bioengineering company Space Tango currently has two micro laboratories on the International Space Station, where it’s growing cannabis in microgravity to gauge the medical potential when cultivated under such special conditions. The absence of gravity could create exciting and novel reactions in the plants themselves, which Space Tango described to Forbes earlier this month.

Charles McElroy, founder of Goldleaf — a leading producer of journals designed for patients, growers and enthusiasts — is an avid follower of the expanding data proliferation and its applications for cannabis. He believes the medical uses of cannabis will make it appealing to potential space dwellers and future planetary colonists.

“I could see certain cannabinoids benefiting modern astronauts — for nausea, improving circulation or aiding inflammation. I don’t think the strong psychoactive traits would be very useful or pursued by space programs right now, though. Space is still pretty volatile, and I imagine we want our astronauts to be ready for anything at any moment.” 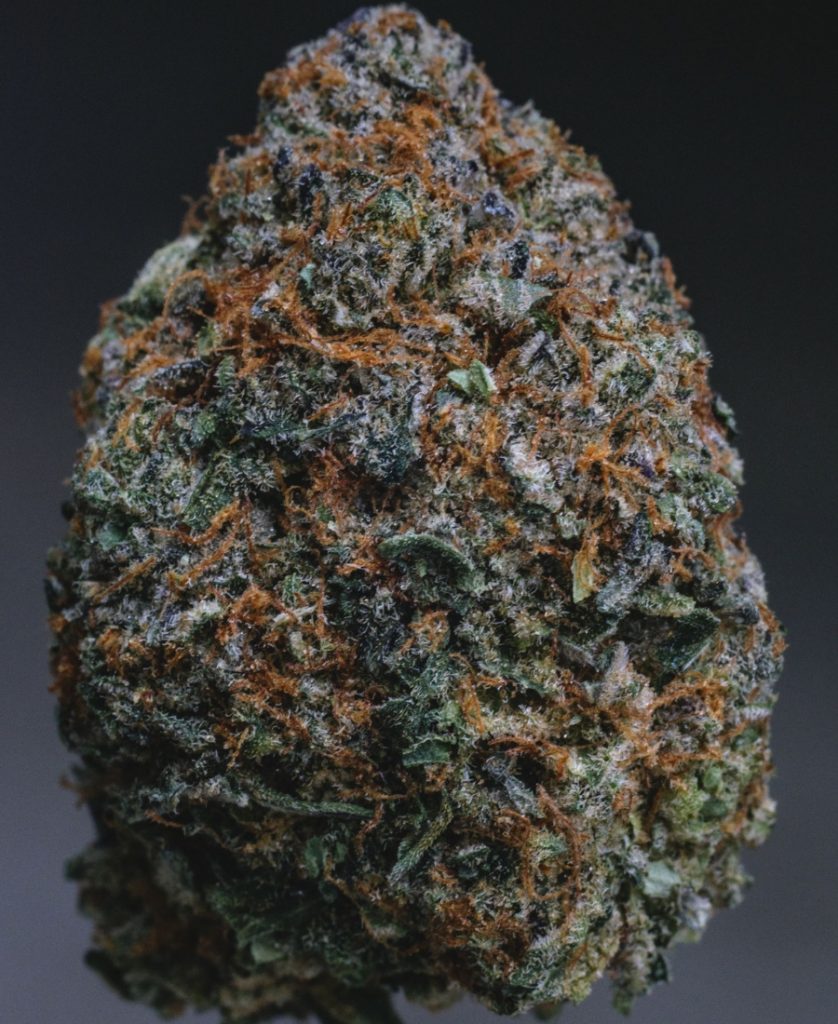 The Versatility Of Cannabis

Within our society, the cannabis plant has always been used for more than just ritual and intoxication. It was instrumental in the colonization of North America, largely due to hemp being used as a textile for sails and ropes, and its purpose as a raw commodity to be deployed in practical uses is continually being reimagined.

McElroy sees the versatility of the plant as a major reason to consider it among the few commodities that will be coming with us if we ever depart the Earth for, ahem, greener pastures.

“I’d bet that it will come into play in a big way,” McElroy tells Big Buds. “Namely, the industrial applications of cannabis. It can be a stable, lightweight and inexpensive building material, as well as fuel and fiber. I don’t know how these factors would be deployed, but I’m confident that as we continue to drain Earth-side resources, these alternatives to plastics and fossil fuels will become that much more essential and common to the way we approach technology and constructions.”

McElroy says the search for new reduced-harm and high-performing materials is often spearheaded by space engineering. “I could see NASA and other space programs investigating the application as an alternative to plastics — leave it to NASA to come up with new methods of production and applications before anyone else. They are the inventors of baby formula and computer mice, after all.”

The edible qualities of cannabis leaves and seeds have never been abandoned by us earthbound humans, and McElroy thinks this is a major boon for space travelers.

“Cannabis is very prolific — packed with potential energy and nutrition. You can take seeds to space to plant a garden for continued nourishment as you travel. Cannabis grows fast, is hearty, and is not only edible but offers superfood qualities. It is a complete protein, full of omega fatty acids, amino acids, minerals and more.”

This doesn’t even count the roots, stems and buds, which aren’t really edible but can be juiced for their nutrient content. It also illustrates how the plant itself is so incredibly useful and versatile, since all parts can be utilized in one way or another with very little waste.

Many of the earliest advocates of cannabis touted its environmental potential. It is known as a fabulous choice for phytoremediation due to its growing speed and root structure that can easily remove intoxicants from the environment like a sponge (though it can deplete soil of nutrients if not grown responsibly), as well as its ability to oxygenate the air. For these reasons, cannabis is a handy addition in a colony botanist’s tool kit, as it’s now clocking four major functionalities: practical/engineering application, biological nourishment, medicinal benefits and environmental stability.

As for the totality of cannabis’s importance to space travel, we’re only projecting based on what we know now, but the potential is truly endless. McElroy thinks cannabis makes a wise choice for the long-haul journeys awaiting humans who may leave the atmosphere.

“I speculate it would be among the top choice of botanicals to bring to new worlds, especially once terraforming is complete or in a biosphere type of construction, again, because it is both nutritious and medicinally applicable. I think any colonist would rely on it heavily, and they would be the ones to really lean on the medical applications.”

While seeing the seven-pointed leaf deployed into the stars may not be such a wild concept, it may be wise to test the practical applications first before blazing up, as famous space brain Neil deGrasse Tyson told TMZ.

“Well, the problem is, in space now, many things will kill you,” he said. “So, if you do anything to alter your understanding of what is reality, that’s not in the interest of your health.

“So, if you want to get high in space,” he continued, “lock yourself in your cabin and don’t come out because you could break stuff inadvertently.”

Chasing The Legal Green? Here’s How To Successfully Invest In Canada’s Pot Stocks
Name That Strain: These Are The Best Cannabis Flavors Of 2018