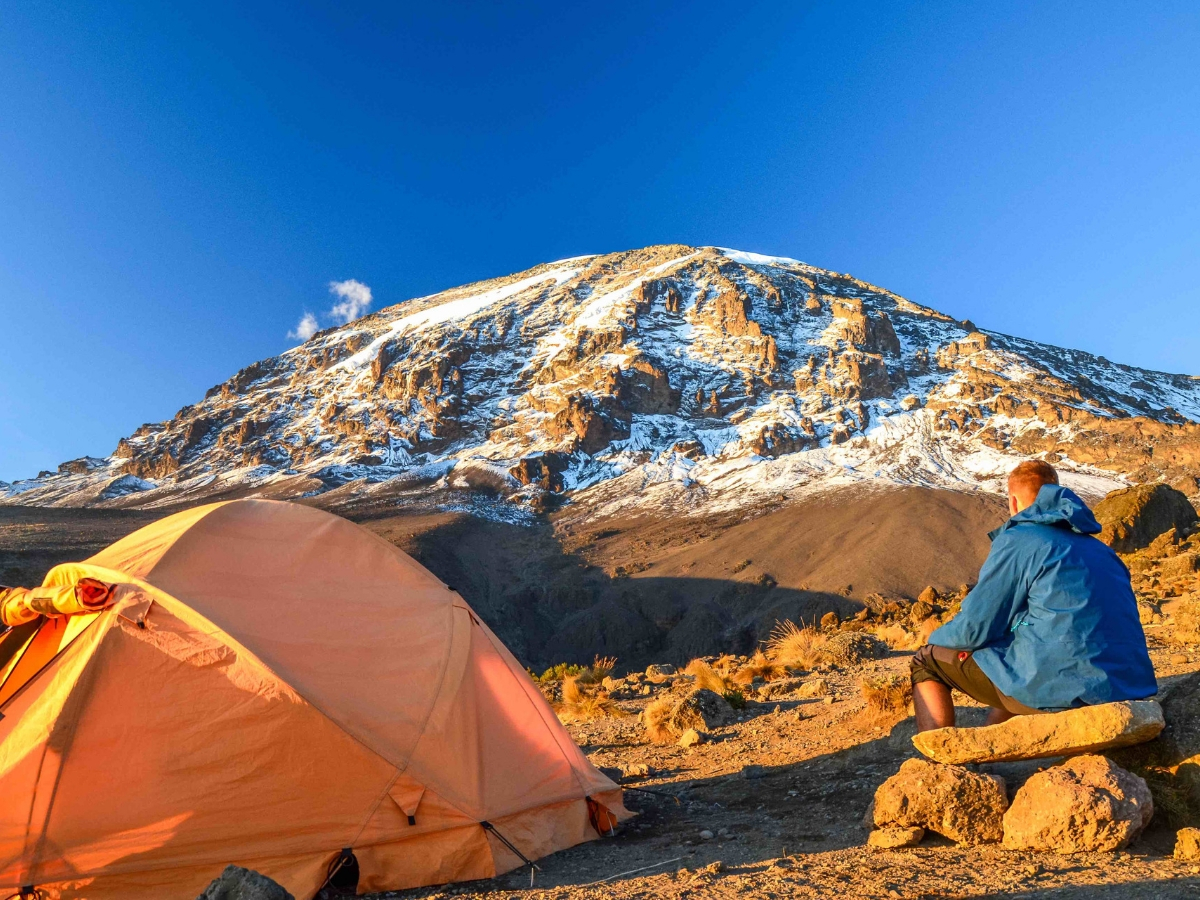 This is not a heroic tale.

It is, however, the semi-delusional story of a dozen people headed up Mount Kilimanjaro — Africa’s highest peak at 19,341 feet — and the one smart guy named Tony who puffed a little cannabis along the way and smoked us all while we vomited, gorged on prescription pills, and didn’t sleep much at all.

Kilimanjaro is a beast. Let’s start with that.

The hike up this huge mountain in Tanzania is a protracted, uncomfortable excursion that generally happens over a span of six to nine days so as to avoid altitude sickness caused by ascending too fast. But it’s a manageable beast if you prepare for it, have decent hiking boots — or if you’re like Tony and smoke a little weed to experience something like the British Journal of Clinical Pharmacology’s finding that small doses of THC can aid in bronchodilation, or expansion of the bronchial air passages, thus increasing airflow to the lungs.

There are two key factors to know about Kilimanjaro, besides the obvious fact that it’s a high-altitude ascent and that the vast mountain actually creates its own weather system, with summit nighttime temps ranging from 20° to -20° Fahrenheit.

First off, it’s not a climb at all. It’s a walk. It requires exactly zero technical skills or equipment, like ropes, harnesses, crampons or ice axes. It gets some play as being a climb because it’s one of the celebrated seven summits, alongside Denali, Aconcagua, Vinson, Mont Blanc, Puncak Jaya and Mount Everest. But Kilimanjaro is really just a very long walk that often feels like you’re ascending the tallest building on the planet over and over again, step by brutal step, six days in a row for approximately six to eight hours a day.

The second thing to know about Kilimanjaro is it’s dead boring after a couple days. Unless you thrive on nature and endless walking. It’s beautiful and the terrain is incredibly diverse, including grassland, rainforest, moorland, alpine desert and a glacier summit. But over the course of many days and increasing altitude strain on the mind and body — as you rise 15,000, 16,000, 17,000 feet — the visuals begin to meld into one big view of your feet trudging forward through the dirt.

This is another great reason why smoking a little green can be a genius maneuver. Marijuana is a total boredom buster.

But summiting Kilimanjaro is also brutal in some ways. Most bodies aren’t accustomed to breathing at altitudes over a few thousand feet, unless you’ve acclimatized to that elevation. Acute mountain sickness (AMS) is a specter plaguing the body the entire way up the big slope. I’ll never forget seeing my friend dive past me after dinner one night and projectile vomiting a liter of mostly liquid like a fire hose due to altitude sickness.

Acute mountain sickness can occur when a person travels too high in too short a time and can sometimes be fatal. Ranked by mild, moderate and severe, the mildest form of AMS feels a lot like a bad hangover, with headaches, nausea and loss of sleep. As the condition worsens, symptoms include vomiting, loss of coordination, and shortness of breath. At its most severe, AMS can produce lethal conditions like pulmonary and cerebral edema, caused by excess fluid in the lungs and brain.

I like nature well enough, but I also like not having a searing headache and not experiencing nausea and not potentially dying. So, like the rest of our crew, I gobbled Diamox — the prescription medication that helps to prevent AMS — and ranted on like everybody else about how many milligrams I was taking and the myriad side effects I was feeling from the meds, which included dizziness, lightheadedness and loss of appetite. All of which, incidentally, were similar to the altitude sickness symptoms we were trying to prevent by taking the Diamox.

I first saw Tony enjoying a couple puffs of something while he leaned against a rock for rest about 100 feet ahead of me. I thought it seemed weird that he was smoking a cigarette at that altitude, but there he was, smoking away. We were at 15,000 feet or so and the group of us was no longer clustered together like the first couple days. We’d hit the boredom stage pretty hard by days three and four and each of us was now content to walk alone through the wilderness terrain accompanied by our thoughts, rather than repeating the same old conversations day after day.

When I finally got to where Tony was, he’d already continued up the hill again. But in the air by that rock was just the faintest aroma of something familiar. The unmistakable scent of cannabis.

It bowled me over at first, that Tony was smoking weed on the mountain while the rest of us were having trouble with basic breathing and mounting nausea. In fact, just the day before, one of our crew had developed something called Khumbu cough, likely due to bronchoconstriction — or a narrowing of the airways that can occur at high altitude — and had dislocated a rib from nonstop coughing. And that same day, there was a helicopter rescue of a hiker that was reported to be suffering from AMS.

We gobbled more Diamox and prayed we didn’t get altitude sickness. But it wasn’t just that medication that people took to cope. At least half of our group also took the sleep aid Ambien at night. The headaches when trying to sleep were horrible. You could hear your blood pounding in your ears all night from the elevation. And because dehydration is a big threat at high altitude, guides encouraged drinking copious amounts of water — a suggested 4 to 5 liters each day — which meant getting up repeatedly throughout the night in the freezing cold to relieve yourself. All of which made sleep near impossible to attain.

But Tony didn’t take Diamox or Ambien. He rolled the occasional pinner joint, which probably provided him with better lung capacity than any of us, as well as helping prevent nausea and sleeplessness. He fared better than any one of us on the mountain.

On the sixth night of the trip, after a midnight wake-up call and seven straight hours of marching up switchbacks, we finally summited the mountain at dawn and stood at 19,341 feet. It was bitter cold, and I was completely sleep deprived by then, but the view from above the clouds (literally) was exhilarating. Looking down the mountain a distance of what felt like hundreds of unobstructed miles, you could make out the curvature of the earth on the horizon. That’s how high up we were.

Plodding back down the mountain, dialing back all those days of uphill marching and now going straight downhill in about seven hours’ time, I ran into Tony again.

There he was, taking a break and rolling another pinner joint. He lit it and passed it to me. I was so delirious I honestly can’t remember if I took a tug or not. If I could go back now, I absolutely would take a toke with him. But I do recall clearly the look on his face as he took a slow and steady pull of that joint, and as a Cheshire cat grin formed on his face, he said, “What a beautiful trip, huh?”

Mormons Vs. Marijuana: How The Church Has Come Out To Crush Medical Marijuana In Utah
Florida Democratic Politician Hit By Wells Fargo, BB&T Discrimination For Accepting Cannabis Campaign Money