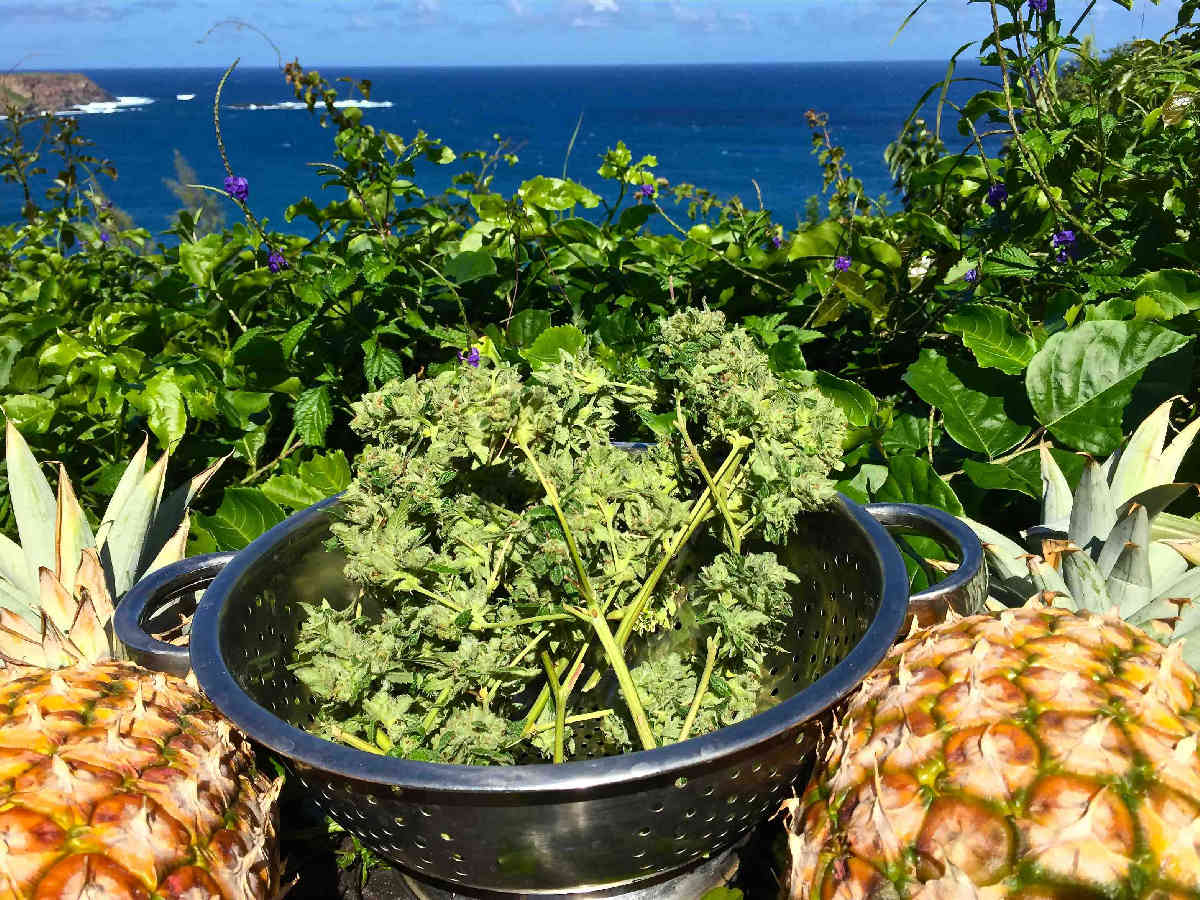 We’ve had two previous articles about growing marijuana in Hawaii.

We also noted Hawaii is now the only state to ban the kinds of discrimination we in the marijuana community commonly experience at the hands of landlords, employers, and child custody judges.

Now we talk about tactics to help Hawaii marijuana growers, and many of these tactics also apply to growers in other states and across the world.

Hawaii’s electricity supply should be mostly generated by solar and wind, but instead it comes from a primitive energy grid that uses fossil fuels to generate electricity.

That’s why Hawaii marijuana growers pay as much as five times more per kilowatt-hour for electricity than people in the rest of the country.

What they do is create a hybrid grow op.

A hybrid grow op uses an outdoor greenhouse or other enclosure to take advantage of the strong tropical sun available in most parts of the Hawaiian Islands.

The plants are put outside during the strong-sun part of the day and back into the artificially-lit indoor grow up when the sun isn’t shining.

The indoor grow op doesn’t rely as heavily on high intensity discharge (HID) hydroponics lighting as growers do on the mainland.

Instead of having all HID lights, the grower may have a mixture of HID with plasma and T-5 lighting.

The grower also staggers the lighting so that although some light is on in the indoor room when it’s lights-on cycle for that 24-hour period, it could be only the T5 or plasma for a few hours with the HID being shut off, especially during hours when there are high temps outdoors.

Cooling the grow room is another electricity hog.

Hawaii marijuana growers try to get the most efficient venting, exhaust fans, and air conditioning units they can afford.

They experiment with air-cooled and water-cooled lighting to see if it’s cheaper to run that than to cool the entire room to remove HID heat.

Hawaii marijuana growers registered on the state’s medical marijuana list are allowed to grow their own meds indoors or outdoors.

Most grow outdoors because the cost and hassle of growing indoors is high.

For one thing, it’s a tropical sun/daylength there. As soon as people’s clones or seedling are rooted, the plants see way less than 18 hours of light per day and immediately go into flowering.

Even on the longest days, the sun is barely up 13 hours per day.

These daylengths make marijuana plants go into flowering phase, even when the plants are barely-developed seedlings or clones.

If an outdoor marijuana grower relies only on sunlight, the cannabis plants flower early before they’ve gotten much height or branching, and they don’t have enough light to maximize their bud size and cannabinoid production.

Growers who want well-developed, established plants that yield more than an ounce per plant max need to provide extra lighting to get the daylength to 18 hours per day in grow phase.

One of the most popular indoor lights used by Hawaii marijuana growers is the Hortilux T5 PowerVeg bulb.

Some Hawaii marijuana growers use genetics adapted to Hawaii daylength, but these genetics are rare and plants don’t get very big before they start flowering.

These cultivars are often called “pakalolo.”

The other big problem is that growing outdoors exposes plants to the many bugs, molds, mildews, and diseases that are plentiful in Hawaii.

Budworms, gray mold, ants, animal predation, and other attackers make it imperative that growers use greenhouses so they get the benefit of outdoor sun and wind and yet at the same time the plants are protected at least somewhat from their enemies.

I know growers who had 5-6 plants and picked 300 budworms off of them.

You need to pay close attention to your plants on a daily basis and hand-manage pests. You don’t want to spray poisons or even so-called safe materials on your crops, especially after buds have formed.

Another problem comes from humidity, which can be crushingly high, especially on parts of Maui and other islands where it’s a rainforest situation and your marijuana plants could be drowned by many inches of rain per day.

High humidity also makes it necessary to spend money on air conditioning and dehumidification for drying and curing buds.

Add to that, on the Big Island an active volcano generates massive tonnage of acidic, sulfuric air pollution called VOG, that can kill or contaminate plants.

Again, Hawaii marijuana growers should if at all possible grow in a hardened indoor grow room or at least a greenhouse.

The good news is that despite the high costs, unfriendly weather, 12-12 outdoor daylength, heat, buds, gray mold, rain, winds, rippers, and other hardships of growing marijuana in Hawaii, the bud produced there can still be some of the tastiest and strongest you’ll ever find.

And it’s legal to grow your own.

Hawaii marijuana growers have been growing fire bud for years.

They’re not eager to give that up and pay higher prices for indoor weed grown by someone else.