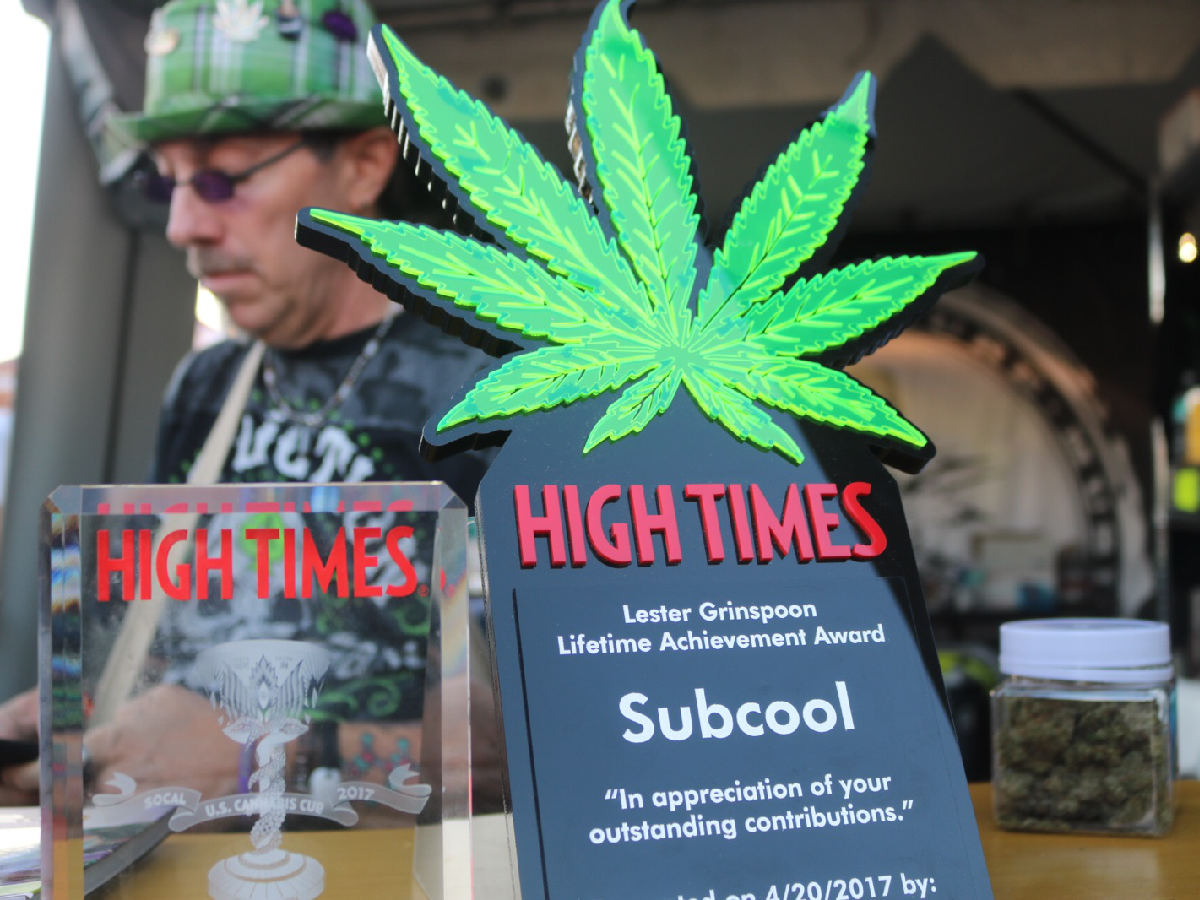 Subcool received the award in person on April 23rd at the 2017 Southern California High Times Cannabis Cup, joining the ranks of past winners such as Tommy Chong and Jorge Cervantes as one of a handful of recipients of the ultimate honor High Times gives members of the marijuana community.

He’s the only cannabis seed breeder and strain creator to ever win the award.

He started out penniless as a drug war victim who’d been imprisoned for marijuana.

Subcool loved growing marijuana and medicating with it, but noticed that most marijuana seeds and clones didn’t have good enough germination rates or the killer genetics and phenos he really wanted.

Networking with other professional growers and marijuana seed breeders, Subcool and associates such as Jinxproof and Heroes of the Farm gathered rare marijuana seeds and clones for a massive breeding program.

Of course Subcool and his allied breeders wanted to create new strains with the heaviest, most resinous buds ever.

But he also desired to go beyond the usual look, taste, and scents of standard Kush, Indica, and Sativa marijuana.

He and his associates worked hard to bring out rare cannabis tastes and scents including pine, berries, mango, lime, orange, lemon, and cherries.

Pretty soon, he’d created Jack the Ripper, Jack’s Cleaner, Agent Orange, Chernobyl, and other exclusive strains that have tastes, smells, and highs that hadn’t existed before.

His most recent marijuana seeds release is a Heroes of the Farm Gorilla Glue #4 upgrade called Cosmic Glue!

The TGA menu is known for having connoisseur strains from pure Indica or high-CBD to soaring Sativa– the majority of them high-yielding, easy-to-grow strains that grow well outdoors and indoors.

Today, TGA Genetics has the widest selection of truly unique, super-strong, and authentically true-breeding cannabis strains of anyone in North America.

Only the most longstanding Dutch seed banks such as Dutch Passion and Sensi Seeds have as many proprietary cannabis strains as Subcool Seeds TGA has.

Via the Internet, tens of thousands of marijuana lovers join in the life of Subcool, the world-class cannabis seed breeder and “weed nerd.”

He’s known for his charitable works– donating lots of money, marijuana seeds, and other benefits to veterans, economically-disadvantaged people, and disabled people.

“In his short life he has to live, Subcool is still focusing his remaining life on giving to others…sick people, kids with diseases that money will cure…you name it. He spends most of his time spooling up his fans to help with sick people. And his fans give money in truck loads to the causes.  He is the Keith Richards of cannabis with a huge dose of Mother Theresa.”

There’s even an entire CD of songs created by Emerald Triangle growers/rappers Mendo Dope, with each song based on a TGA Subcool Seeds strain!

“It’s a great honor to be recognized for my contributions to the marijuana community,” Subcool says of the High Times award. “I want to give special thanks to the Weed Nerd nation, to Jinxproof, and to High Times’ Danny Danko. What this is really all about is helping people grow their perfect buds and experience the healing power of cannabis.”