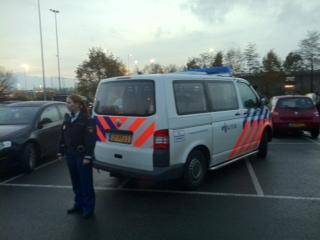 By Steve Davis | Published: November 23, 2011
The yearly marijuana-lovers’ pilgrimage to its Marijuana Mecca in Amsterdam this November was disrupted by more than a hundred police officers. For the first time in its 24-year history, the High Times Cannabis Cup in Amsterdam has been raided by police.

The High Times 2011 Cannabis Cup event is the most famous semi-public pot party in the world. Thousands of marijuana lovers trek to Amsterdam at Thanksgiving time to smoke massive amounts of Dutch marijuana, listen to bands like Cypress Hill, meet marijuana icons like Tommy Chong and Snoop Dogg, and judge marijuana to see if it is worthy of the vaunted Cannabis Cup awards.

But this year’s fun has been zapped: an army of Dutch police entered the High Times Cannabis Cup venue on Wednesday afternoon (November 23). Police delivered ominous warnings in several languages, locked the doors to the venue and did a “deep search” of everyone at the Cup; reports say participants were stripped of their marijuana and other “contraband,” and then freed.

Dutch hashish legend Mila, a female pioneer credited with making the Pollenator hash machines, was reportedly arrested because she was allegedly in possession of marijuana trimmings that she was going to use in a hashish-making demonstration. Other than Mila, there are no reports of other arrests.

“This is a straight-up robbery,” said 420Dave, a third year Cannabis Cup veteran. “They just held us hostage and stole all our weed, our seeds, our pipes. I lost at least $500 worth of stuff. I used to think the Dutch were so cool, now I see that they are Nazis. They are just as bad as back in the USA.”

Apparently, the police placed undercover and uniformed observers inside the Cannabis Cup venue. They had allegedly observed violations of Dutch law, including Cannabis Cup vendors providing cannabis to Cup participants. The free providing of cannabis is something that happens every year at the Cannabis Cup, so many people are wondering why it suddenly became “unacceptable” and raid-worthy this year.

This alleged distribution of marijuana prompted police to raid the Cannabis Cup and order it shut down. However, High Times carried on with an evening concert, as well as the final day of the event, and later posted a Cannabis Cup award list that you’ll see at the end of this article.

According to observers at the scene on Thursday (the day after the raid), a senior police official was again harassing the Cup, warning High Times management that the Cannabis Cup was allegedly still in violation of regulations, and was in danger of being shut down again. It was a miracle that the event continued at all, given the relentless pressure from Dutch police.

Some Cup participants said they were unable to find out exactly what was going on.

“The High Times people couldn’t get their stories together. One would tell you the raid was because the Dutch just don’t want Americans coming to the country for weed and they are sending a message. Another would say that it was because the people who organized the Cup didn’t get the right paperwork or something and that everything was just fine and the Cup would relocate to somewhere else in Amsterdam. I told them well when you’re searched and asked to show your identification documents, it isn’t fine, it isn’t what I came to Holland for,” said 420Dave.

“I was standing outside waiting for the High Times bus that takes you to the Cannabis Cup when the driver pulled up and said to us ‘Don’t get on, the Cannabis Cup has just been raided.’ If I had gone a little earlier, I would have been inside the Cup when the raid happened,” reports Big Buds Josh, editor of Big Buds, the world’s most cultivation-friendly online marijuana magazine.

The unprecedented raid on the 2011 High Times Cannabis Cup comes in the context of a darkening cloud of prohibition that is hanging over Holland.

Ever since the country’s political scene turned hard right after the 9-11 terrorist attacks in the United States, the Dutch people have elected ultra-conservative, anti-marijuana politicians from the Christian Democrat Appeal (CDA) and other conservative political parties.

In the past two years, the Dutch federal government has publicly and repeatedly stated its desire to ban all foreigners from Dutch marijuana coffee shops as of 2012, to regulate marijuana so that marijuana shops cannot sell marijuana with more than 15% THC, to decrease the number of marijuana shops, and to eradicate the Dutch homegrown marijuana industry.

“This is a terrible time for the Netherlands, this attack on the High Times Cannabis Cup,” said Hendrik, a Dutch cannabis seed breeder, marijuana grower and activist. “The cannabis coffeeshop industry, the growing industry, the hydroponics industry, and the Cannabis Cup itself all bring billions of Euros per year to our country. It is just insane that the police have done this raid. Why can’t they leave our culture alone? We are peaceful people.”

The Detroit police presence bummed out many of the Medical Cup’s thousands of participants, most of whom are legal medical marijuana patients in compliance with Michigan’s medical marijuana law, which is currently under serious threat due to Michigan’s marijuana-hating attorney general, Bill Schuette.

In Holland, High Times has been seen by some as an American organization trying to profit from Dutch cannabis policy.

“We have mixed feelings about the Cannabis Cup,” said a Dutch marijuana shop owner who never participated in the High Times event. “It is nice to see the Americans having fun over here and some seed breeders and cannabis sellers get more known. But the High Times party is known as a loud and wild event, and that attracts the wrong kind of attention. They moved the Cup to another location this year, and that might have contributed to the raid.”

Here is the list of this year’s High Times Cannabis Cup winners:

3. The Green Place for Buddha Tahoe

3. The Green Place for Twizla

When you see the list of winners, you’re seeing one of the most valued aspects of the High Times Cannabis Cup- the honoring of impressive strains of marijuana, and powerful marijuana concentrates. When a seed breeder wins a Cannabis Cup, sales and value of their strains go sky high!

Obviously, the raid of the High Times Cannabis Cup is a sad, cruel day for the marijuana community worldwide. And the gradual erosion of Dutch marijuana freedom is likely to cost the country billions of dollars in lost canna-tourism revenue. We all wonder why peaceful people and plants are under threat. Didn’t the Dutch police have anything more useful to do than persecute a bunch of marijuana lovers?