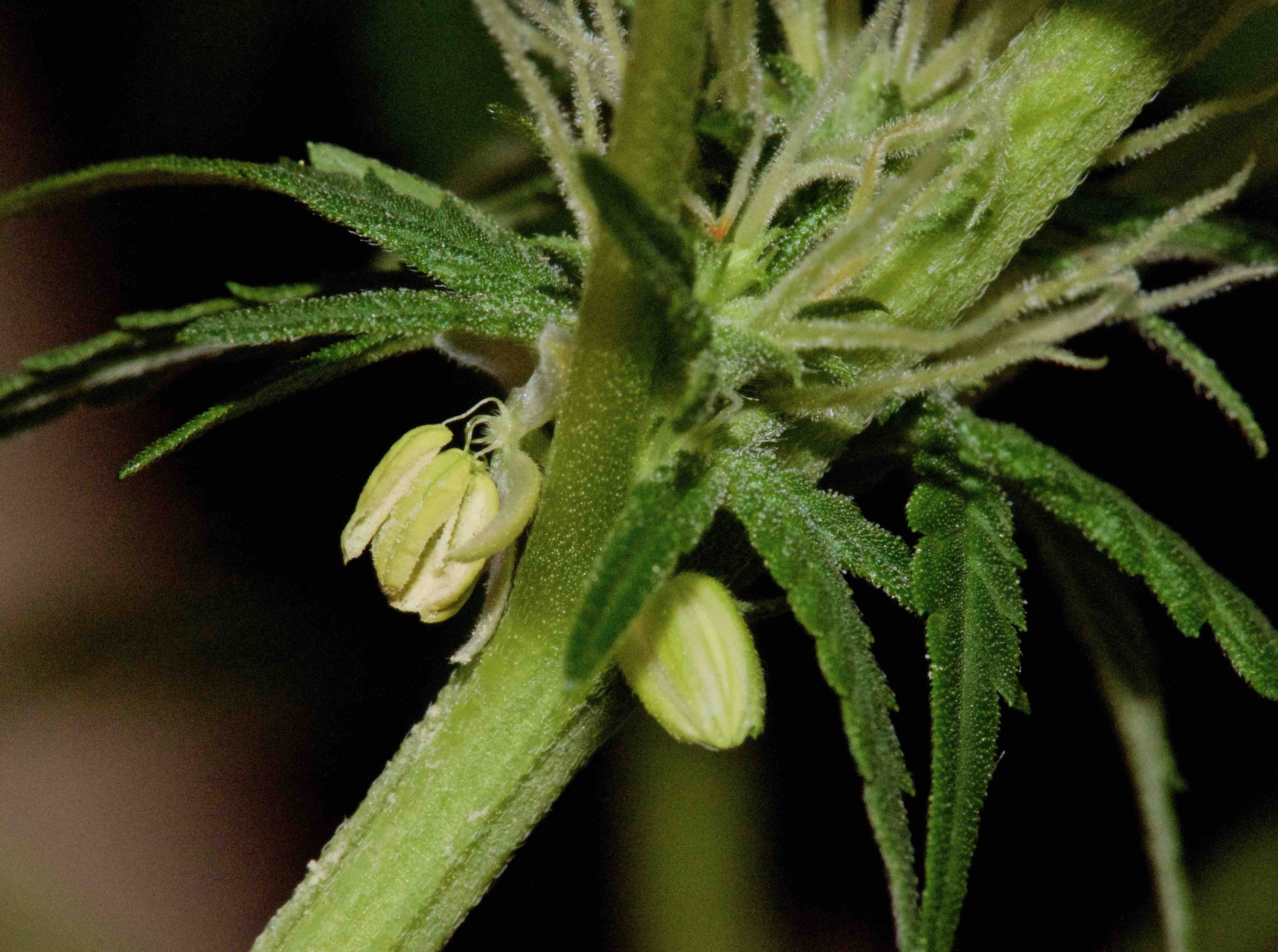 Yesterday I entered my bloom-phase grow room and was met with a dreaded sight. Dotted before me like rebellious agitators were several hermaphrodite flowers popping up on my cannabis plants, which had been grown from a feminized seed of the same strain.

A hermaphrodite flower is one that has both staminate (male) and pistillate (female) floral structures on the same plant.

The reason this is such a dreaded sight to see in a grow op is that male structures release pollen. Unpollinated female flowers — the entire goal of sensimilla cannabis production — will be contaminated by the pollen and become seeded buds.

Seeded buds are only desirable when you’re breeding seeds — otherwise, seeded buds are almost impossible to sell. And they’re filled with seeds, which makes it difficult to enjoy combusting or vaporizing them.

The formation of seeds takes energy and resources that the plant could use to produce bigger buds and more THC, other cannabinoids, plus terpenoids.

Many years ago, some growers looked at hermaphrodite marijuana, commonly referred to as “hermie,” as a benefit. Seeds produced by hermaphroditism tend to grow out to be female plants. They’re purebred marijuana seeds that can help a grower lock in desired genetic traits. But the bad thing about plants grown from cannabis seeds produced by hermaphroditic flowers is that those plants also tend to be hermies. The pollen problem occurs all over again.

So what causes them, and what can you do if you see them on your plants?

During two decades of growing and networking with other cannabis growers, I’ve seen hermies a couple dozen times out of hundreds of gardens I’ve either run or visited. Having examined the conditions of the grow op and the plants’ genetic origins, as well as keeping track of what I and other growers witnessed and correlated, outlined below is a summary of the causes of marijuana hermaphrodites. Note that one of these causes, or a combination of two or more, can be to blame.

Some cannabis strains tend to go hermaphroditic as a result of their natural genetic inheritance. Other strains that become hermaphrodite are victim of breeding errors that introduced hermie tendencies into the strain.

The majority of the strains I’ve seen go hermie are from feminized seeds. The process of creating seeds that don’t follow nature’s normal pathway to grow out as male or female can create hermaphroditism in some cases. I’ve also seen this with autoflowering marijuana, not just photoperiod varieties.

These plants have been waiting a long time for pollen and have not gotten any, so they decide to create male flowers themselves to make their own pollen. This is a great reason to pay close attention to harvest timing of your cannabis, so you don’t allow overripe buds on your plants. If you let your bloom-phase plants live too long, the buds may start to go hermie.

Cannabis plants crave an ideal set of environmental and nutritional conditions. If your grow op takes them out of their comfort zone during bloom phase, they might go hermie.

Plant stress comes in many forms. If your grow room is too hot or too cold, that will stress your crop. If your light cycles are unreliable in their start and stop times, or if there are light leaks or other light penetration interruptions during the night period, that’s also a stresser. If your plants are too close to lights or too far away, or if the lights are too intense, not intense enough, or are delivering a radiation spectrum not useful for cannabis, it can induce stress.

If you overfeed or underfeed, overwater or underwater, that too is stress for your crop. If you use inferior hydroponics nutrients, and/or if the nutrients solution or root zone is at the wrong pH, that hurts plants and may provoke a hermaphrodite marijuana situation. If your plants are rootbound, suffering from root rot, or your grow media isn’t aerated enough, that too causes stress.

Plant stress also occurs when growers use inferior bloom boosters that have the wrong amounts, types and ratios of phosphorus and potassium.

If you trim your plants too much, too often, or at the wrong time near or in bloom phase, these actions may trigger hermie marijuana. If your plants are attacked by pests and/or diseases, this too is a stressor that can trigger hermie flowers.

Hermies are much more likely to develop from seed-grown cannabis, but I’ve seen hermies from clones, even when the clone mother never displayed hermaphroditic tendencies.

Anything that means less than perfect conditions or actionable harm for your plants creates stress, and that stress can lead to hermaphroditism, especially if the plants already have a genetic propensity to go hermie.

Check out the below YouTube video from Just Grow It about the basics of hermie cannabis plants.

What To Do If You Have Hermaphrodite Marijuana Plants

What to do if you see hermie marijuana plants depends on your personal grow situation. There is no generic answer.

The last time I discovered hermie marijuana, I was in weeks three and four of bloom phase, with 27 plants divided into nine plants of each strain. Of nine plants of one strain grown from feminized seeds, five of them became hermies. One plant showed dreaded hermie flowers first; this alerted me to keep a watchful eye over the rest of the plants from that strain.

Watching for hermie plants is time-consuming. These flowers can develop within hours. They hide under leaf junctions and inside female-dominant buds. If you have large plants, especially outdoor marijuana plants that can grow as large as a small tree, it’s probably not practical or possible to scope out every floral cluster every day to see if you have hermie structures, especially if you’re growing at a remote site.

I immediately killed the first hermie I saw, and moved the other plants of that strain into a different place in the garden where air movement was far less likely to reach them. I don’t want air movement across potential pollen plants because it will spread the pollen to every plant in the grow room. Even a few hermaphrodite flowers can ruin your seedless buds, especially on the hermie plant itself and plants next to it.

After discovering and killing the first hermie, the next day I took each plant of that strain out of the grow room and examined every inch of them, from top to bottom. I discovered another confirmed hermie, so I killed it.

Three more went hermie, for a total of five. I killed them all. Did this seriously piss me off? Why yes, yes it did. I was averaging 2–4 ounces of dried bud per plant from that strain, so having to get rid of five of them seriously ate into my profits. I’d done all that work to get the plants healthy, trimmed, and properly set up for bloom phase. When they went hermie, that work was wasted.

Some growers might not have killed their hermie plants in that situation. In the past, I tried a tactic that included removing all the male structures from hermie plants and examining them every day to see if more develop. They always do.

But there are growers who might not have any non-hermie plants growing in the same room. If they kill all their hermies, they’ve lost everything and have to start over with a completely new crop. So they remove male structures as often as they see them, and prepare for a partially seeded crop. The way they see it, some bud is better than no bud, even if the bud is seeded.

However, if you see extremely minor hermaphroditism, such as fewer than five hermie structures on a plant during the entire bloom phase, that might not be a full-on plant-killing emergency. If you remove hermie structures and no new hermie clusters develop, you win.

What I want to emphasize is, unless I’m breeding for seeds, I don’t want male pollen anywhere around my female plants. That’s why if I’m growing marijuana from non-feminized seeds in a non-breeding grow op, I kill the males as soon as they show their sex. It’s also why I kill all hermie females. I don’t want to take the risk of having any pollen in my grow room.

I was able to complete that hermie-haunted grow op with 22 plants that yielded non-seeded buds. I breathed a sigh of relief when I saw that I’d caught the hermaphrodite marijuana floral structures in time, and removed that threat from my grow room so that no pollen reached my non-hermie plants.

I was angry about losing the yield from those five hermie plants, and contacted the seed breeder to advise that their feminized strain had hermie tendencies and had cost me some time, trouble and money.

Free of charge they sent me $300 worth of choice non-feminized strains via their third-party reseller. This was a reputable Dutch seed house that operates with honor and ethics.

However, when I had two different strains go hermie that were from a Cannabis Cup-winning North American seed breeder, they refused to comp me one iota. While I won’t name and shame them here, I will say they were nasty and dishonest about it.

The bottom line is, you want to use the best marijuana genetics you can find, treat your plants with respect, and pay them close attention, especially in bloom phase, to avoid hermaphrodite marijuana.

When your plants have early floral structures, examine them using a magnifying device, from top to bottom on a daily basis, even though it’s a hassle and costs you time.

If they look hermie free throughout peak bloom phase, you can back off the monitoring a little, perhaps being vigilant every other day. When late bloom comes, start daily monitoring again. By that time, if you see hermaphrodite structures, you don’t have to kill the plant, because you’re going to be harvesting in a few days anyway, and the pollen won’t have a chance to seed the buds.

Also, be sure to feed your plants the B-52 hydroponics supplement, which contains B vitamins to fight stress.

Hermaphrodite marijuana is something most serious growers experience at least once. Run your grow op as cleanly and perfectly as you can, use quality genetics, and monitor your floral structures closely. I hope you never encounter a hermie in your garden, but if you do, you now know how to handle it.

High Holidaze: 12 Days of Festive Cannabis Recipes. Day 12 — BC Sweet Tooth Kutia
From Going Green To Keeping Clean, These Are The New Year Resolutions Every Cannabis Grower Should Consider