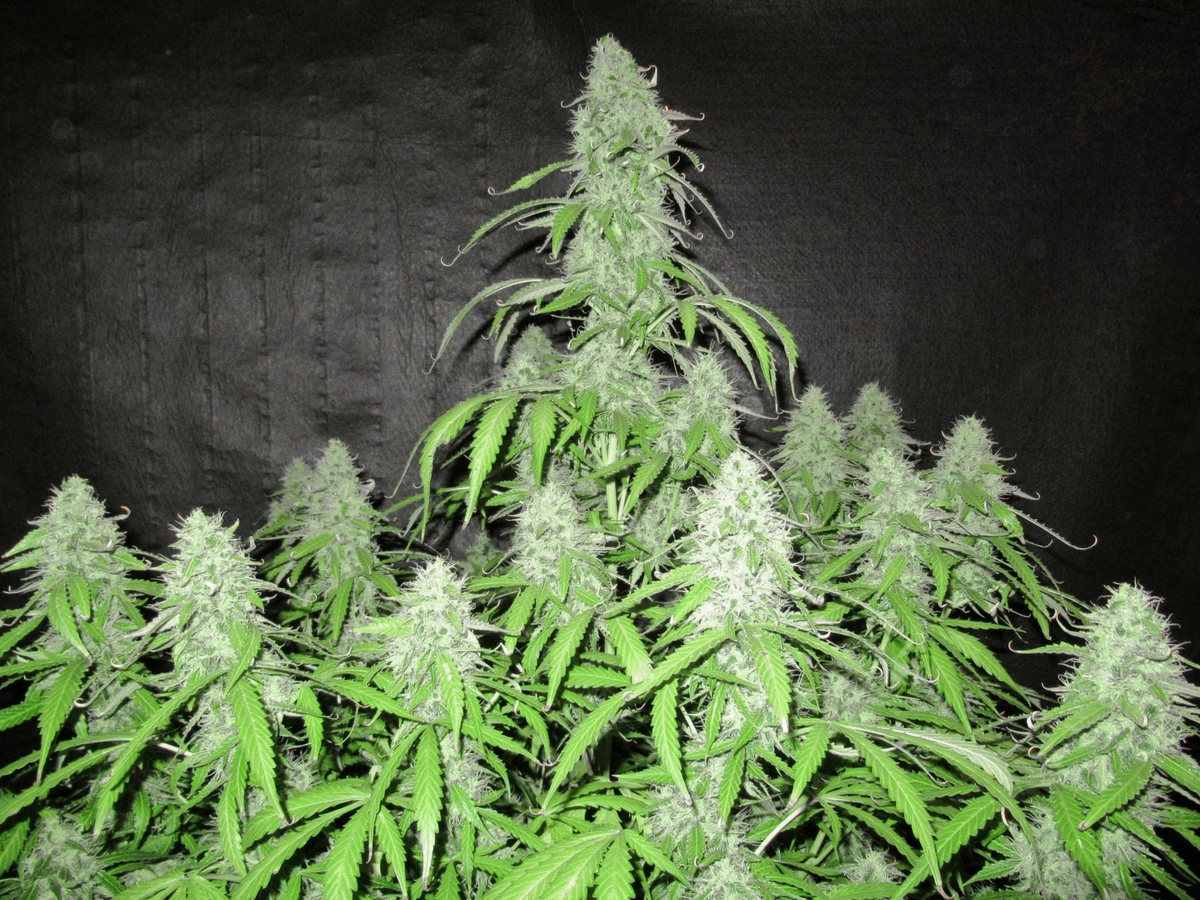 This untopped Power Plant shows you how big a yield you can get from a well-engineered sativa.
By Steve Davis | Published: December 6, 2017

In our continuing series on heritage marijuana strains every grower should try to cultivate at least once, we’ve shown you how to grow Northern Lights, Neville’s Haze, Afghani #1 and Skunk #1.

Today we’re looking at three more strains that were ubiquitous in grow rooms worldwide and in Dutch marijuana coffee shops during the 1980s and ’90s. We’re talking about Power Plant, Hash Plant and a Hash Plant variant.

I love newer hybrid strains like Blue Dream, Girl Scout Cookies, OG Kush, Gorilla Glue #4 and Strawberry Cough, but growers are missing out on older heritage or landrace strains you rarely hear of nowadays, yet are in some ways better than the modern strains.

Power Plant is one such strain to feel particularly nostalgic for. It was created solely by Dutch Passion in the 1990s from landrace South African sativa genetics.

It wasn’t bred and cross-bred endlessly to insert an overload of indica or Afghanica genetics. Instead, the Dutch Passion team worked with the original genetics for years, selecting sativa-dominant phenotypes that produce very large yields in a relatively short bloom phase.

I first experienced Power Plant in 1996 in Amsterdam. At that time it was the most powerful whole flower strain at the cannabis coffee shops, with a stimulating, color-enhancing high that increased the pleasure I got from visiting the Van Gogh Museum, tulip fields and the famed Dam Square.

Dutch Passion officially released Power Plant in 1997, and it was quickly adopted by growers worldwide because it fares well both indoors and out in a wide range of geographic locations.

It displays favorable characteristics not usually seen from sativa-rich strains, including relatively short and stocky plants; long, thick buds with a favorable calyx-to-leaf ratio; and a relatively short bloom time of 57–63 days (depending on phenotype). Plus, Power Plant gives you astounding, surprisingly large yields from a sativa strain.

Power Plant does well in screen of green, or SCROG gardens, greenhouses, and in regular grow-room configurations, and can handle heavy feeding, especially in peak to late bloom phase. Big Bud is an especially productive bloom booster for Power Plant in peak bloom.

But If You Want To Make Hashish Or Concentrates…

Way over at the other end of the spectrum from Power Plant is Hash Plant from Sensi Seeds.

This strain is 95 percent Afghanica, from landrace genetics sourced in the Hindu Kush mountain range that spans Pakistan and Afghanistan. Sensi explains that the landrace genetics were bred into a nascent Hash Plant format by American breeders working in the US Pacific Northwest. Then formational Hash Plant female clones were smuggled from America to Amsterdam, where Sensi Seeds breeding experts spent years crossing Hash Plant females with a variety of other strains.

This led Sensi to the realization that crossing Hash Plant with another nearly pure Afghanica in the form of its famous Northern Lights strain would give the seed company something truly special. Through backcrossing and selection, Sensi breeders created a seed strain with Afghanica-dominant genetics that were mostly Hash Plant, with some Northern Lights as a minority input.

The stabilized Hash Plant was immediately popular in Dutch cannabis coffee shops, but if you took too big a hit, you spent longer at the coffee shop than you might have intended, because the strain offered a knockout, sedating stone.

I always prefer stimulating sativa cannabis anyway, and the first time I tried Hash Plant I noticed several things. First of all, I’d bought three grams of whole flower to roll into joints, but the buds were so resinous that they gummed up the grinder and couldn’t be rolled into something that burned evenly. They were just too gooey.

Secondly, the smoke had a definite peppery effect on my tongue and mouth. It almost burned my tastebuds, that’s how spicy it was.

And when I finally got a hit of the joint that kept extinguishing, within five seconds my body had that weird pulsating sensation you get just before you faint. It made me feel so heavy and lazy that I keeled over on the coffee shop bench and passed out.

I woke up drooling and semi-comatose at closing time, when the psychotic coffee shop waitress burned me with a lit cigarette in a bid to get me to waken. I still felt leaden, heavy and washed out, and begged a cup of gut-rotting espresso. Even with the caffeine jolt, I still felt like someone had injected quicksand into my veins, and I struggled to make it back to my hostel.

When I woke up at noon the next day, I felt a Hash Plant hangover, similar to if I’d have taken Vicodin or OxyContin.

I was involved in grow consortiums that cultivated Hash Plant as a primary strain. It’s attractive for cash croppers who intend to make old-school bubble hash, sieve hash or dry sift because it produces extremely tight buds so loaded with trichomes that they can’t be easily manicured.

The preferred method of utilizing Hash Plant buds is to dry and cure them, deep freeze them, then run them as ice hash or sieved hash.

The strain has obvious medicinal benefits for people with chronic pain, spasms, insomnia, post-traumatic stress disorder, inflammation, arthritis and anxiety. Because almost all its intoxication is centered in your body, with little if any mental stimulation, I recommend combining it with a pure sativa when you’re using it recreationally and want to be alert and jovial.

It’s an easy-to-grow plant that loves high-dosage nutrient feed programs and has an amazingly short bloom phase of 40–47 days. Because of the very short bloom phase, use Bud Ignitor to provoke as many budding sites as possible, pour on the Big Bud and Nirvana in peak bloom, and use Overdrive in the final days before harvest.

Be sure to flush thoroughly with Flawless Finish. Hash Plant buds already have a problem burning, due to excessive resin glands, and if they’re poorly flushed, the stored fertilizer salts will make them difficult to combust and they won’t burn to a white ash.

While in Amsterdam, when I mentioned to a cannabis industry expert that I found Hash Plant to be too sedating, he suggested I try a strain called Night Queen.

Night Queen was a big hit in the early ’80s in the Netherlands. It was created by breeders associated with Dutch Passion seed company and was known as an anomaly among growers because its Afghanica leaves were so exceptionally wide and short, as was its stature.

Due to its short, stocky profile, this hardy plant is one that beginner growers can rely on. It’s especially popular in sea of green and SCROG gardens, where vertical space is limited.

As with all dense, sticky buds, avoid overwatering and high grow-room humidity when you’re running Afghanicas such as Night Queen and Hash Plant. Too much water in the plant leads to moist buds that rot from the inner stem because of botrytis.

Dutch Passion removed Night Queen from its menu of seeds for more than a decade because its predominantly body high was out of vogue at the time, with this strain boasting unusually high levels of THC and CBD. But as people grew tired of the confusing entourage of effects from modern hybrid cannabis, they requested that Dutch Passion bring back pure strains such as Night Queen.

The company recently continued production to satisfy the demands of growers who were requesting a pure Afghanica that finishes fast and has a high percentage of resin glands for hashish and concentrates processing.

The name Night Queen refers to the fact the strain is best used at night so you can pass out. It’s definitely a nighttime weed, with its aphrodisiac effects, but it doesn’t make me collapse the way Hash Plant does. The name also references the dark-green, almost purplish-black foliage characteristic of pure Afghanica strains and strains such as Black Domina. The foliage is dark, shiny and pretty.

Night Queen is tasty when you give it Bud Candy and Nirvana in peak bloom and late bloom, and it takes 55–60 days to finish.

As with most Afghanicas, your harvest timing is best determined by the clarity and color of resin glands. When 10–20 percent of glands have gone cloudy and/or amber, you best flush and harvest.

One tactic I use to make this strain and Hash Plant not so crippling is to use them in a vaporizer set to 360°F. At that temperature, not much CBD or cannabinol volatilize, which gives you a sharper, more uplifting high. 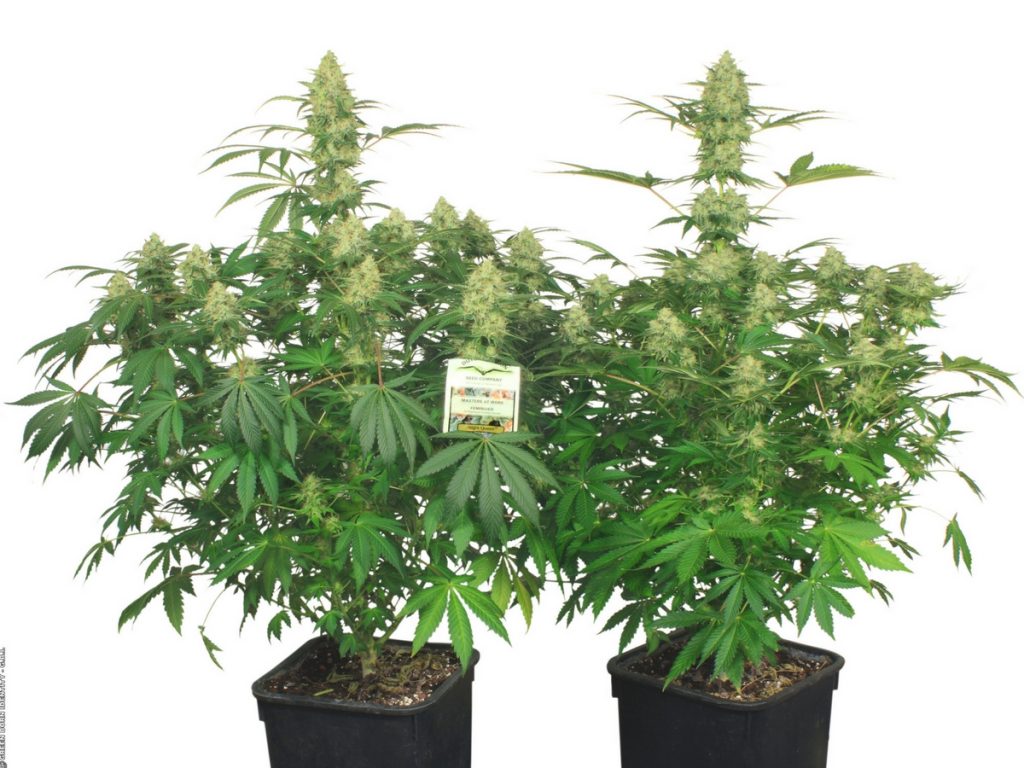 The name Night Queen refers to the fact that the strain is best used at night, so you can pass out. © Dutch Passion

In general, a primary usefulness of heritage strains such as Power Plant, Hash Plant and Night Queen is that you get a very predictable type of high and that you have a very simple hybrid that can be used for breeding.

Most modern hybrids contain ratios of cannabinoids and terpenoids from across the cannabis genetics spectrum and can deliver a disorienting, overwhelming body and mind high that isn’t so pleasurable.

For example, some modern hybrids give you the narcotic Afghanica body-slam effects of Hash Plant or Night Queen, combined with the thought-rush head effects of Power Plant or other sativas. You can’t get up off the couch, but you really want to, because your mind is stimulated. It’s a frustrating kind of intoxication.

Using old-school strains such as those described, you get a head high or a body high, but not both. Stoners often explain this as the difference between “day weed” and “night weed.”

One final note of encouragement is that as with Night Queen, the companies that created and maintain these heritage strains have to sell enough of them to keep them stable and active via mother plants and male plants.

If not enough people buy the likes of Hash Plant, Night Queen or Power Plant, eventually the seed companies will stop selling those strains altogether.

Your purchase, growing and breeding of legendary strains can be seen as a donation that ensures the genetic diversity and heritage of cannabis genetics for generations to come.

The Real News On Fake Weed: Even The DEA Wants You To Quit calling K2, Spice A Natural Alternative To Marijuana
What Does The US Army Have To Do To Ensure Continued Enlistment? Turn A Blind Eye To Marijuana, That’s What