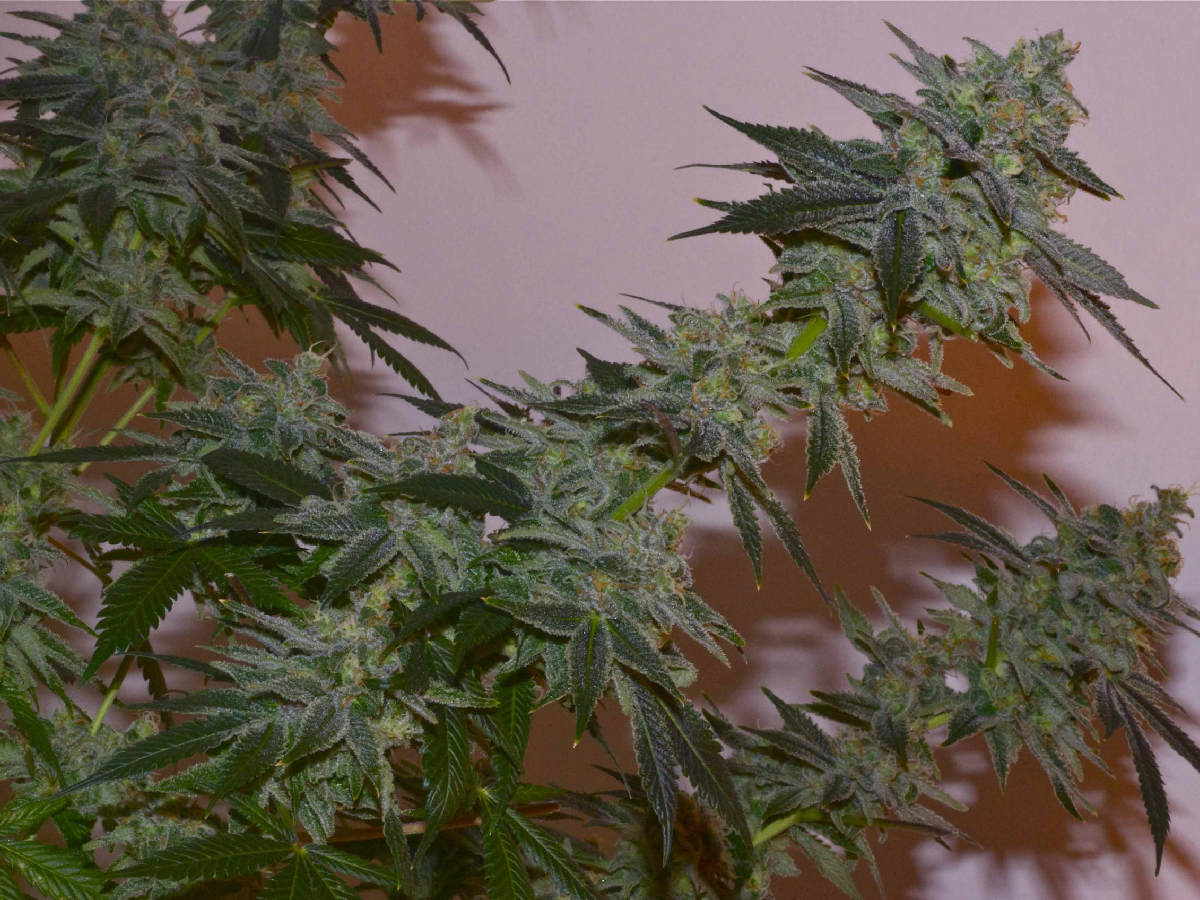 Before I started growing my own cannabis, I bought an ounce or two of mids every month, averaging $130 per oz.

They had no dank smell.

Gave me coughing fits, and hurt my throat.

This was the only kind of weed I’d ever smoked until I went to a party and a dude passed me a joint that tasted better and got me higher than I’d ever been before.

He said it was “Jack Herer” marijuana that he grew himself.

That Jack Herer cannabis made me instantly so very high.

As I exhaled the smoke, I loved how it tasted.

I decided to grow my own.

When the seeds arrived, I put them in little pots filled with soil I dug up from my back yard.

They grew outdoors and got to be about two feet tall.

I started seeing yellow leaves and the guy at the hydroponics store said I needed to add nutrients and move the plants indoors.

I bought a 400-watt light set-up, along with Fox Farm soil, 5-gallon pots, and Nectar for the Gods fertilizers.

I bought the book “Marijuana Horticulture” by Jorge Cervantes.

I learned what female cannabis flowers look like, when to harvest, and how to dry my buds.

The first time I smoked my own homegrown Jack Herer I was so proud, and the high was very, very kind.

I realized growing my own marijuana is the ticket to a whole new world of independence, sweeter highs, and healthier lungs.

When I went back to the hydroponics store for supplies, the guy said I can for sure grow way more buds using a hydroponics system and hydroponics nutrients.

I also got a 1000-watt light set-up, an exhaust fan, and some Mylar for my walls.

The more I grew, the more I enjoyed it and the better I got at it.

Growing hydroponics cannabis quickly became more than a hobby and turned into my main passion in life.

I had plant problems that seemed to be caused by the hydroponics nutrients I was using so I kept changing the brands.

I’d grown in soil using Nectar for the Gods, and in rockwool using General Hydroponics, Canna, Botanicare, and House and Garden.

None of the hydroponics nutrients bottles from any manufacturer said they were marijuana nutrients, cannabis nutrients, or marijuana fertilizer.

When I asked at the hydroponics store what’s the best marijuana nutrients, the store person said: “Well, the only company that makes marijuana nutrients is Advanced Nutrients but my boss won’t sell it because they are for marijuana and he’s worried it could bring heat on our shop.”

I ordered Advanced Nutrients from Amazon.

This line-up gave me faster growing plants and larger buds.

It was easy to see the benefits from using marijuana nutrients instead of generic hydroponics nutrients..

When I started using the Advanced Nutrients I saw they’re easier to use.

I was glad not be have to balance pH anymore.

My marijuana plants looked better than when I used other hydroponics nutrients or when I grew in soil.

My leaf color now is consistently a beautiful lime-green, my buds have a more potent scent, they’re stickier and bigger.

And the potency has increased, so I use less marijuana and get just as high if not higher.

I know that marijuana nutrients aren’t the only thing that factor in on whether I grow dank bud or not.

But it’s important, and I’m glad I found the ones that work.