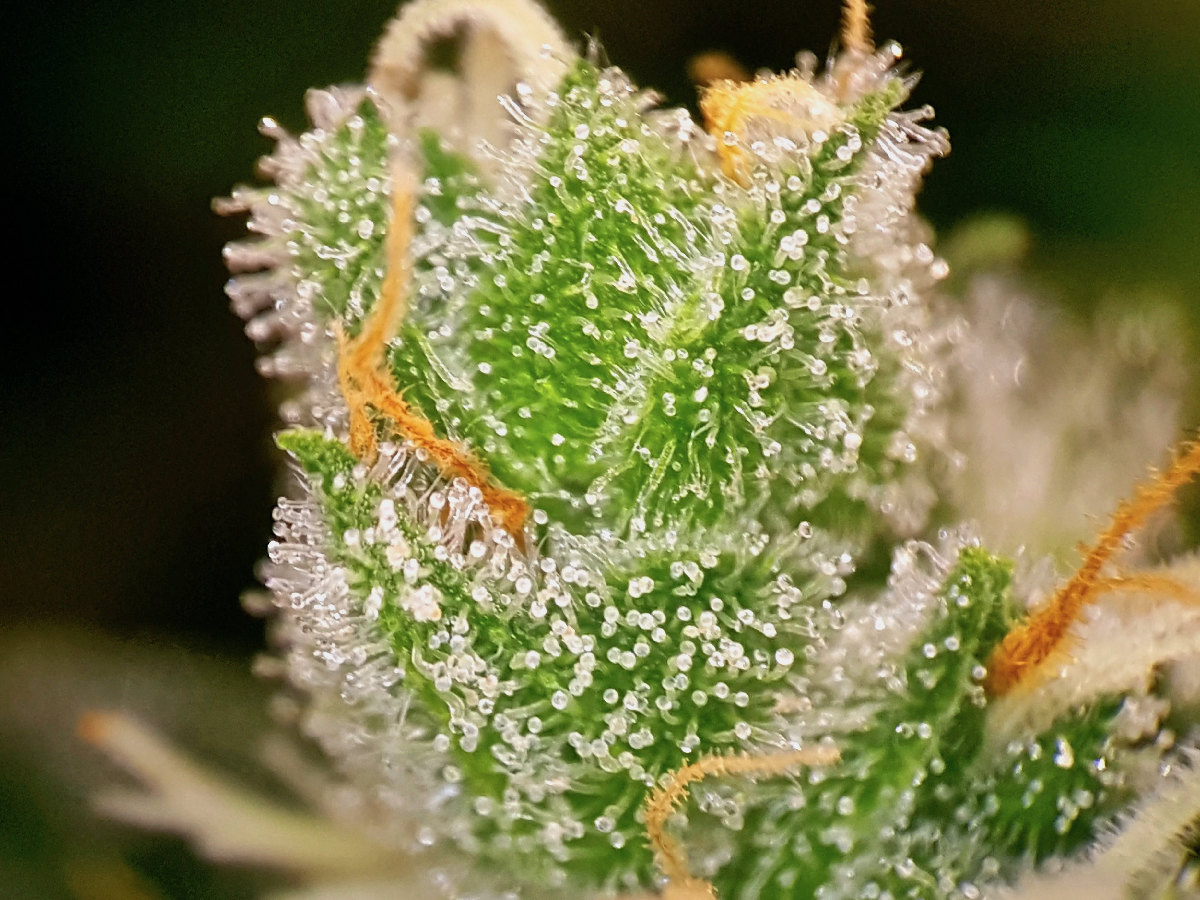 Consuming cannabis to beat depression and anxiety is one of the most common uses of the plant. As a marijuana grower who has lived with depression throughout my adult life, I’ve spent years growing, breeding, evaluating and cataloguing cannabis strains for use as my own personal antidepressant stash. These varieties are tested strains that live up to the phenotype descriptions provided by their breeders, and potent seeds are readily available.

In my experience, the cannabis strains listed below produce helpful psychoactive and medicinal effects, and in some cases, have been known to help people get off pharmaceutical antidepressants altogether.

Now, I’m happy to share with you these strains that have worked for me to lift that black cloud hanging over my head.

I’ve been unenthused and unimpressed by all Blue Dream strains I’ve grown and sampled — except, that is, for this Humboldt Seed Organization version.

With other versions of Blue Dream, the high was more blue than dream. So, I’m glad to say that Humboldt Seed Organization Blue Dream is well worth growing and using as a mood elevator.

The HSO version is a feminized simple cross between a heritage Blueberry and a heritage Haze. The Blueberry genetics provide enough indica influence to keep the strain from being too edgy, but most of the genetics are Haze sativa.

The plants should be given only three weeks in grow phase because they have above average stretch and can get too tall for an indoor grow room. You’ll need 65–72 days in bloom phase to get maximum resin production and weight.

The HSO Blue Dream high is dreamy and soft, but powerful. It chases away depression by putting you in a waking trance, and gives you delicious flavors and scents that range from blueberry to Lemon Haze.

Where to get: Humboldt Seed Organization sells Blue Dream feminized seeds, starting at €27.01 for a pack of three. 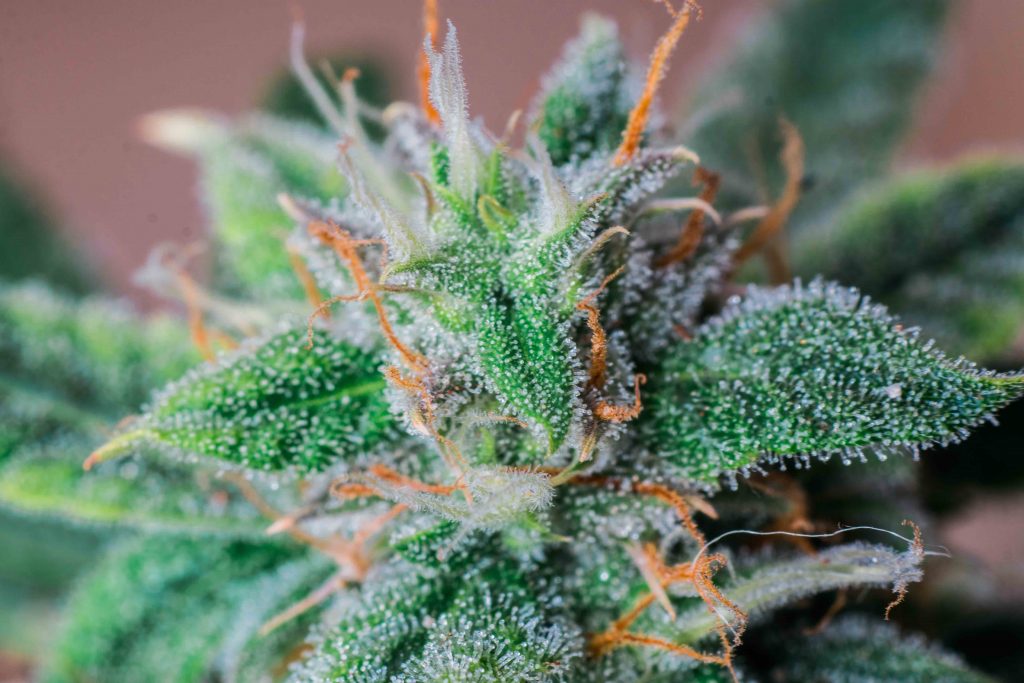 No one is really sure what came first, the strain or the eponymous 2008 movie starring Seth Rogen, Danny McBride and James Franco. However, what is known is that the stoner comedy Pineapple Express helped to put the strain of the same name on the map, with various seed companies trying to create a breed of cannabis that lived up to the movie’s hyped-up high.

Pineapple Express the movie portrays a wildly hallucinatory experience likely to induce manic hysteria. The only reliable Pineapple Express seeds I’ve ever grown came from G13 Labs and while the outcome was uniquely uplifting, admittedly it didn’t give me the insane high as shown in the movie.

G13 Pineapple Express combines Maui Wowie with Trainwreck to create several slightly different phenotypes that are easy to grow and yield big. Depending on phenotype expression, you’re likely to see a wide range of bloom-phase durations as short as 54 days, with some phenos needing as many as 64 days to flower.

This strain does indeed smell and taste like pineapples, but beware — some phenotypes put out so much scent that growing this strain can pose a security risk. Use Bud Candy bloom enhancer to push scent and taste to maximum pineapple.

No matter how depressed I feel, Pineapple Express always managers to put a smile on my face and enhance the beauty of my environment.

Where to get: G13 Labs sells feminized seeds of Pineapple Express, starting at £32.99. 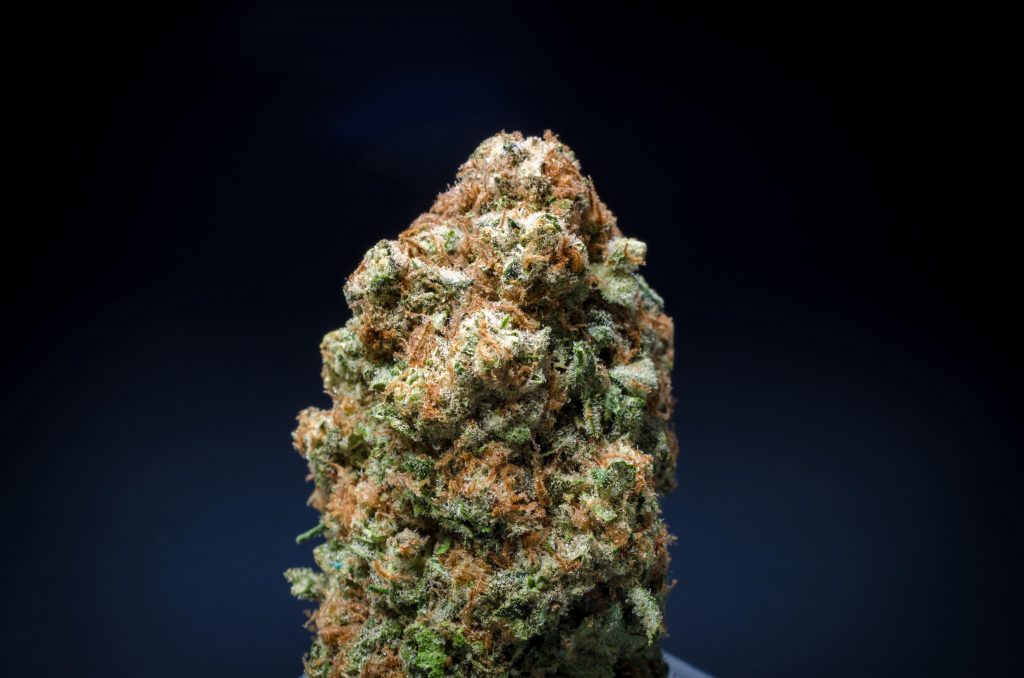 The strain Pineapple Express more than lives up to the eponymous movie’s hyped-up high.

Many of the best so-called antidepressant cannabis strains boast Haze genetics, and this one is no exception. S.A.G.E. stands for Sativa Afghani Genetic Equilibrium, which is an apt definition of the strain’s exclusive combination of original Haze and heritage Afghanica.

While the high doesn’t give you much Afghanica, it is a long-lasting Haze high but without the jitters that sativa strains can sometimes impart. Where the Afghanica does come through is in some of the growth characteristics. Its resins and skunky sage scent seem to repel plagues of spider mites, aphids and powdery mildew. Also, buds tend to swell up rapidly during the last third of bloom phase.

Only allow three weeks in grow phase to control plant height. Use the scheduled sub-bloom-phase feed program that starts with Bud Ignitor then goes in order to Big Bud, Nirvana and Overdrive. Your buds will expand and elongate during the final three weeks of the long bloom phase, producing yields way heavier than most Haze strains grown indoors.

Given its Colombian, Mexican and Thai Sativa genetics, S.A.G.E. enjoys a lot of light intensity and exacting light wavelengths. I’ve added side-angled LED grow lights to augment 1000-watt HID HPS grow lights in bloom phase to ensure plenty of radiation up and down the length of the bud branches, especially ultraviolet and infrared radiation.

S.A.G.E. does not respond well to overwatering and overfeeding. And the root zone should be flushed at the start of bloom phase and about four weeks into bloom phase. You might need staking and tying to support bud-bent branches starting at peak bloom and continuing until harvest. But who would complain about getting nine or more Haze ounces per plant from an indoor cannabis grow op?

Harvest timing is always important, but with strains that have the potential to elevate your mood such as S.A.G.E., it can make a big difference in the character of psychoactive effects.

The best way to time harvests is by monitoring the condition of resin glands while also factoring in the breeder’s bloom-phase estimate, but only as guidance. S.A.G.E. should be harvested at 64–67 days if you want a clean, crisp, euphoric, stimulating high. If you want more body effects, give your plants 68–74 days in bloom phase. If you want a much heavier high and a very large, resinous harvest, then give your plants 75–83 days in bloom phase. And remember, these harvest timing estimates may vary due to your specific grow-room conditions and cultivation techniques.

I first grew Kandy Kush when I received three freebie seeds along with an order from the Attitude Seedbank in the UK. I grew this strain with little expectation and was happily surprised by its ample resin production, harvest weight and antidepressant outcome.

Even though the strain is mostly Afghanica and is bred by crossing OG Kush with Trainwreck, it has a euphoric, uplifting high, much like a pure sativa.

It grows out to give you a shorter Afghanica or a taller sativa phenotype, but both resemble each other and the difference is most noticeable in bloom-phase duration, which is 61–66 days for the short pheno and 66–72 days for the sativa pheno.

Both phenos benefit from topping and scrogging, and beware of bloom-phase stretch, especially if you have typical orange-spectrum high pressure sodium grow lights. This strain has so many resin glands that it’s best to deep freeze the buds after drying and curing to make it into bubble hash or dry sift.

Where to get: DNA Genetics sells Reserva Privada Kandy Kush, starting at €35.00 for three feminized seeds.

Euforia is an appropriate name for this euphoric Dutch Passion photoperiod strain that can be grown indoors and outdoors. According to Dutch Passion, this strain is part of a Skunk breeding program that dates back 30 years, with Euforia phenotypes chosen due to its hardiness, ease of growing, heavy yields and uplifting high.

Skunk is a heritage cannabis category that was created by crossing Mexican and Colombian Gold sativa strains with a pure Afghanica and indica strain.

Some growers harvest the strain at 56–60 days into bloom phase, when resin glands are still crystal clear, to get a stimulating sativa high. Meantime, other growers want a heavier harvest plus psychoactive effects and a euphoric outcome that quells anxiety, so they choose to harvest after a 60–70-day bloom phase.

Euforia buds can be leafy, so to reduce overly abundant foliage, go easy on any supplement that has plenty of nitrogen, especially during bloom phase. And be sure to flush the root zone when you transition from grow to bloom phase to get rid of excess nitrogen left over from any grow-phase base nutrients you may have used.

Where to get: Dutch Passion Seed Company sells three seeds of feminized Euforia, starting at €27.

BubbleBerry is a famous cross between two legendary heritage strains, Bubblegum and Blueberry. As with Kandy Kush, which has mostly Afghanica and indica genetics, BubbleBerry is a surprisingly stimulating, uplifting strain, given that sativa genetics aren’t predominant in its breeding lineage. And yet, whenever I’ve grown and consumed authentic BubbleBerry, it’s given me buoyant relief from depression, physical pain and anxiety.

The strain is easy to grow and when I’ve seen grow ops where spider mites were plaguing other strains being cultivated in the same space, BubbleBerry alone seemed immune from attack.

I consider this a mid-yielding strain. Its buds are long, dense and measure about 2–3 inches in diameter, but they don’t get so fat so as to develop gray mold.

The high starts out bubbly and smiley for about an hour, and then the indica and Afghanica kicks in to put a relaxing cherry on top of the experience.

Some BubbleBerry phenotypes express an intense bubblegum odor that poses a security risk. Odor control in your grow room is recommended when you cultivate this strain. However, that strong aroma transfers to your taste buds when you vape or combust the buds.

This is a beloved heritage strain developed and first marketed more than 20 years ago by Tony, the founder of Sagarmatha Seeds. I recently grew a new release of these seeds from Sagarmatha, and was glad to see that it’s retained the characteristics and the elevating high that I’ve loved for years.

Unlike pharmaceutical antidepressants, which can take as much as eight weeks before you start to feel the positive effects, you’ll know right away if a specific cannabis strain works to alleviate your depression, sadness and general dehumanized feelings.

Where to get: Starting at €45, Sagarmatha Seeds sells BubbleBerry in a pack of five seeds.

Pharmacists Help With Everything, From Viagra To Vicodin. So Why Not Cannabis?
Beers And Buds: Will Brewers Get The Crossfade Right?