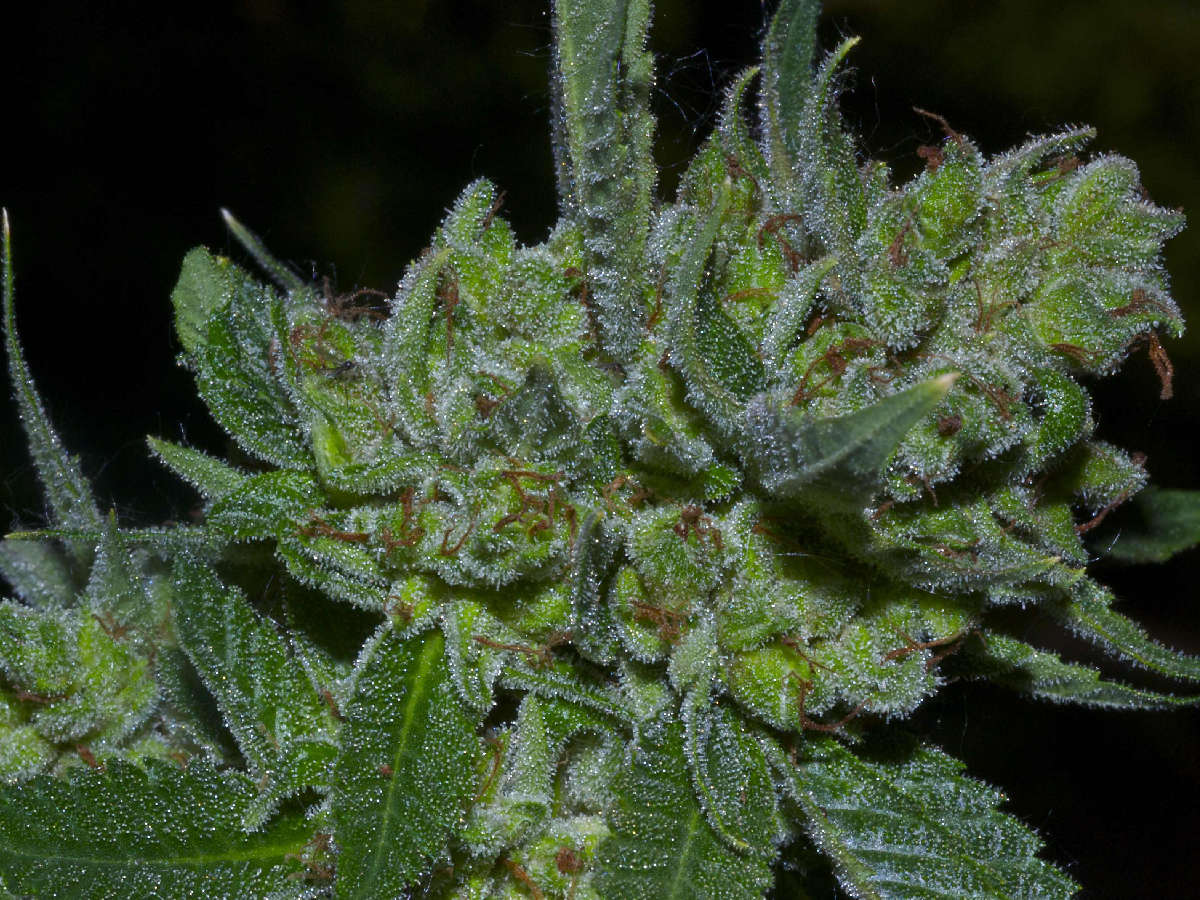 When you grow the strains people have heard of, it helps you sell more buds. © Copyright, Steve Davis, 2015
By Steve Davis | Published: August 3, 2015

When you look at the most popular marijuana strains in the retail cannabis market, you see the same strain names over and over.

Marijuana strains like Jack Herer, Chemdog, and various Kush cannabis strains are as famous as a Big Mac.

Everybody wants these buds. If you grow them, you’re almost sure to be able to sell them, as long as you grow, dry, and cure them correctly.

Let’s take a look at these guaranteed marijuana moneymakers…

Jack Herer: This classic strain often tops the list of the most popular marijuana strains.

Jack Herer marijuana originated in Holland and has been greatly improved by breeders in North America.

The original breeder (Sensi Seeds) lists it as a 50-50 Sativa-Indica cross, but in my experience, it has two distinct phenotypes.

One phenotype is Sativa-dominant and the other is Indica-dominant.

The Sativa-dominant pheno resembles a tall Haze and can take as long as 72 days in bloom.

The Indica-dominant pheno grows squat and short, with huge yield from a very resilient plant, after 53-60 days in bloom.

The Indica-dominant version can handle heavier feeding than its Sativa sister, and is resistant to molds, mildews, and pests.

If you see thin leaves, assume it’s the Sativa-dominant phenotype, and be sure to top the plant at 3-4 weeks into grow phase or else it’ll get way too tall for most indoor grow ops.

If you feed the Indica or Sativa phenotypes heavily in peak bloom and late bloom using Big Bud and Overdrive, you’ll see much larger yields.

The high from both phenotypes tends to be intense, combining mental stimulation with a weighty body high.

I’d recommend you purchase Jack Herer seeds or clones from North American sources, rather than from Sensi Seeds.

Not only are Jack Herer beans from Sensi Seeds very expensive, but as I said earlier, North American breeders have improved the strain.

Bubba Kush is another guaranteed moneymaker, even though I personally am tired of seeing this marijuana strain everywhere.

This is a pure Afghanica strain that grows fast in veg and has an 8-9 week flowering time.

As with most Kush cannabis strains, it grows short and can handle being topped and/or trained to create a large-diameter plant… as long as you give it adequate root size to support the Kush bush.

You don’t get large yields from Bubba Kush, but you do get very sticky buds.

The Bubba Kush high is almost totally a body high, and that’s why it’s popular with medical marijuana users who want relief from pain, spasms, and sleep disorders.

The average price per ounce of Bubba Kush is $300.

One version is a Southern California clone-only marijuana strain that has Haze influences.

The other is available from highly-respected Netherlands cannabis seed company Dutch Passion.

Both Strawberry Cough variants are Sativa-dominant, but not so Sativa that they grow taller than your grow room can handle, especially if you top the plants early.

Note that this marijuana strain has variable ripening times depending on the genetics of your seeds or clones.

I’ve seen Strawberry Cough ready at 56 flowering days, and I’ve also seen it need  60-71 days to be ready for harvest.

This cannabis strain can’t handle constant heavy fertilizing, but has a reputation for adding lots of weight in late bloom.

I add Overdrive bloom booster when I think the buds are within 2-3 weeks of harvest, along with extra Bud Candy, and the buds add about 7-15% in weight and size before it’s time to harvest.

Strawberry Cough buds are narrow-diameter and long like Sativa strains tend to produce, but more resinous and denser than Sativa buds from other strains.

An authentic Strawberry Cough marijuana strain smells and tastes like strawberries, and will give you a pleasant mid-level, stimulating, manageable, Sativa high that’s neither paranoid nor couchlock.

Average price of Strawberry Cough is $300 per ounce, and yes… it does make you cough.

Girl Scout Cookies has been one of the top ten most popular marijuana strains for the past three years.

I know of no reliable way to get authentic seeds, unless you have authentic Girl Scout Cookies buds and find seeds in hermaphroditic buds.

Not only that, but getting real Girl Scout Cookies clones is difficult unless you’re on the west coast or in Colorado.

It often has weak stalks and side branches, and goes taller than you’d expect given that GSC is said to be mostly Indica.

Some marijuana growers train it, stake it, or net it to add support.

I also suggest two other ways to make Girl Scout Cookies stronger. One is to feed with potassium silicate such as found in the Rhino Skin hydroponics product.

The other is to subject your marijuana plants to a lot of direct wind very early in their lives. Keep a strong fan breeze on them and it thickens their main stalk and side branches.

I found that GSC can handle more than the recommended dosage of base nutrients and bloom boosters during early and peak bloom but watch your leaf tips for burning so you know when to back off.

In soil, this marijuana strain tends to struggle and is a low-yielder, but in deep water culture, aeroponics, and other hydroponics systems you get more-reliable growth and larger yields.

I favor two derivatives of GSC: Cherry Pie, and Bay Platinum Cookies, because they’re easier to grow and are higher yielding.

Average price of Girl Scout Cookies cannabis is $340 per ounce.

Five years ago, Chemdog (or Chemdawg, as it’s sometimes called) was at the top of the list of most popular marijuana strains.

It’s faded a little since then, in part due to wild variability in the genetics grown and sold as Chemdog.

Allegedly an Indica-heavy strain created by crossing OG Kush and Sour Diesel, people have actually gotten into fistfights arguing over who created Chemdawg and who has reliable Chemdawg genetics.

This cannabis strain is relatively easy to grow, but has very strong and somewhat yucky odor, and takes 60-72 days in bloom time.

I recommend a longer than average flush time to purge some of the chemical taste from this strain.

Average price of Chemdog or Chemdawg is $290 per ounce.

Given that we just looked at Chemdog, which has a Sour Diesel heritage, it’s a good time to mention Sour Diesel as a perennial favorite in the contest for most popular marijuana strains.

If you’ve grown or smoked true Sour Diesel cannabis, you know why the words sour and diesel are used to describe it.

The sour and diesely smell is almost obnoxiously too strong, and that’s why this cannabis strain isn’t recommended if you have any worries about odor while growing, storing, or transporting marijuana.

You can put top-shelf Sour Diesel in a mason jar and put the Mason jar in two plastic bags… and you’ll still smell it!

Because Sour Diesel is mostly-Sativa, you only want it in veg for 3-4 weeks maximum, otherwise it can get too tall for most marijuana grow rooms.

Pour the light onto this one and give it quality hydroponics base nutrients such as pH Perfect nutrients to maximize growth rate and yield.

I’ve seen a couple of companies selling Sour Diesel seeds, but when those seeds grow out, they only smell like Diesel (without the sour), or they aren’t even remotely close to real Sour Diesel.

Of the two, I prefer East Coast Sour Diesel, because it’s sweeter.

Expect a powerhouse but stimulating Sativa high from Sour Diesel, which averages $310 an ounce retail in North America.

Pineapple Express isn’t in the top ten of the most popular marijuana strains, but it is in the top 20.

Of course, it’s fun to argue about whether Pineapple Express marijuana existed before the Seth Rogen and James Franco movie of the same name came out.

Pineapple Express has a wonderful smell and taste, although it doesn’t really remind me of pineapple so much as it reminds me of pine and mango.

Other growers tell me you can bring out the pineapple taste when you use Bud Candy carbohydrates throughout  bloom phase.

Pineapple Express marijuana has a fun, uplifting buzz, neither overwhelming nor boring, that tends to be like an old school Sativa.

You find G13 labs selling “Pineapple Express” seeds but when I contacted them for information about the genetics and growing characteristics of this marijuana strain, their reply was so weak that I no longer believe G13 has authentic Pineapple Express.

This is an alleged Sativa strain that grows like an Indica. The genetics that make Pineapple Express are said to be Trainwreck crossed with a rare Hawaiian Sativa.

It’s hard to get your nutrients parts per million right with this plant. Too much or too little seems to be the norm. It’s a hard strain to please.

I also experienced during two different grows that this marijuana strain was in peak bloom with intact resin glands, and then a couple of days later the resin heads were falling off and the buds were more than ready for harvest.

Average retail price of Pineapple Express marijuana is $290 per ounce.

This isn’t a complete list of the most popular marijuana strains.

I left out Blue Dream, Super Silver Haze, Grand Daddy Purps, White Widow, OG Kush and other widely-known marijuana strains, mainly because those strains have been done to death.

They’ve been around so long that they’re kind of boring and in many people’s view, they’re overrated and overpriced marijuana strains.

In some cases, as with Jack Herer or true Sour Diesel, the smoke is superb.

I prefer to grow clone-only or boutique marijuana seeds that nobody has ever heard of.

However, the most popular marijuana strains are famous and branded, which means they sell fast and easily.

If you grow and cure the most popular marijuana strains properly, they won’t be sitting around long. You’ll convert green into cash, in a flash!