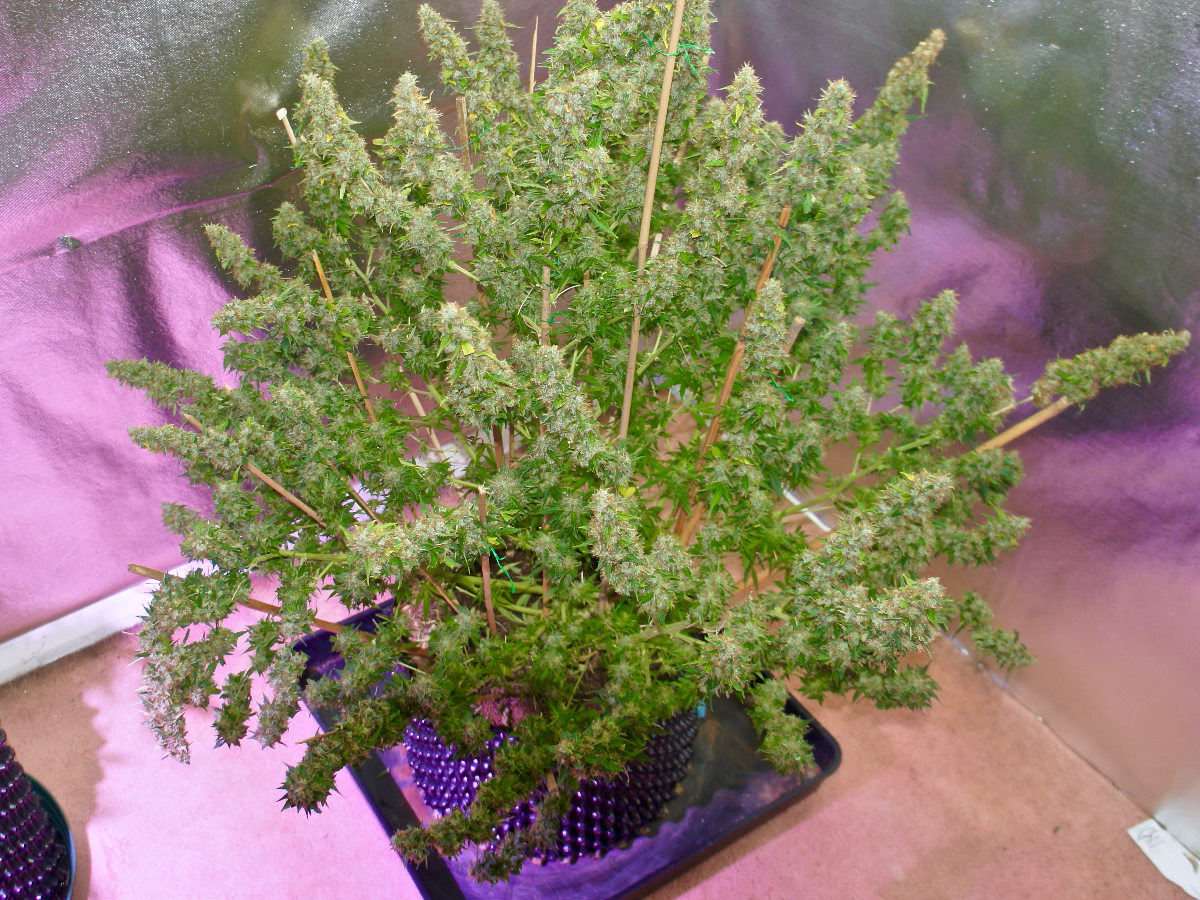 This Auto Mazar strain from Dutch Passion illustrates how productive the new generation of autoflowering cannabis can be.
By John Foster | Published: February 19, 2019

Autoflowering plants are strange but wonderful creatures. When automatically flowering cannabis first showed up on the scene two decades ago, it was hempy, leafy and low potency. But throughout the last 10 years, breeders of autoflowering strains have upped their game, creating cannabis variants as high yielding and as robust as the precursor photoperiod strains they derive from.

Growing autoflowering cannabis is vastly different to growing regular photoperiod strains. Here are the basics you’ll need to know before embarking on such a grow:

Over a period of about five years, I’ve grown a total 21 autoflowering strains from five different breeders (and in some cases, I also grew their genetic photoperiod precursors) in indoor and outdoor gardens. I’m fortunate to have a close working relationship with the pioneering autoflowering research team at Dutch Passion, the seed company that helped bring autoflowering cannabis to the mainstream marketplace two decades ago. After much experimentation and debate with autoflowering experts, I feel I’ve finally gained mastery of autoflower cultivation, so now I’m sharing that knowledge with you.

For some growers, it’s more difficult to make useful mother plants, clones or seeds from autoflower plants than it is from photoperiod cannabis. Breeding is further deterred by the fact that all autoflowering plants grown from reliable commercial seed stock will grow out female. I’ve never had a male autoflowering plant, although I’ve had several hermaphrodites.

If attempting to clone an autoflowering plant, you’ll likely find the cutting won’t revert back to veg phase as would a clone from a photoperiod cutting. A cutting from a 35-day-old autoflower plant is supposed to be ready 80 days after germination, meaning the cutting will only have another 45 days left of life. The clone will continue flowering, but its stature, potency and yield will be lacking.

The offspring of amateur autoflowering breeding experiments are not true autoflowering plants, although they may carry the recessive gene for the autoflowering trait. You’ll need to be a skilled professional and do at least half a dozen generations of breeding to have even a hope of creating reliably autoflowering strains.

The bottom line? Unless you love breeding cannabis and have the time, expertise and grow-op infrastructure to do it right, it’s a lot easier to buy autoflower seeds.

When cultivating photoperiod cannabis, cut off the main stalk apical meristem and topmost leaf sets of side branches to limit plant height, create denser morphology, increase light penetration throughout the canopy, and increase number of colas the plant puts out. You can also top some strains of autoflowering cannabis to achieve shorter, bushier, higher-yielding plants.

Topping is especially useful for plants growing in enclosures with limited vertical space, but slows down flowering onset and bud maturation by week two. Also, some autoflowering strains don’t react well to topping and can develop hermaphrodite flowers or buds that never mature.

Often, autoflowering strains grow out to have one main cola that towers a few inches above the substantial colas below it. Plants with this natural, untopped morphology can produce heavy yields. Autoflower plants rarely grow more than three or four feet high, and the towering main cola won’t be too close to the grow lights in most grow ops. So, except in cases where I’ve had autoflowering phenotypes that are racing skyward and I fear they’ll get too tall, there’s rarely any need for topping autoflowering plants.

Autoflowering growers can get larger yields and shorter plants with low stress training, a cultivation style that involves gently bending, restraining and guiding side branches so that plants spread out horizontally rather than vertically.

Many autoflowering strains offer too much phenotypic diversity, including differences in height, leaf size and shape, flowering onset time, scent and yield. One plant I grew finished at four feet high, while another of the same strain finished at two feet high. Only the best autoflowering breeders make strains with reliable phenotype consistency.

“The consistency of phenotypic expression depends on the number of breeding generations used by the breeder, along with the stability of the genetics. Only the breeders who operate with the highest standards and are willing to spend years creating an autoflowering strain produce a strain line with tight control over the range of appearance, height, cannabinoids and terpenoids.”

However, breeders don’t have complete control over phenotype development. Plants interact with their environment, altering gene expression and phenotypic traits. And as with photoperiod plants, Mother Nature often introduces random genetic changes that can slightly decrease the consistency of otherwise perfected autoflowering strains.

Part of the problem for many autoflower strains lies in the complexity of the autoflower breeding process. Will the seeds have been bred over many generations, or will they be released after the briefest of breeding cycles? Has the seed provider been around for some time, or is it a newcomer? You want to know the answers to these questions before you commit to buying those seeds.

For many breeders, autoflowering seeds are a popular choice because growers love the speed and convenience of growing from autos. Some seed companies are trying to get a slice of the autoflowering profit pie, but they simply don’t have the skill required to produce quality seeds.

In many ways, creating stable, high-quality autoflower varieties is the toughest test of a breeder’s skill, technique and understanding. It’s also a test of their integrity. Selling autoflower seeds is one thing, but making sure the grower gets consistently great results from your strains is a lot more difficult to do.

Autoflowering cannabis finishes faster than comparable photoperiod strains, and is usually dominant in indica or Kush genetics, which are naturally inclined toward short seasons. Many autoflowering seed breeders claim their strains will be ready for harvest seven to eight weeks after germination, but in my experience with growing 21 autoflowering strains, the usual pattern of growth and seasonal duration is as follows:

“Some autoflowering breeders are too optimistic in their claims that an auto will really be ready in the times they state, especially with autoflowering strains with significant sativa inputs. The autoflowering industry is full of breeders who haven’t fully come to grips with the complexities of breeding. They don’t do enough testing to see how their seeds perform. They tell you their strain will be ready to harvest in eight weeks because that’s what you want to hear, not because it’s accurate.

“One of our strongest Dutch Passion sativa autoflowers is called Think Big. It includes very high-quality sativa genetics. Our strain description specifies 13 to 14 weeks from germination to harvest. Some growers are deterred by that length of time, but in the case of a pure sativa, the wait is worth it, and if it was a photoperiod sativa, it could be 13 to 14 weeks just in bloom phase.”

So, what advice about the best time to harvest does Janssen have for autoflowering growers?

“When resin glands are falling apart, the buds are ripe or overripe and it’s time to cut. I know growers who chop around 70 to 80 days no matter what, so they can get in more crop cycles per year. Many commercial croppers like to chop them at 73 days, which allows them five crop cycles a year. But many growers who are in less of a rush are happy to keep growing their plants until the resin glands are at their peak. That could be 120 days or longer from germination in some cases.

“Our research shows that autoflowering plants left alive longer than the breeder’s lifespan estimates often maintain fresh resin glands longer than photoperiod plants would, with more resins and bud structure developing. You can see chunky, rock-hard buds on our autoflowering plants that look like they were dipped in honey — that’s how much resin is on them.”

How does this work in terms of electricity consumption and cost of grow lights?

“Autoflowering cannabis folds most of its grow phase into bloom phase; both occur at the same time,” explains Janssen. “Photoperiod plants have only 12 hours of light per day to run photosynthesis and make cannabinoids and terpenoids. Autoflowers have more hours of light per day to create potency. Lab tests show that some autoflower strains are significantly more potent than photoperiod strains of the same basic category.”

Cultivators of outdoor cannabis may feel discouraged from growing autoflowering plants because their plants won’t see many hours of light per day, especially not direct sunlight. And yet I’ve successfully grown autoflowering strains outdoors. Even in peak summer, these strains received no more than eight hours of direct sun per day, and far fewer hours as summer waned. However, they still produced huge, potent buds, handled inclement weather, drought, pests and diseases with enviable resilience, were short in height (which is great for stealth), and yields ranged from adequate to spectacular.

Because you’re freed from having to provide 12 hours of uninterrupted darkness per day and removing male plants, autoflowering plants grown outdoors in guerrilla-style remote locations are a smart investment for ensuring potentially large, hassle-free harvests.

Having been breeding commercial cannabis seeds and selling them internationally since the 1980s, Dutch Passion’s founder is fortunate to have also worked with the Joint Doctor.

“Dutch Passion is the earliest major marketer of autoflower seeds,” Janssen says. “The autoflowering concept was created in the early 2000s, and we were glad to link up with the primary inventor of autoflowering cannabis, the Joint Doctor. The Joint Doctor started it all with a strain he called Mexican Rudy, short for ruderalis.” Janssen describes this strain as a dwarf that flowered earlier than any cannabis he’d ever seen. While not particularly potent or tasty, Mexican Rudy was a fast grower that was ready to harvest weeks before any other strain.

The Joint Doctor crossed Mexican Rudy with classic Northern Lights to produce photoperiod seeds that flowered and finished early. Joint Doctor also did ruderalis-infused backcrosses with the famous William’s Wonder strain. During these experiments, Joint Doctor created bizarre plants that stayed small and flowered early, no matter how much light they were provided with. Crossing male plants of this autoflowering experiment with the legendary photoperiod strain William’s Wonder resulted in the strain Willy’s Automatic, which became the foundation for the famed early autoflowering strain eventually known as Lowryder. Next, crossing Lowryder with a Brazilian sativa for several generations resulted in Lowryder 2, which was potent and heavy yielding. Then came Chronic Ryder, Diesel Ryder and Easy Ryder.

Let Freedom Grow: Cannabis Prisoners Have A Friend On The Outside
Big Bank Theory: Dems Hoping To Get Financial Institutions On Board With Cannabis