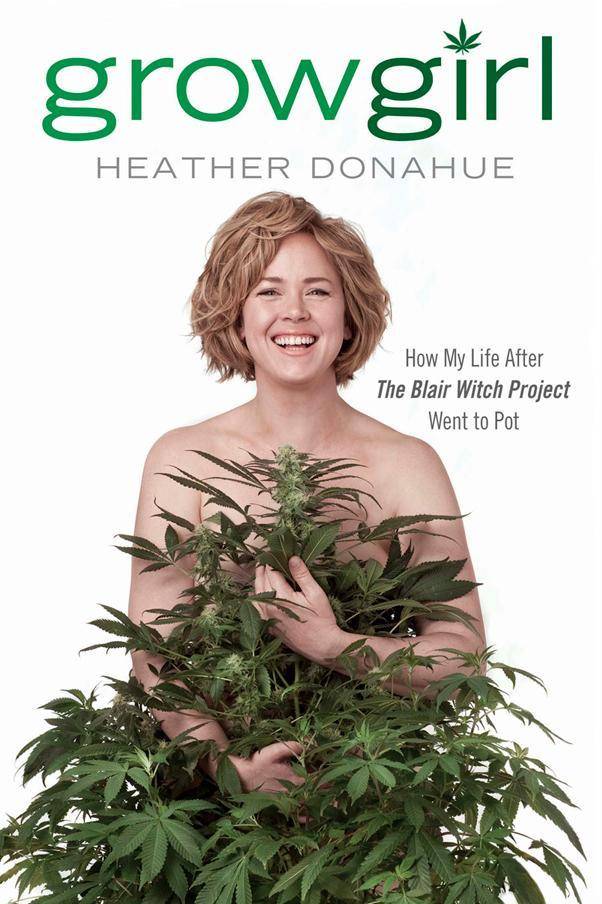 By Steve Davis | Published: January 6, 2012
What does the Blair Witch Project movie have to do with the increasing presence of women medical hydroponics marijuana growers in the marijuana cultivation industry?

In case you’ve forgotten or never heard of it, the Blair Witch Project was an “indie movie” showing an ill-fated videography crew going into the backwoods to investigate rumors about witches.

The female star of Blair Witch Project, Heather Donahue, did some impressive grimacing, screaming and panicking in the gritty movie. She was the babe in the stretchie hat, flailing her way through the woods, stalked by a twiggy little witch while trying to herd her all-male camera crew to safety.

The witch movie struck it rich and was a media sensation. But star Heather Donahue left the movie industry and became a marijuana grower.

You find out all about Heather’s transformation from indie star to sensi star in her book Growgirl: How My Life After the Blair Witch Project Went to Pot. Using humor, feminine spirituality and insight, Heather brings us to “Nuggetown,” where marijuana rules the economy and the social networks.

Growgirl ​isn’t a Heather version of an Ed Rosenthal or Jorge Cervantes cultivation book that you’ll read to find out how to grow big fat nugs, but it is a sweet and soulful read…kind of a Blair Weed Project, without the scary twig-witches…

Inspired by Heather’s growgirl revelations, it’s obvious we should find out more about the role of women in the marijuana cultivation industry, so let’s take a look…

Haley is a Southern California girl who loves surfing, cooking, and medical marijuana growing. She especially loves to get high and go surfing.

“Being out on the Pacific, rolling with the waves when you’re baked, that’s a medical use for me,” she quips.

Haley got into solo marijuana growing after learning the trade from her boyfriend and his grow buddies. When the boyfriend left her, she set up her own hydroponics grow room.

“If you can follow a recipe, you can grow marijuana,” Haley says. “It’s the same as in the kitchen: measurements, timing, paying attention, the right ingredients. If you do it right you get really high.”

Haley grows clone-only lines that she procures from professional growers. Most of them are Kush varieties, but she has also grown Jack Herer, which she says is a difficult strain to work with, but worth it.

She provides marijuana and medibles for “a few friends” from her 3000-watt ebb and flow set-up that generates about 2-3 pounds every four months.

“Men are more into taking risks than women,” she says when I ask if and why the marijuana industry is dominated by men. “It’s underground, kind of dangerous. Gotta be handy with tools, able to build things; there’s some heavy lifting and hiking if you’re an outdoor grower. Traditionally, that was male territory but it’s changing as women change.”

“My boyfriend and his pals were fanatical about growing,” Haley says. “They were as fierce as a mama bear. One thing women are better at is making edibles. Kitchen training makes for better meds. Most men suck at making medibles. I tell them to stay out of the kitchen and go back to the plants.”

“I Need Marijuana to Fight the Pain, So I Can’t Afford Not to Grow”

Kathy was a “wealthy socialite” living the 1% life in upscale Carmel Valley, California before her car was hit by a drunk red-light runner.

The collision put her in the hospital for surgery that left her with a lifetime of chronic pain. She tried pharmaceuticals and got no relief, but did get lots of negative side-effects.

When she tried medical marijuana, she did so clandestinely and with hesitation, but she got immediate relief and found that being high was pleasant and useful for her.

She started growing her own marijuana because it cost too much to buy it, and nobody wanted to give her a price break because they thought she was rich.

“I have money in land and art, but the accident cost me most of my liquid assets and I have to watch my finances,” she says. “I cannot afford to pay $400 an ounce. Besides, I have a green thumb. I was already into flower gardening and veggies.”

Relying on expert advice from a Santa Cruz medical marijuana cooperative, Kathy turned a spare room into a grow room. She uses a 4 x 4 self-contained grow chamber that she says “practically runs itself.” Her crops are mostly started from purchased, well-rooted clones and grow phase plants.

“In Santa Cruz women are empowered and they have lots of say in the medical marijuana community and they are fighting against the drug warriors. I admire their courage,” she says. “For me, having these healing plants that give me all the medicine I need, that’s a real blessing. I am so glad it is legal here because I need marijuana to fight the pain, so I can’t afford not to grow.”

“It’s Who You Are as a Person, Not the Dominance of Your Y or X Chromosome”

Leah is a full-time marijuana grower living near Ukiah, California. She has a medical marijuana license and is an approved caregiver for several patients, including some who are terminally ill.

She started off helping her husband and his two business partners with their annual outdoor marijuana crop. They did the fieldwork; she took care of manicuring and packaging buds.

Heather Donahue calls this being a “grow wife.”

“I wanted them to keep getting that outdoor crop as long as they could, but I didn’t want to be outdoors anymore,” she said.

So she bought a small fixer-upper home and converted it to a grow house that she mostly runs by herself, with the help of her sister-in-law.

“This was not a newbie situation,” she explains. “She and I knew exactly what to do. We gutted the house and built it back up to grow marijuana. The main things we had to rehab were the wiring, air conditioning, back-up power, pest control and security.”

Going for the most sophisticated and controlled production method, kind of as a contrast to the rugged, low-tech outdoor marijuana grows she was familiar with, Leah got an expandable deep water culture system, a diesel-powered electricity generator, and 8,000 watts of lights on movers. She created separate custom spaces for motherplants, clones, and seedlings.

Leah says she’s proud of the increasing role of women in marijuana political lobbying. Citing NORML and other national marijuana advocacy organizations that have official committees focusing on women’s marijuana issues, Leah says more and more women are seeing that marijuana is better for families than the war against it.

Women are also becoming more political, less deferential to power structures, and more willing to go public with their marijuana advocacy. Heather Donahue is a prime example of that kind of courage and canna-feminist media image.

“Women marijuana growers and users can look at women’s marijuana communities in such places as the International Cannagraphic women’s forum, which is on the Internet. It’s a valuable place for females to network about growing and the culture,” Leah says.

Leah reports that “being raised as the only girl among five brothers” helps her “understand guys,” so she’s “not offended” at the way women have been portrayed and treated in the hydroponics marijuana industry.

She sees a measure of “sexism and sleaze” in how women look in hydroponics advertisements and magazines, but it doesn’t make her dislike or diss the marijuana industry or male growers.

“I’m not offended when they use women in their ads or at the trade shows, but a lot of the girls look like strippers, which isn’t a good image for hydroponics,” she says.

“I don’t think men marijuana growers look down on women more than any other group of men do. I do think men are sexist by nature,” Leah says. “Men will look at a young, pretty girl, but not at me. That’s how nature works. When I was younger and firmer, they looked at me the same way. But for whatever crudeness men have, they’re useful for any woman grower especially if she’s working outdoor crops or doing weed-money deals: you want a bad-ass male associate with you when you’re dealing with some money in this business.”

Without resorting to “gender stereotypes,” it’s hard to say how or if the increasing percentage of women medical hydroponics marijuana growers affects the marijuana cultivation industry, Leah asserts.

“Some of my female friends say men are more of the mentality that the plants are green cash machines that you push as much as you can to get the most money, while women growers are more careful about the plants and keeping the home base safe,” Leah says. “I have seen women growers give marijuana away to people who can’t afford it, and haven’t seen any male growers do that.”

She reports that most marijuana growers she knows, male and female, are “more dedicated to their plants than anything else in their world.”

“It’s not a male or female thing. It’s personality differences of each of us. Some people are good at caring for plants. Others are not. Some are only in it for the money. Others see every plant as their baby. I don’t think your genitals determine whether you’re going to be a good marijuana grower.”

Thanks for considering the role and ideas of a few women who are involved in marijuana cultivation. We should also note the increasing role of women in hydroponics marijuana product development, such as Santa Barbara-based Gro Gro Gadgets and other female-founded companies. Feel free to share your thoughts and experiences regarding women in the marijuana industry. And now, an example of a marijuana + women video that some would say portrays women in a way that’s not  cool. On the other hand, lots of men and women may well love this video, if not just for the gargantuan, beautiful marijuana plants…