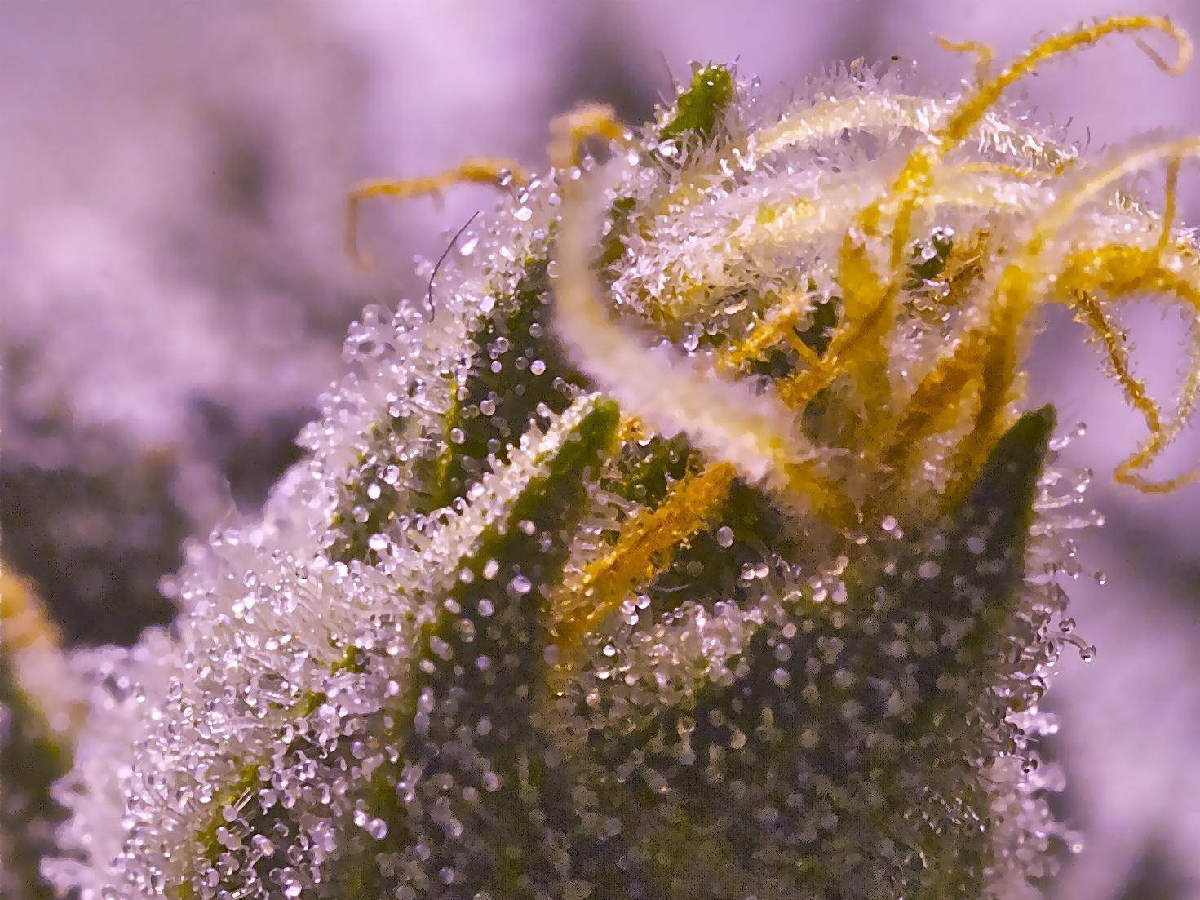 One small part of a Kush marijuana bud that has 2-3 more weeks in bloom shows you how much resin you get. © Copyright, Steve Davis, 2017
By Steve Davis | Published: January 14, 2014

Kush marijuana is one of the most popular types to use, grow, and sell.

Kush marijuana hits you with a reliably power-packed stone that leaves little room for pain, worry or aggravation.

As we’ve discussed before, marijuana experts, growers and users have diverse opinions on Kush marijuana origins and history.

Wise Kush marijuana historians make the case that Kush is not Cannabis Indica, but is actually its own branch of the cannabis family called Cannabis Afghanica.

Landrace Kush varieties are said to come from the Pakistan-Afghanistan inter-region, making Kush a distinct type of cannabis.

So when you see most people describing Kush as “Indica,” you wonder if that’s accurate, unless they mean the Kush genetics have been interbred with Indica genetics.

Whatever Kush is historically, you can almost always recognize a Kush plant when you see it.

This Kush strain has six phenotypes, all of which deliver heavy yields of gooey buds that have fruit overtones such as raspberry, mango, and passion fruit.

It has more Sativa than most Kush marijuana strains but still delivers large flowers in a short bloom phase (55-65 days), so be sure to provide support so your branches don’t break.

It tends to go purple, and is a hardy strain that grows well outdoors as well as indoors.

It was created by Heroes of the Farm, one of the professional breeding consortiums operating in the TGA Subcool empire.

Many moons ago, a Dutchman traveling in remote regions of Afghanistan gathered landrace seeds. Most of the genetics were for “hashplant” varieties, the kind of marijuana that survives the terribly harsh conditions of the Afghan high desert and mountain regions.

The result is a fast-finishing high-yielding Kush marijuana that’s great people who have pain, or insomnia.

Combine pure Kush genetics with the legendary S.A.G.E., and you get a Sativa-Afghanica mix that provides a full-spectrum high and an easy, productive growing experience.

This strain reminds me of the Kush 47 created by GrowDaddy, a cross between AK-47 and pure, old school, landrace Kush.

The plant has a Sativa-esque finishing time (10-11 weeks in bloom), but it also produces rock nugs and very high potency.

Because of the S.A.G.E. influence, Kushage doesn’t deliver the couchlock high people expect from Kush.

The heavy high is still there, but the Sativa genetics give you an up feeling that allows you to do more than sit down and chill.

Another reliable strain from the ever-expanding Subcool catalogue.

A very heavy yielder if you top and shape early and feed Big Bud, Bud Candy, Nirvana, Bud Factor X, and Overdrive at the appropriate times during bloom phase.

The guys at DNA have gained a lot of respect in the last ten years, winning High Times Cannabis Cup awards and providing consistent genetics.

As with all varieties of Kush and Kush-like marijuana, use of Big Bud and Overdrive in bloom phase will swell your buds.

Not known as a high-yielder, LA Confidential is nevertheless a connoisseur strain that commands top prices.

When people complain that many Kush marijuana varieties are clone-only, they can turn to DNA/Reserva Privada to get this true OG Kush.

The breeders got hold of old-school OG Kush strains and then worked them to bring out hints of Chem Dawg and pure Kush.

This High Times Cannabis Cup Indica Cup winner is harder to grow than most Kush varieties.

If spider mites have been a problem in your hydroponics room, don’t grow this strain.

Or if you don’t have your room set at ideal temperatures and you’re seeing too much heat, OG #18 won’t work well for you.

Top these plants around week three in veg to increase branching and increase yields.

The man who created Blueberry is responsible for this delicious Kush with hints of chocolate Thai.

DJ Short has taken Blueberry genetics and pushed them towards the Kush and Thai sectors, producing a dark-foliage 50-50 Sativa-Indica split that commands top prices because of its taste, smell and high.

When you grow this beauty, don’t trip out if some of the leaves look bizarre—it’s a trait built into this fine, connoisseur Kush-Thai strain.

Low-priced seeds from a heritage seed breeder that actually understands that Kush is Afghanica marijuna, in some cases with Indica mixed in.

Master Kush is very easy to grow, making it ideal for newbies or growers who don’t nave a lot of time to spend on their crop.

A heavy feeder with a short 50-60 day flowering time, this one loves Big Bud and Overdrive and produces larger than average yields.

Don’t expect this strain to stretch much, so if you have limited vertical space, you’ll love these little THC monsters!

I’m excited that you can grow these wonderful Kush marijuana strains.