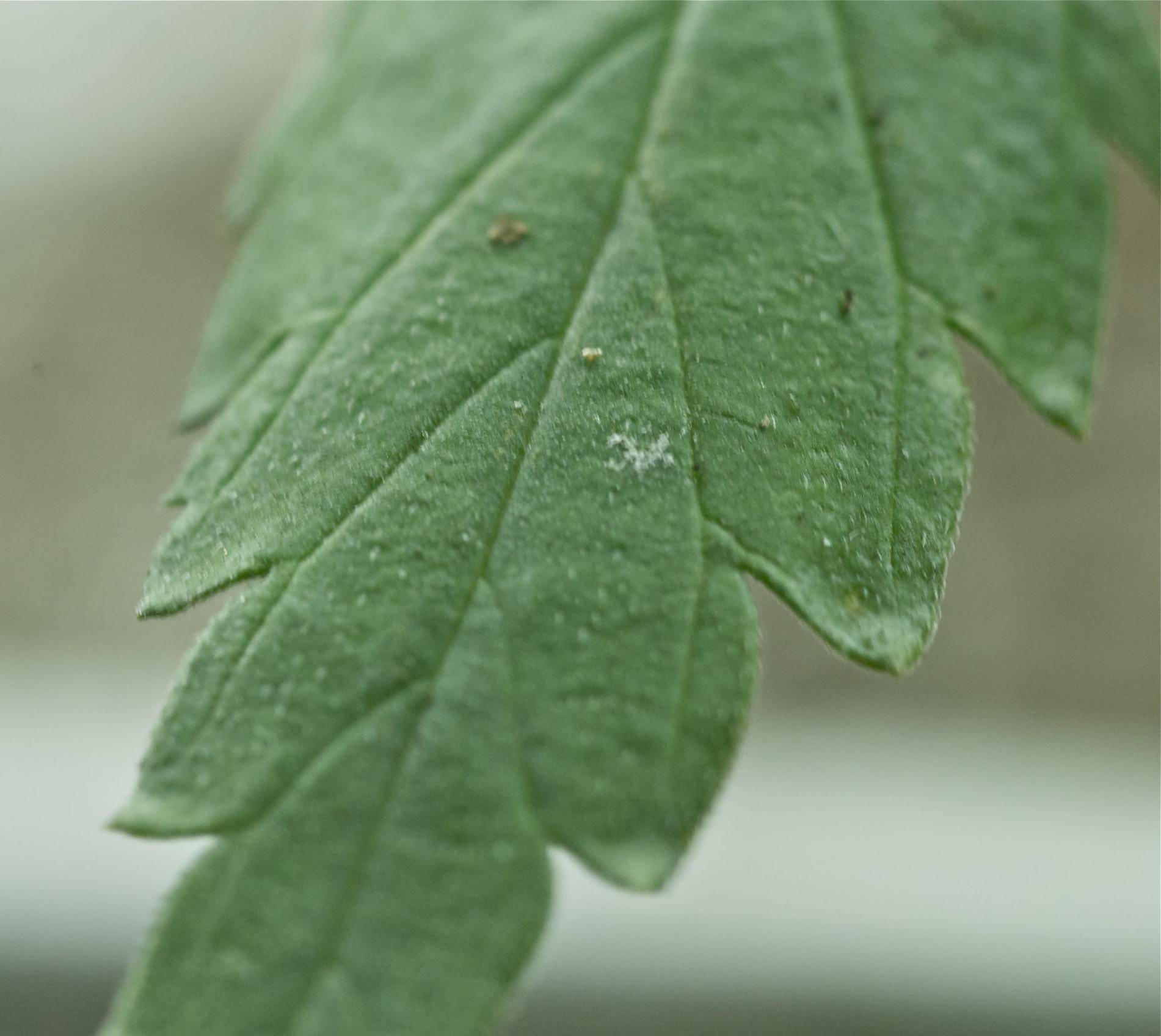 Those little white things on the leaf are the start of a powdery mildew infestation. (c) Copyright, Steve Davis, 2016
By Steve Davis | Published: November 26, 2012

One of the most challenging things for marijuana growers is what to do when pests or diseases attack your crop. And of those many attackers, powdery mildew is one that can drive you crazy because it keeps coming back after you think you beat it.

Powdery mildew is actually a fungi.

It travels via spores that attach to your plants’ leaves, stick a sucker tube into them, and suck the life right out of your plants.

Powdery mildew creates wounds on your marijuana leaves, weakens plant growth and yield, and can ruin a flowering crop if powdery mildew goes out of control in the last weeks of bloom phase.

Powdery mildew handle a variety of garden climate conditions but it really, really likes temperatures between 60-72F and humidity higher than 50%.

Give it the climate it likes, some poor air circulation, plants that are spaced too close together, and strains that are susceptible to powdery mildew, and you’ve got a tough battle on your hands.

It happened to me when I bought ChemDawg clones from a dispensary.

I looked at them with a magnifying glass before I bought them and didn’t see the powdery mildew spores.

In their early phase, the spores look like clear grains of sand.

Later on, they look like tiny weird mushrooms growing on your leaves.

When I got the clones back to my grow room, I was researching ChemDawg and saw the warning that they’re known to have low resistance to powdery mildew.

Three days later, I saw ¼ inch-diameter circular patches of white “sand” on a few of my ChemDawg leaves.

I whipped out the magnifier and sure enough, the evil mildew spores were camping out on my marijuana leaves.

There are several general ways to attack powdery mildew, and I considered which menu of tactics to use.

One way is to change environmental conditions.

So dial the temperature up past 75F, and dial the humidity down to below 48%.

One problem with that is, your marijuana plants don’t like temperatures above 74F, unless you’re giving them C02.

And low humidity can make your plants transpire more so you have to give them more water.

But that’s just the beginning of the list of weapons and tactics you can use to protect your hydroponics marijuana.

You can spray your plants with a vast array of liquid concoctions.

You don’t use all those ingredients at once, of course.

Check out gardening forums and marijuana grow books to see some of those recipes for creating foliar sprays that may get rid of powdery mildew on marijuana.

I chose to use a hydroponics-specific product called Organicide as a foliar spray.

It’s a three in one spray that kills insects, molds, and mildews.

Foliar spraying isn’t always a good option, especially when your marijuana plants are in bloom.

I sprayed the Organicide mixed with a potassium silicate formula called Rhino Skin.

Potassium silicate builds your plants’ cellular structure so it’s harder for powdery mildew and insects to bite into and suck from your leaves.

The sprays work, but they don’t totally eliminate powdery mildew from your grow environment.

One way I was sure the ChemDawg powdery mildew warnings are accurate is because I had three other strains in the same garden, in the exact same conditions, and none of them got powdery mildew.

This shows you the value of researching strains to get cultivation characteristics you want, and save yourself a lot of trouble. I had Big Buddha Cheese, Super Lemon Haze, and Headband in the same room with the powdery mildew ChemDawg, and they didn’t get infected.

If I’d done good research ahead of time, and as much as I craved growing ChemDawg, I might have avoided it if I’d known how much powdery mildew trouble I could have.

The only 100% tried and true method for getting rid of powdery mildew is a sulfur burner.

It is what the name implies: a heat-element device that burns sulfur.

Why burn sulfur? Because sulfur kills powdery mildew and only sulfur vapors can penetrate the entire grow area and all plant exteriors, giving you your best method to eliminate powdery mildew spores.

You burn the prescribed amount (depends on the size grow room) for an hour or two, leave the room unvented and closed for another hour or two while the sulfur is hazy heavy in there, and then open the room and get the fumes out.

It’ll stink up your house, but if you do it every 2-3 weeks in grow, and once before the second week of bloom, you’ll have done the best you can do keep powdery mildew coming on to ruin your buds during late bloom.

Because even if you spray your plants or use systemics, your grow environment still has powdery mildew spores that will somehow get back on to your marijuana plants.

A sulfur burner and sulfur should be part of the toolkit for any serious marijuana grower, especially if you’re making and transferring clones.

Be careful not to have the sulfur burner too close to a wall or ceiling– it’ll stain surfaces yellow.

You don’t want your clones to transfer powdery mildew to other grow rooms.

So you sulfur burner treat them before you send them out.

Other ideas include a wand that produces a high dose of UV-C light, which supposedly kills mildew spores.

And I guess that’s the “hopeful” message for those of us who look for the best information on how to grow marijuana: if you catch powdery mildew early and run through the toolkit of methods to stop it, and even if you don’t use a sulfur burner to get rid of it 100% in that crop cycle, you can get your infected crop to harvest and will not lose the entire harvest.

Maybe you have to wash your marijuana before you dry and cure it, but you can still get high off of it.

I suggest that after a powdery mildew infestation, if you’re willing to get rid of all your plants, thoroughly sterilize your grow equipment and room (most likely using a sulfur burner), then start over again growing your marijuana from seed.

If you import clones into your hydroponics marijuana grow room, you take a big risk of bringing in evil spores that create extra work for you and big problems for your marijuana plants.

And, the only guaranteed way to stop powdery mildew after it has started is a sulfur burner.