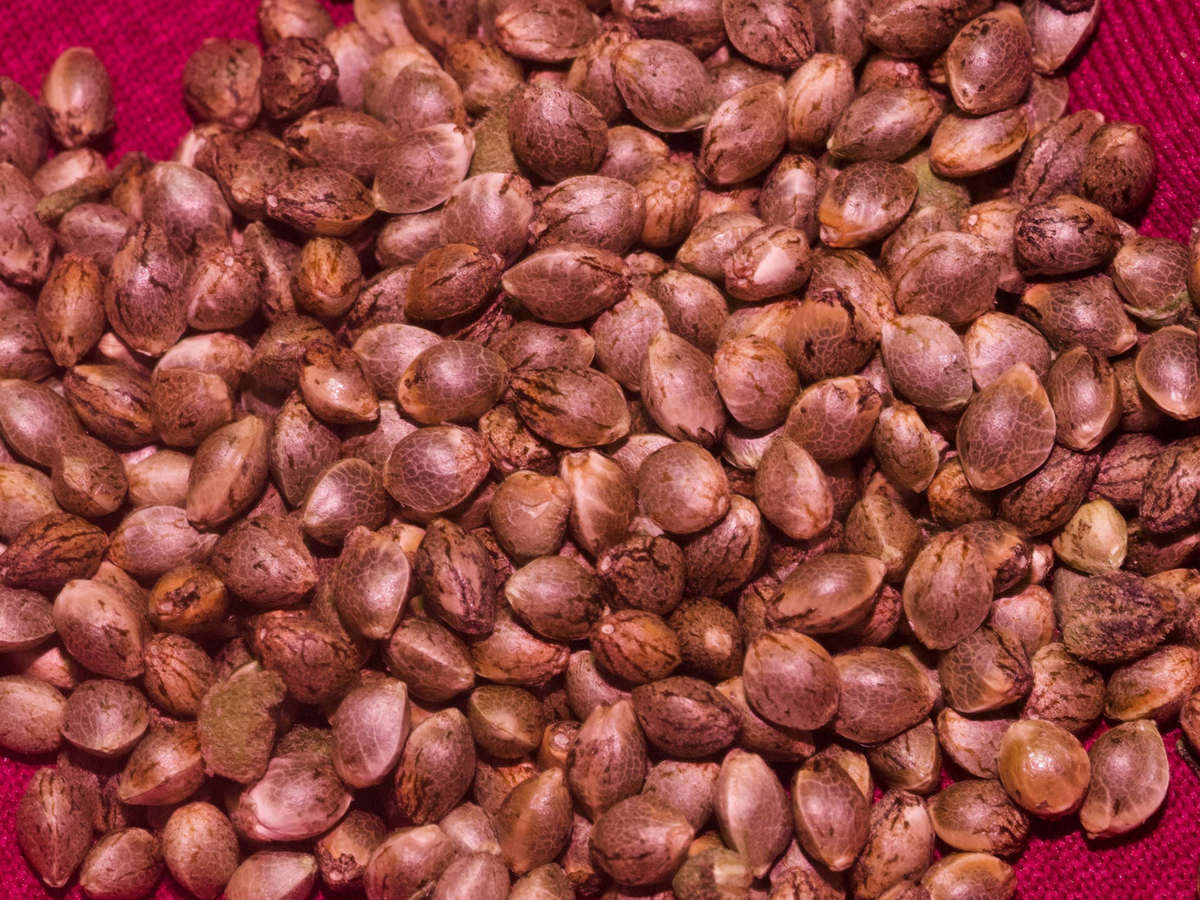 If you were waiting to buy seeds of the famous, scintillating heritage or landrace marijuana strains we’ve been featuring, now’s the time. I’ve been tracking seed prices of quality strains sold by reliable cannabis seed resellers, and I’ve found that in the past year, prices have gone up an average of 30 percent.

No matter if you get your marijuana seeds from seeded buds (sometimes called bag seed), from seed resellers, from friends, or from dispensaries, seeds from different strains can show substantial variation in size and minor variation in shape. What you should be concerned about are seeds that don’t look like the seeds in the main photo accompanying this article.

Properly bred, dark-colored and patterned marijuana seeds like the ones in the above photo are seeds that by far possess the highest germination rate and produce plants with the most vitality and performance. 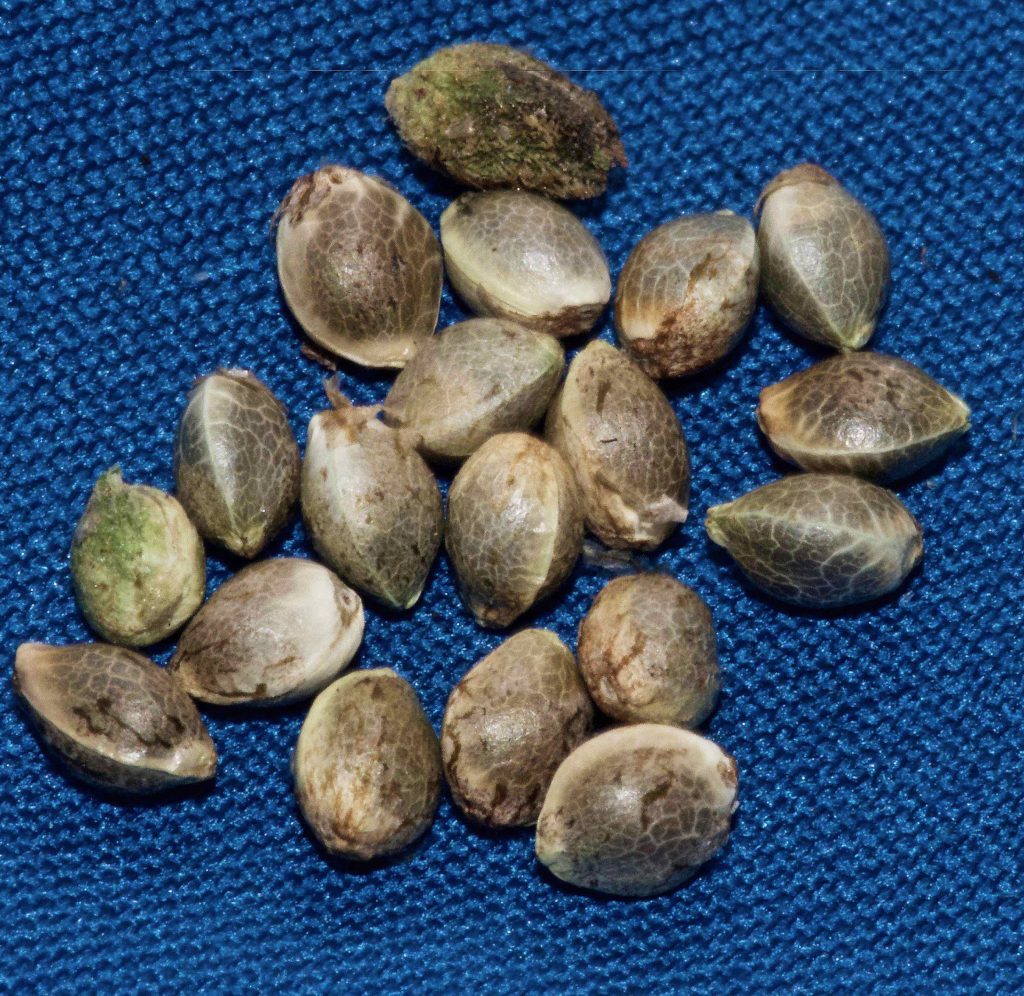 Green, split seeds and seeds that aren’t properly shaped (mature cannabis seeds should look like miniature footballs) are immature seeds that didn’t fully ripen before the buds they were forming in were harvested. These seeds are a waste of your time.

Seed defects develop if your seeds have been stored improperly, or if the seeds are more than 4–5 years old. Also, if you get cannabis seeds from the less-reputable resellers, you might receive old or otherwise defective seeds. I’ve seen growers who eagerly awaited their seed order, only to be disappointed when they tore into seed packs to discover easily identifiable duds.

In many cases, the disreputable seed seller won’t refund the order or send a replacement order, and the would-be grower is left with a mixture of acceptable-looking seeds and defective ones.

Seeds that are grayish and sheeny are old seeds, and likely desiccated. Old seeds sometimes split or crack. If seeds of any shape are pale, light brown, gray, split, or cracked, they’re defective. But you may be able to salvage some of them so they grow out into plants that yield buds.

Tried And Tested Methods For Getting Old Seeds To Germinate. But Do These Methods Work?

Growers offer many tactics for germinating old seeds, and I’ve tried all their suggestions. I want to emphasize from the outset, if cannabis seeds are grossly immature, they’re unlikely to ever germinate, and it’s not worth trying to. For that reason, the following germination suggestions are for seeds that were allowed to mature and ripen fully before they were harvested.

Method 1: One of the most generic suggestions for germinating old, stale seeds is to soak them in reverse osmosis water pH adjusted to 6.1 for 24–48 hours, before placing the seeds into a rockwool cube, rapid rooter, peat pot or other germination media.

Result: I’ve seen no benefit from this suggestion.

Method 2: This one is rather extreme and time consuming. It involves scraping off the outer layer of the seed, sometimes including the shell itself, exposing the embryo and cotyledon, which are usually white, gray-white or greenish-white.

You then place the unshelled seed material into your regular germination media. Obviously, this is a severe tactic, and you shouldn’t expect it to work. But if the alternative is to not germinate the seeds at all, it’s worth a try anyway. If it doesn’t work, you’ve lost nothing. If it works, you’re a winner.

Result: It worked for me about 15 percent of the time I tried it on old seeds.

Method 3: Another radical tactic is to manually split one side of the seed shell, narrowly exposing the embryo and other internal material that is usually protected by the hard outer shell. The split seed is immediately placed in the usual germination media.

Result: My success rate for this tactic has also been about 15 percent.

Method 4: Over the years, I’ve seen companies offer “old seed soak kits” that allegedly contain special materials that stimulate old seeds to germinate. I contacted those companies and asked for third-party test data and ingredients information so I could ascertain if its products have any validity. Strange that the customer service reps refuse to provide information beyond vague, meaningless verbiage such as, “Our product contains bio-catalysts.”

They also refused to provide product samples. I have to tell you, if a hydroponics manufacturer or seeds producer isn’t confident enough in their products to provide samples for testing, this is an indication that their products are no good.

Result: Grower friends of mine bought several brands of “old seed soak” products and found them to be no more efficacious than soaking old seeds in pH-balanced reverse osmosis water, or just putting unsoaked old seeds into germination media.

If “seed soaker” products contain anything useful at all, it would likely be gibberellic acid, which has been used to treat marijuana seeds to induce germination, vitality and female gender.

Result: I had a marginally better germination rate from the gibberellic-treated seeds.

There are other experiments you can conduct if you have old seeds and you want to see if there’s any hope for them. Experiment with using seedling heat mats at a slightly higher temperature than for fresh marijuana seeds. Another tactic is to place the seeds less deep in germination media than you normally would, at about 1/4 inch (normal depth is about 1/2 inch).

You can try placing a T5 high-output fluorescent lamp over them even before they germinate, as if the light can coax them back from the dead like Jesus did with Lazarus.

Of all these methods, one thing’s for sure: Always use proper germination techniques, materials and procedures, regardless of the condition of your marijuana seeds.

Even if you manage to coax defective seeds to germinate, you still have some challenges. Here’s an example of what I mean…

I had rare seeds given to me back in 2011. They were allegedly pure Colombian Gold genetics sourced from a lid of partially seeded buds in the early 1980s. Proper storage for cannabis seeds is in an airtight container in the non-freezer part of a refrigerator, and that’s where these had been since they were sourced.

The person who gave me the seeds said the last time he’d grown them was 2003. He had a 50 percent germination rate, but the strain was too difficult to grow outdoors where he lived due to climate conditions and because his locale’s high latitude is the wrong growing condition for a tropical sativa like Colombian Gold. After that failure, he put the remaining seeds back in the refrigerator and forgot about them.

I didn’t expect much from those old seeds. They were so tiny, about the size of a pinhead, and were pale gray, with that sad, dull sheen that characterizes old or dead cannabis seeds.

Still, Colombian Gold is a valuable strain and I had an indoor grow room I could easily control to give that rare heritage strain the environment it needed in which to thrive. I soaked the seeds for 24 hours in reverse osmosis water to which I’d added a very tiny amount of the vitamin B booster B-52, which is useful whenever you have stressed plants or seeds.

I planted 17 seeds about 1/4-inch deep in rockwool cubes and kept the seedling heat mat at 80°F. After five days, I saw no germination. But at day seven, one seedling popped its head above the cube, and by day 11 I had five Colombian Gold seedlings.

Five seedlings aren’t enough for a grow op, so I started fresh seeds of other sativa strains. Those seeds germinated in three days or fewer.

As the seedlings from other strains gained height every day and their leaves grew larger, the Colombian Gold seedlings went into suspended animation. I tried giving them varying doses of light intensity and wavelength. I kept them on the seedling heat mat. After three weeks, when seedlings from fresh seeds were nearing a foot or more in height, only one Colombian Gold seedling had grown taller, but it was still several inches behind the fresh-seed seedlings.

I ended up keeping only one Colombian Gold female. It never had the vigor, root development, bud development, stalk sturdiness or harvest weight that fresh seeds of the same strain would have yielded.

This poor little female clearly lacked vitality from its earliest days, and generally plants grown from old seeds often have to be babied along. This means giving them extra doses of vitamin B, less light intensity than the other plants in the garden, more staking and other structural supports, more carbohydrates (like Bud Candy and Microbial Munch), and more potassium silicate (like Rhino Skin) to strengthen their weak stalks.

These compromised plants lack vigor, and may take longer to mature and develop in both grow phase and bloom phase. They might have hermaphroditic tendencies, weak stalks, insufficient root development, or be especially prone to spider mites, gray mold, pythium root rot and other attackers.

I had to baby that Colombian Gold, but she rewarded me with authentic sativa buds that were long, thin, and a beautiful golden color. The high was stellar and very 1970s-ish.

If the plant had been stronger and more vital, I would have kept it as a mother plant or waited until I had suitable male pollen before breeding her. But she was an experiment, the seed she came from had lain dormant for too long, so her adult life was feeble. I was lucky to get any nice buds from her at all.

Mind you, old and stale seeds aren’t always a dead end. I’ve had nine-year-old marijuana seeds that sprouted within seven days and grew out to be lovely, strong, heavyweight marijuana plants. And those seeds had been stored in a plastic bag inside a sock in a drawer in someone’s bedroom!

The message here is that if you have defective seeds that are immature, don’t waste time on them. But if you have old seeds, there’s little harm in trying the tactics I’ve discussed to see if you can grow out any of them. You might be able to get rare genetic treasure from old marijuana seeds, which makes it worth the effort to try to germinate them.

Vermont Becomes First Grow-Friendly State To Legalize Cannabis Via State Legislature
Clone Wars: How To Get The Most Out Of Your Mother Plant With These Top Cloning Tips