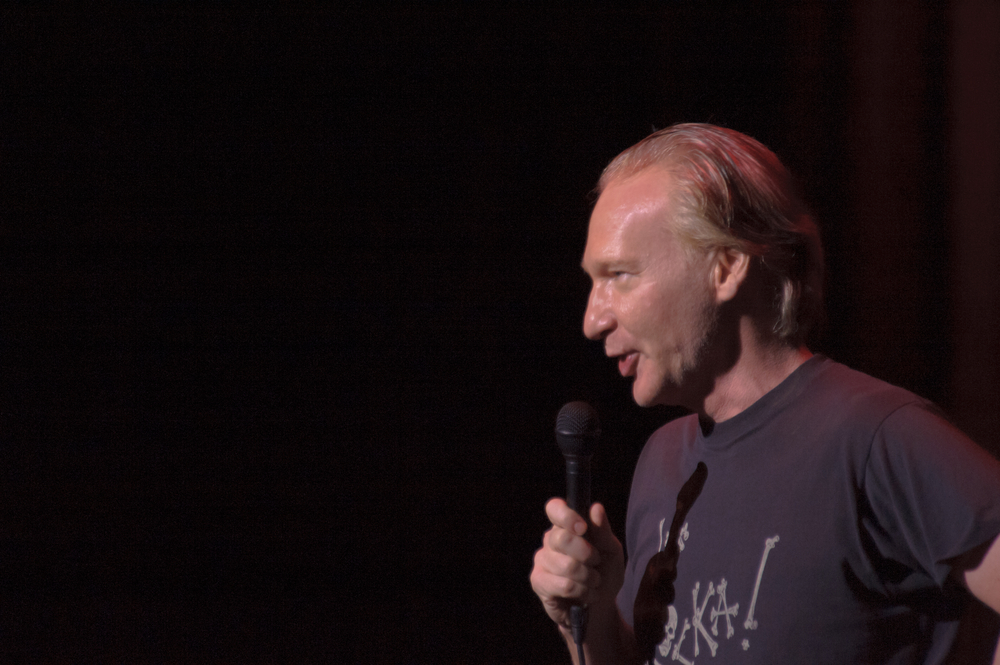 By Kathy Epstein | Published: September 7, 2013
Love him or hate him, comedian and talk show host Bill Maher is probably America’s most famous pro-marijuana comedian. I’m not talking about comedians whose entire act and persona are based on marijuana, such as Tommy Chong.  But among comedians who deal with all manner of political issues, Maher is king. In part because his HBO Real Time show reaches tens of millions of Americans every week.

Not only that, Maher made a hard-hitting documentary, Religulous, that exposed the problems created when people believe in invisible father gods in the sky. Maher, a Jew, poked holes in Judaism, Islam, Mormonism, and Christianity in a brutal but effective way.

He got a lot of haters on that one but it didn’t stop him from appearing in another “anti-religion documentary” called Sex, Drugs, and Religion.

Maher is an avowed marijuana smoker who’s made many public statements in favor or marijuana, and against the war on marijuana. Actor and comedian Zach Galifianakis allegedly smoked a blunt on Maher’s HBO show (although Maher later denied that it was “real” marijuana).

But in a recent “New Rules” marijuana commentary on Real Time, Maher really hit the cannabis ball out of the park.

I’m embedding the segment at the end of this article, so I won’t do a spoiler by telling you everything he said. But his basic premise—that full civil rights for marijuana users is the next big civil rights issue now that lesbians and gays have achieved massive expansion of their right to marry—is compelling.

The video’s other basic premise is more political, and it’s kind of depressing rather than funny, because it points out that although President Barack Obama was a pothead when he was young, his Department of Justice persecutes the medical marijuana community more than it was persecuted under Obama’s predecessor George W. Bush.

All of us who grow and use marijuana (whether it’s recreational marijuana or medical marijuana) already know we are a persecuted minority. The war on marijuana is a war on people who love a specific plant. As such, it’s a war on Nature itself, and also a war on our fundamental freedoms.

We remember that the people who created America grew the cannabis plant. In fact, when the British King sent Anglo invaders to North America to conquer, colonize, and exploit it in the 1600s, the invaders brought hemp seeds…and the King required them to cultivate hemp in the new colonies.

I’m pretty sure Tommy Jefferson and George Washington, if somehow they were 300+ years old and were looking at today’s laws regulating or criminalizing the growing of specific plants like marijuana, peyote, and opium poppies, would say that those laws and regulations are an attack on basic freedoms they wanted for Americans.

Religious fanatics, right-wingers, police, and others have relentlessly threatened Maher with violence because of his progressive political views about gay marriage, war, and right-wing lies, and because of Religulous.

But Maher never backs down. Unless YouTube has removed it, use this link to watch Maher explicitly call out President Barack Obama, while giving our marijuana community a potent tip for how we can fight back against the drug war.