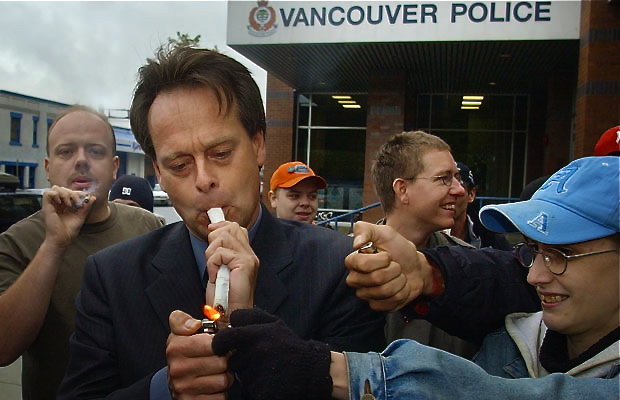 In 2005, United States government agents arrested one of the world’s most successful and effective marijuana activists.

He began his career as a book seller and free speech activist, moved to British Columbia, founded Cannabis Culture magazine as an alternative to High Times, created a marijuana political party, sold millions of marijuana seeds worldwide, and turned an entire block of downtown Vancouver into a pot party mini-Amsterdam.

But if that’s all he’d done, Emery probably wouldn’t have been caged in federal prison in the American south for the past five years.

Before the DEA busted him in 2005, Emery had been busted numerous times in Canada for public marijuana activism, but the charges laid against him were never federal charges, and they didn’t carry potential life imprisonment sentences.

At one time or another during the 1990’s and until Emery was arrested by U.S. agencies in 2005, virtually every important and effective marijuana activist and organization received money from Emery.

That’s what brought him to the attention of American authorities, and led to his arrest.

In fact, after Emery was arrested by the U.S. government and charged with cannabis crimes that had potential life imprisonment penalties, U.S. officials explicitly stated they’d arrested him for funding marijuana activism.

Spooked by the arrest, some of the people and organizations Emery funded distanced themselves from him.

But his lovely and loyal wife Jodie Emery (herself an international marijuana activist), and thousands of marijuana growers, users, and activists have always kept a political vigil for the imprisoned man.

They send him gifts, letters, cards, books, and funding and also mounted constant media and political campaigns demanding his early release, a pardon, or at least a transfer to a Canadian prison.

Despite their efforts, the U.S. and Canadian governments went out of their way to deny Marc Emery any leniency.

In fact, Emery was put into solitary confinement and otherwise unfairly targeted in prison because he did radio shows from prison and wrote blogs complaining about unsafe prison conditions.

Many of us worried that when the 56-year-old cannabis activist and marijuana seed entrepreneur was put into a cage and deprived of his wife, his marijuana, healthy food, and competent health care, that he’d suffer tremendously.

Well, he has suffered tremendously, but Marc Emery never surrendered, never backed down, and never stopped telling the truth.

He has always stayed true to his principles and causes, even in the face of the draconian arrest and sentencing that stole nearly a decade of his life.

In prison, Marc Emery organized a rock band, helped other prisoners, and constantly advises Canadians to fight Canada’s government, as it implements a vicious war on marijuana that resembles the worst days of American pot prohibition.

He was released in 2014 after serving more than four years of a five year sentence.

If an accurate history of North American marijuana legalization is ever written, Marc Emery will be described as a one-of-a-kind cannabis visionary and philanthropist… a courageous man who gave up years of his life to help end the war on marijuana!