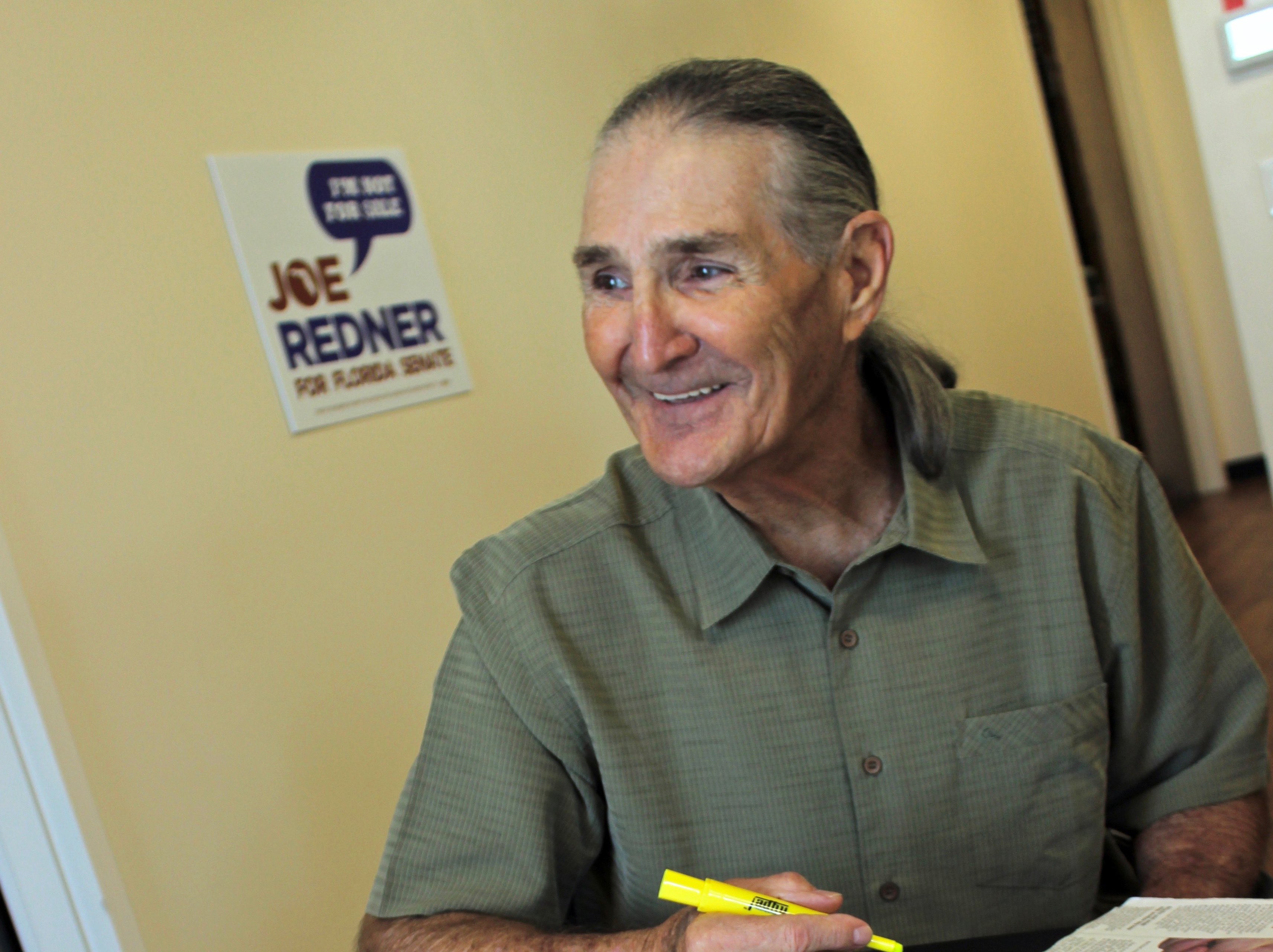 Today, Redner has won a landmark lawsuit that makes him the first Floridian legally allowed to grow his own medical marijuana. The ruling is likely to set a precedent that allows other medical marijuana patients in the state to also grow their own.

Redner’s successful lawsuit was based on his reading of Amendment 2, also known as the Florida Medical Marijuana Legalization Initiative, a constitutional reform to the medical marijuana law passed by 70 percent of Florida voters in 2016.

The amendment allows patients with a registered doctor’s recommendation to use medical marijuana for epilepsy, glaucoma, cancer, HIV/AIDS, post-traumatic stress disorder, as well as several other conditions. Redner was dismayed that the amendment as implemented by the state legislature continued the state’s long-held ban on personal growing, and severely restricted what forms of cannabis patients could purchase, and where they could purchase it from.

Redner filed the original lawsuit in 2017, challenging the legislature’s interpretation of Amendment 2 because it didn’t allow him to grow lifesaving cannabis to fight the advanced-stage lung cancer he lives with.

Unfortunately, the Florida legislature’s interpretation of Amendment 2 prohibited patients from growing their own cannabis, which in turn prevents them from raw cannabis juicing. Patients have legally only been allowed to buy oils, edibles and capsules that aren’t useful for raw juicing, and patients aren’t legally allowed to inhale combusted cannabis, either.

Redner’s lawsuit asserted that the Constitution of Florida, altered by voters via Amendment 2, defines marijuana as a growing plant, not just harvested parts of a plant, and that registered patients should be allowed to grow their own.

On April 11, 2018, Florida’s Leon County Circuit Judge Karen Gievers agreed with Redner’s lawsuit, ruling unequivocally that Redner is “entitled to possess, grow and use marijuana for juicing” and that the Florida Department of Health (DOH) “has been, and continues to be, non-compliant with the Florida Constitutional requirements.” Judge Gievers also added that the DOH “has no authority to modify the rights of patients that Floridians have chosen to place” in the state’s constitution. 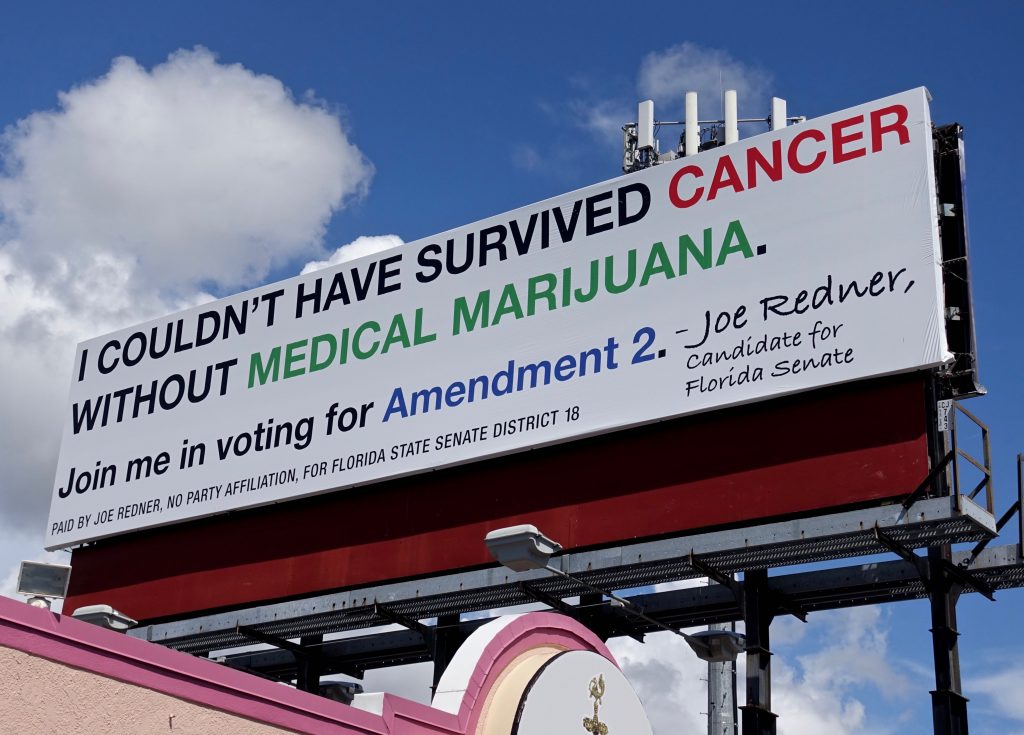 Redner erected this billboard when he was running for public office in Tampa. (Image courtesy of Steve Davis)

Following the judge’s ruling, Redner, who is no stranger to David-and-Goliath-style political battles, celebrated with his attorneys and allies in Tampa.

“Finally. It’s about time. What took them so long?” Redner said while commemorating the decision. “The constitution says what it says, and the judge recognized that. I’ve been saying all along: The Department of Health and the legislature can’t take away the rights that the constitution gives you. This is a victory for all sick and dying people who want to use the best medicine they can grow.”

In a section of the judge’s opinion, entitled, “DOH Violations of the Law,” Gievers takes particular aim at the DOH’s failure to fulfill its duties under the constitution. The department, Gievers claims, has “without the authority to do so, attempted to limit access of qualifying patients to various methods of administration.”

While Redner is understandably very happy with the judge’s ruling, his victory doesn’t automatically make it legal for anyone participating in Florida’s medical marijuana program to immediately start cultivating their own cannabis plants.

When a judge makes a constitutional ruling, there’s an automatic delay (known as a stay) before the ruling becomes legal precedent for anyone other than the plaintiff who filed the lawsuit.

Redner told us he already requested the judge preemptively waive that delay, because sick and dying medical marijuana patients need to start growing their own weed right away.

He suspects the state will appeal his victory to a district court and perhaps even the Supreme Court of Florida, and try to get the GOP-controlled legislature to attack the victory via new legislation.

This is not the only medical marijuana lawsuit Redner has filed against the state. He formed a medical marijuana growing and retail company called Florigrown, and is currently seeking one of the coveted and rare state licenses that allows a company to grow and sell cannabis.

“The state uses an unfair, arbitrary method to choose who gets a medical marijuana growing and retailing license,” Redner explains. “Their selection process is prejudicial and plays favorites. Florigrown would produce a much higher quality of medical marijuana compared to the companies currently doing it [in Florida].”

Now, growers across the state of Florida are hopeful that the judge’s ruling in Redner’s case survives court challenges and attacks from the Florida legislature’s Republican anti-drug crusaders, so that all qualified medical patients in the state can finally grow the healing plant, without fear of a hefty prison sentence.

Rookie Error? Not So For This Grow. Nine Common Grower Mistakes You Can Avoid
Snip And Clip The Roots Of Your Cannabis Plants For A Healthy, Heavy Harvest