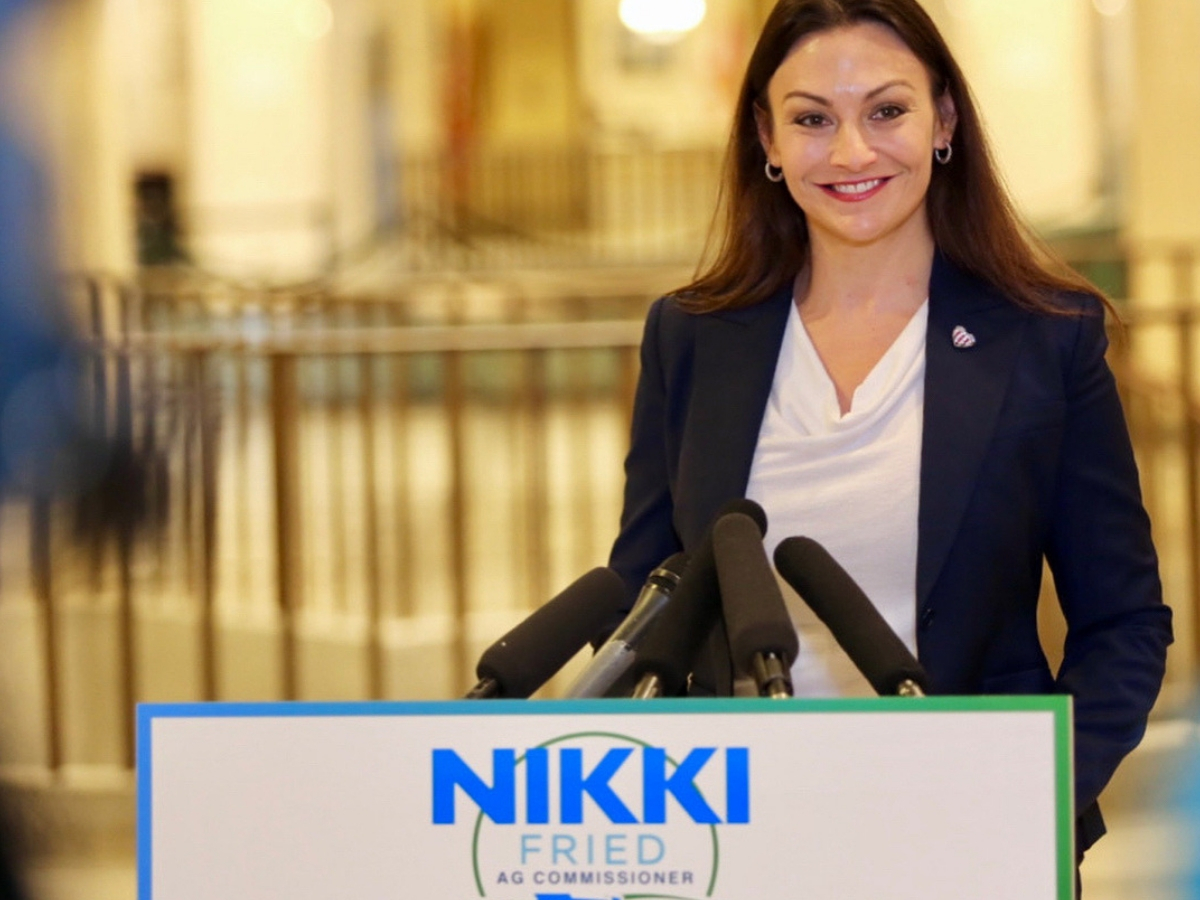 To fully understand why cannabis legalization will not be complete and legitimized until federal legalization happens, one only has to consider the case of Florida politician Nikki Fried.

As a lobbyist and the Democratic candidate for the office of Florida agriculture commissioner, the state’s legal medical marijuana industry has been one of Fried’s most important issues.

But two separate financial institutions have shut down bank accounts used by Fried and her team to host campaign funds, due to her ongoing support for medical marijuana. Both banks cite federal cannabis laws as their rationale.

In an email statement regarding the shuttering of Fried’s accounts, Wells Fargo said that it is the bank’s “policy not to knowingly bank or provide services to marijuana businesses or for activities related to those businesses, based on federal laws under which the sale and use of marijuana is illegal even if state laws differ. We continually review our banking relationships to ensure we adhere to strict regulatory and risk guidelines.”

While Fried is a friend of the cannabis industry, she’s not a grower, producer or seller of cannabis products, nor is she a provider or seller of ancillary products, like cannabis packaging or infrastructure. Rather, she has a decades-long career as a highly regarded attorney, public defender and lobbyist.

As a lobbyist and attorney, Fried was a major facilitator of Florida marijuana law HB 307, the Medical Use of Cannabis, which was passed in March 2016, before voters approved Florida’s Amendment 2 medical marijuana law in November of that same year. HB 307 helped ensure access to medical marijuana for terminally ill patients.

Fried, however, is not just a major lobbyist on behalf of legalized cannabis businesses. Experienced in complex commercial litigation and in foreclosure defense litigation, Fried served in the Eighth Circuit Court Public Defender’s Office. As a candidate in the 2018 contest to become Florida’s agriculture commissioner, she’s also pro-environment and pro-choice, and plans to implement new procedures and safeguards regarding concealed weapon permits. Fried has also been widely endorsed by many groups, including the Service Employees International Union, as well as members of the LGBTQ community.

Indeed, Florida-native Fried has enjoyed plenty of support in her home state due to her stellar academic, civic and professional career.

In the 2018 campaign, Fried is making it clear that expansion and improvement of the state’s medical marijuana program would be one of her top priorities if she becomes agriculture commissioner.

So, Who Are The Banks That Terminated Nikki Fried’s Campaign Accounts?

Enter the villains in this saga: Wells Fargo Bank and BB&T.

Wells Fargo is typical of the “too big to fail” banks whose bad practices contributed the 2008 global banking meltdown, recession, and subsequent trillion-dollar taxpayer-funded bailout of the largest banks. According to Fortune, Wells Fargo has been hit by a bill for around $3.3 billion due to its actions that allegedly contributed to the 2008 global financial crisis.

CFPB — a federal consumer protection agency that Donald Trump is trying to shut down, according to multiple reports — subsequently ordered Wells Fargo to pay full restitution to all victims and the $100 million fine to the CFPB’s Civil Penalty Fund.

John Stumpf, the bank’s CEO during this recent era, stepped down because of the scandals — and walked away with a $130 million payout. Before his departure, he was castigated by Republican and Democratic politicians during congressional hearings for the part he played in the bank’s fraudulent activities.

As Stumpf tried to portray Wells Fargo as an ethical bank that made a few innocent mistakes, Republican congressman Jeb Hensarling said, “Fraud is fraud. Theft is theft. And what happened at Wells Fargo over the course of many years cannot be described any other way.”

Trying to counter its many scandals, Wells Fargo has embarked on a massive, expensive public relations campaign to rebrand itself as a trustworthy financial institution. And given its reputation, you’d assume the last thing it’d want to do is discriminate against the medical marijuana industry or a popular politician and lobbyist like Nikki Fried.

But that’s exactly what it has done. During Fried’s campaign as a candidate in the primary election, Wells Fargo, who was hosting her campaign bank account, reached out to the politician to express its concerns about her advocacy of legalized medical marijuana. Fried received emails from bank officials, who wanted to know if she had or would be receiving campaign donations from medical marijuana lobbyists.

“They told me my account was being flagged because of my political platform,” Fried said during a press conference.

According to the LA Times, a Wells Fargo senior relationship manager wrote in an email to Fried campaign treasurer Gloria Maggiolo, “Can you confirm the types of transactions expected for this customer and if any of the transactions will include funds received from lobbyists from the medical marijuana industry in any capacity?”

This was a bizarre question, given that Fried is publicly known as a medical marijuana lobbyist. When Fried and her team confirmed they welcome donations from lobbyists, companies, employees and executives that operate in the medical marijuana industry, Wells Fargo contacted Fried on August 3 to inform her she had 30 days to transfer her money before the bank closed the account.

According to the Miami Herald, Fried’s campaign immediately transferred the account’s $137,000 to BB&T and closed another campaign-related account hosted by Wells Fargo.

“This is absolutely unprecedented,” Fried said in a telephone interview, according to The New York Times. “I’ve been in this campaign since the beginning of June. Everybody in Florida knows that I’m one of the main proponents of the expansion of medical marijuana.”

Wells Fargo’s concerns about banking regulations and cannabis are not unfounded. While cannabis remains federally illegal, with the Department of Justice revoking protections for cannabis laws in legal states last January, the Treasury Department wrote in a letter to Congress earlier this year that it is “reviewing the [banking] guidance in light of the Attorney General’s announcement and are consulting with law enforcement.”

These federal limitations are why almost all legitimate, licensed cannabis businesses are cash only, which causes many headaches for business owners, employees and customers alike.

So, why would Wells Fargo take such action against a political candidate?

Florida political insiders suspect it’s not about cannabis money at all. Rather, it’s because Fried worked on behalf of victims of Wells Fargo’s wrongful foreclosure actions several years ago.

According to Reuters, Wells Fargo recently disclosed to the Securities and Exchange Commission that from 2010 to 2015, due to a glitch in the bank’s computer system, approximately 625 customers were incorrectly denied a mortgage modification or were not offered one in cases where they would have otherwise qualified.

Because of the bank’s errors, approximately 400 customers lost their homes to foreclosure.

The suspicion that Wells Fargo targeted Fried for punitive reasons is bolstered by the fact that the medical marijuana industry, including major growers and sellers such as Florida’s Surterra Wellness, have spent hundreds of thousands of dollars in campaign contributions to both major political parties, and it appears that none of those beneficiary politicians have been targeted by Wells Fargo or any other bank.

“I’m not touching a marijuana plant, I’m not selling a plant, I’m not producing a plant — I’m simply advocating for the expansion of medical marijuana and that was the reason for closing me down. I was specifically targeted,” Fried said. Her campaign has since encouraged voters to close their Wells Fargo accounts and do their banking elsewhere, as she has done.

“Close your Wells Fargo account as soon as you can. They don’t deserve your business,” Fried’s team said via a fundraising email.

And having shifted her funds to BB&T, this second financial institution was looking like the good guy — that is, until the end of August, shortly before the Labor Day weekend, when Fried was contacted by a member of BB&T staff, who informed her that her campaign account would be closed within 30 days. The bank then sent an email saying the account had to be closed by September 5.

BB&T’s actions forced Fried and her campaign staff to scramble to find yet another bank, at a time when political campaigning should be their focus. The bank’s actions can feasibly be seen as a backhanded way of harming Fried’s candidacy.

BB&T said in a statement that it rejected Fried because it has to follow federal law, which prohibits the consumption, sale, business and possession of all forms of cannabis.

“While BB&T has no position on the issue of marijuana or the ongoing discussion regarding its legalization, we must continue to abide by all applicable laws and regulations as a federally-regulated financial institution,” BB&T spokesman David White said.

Interestingly, if elected in November, Fried will serve in the Florida Cabinet and have a say in appointing the director of the state’s Office of Financial Regulation, which oversees Florida’s financial industry. Fried will likely be paying close attention to the banking sector, in part because banks have interfered with her right to free speech and ability to run a successful political campaign.

Fried has gained plenty of support from the Florida medical marijuana industry and marijuana consumers in her bid to be the state’s next agriculture commissioner, and is unlikely to let this setback upset her campaign goals.

“We’re looking into legal actions because of what these banks did. We are looking to take aggressive action, because their actions are not acceptable,” Fried tells Big Buds exclusively. “They’re targeting me directly because I am making legal medical marijuana such a pivotal part of my campaign.

“The action of these banks is exactly why we need changes to our antiquated federal laws,” she continues. “These banks are trying to silence my voice and the voices of millions of patients across the country. This just makes me fight harder. We will not stop, because people are suffering and they need leaders to stand up for them.”

Fried welcomes any help that you can provide her campaign in the lead-up to November’s general election.

How A Little Puff, Puff, Pass While Climbing A Mountain Can Help Quell The Pain And Nausea Of Altitude Sickness
Dutch Passion Talks Going Global As Cannabis Legalization Continues Its Worldwide Spread