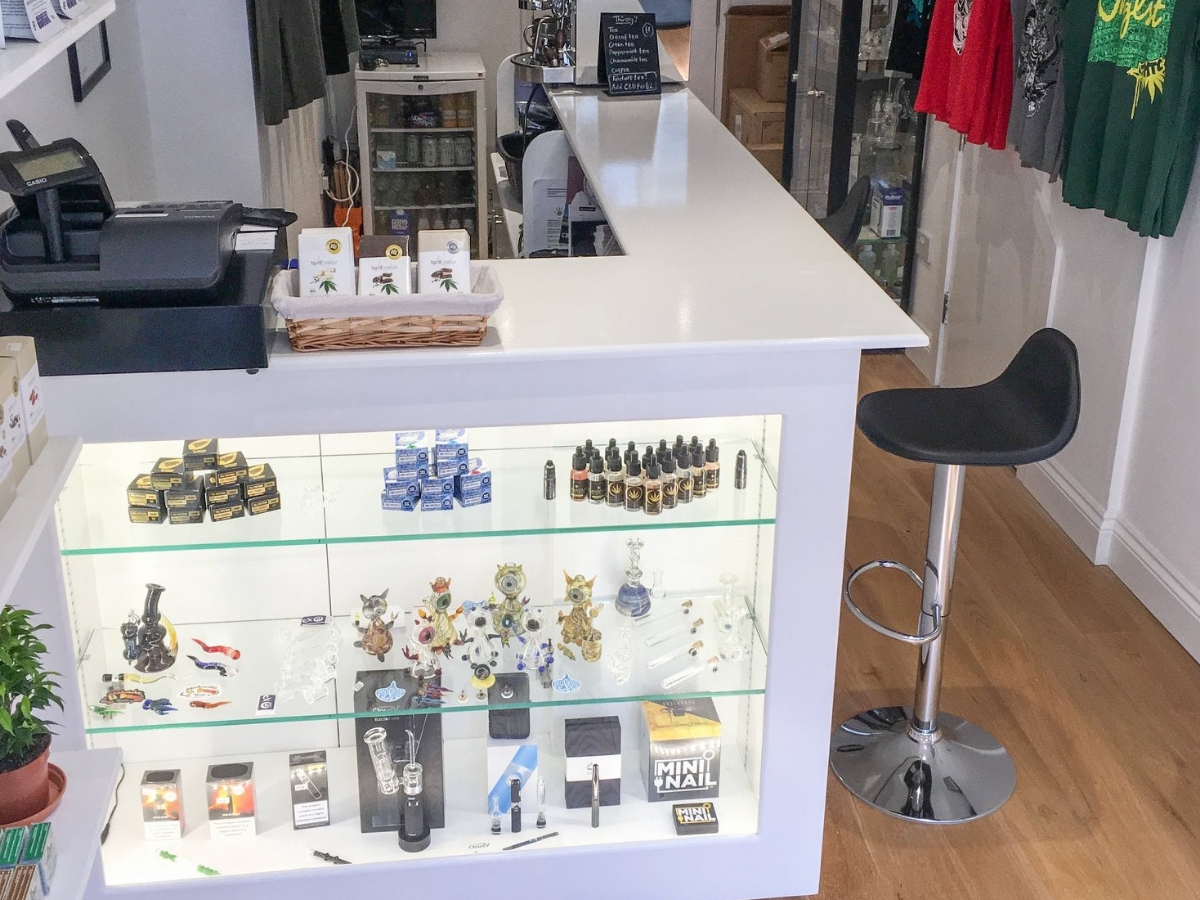 Cannabidiol — or CBD, as it’s more commonly known — was only given the green light to be consumed medically in the United Kingdom at the end of July. But one intrepid duo is ahead of the game when it comes to the cannabis industry, opening up the nation’s very first legal CBD shopfront.

Shaun Davison and Ryan Cahill, both aged 31, have been trading as CBD Ethics for six months and already the pair are looking at expanding, thanks to the popularity of their store.

The duo, who have been firm friends for 15 years, decided to open the premises, located in Brighton on the south coast of England, after enjoying positive experiences from consuming CBD for medicinal purposes themselves.

Davison explains, “Ryan was in quite a bad motorbike accident and found CBD products were helping him. I was in quite a stressful job at the time and was using CBD to help with that.”

The pair, having experienced firsthand the benefits of CBD consumption, simply wanted other people to do the same.

Having previously worked in a photographic studio, Davison adds, “We had a lot of people asking about good CBD products. They were struggling to find good brands and there was a lot of confusion in the marketplace. So, we thought we would set up a place where people could come and try the products, rather than blindly order it all online. We are one of the only shops dedicated to selling CBD products in the country as far as we know.”

Their customers generally range from the curious novice, to people who are suffering with stress and anxiety, as well as those who have more serious health complaints.

Regulations regarding cannabis and consumption are extremely tight in the UK, with the plant currently still illegal for recreational use, although widely consumed. Indeed, the slightest slip when it comes to talking to and communicating with its clientele could see CBD Ethics shut down.

“We are not allowed to make any medical claims,” Davison says. “We say we are health focused. Much as we would love to shout about the medical benefits, we can’t. We have to be careful on the information we can give.”

He goes into greater detail about how CBD Ethics operates within legal parameters, plus additional levels of care the duo choose to give their customers: “We don’t sell to under 18’s and we make sure all the products we sell have been independently lab tested. And we check all the lab reports to see they are legitimate reports and not just someone printing them out. We are doing our own sort of protocol on what makes a product legal.”

In late July, the laws in the UK regarding medical marijuana were relaxed after the Home Office — the leading government department for immigration and passports, drugs policy, crime, fire, counterterrorism and police — announced that medical doctors would be allowed to prescribe it legally to patients in certain circumstances.

This followed a specially commissioned review in the wake of several high-profile cases, including that of two young epilepsy sufferers, Alfie Dingley and Billy Caldwell, who appeared to have their seizures eased by cannabis oil.

UK Home Secretary Sajid Javid said at the time of the July decision, “Recent cases involving sick children made it clear to me that our position on cannabis-related medicinal products was not satisfactory. Following advice from two sets of independent advisers, I have taken the decision to reschedule cannabis-derived medicinal products — meaning they will be available on prescription.” 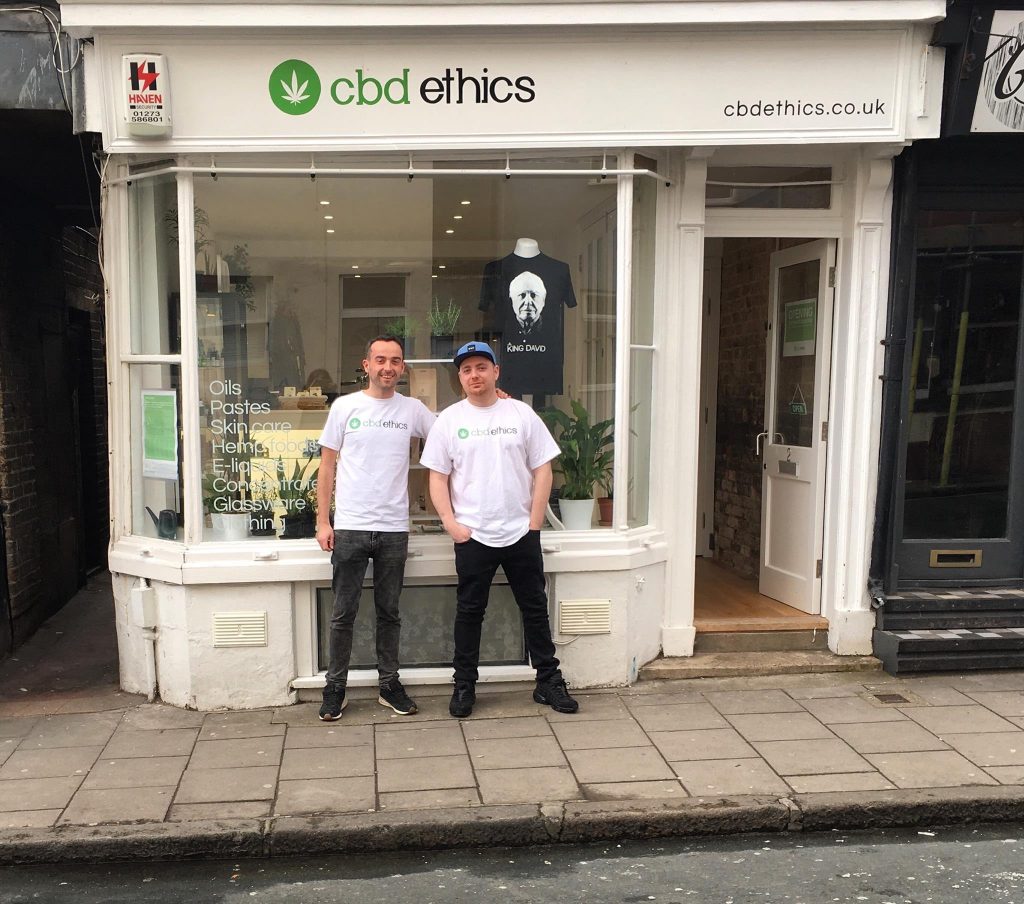 According to Davison and Cahill, CBD Ethics’ top-selling products include vapes, concentrates and tinctures. Among those products is Canavape, a terpene-infused CBD and CBG (the lesser-known non-psychoactive cannabinoid cannabigerol) e-liquid, which the duo class as good for consumers who want to feel the benefits of CBD sooner, as it is absorbed into our bodies much faster by inhaling.

But their biggest selling concentrate is Synergy Extracts terpene-enriched CBD Crumbles and CBD Crystals, which Davison and Cahill class as great for those who love the taste of cannabis but don’t want to feel a psychoactive high. “The advantage of these is their high purity and strength,” Davison advises.

Most popular among the tincture and oil brands sold at CBD Ethics include Cannawell, Amma Life and CBD Brothers. “These [products] are very versatile and come in a wide range of strengths and blends of cannabinoids and terpenes, so there is a lot of options for different needs,” Davison explains. “We even have some water-soluble sprays that can be enjoyed in a drink in store or taken away.”

The pair have to be incredibly careful when it comes to dealing with Trading Standards, walking a tightrope to make sure they stay on the right side of the law.

“We speak closely to Trading Standards and stay guided by them,” Cahill asserts. “There have been a lot of gray areas in the [cannabis] business, so we want to make sure we stay safe. Whenever we take a step, we put it past [Trading Standards].”

However, despite the narrow legal framework in which CBD Ethics operates, the pair still manage to offer an extensive range of products and advice, selling a number of different tinctures, balms and oils, as well as offering hemp tea and cannabis-infused coffee to their customers.

While some of these products may contain trace elements of THC, it’s such a small amount as to be the equivalent to drinking a low-alcohol beer.

Perhaps given to the fact that the UK has always ranked as one of the top tea-drinking nations in the world, the lads at CBD Ethics say that cannabis tea is one of the more popular products they sell, with many first-time consumers wanting to start with a familiar herbal infusion to feel CBD’s effects.

“Our tea is just relaxing and calming generally,” Cahill says. “Some customers who have been down and depressed, we find they have the tea and it just generally improves their mood and makes them feel a bit nicer. When people ask about it, we tell them it is like drinking a strong chamomile — it is calming and relaxing. A lot of people ask if they are going to get high, but you don’t.”

The pair have found that one of the more frustrating things about operating a CBD business legally is that they’re unable to give any indication of what they believe are the medical benefits of consuming the non-psychoactive cannabinoid, due to the legal restrictions in the UK, but have found nonetheless novel ways of getting around the limitations.

“We say CBD is going to make you comfortable,” Cahill reveals, before adding, “People come in with all sorts of different ailments. If people say they want a clear head and no stress, we suggest just CBD — but in no way is it ever medical advice. If it is more [that they are physically] uncomfortable, then we will highlight something stronger.

“You have to be very, very careful,” Cahill continues. “It is like turning on glass. If you say the wrong thing to the wrong person, you can get shut down in an instant. At the moment, we have to sell all our products as food supplements. So, we can say our products improve your general wellbeing and health, but we are not allowed to say this bottle of oil is really good for a certain condition.”

Instead, Davison and Cahill merely offer suggestions, telling customers about what products have been popular sellers at CBD Ethics. But they are extremely careful to not make any kind of medical claim, saying even anecdotal information can cause a legal problem for their business.

“We have had some customers who have had really serious health complaints and they have gone to the doctors after taking the [cannabis] product and seen proof of how much it has helped,” Cahill says. “But we don’t want to say to another customer, ‘Buy this bottle and see the same results.’ We want to be ethical about it. Some people are really desperate and we have to advise them in a very careful way.”

Now, with one shop doing so well, the pair are preparing to launch their online store. And they also have plans for a franchise and their own CBD range of products in the future.

“We are going to see how the laws pan out in the UK over the next few months,” Davison says. “Whether we will see it available on prescription soon. It might be taken out of our hands.”

Booze Intrusion: Big Alcohol Is Already Planning Its Cannabis Takeover
The Trump Administration’s War On Weed Has A Secret Committee To Take Down Cannabis