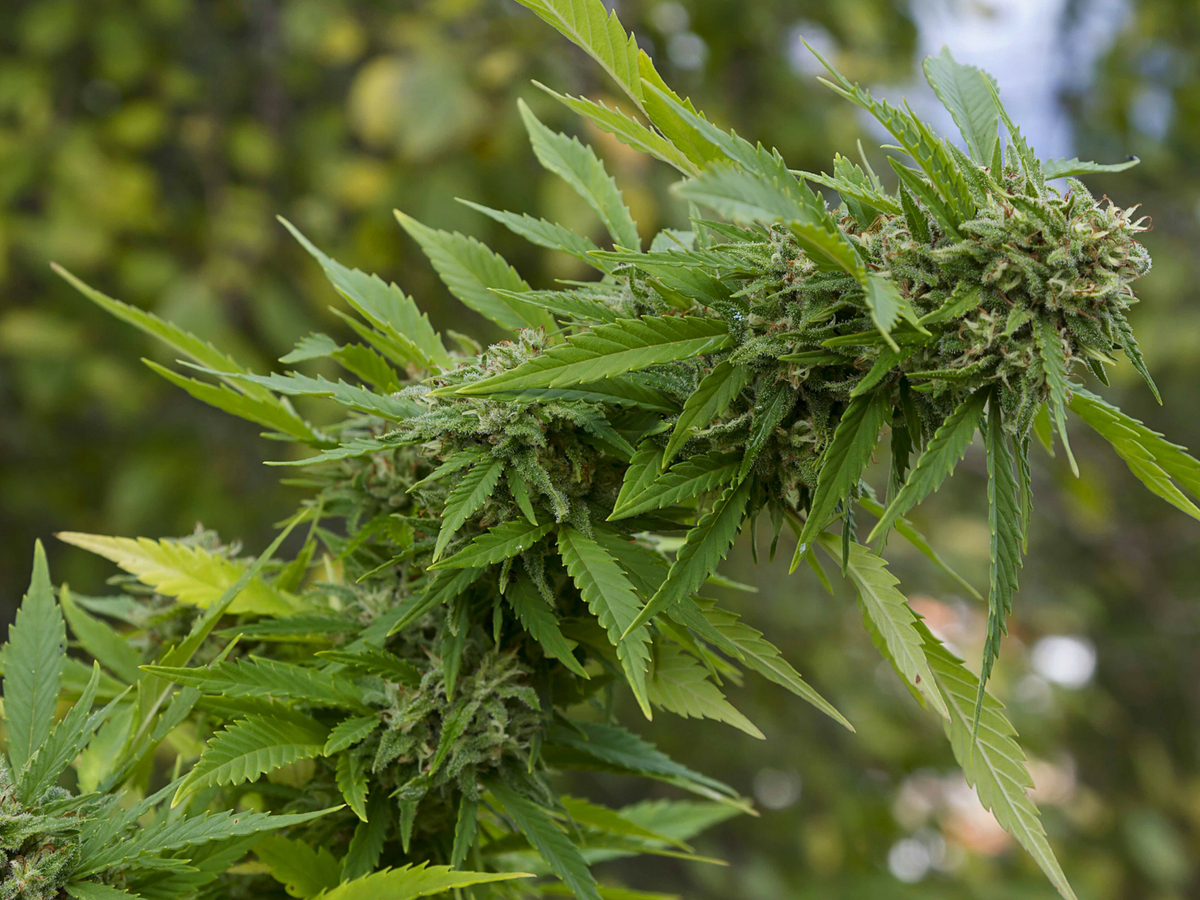 How do you describe a High Times Cannabis Cup to a 62-year-old from the Midwest who’s never smoked pot?

After a few feeble attempts describing chilled-out scenes and surreal moments viewing pounds of marijuana that in many US states would equal jail time, it felt best to let experience be the guide.

So, on a recent visit to California, Shelley T. was up for it.

A physician’s assistant by trade, and a consummate gardener of everything from lavender to quince, Shelley says she recently became interested in growing cannabis as a possible remedy to treat her 70-year-old husband’s neuropathy. She says she’d been buying CDB oils online — paying a high premium for those medications — and figured she could produce her own marijuana-based salves and tinctures if she had the right base material.

In search of pot seeds for her maiden marijuana grow, the High Times NorCal Cannabis Cup in Sonoma, California was a surefire starting point for Shelley to procure quality genetics.

“I really hadn’t the faintest idea about what to expect,” she says. “But now that I’ve been, I can tell you, for me, it was like a cross between an amusement park, a Grateful Dead tailgate, and a really sophisticated farmers market.”

The weekend-long event put on by High Times magazine from June 2–3 — which actually did host Grateful Dead guitarist Phil Lesh, among other musical acts — was one of the first on-site pot consumption events of the year since California voters approved Prop. 64 legalizing recreational weed.

With legal sales currently popping all across the state since legalization officially began on January 1, the NorCal Cup was circled on stoner calendars from Yreka to San Ysidro as a must-see happening for the weed-centric.

But it also attracted the likes of newbie enthusiasts such as Shelley, who at one point during the cup stood in absolute wonder and awe while looking at a beautifully draped seating area and a pretty chalkboard sign that read: “$10 Dab Flights.”

“It blew my mind,” says Shelley, describing a vendor at the event advertising concentrate samples of the pot strains Sweet Cindy and GG4. “I had no clue that cannabis had graduated to that level of culture.

“The lounge area they’d created,” she continues, “could have been pulled right out of Sunset magazine. It was so stylish, and I think designed to attract people like me. Like the ‘Napa wine-tour crowd,’ maybe.”

There were no maybes about it. High Times undeniably billed this year’s cup with a slant toward recreational attendees and the more mainstream market. The aim was for accessibility to the masses, rather than in previous years, where the motif was more focused on the dankest bud in show.

Typically an event that celebrates the finest new cannabis products in different regions across the United States and abroad, this year’s cup was billed by High Times as “the world’s leading music and lifestyle festival featuring main stage music performances, exhibitor village, live podcast recordings, culinary experiences and much more.”

Show attendee and cultivator Mitch Creel, from nearby Cotati, says the general admission price tag of $60 was a no-brainer for him. He explains how just 20 minutes inside the gates he was handed several grams of bud for free by a friendly vendor.

“The guy was so excited to share the marijuana he’d cultivated,” Creel says. “I told him I was in the market for good cannabis seeds, and that was his way, I think, of showing me that his product came from top-quality genetics that he’d created himself.”

Creel says he ended up buying the grower’s seeds. 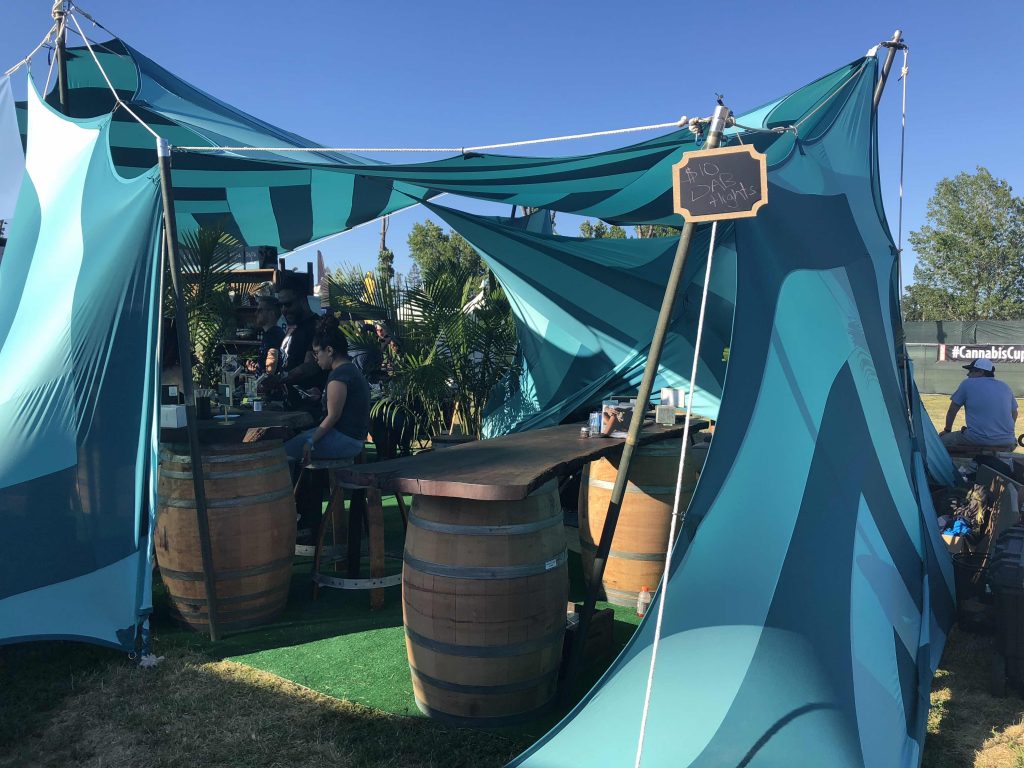 At the High times NorCal Cannabis Cup, dab flights were on offer for those who could handle. (Image courtesy of David Carpenter)

That’s really the spirit of the Cannabis Cup experience in general — the sharing and celebration of growing good marijuana. In a trade that’s operated for many decades in the shadows of the black market due to prohibition, these cup contests and meet-ups have been one of the key ways to build the community. Add to that the fact that cannabis growing has always been a sort of crowd sourcing of information. From the time adventurous heads in the 1970s smuggled pot seeds from places like Africa and Pakistan into the Netherlands and the US, marijuana has been all about sharing genetics.

Jerry Munn — a Cannabis Cup vendor, cannabis farmer and seed breeder from Mendocino County — was in his element at the event, seeming to straddle the two worlds of longtime cannabis cultivator and mainstream seller with ease. He handed Shelley and I some excellent complimentary flower, his Mendo Dream strain, and provided detailed information about his operation.

Founder of First Cut Farms and Mendo Seeds, Munn says his specialty seeds are now making their way across the world.

The veteran cultivator, with nearly three decades of grow experience and pot activism under his belt, says he has created an eco-conscious farm using biodynamic and regenerative farming practices.

While the cup was a very chilled-out affair (Shelley pointed out that she didn’t see one out-of-control person, like she was accustomed to seeing at alcohol-centric events), it wasn’t without a hiccup or two.

Since rec sales began this year, California’s Bureau of Cannabis Control has been tasked with taming the black market and the predictable coaxing of black- and gray-market growers and sellers over to the legitimate, regulated market. This wrangling of cannabis providers spilled over to the Cannabis Cup, with The Press Democrat reporting that plainclothes officers shut down the booth of a local marijuana delivery service for selling seven 1-pound bags of marijuana to customers.

“This was not an easy process to get to a full recreational event,” High Times publicist Jon Cappetta told The Democrat. “Unfortunately there are people who take that as an opportunity to skirt the law, which is not uncommon for this industry. We have a lot of people who have been operating in the shadows for a long time and they think they can still get away with it. But that’s not the way things work.”

Shelley ended up buying her marijuana seeds, she says, “from a nice young man who sat and talked with me and explained the characteristics of the strain I want to grow.”

She’s headed home with her Strawberry OG, she says, and a different understanding of cannabis and pot culture.

“I found it really interesting that I got more time from that seed breeder than I ever get from the people at Walgreens,” she says. “I was really happy to buy his seeds.”

Chalk one up for marijuana making a good first impression on the mainstream.

“You can bet I’ll tell my friends back home about all this,” says Shelley. “This was an enlightening experience.”

Look out for the next High Times Cannabis Cups in Michigan from June 9–10, and Amsterdam from July 13–15.