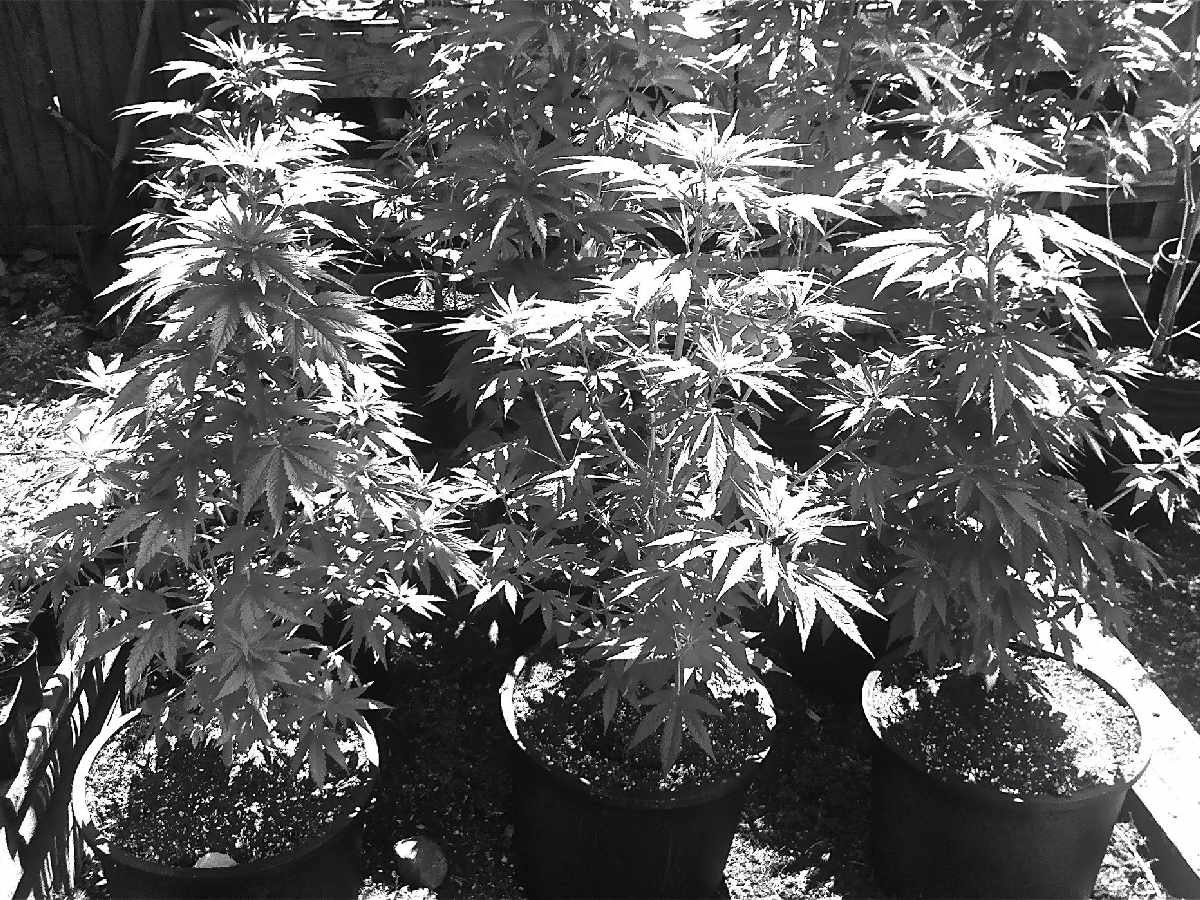 You’ll see an embedded video in this article about some guy finding a marijuana garden in the woods. Not fun for the grower.

This article talks about marijuana’s enemies, and how to defeat them.

Mites, thrips, aphids, root aphids, ants, whiteflies, fungus gnats, slugs, snails, caterpillars, and grasshoppers are pests you don’t want to see on your marijuana plants or in their root zone.

Keeping marijuana growing conditions in ideal range for temperature, humidity, and cleanliness is a big step towards preventing some pest infestations, but you can’t control conditions in outdoor marijuana gardens.

Here are some interventions that may work to defeat pests:

Of these, gray mold and powdery mildew are the most common plagues for marijuana growers.

Gray mold shows up in humid conditions and is especially likely to attack fat, dense buds and marijuana strains known to be susceptible to molds.

In grow phase your options for controlling molds and mildews include spraying and/or feeding fungicides, beneficial bacteria, and sprays that disable the organisms.

For powdery mildew in an indoor marijuana garden, a sulfur burner works well to control powdery mildew, but comes with hazards such as heat and sulfur toxicity (mostly to you- don’t breathe airborne sulfur).

The best strategy against pathogenic marijuana enemies is preventive: keep your marijuana grow environment in temperature and humidity ranges that deter molds and mildews.

Control your grow environment to exclude molds and mildews.

However, a general rule is that the more direct sunlight and air circulation your crops get, the less likely gray mold will develop.

If you’re in control of watering and feeding, don’t overwater your marijuana plants, and avoid feeding them high nitrogen during bloom phase.

In outdoor marijuana growing and in bloom phase you have fewer mold and mildew foliar spray control options, because anything you spray on your marijuana plants is going to stay on them and be consumed.

Outdoors you cannot control rainfall or humidity, unless you’re growing marijuana in a greenhouse.

In situations like that, removal of affected plant material may be one of the only strategies that work.

Sometimes you have to anticipate potential losses and may decide to harvest early rather than lose the entire marijuana crop to gray mold or powdery mildew.

Your marijuana plants’ most potent enemies are other humans, especially in an outdoor grow.

Hunters are especially notorious for finding outdoor marijuana crops and either stealing them or narking them.

Similarly, loggers, miners, realtors, ranchers, developers, surveyors, utility line maintenance crews, and other people go into remote places where many of us grow our guerrilla marijuana gardens…and they often tend to be politically conservative folks who oppose marijuana.

Guard against human invaders by carefully choosing marijuana grow sites with the goal of making them impossible to find.

Make it hard for people to get near your medical marijuana garden.

I put large rocks and logs onto dirt roads that hunters and others use, and I’ve obscured existing trails, so I can keep people away from my garden.

Sometimes outdoor marijuana growers come face to face with bad guys, as you can read about here.

Each of us has to decide how hardcore we’re going to be when we’re protecting our marijuana crops and ourselves from human enemies.

If I catch someone trying to rip off my marijuana, and especially if they threaten me or my crew with physical harm or narking my location, I’d be likely to injure the person or otherwise immobilize them… perhaps permanently.

Rabbits, deer, groundhogs, rats, sheep, and other mammals might find your marijuana plants or their roots tasty. This problem mostly occurs when plants are very young, and continuing a few weeks into grow phase.

By the time your marijuana plants are more than 3-4 feet tall, and especially when they’re sporting big buds in bloom phase, you’re unlikely to see much if any animal predation.

You can at least partially keep animal pests out of your garden by using deer repellent spray, mothballs, hot sauce (yes, hot sauce!), carnivore urine, fencing, fake owls (scares mice, rats, rabbits), and by camping near your crops so you hear animal invaders and scare them away.

Some marijuana growers use traps, bungee pits, shotgun tripwires, or poisons, but these lethal methods can backfire.

They’re bad for the environment, and they may go wrong so that you injure yourself or other innocent people.

If law enforcement discovers a booby-trapped garden, they go extra hard on you…especially if someone gets injured.

Marijuana plants are worth big money, especially if you’re growing outdoors where one plant can yield mega-pounds of dry weight.

Bugs, molds, and mildews can hurt your crops, but human enemies are far worse because they can steal your crops and get you busted too.

I wish you good fortune as your protect your valuable marijuana garden.

The key is to carefully select your outdoor grow site, and guard its location as much as possible, so nobody discovers it.