It may still be nearly two years away, but politicians are already looking toward and gearing up for the 2020 United States presidential election.

There is no shortage of Democrats considering a run for the title of commander in chief in that election, and issues related to cannabis legalization will likely play an important role as candidates weigh their options. Rep. Joe Kennedy III (D-Mass.), who seems likely to throw his hat in the ring, has opposed cannabis legalization in the past but seems to be warming up to the idea of legalizing at the federal level, according to STAT News.

“It’s fairly obvious that Rep. Kennedy has seen the writing on the wall, both within his party and across the country,” says John Hudak, a senior fellow at the Brookings Institution, who focuses on cannabis issues. “He is someone with ambition for higher office, and he knows that future success within the Democratic Party is a bigger challenge if you oppose legalization.”

Jolene Forman, senior staff attorney at the Drug Policy Alliance, agrees with Hudak. She says Kennedy knew he was in the minority when it came to opposing legalization, and he may now be realizing that this would be detrimental to his political aspirations.

“Rep. Kennedy was a self-admitted outlier on marijuana legalization,” Forman says. “The congressman was motivated to shift his stance and start supporting legalization because marijuana criminalization has been a failure.”

As things stand, according to a recent poll conducted by the Pew Research Center, nearly 70 percent of Democrats — and 75 percent of independent voters who lean Democratic — support legalization, compared to 45 percent of Republicans.

“It is pretty clear which direction the country is headed on this issue,” Mason Tvert, a spokesperson for the Marijuana Policy Project, tells Big Buds. “Candidates who have previously expressed opposition are taking a second look at the issue, and many are coming around to become neutral or even supportive of reform.” 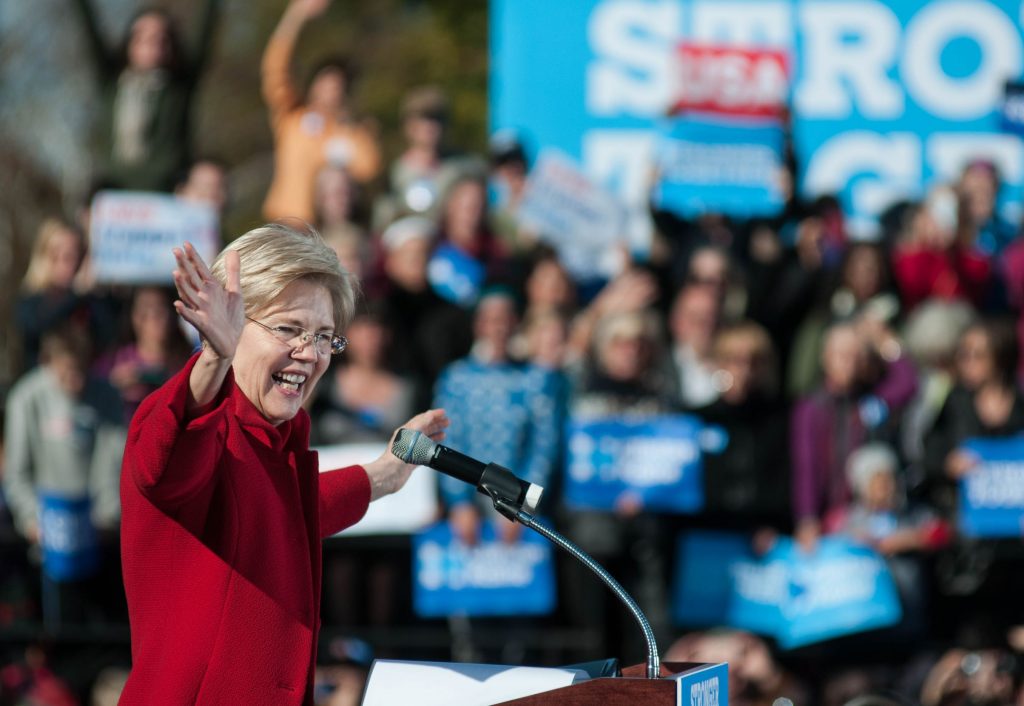 Sen. Elizabeth Warren is one of the sponsors of the STATES Act, legislation that could prove pivotal in the federal legalization of cannabis.

Beyond Rep. Kennedy, there has been support for legalization among the top Democratic contenders for the presidential nomination. Sens. Bernie Sanders, Elizabeth Warren, Kamala Harris and Cory Booker, as well as Rep. Beto O’Rourke, have been pushing for legalization in Congress, but one outlier and possible contender, former Vice President Joe Biden, has not been vocal about legalization issues.

“Former Vice President Biden has yet to come around on the issue and is probably the least supportive of the potential candidates that are being discussed in the media,” Tvert says.

There’s a chance that legalization could happen before the 2020 election, but that largely depends on how Republicans in the Senate, where they still have control, and President Donald Trump treat the issue. So far, Trump hasn’t been clear on how he would handle Congress successfully passing a legalization bill.

“It is hard to see a scenario in which President Trump would veto a legalization bill,” Hudak says. “Unlike some Republicans, who would have to worry about embracing a position seen as ‘too liberal’ by many social conservatives, Mr. Trump has a remarkable skill of convincing Republicans to approve of the policies he likes — even if they violate traditional Republican orthodoxy.”

Forman and Tvert say Trump has been relatively clear that he’d like to see this handled as a state issue, which is a good sign he may approve the STATES Act sponsored by Warren. That bill would declare cannabis legal at the federal level, but it would allow each state to decide if it wants to have legal marijuana.

“There has been increased bipartisan support for marijuana law reforms at the federal level,” Forman says. “It’s only a matter of time before marijuana is legalized federally.”

One reason Kennedy says he changed his tune was that he started to understand that legalization isn’t just about people being allowed to consume or sell cannabis — it’s also a racial justice issue. This is one of many examples of how legalization is a complex and far-reaching issue that goes beyond people getting high.

“I’ve said for some time that cannabis can be a sneakily important issue in the 2020 Democratic primary — and ultimately the general election — because it serves as an important springboard for a variety of issues: criminal justice reform, economic equality, opioids, economic growth, racial justice and civil liberties,” Hudak says. “A candidate can elegantly talk about this issue — which is popular among a variety of diverse demographic groups — to discuss other issues that matter to those groups.”

Polls released over the past few years indicate that the legalization movement is growing in popularity among Democrats, Republicans and independents. The trend lines are clear. Hudak says that a Republican candidate probably wouldn’t be hurt by taking a pro-legalization stance, and may even benefit from it, because young Republicans largely support cannabis. It’s unclear if the legalization issue will be dealt with by the 2020 election, but it seems likely it will take longer than that, and that means it will almost definitely be a major topic for those who decide to run for president.

Taking Care Of Dispensary Business In This Competitive Cannabis Market
DIY Cannabis Concentrates: A Hobby With A Heck Of A High