The reputation of cannabis in the 1970s was one of stigma, stereotype and stagnant sciolism. Demonized by the government, the media, and anyone who opposed the political and social opinions of “stoners,” it has since taken almost half a century to chip away at this negative perception of cannabis, propagated by then-President Nixon’s prevailing war on drugs.

Enter Cheech & Chong’s Up In Smoke, the original stoner buddy comedy, which is celebrating its 40th anniversary this fall — if, that is, one can believe it’s been four decades and we still remain under federal cannabis prohibition.

Comedy vanguard Cheech Marin and Tommy Chong parlayed a stand-up skit into long, healthy careers spanning multiple entertainment mediums, but their first film is one that has never lost its popular appeal, despite being about something that was decidedly niche and counterculture at the time.

LA’s Grammy Museum is currently honoring the 40th anniversary of Up in Smoke with an exhibition to commemorate not only its place in the cultural lexicon, but the roots of popular cannabis culture as we know it.

After peeking at the museum’s collection, Big Buds Magazine caught up with Tommy Chong to talk about all things cannabis, culture, and even politics.

An Old-School Cannabis Point Of View

Chong speaks very warmly, in his signature Cali-via-Canada drawl, about his love for the cannabis plant — but don’t bother asking him for a brand recommendation or strain selection.

It’s quite possible his affinity for cannabis in all its forms and varieties has its roots in a time when chemotypes and strain names were not documented, nor was plant DNA as tested as it is today. With that in mind, one could see why simply enjoying pot without geeking out over lineage and genetics could be somewhat freeing — that is, if you trust in the plant.

Elaborating further on why he’s not bothered by types of cannabis, Chong explains, “It doesn’t matter. I mean, what’s a strain? It’s a name. And then they say, you know, there’s two, indica and sativa, and I like either one. I’m old school — as long as it looked like weed, it was OK.”

This attitude extends to Chong’s experience as a grower, which sounds less like a scientific operation and more like that of someone who is simply caring for a vegetable garden.

His sage advice is like that of an Italian nonno coaching their little ones on growing apricots: “It’s sort of like a gamble. You put the plants in and you figure out where the males are, and you get rid of them. Then the rest are females. It’s sort of like real life; the only thing that’s good is the females.”

Continuing to crack on male plants, Chong tells us what they’re good for:

“They’re just good for making rope. The females, they give you pleasure. So, that’s all you have to learn, and all you gotta know. In fact, the bad pot is only good for selling to the military, because when they get drug tested, then they pass. It doesn’t stay in their system.”

Tommy Chong Fought The Law And The Law Won

Chong knows his plants, even if he doesn’t particularly care about their individual names. As one of the most visible cannabis consumers in popular culture, he has always been vocal about the freedoms and liberties that cannabis consumers should enjoy. However, his advocacy stepped up a notch following his prosecution for conspiracy to distribute drug paraphernalia, i.e. glass bongs, in 2003, which saw him serve nine months in a California federal prison as part of a plea deal that protected his co-accused, wife Shelby and son Paris.

At the time, things could have been a lot worse for him with the feds. “When I got busted for bongs,” Chong recalls, “I had just harvested a crop from my roof, and I had just put it away in my son-in-law’s art loft, and then the cops raided me I think the next day. It was one of those weird things.”

The 2006 documentary about this particular bust, a/k/a Tommy Chong, was a deep dive into the situation that resulted in Chong’s incarceration and subsequent probation. Looking back, he sees it as a positive time rather than a negative.

Check out the official trailer below for a/k/a Tommy Chong, available on iTunes:

Asked what he thinks the US population needs to know about the prison and legal systems, and Chong cuts straight to the bone. “You know who needs to know is these Republicans that are screaming about socialized living. Because when you think about it, the Republicans are responsible for socialized living. The federal penitentiary is really a socialized experiment. Because you get, you know, from cradle to grave, you get housing, you get food, you get medical, you get everything. You get legal, you get legal help. It’s all given to you, all you have to do is be in the penitentiary and locked up.”

At first listen, this logic could sound like praise for the system. However, further explanation illustrates the fact that all those inmates Chong is referring to serve as little more than a revenue stream for private prisons and their investors. By incarcerating millions of Americans, many for nonviolent cannabis-related infractions, the private prison sector profits in piles.

Still, providing what is often subpar care is still more than many Americans can afford when not imprisoned, and this is the ugly truth that Chong wishes to illustrate.

“[The private prisons] benefit, because most of the federal prisons, if not all of them, are privately owned. For instance, the Bush family had a stake in the company that made prison uniforms, and so they benefit. [The] more black people they put in jail, the more money they made by supplying the clothing for them, so it’s a big scam for many years now, and America is still — was, and still is — a very racist country, with all of the laws they have on the books right now.”

When you think of the penchant for privatization and penny pinching that big industry engages in to the detriment of the consumer, Chong’s analysis is on the nose. Someone is benefiting off the incarcerated, and we the people are paying for it while endorsing it with our complicity.

Opening up the topic of politics like a wriggling can of worms, Chong’s insight is both razor sharp and hilarious. While attorney general Jeff Sessions — perhaps the biggest political opponent of cannabis legalization — feels like an easy target, nonetheless we wanted to hear the opinion of one of the most recognizable cannabis advocates around.

So, given the chance, what would Chong say to the attorney general should they cross paths? And though the answer isn’t pretty, such levity is appreciated in this heated political climate:

“Jeff Sessions? I would tell him, ‘Listen, when you go to jail, man, wear about three to four pairs of underwear,’ because sometimes when they first put you in, you don’t get a chance to change, they don’t give you any clothes or nothing, so sometimes you have to go two to three weeks without a decent change.

“I would also tell him that, you know, when you get charged, don’t fight it. If you fight the charges, the feds will double your time. If you take whatever deal they give you, then it’s best. I did that, actually, I didn’t fight it and I only got nine months. Had I fought it, they would have given me five years. When it’s a federal case, you can’t fight the government. So, that’s what I’d tell Sessions for sure.

“And also, they’ll probably put him in solitary [confinement] like they did with [Paul] Manafort, because there’s too many people out there to kill him, so that’s the advice. And that’s the same advice I’d give to Donald Trump, too, by the way, because he’s gonna go to jail, for sure.”

As amusing as this hypothetical is, here’s hoping whatever happens, truth and justice prevail and democracy survives. The great thing about someone as insightful as Chong is that a conversation about such a dark topic is still somewhat joyful. 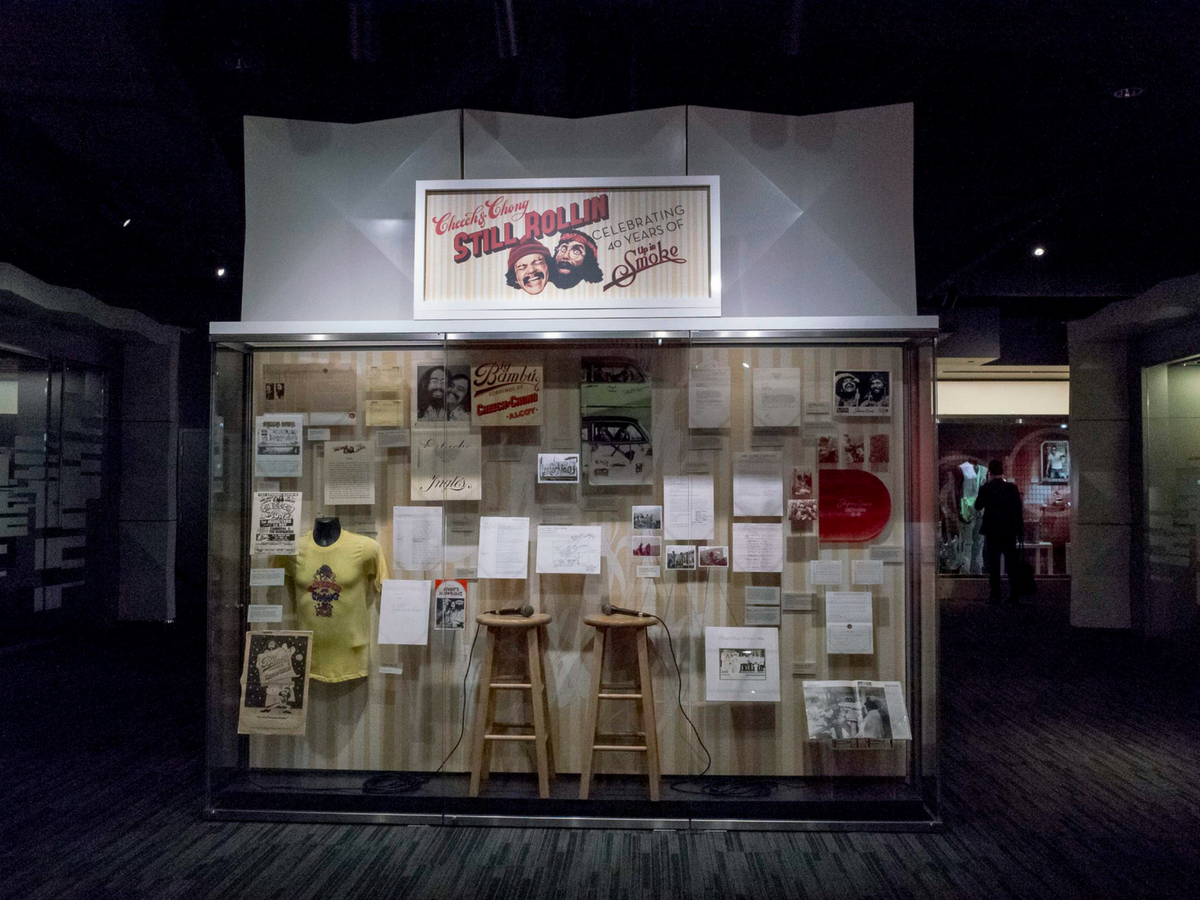 Seeing as how Canadian-born Chong is now a resident of California, we inquired about any additional benefits he thinks the Golden State has earned since full legalization came into effect last January.

“Well, the good part is that legalization gives everyone access to safe medicine. Medicine that can cure Alzheimer’s and autism and help with epilepsy.”

Chong continues, “These are serious diseases, [like] cancer. Marijuana helped cure my cancer. I had rectal cancer and I had the operation, but it was marijuana that helped me recover to the point where I’m cancer free, so that’s the good part.”

Chong believes that when it comes to illness, we should allow people to seek any cure they choose, from a humanitarian standpoint. And when it comes to medical marijuana, the incentive is even higher, seeing as this potential cure also acts as an innovation driver.

“You know what the cannabis did?” Chong elaborates, “[It] opened the hemp industry again. Hemp is literally a magic plant. You can eat it, you can literally build houses with it, you could fuel your gas-eating cars with it. You know, if it wasn’t for cannabis, Columbus would never have discovered America, because the word canvas, [as in] canvas sails, comes from the word cannabis.”

Take it from Tommy Chong, cannabis is only going to further infiltrate the zeitgeist as it continues to rise in popularity and functionality.

“Cheech & Chong: Still Rollin’—Celebrating 40 Years Of Up In Smoke” is currently on display at the Recording Academy Grammy Museum at LA Live. For more information, visit the Grammy Museum website.

Small But Spiteful: Meet The Root Aphid, Possibly The Greatest Threat To Cannabis
Hydroponic Nutrients Brands Put To The Test By One Determined Cannabis Grower