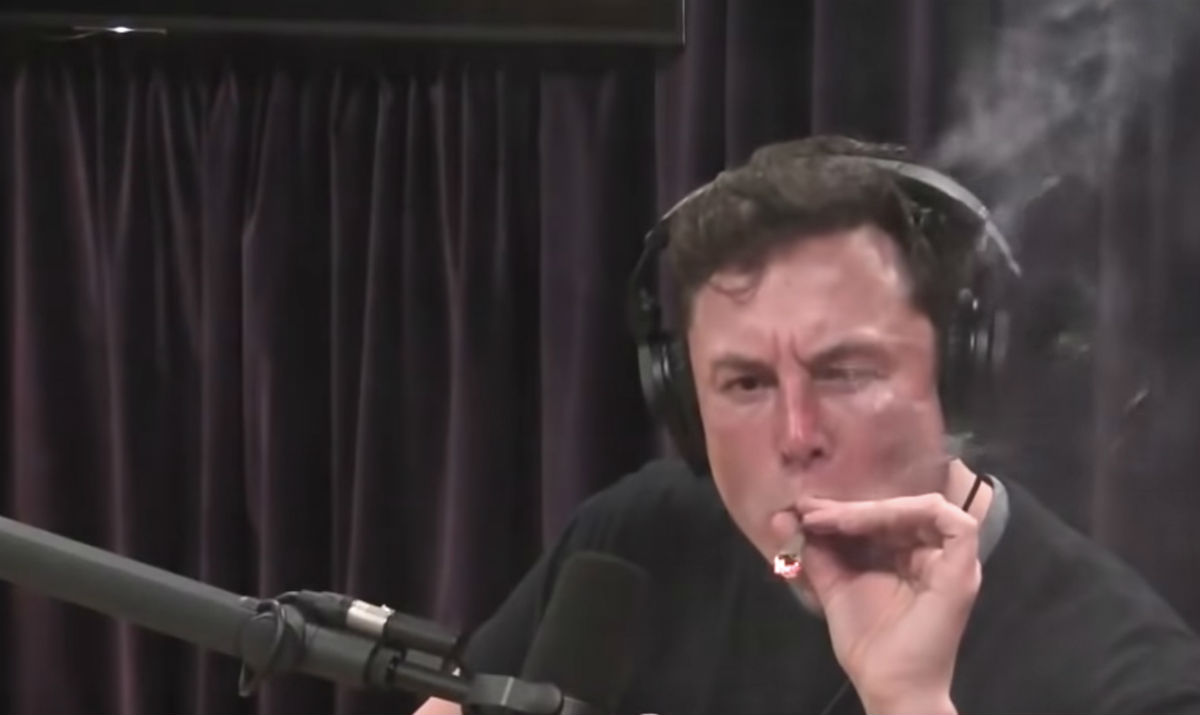 On September 6, Tesla co-founder and CEO Elon Musk was filmed smoking weed during a live podcast recording of The Joe Rogan Experience. The interview lasted for two and a half hours.

“Yeah, I think I tried one once,” Musk said while laughing, right before he inhaled a blunt — cannabis wrapped in tobacco leaves — handed to him by Rogan, a noted cannabis advocate. Although Rogan suggested he shouldn’t light up on air — “because of stockholders, right?” — Musk took a drag after Rogan insisted doing so would be legal. And it completely was, since the recording was filmed in California.

While some cannabis advocates — including renowned astrophysicist Neil deGrasse Tyson — thought this move was a bold yet cool one, many entrepreneurs in the corporate community had a real problem with this puff-puff-pass, and likely as a consequence of the recording going viral, Tesla stocks immediately dropped nine percent.

“It’s complete hypocrisy for corporate culture to smear Elon Musk for smoking weed in his free time,” Stacey Mulvey, founder of the cannabis-infused yoga project Marijuasana, tells Big Buds. “Especially considering that had he been drinking beer or even taking shots, news of the fact wouldn’t have made it past the podcast audience. Contrast all the offices that have beer taps installed to boost team morale with the public outrage generated by Musk taking one toke with Joe Rogan, and you’ve got a serious double standard.”

Musk’s critics in the corporate community aren’t his only detractors. He himself was once a cannabis critic, which was documented by a major newspaper less than a month ago. Just a few weeks prior to his appearance on Rogan’s podcast, in a New York Times interview, Musk said, “Weed is not helpful for productivity. There’s a reason for the word ‘stoned.’ You just sit there like a stone on weed.” The question that prompted his response was in regard to his recent tweet about taking Tesla private and selling stocks for $420 each. The billionaire denied any connection he had to cannabis and even condoned the plant’s consumption.

Part of the backlash included input from the military, specifically the US Air Force. According to CNBC, the Air Force is still trying to figure out how to approach this incident. Federal policy clearly states that cannabis use is strictly prohibited to anyone with security clearance, which Musk has per his Air Force contracts for his space transportation company SpaceX. (The military has similar standards for enlisting new recruits, although it has been more lackadaisical in its approach recently, as more and more states pass legalization policies.) An official investigation into Musk’s behavior has yet to be publicly announced.

However, folks in the cannabis industry — CEOs included — considers Musk’s spontaneous drag a win toward fighting stigma against cannabis and those who consume it.

“It’s great to see that it appears Elon Musk is walking back some of the negative stereotypes he’s reinforced in the past,” Peter Vogel, CEO of Leafwire, tells Big Buds. “His public usage seems an effort to destigmatize cannabis and show that even successful business people can be users of cannabis; cannabis is just a business like any other.”

In the meantime, as Musk continues to staff up Tesla in the wake of high-profile resignations, we’re just curious as to whether he accepts job applications from formerly incarcerated applicants with prior cannabis charges and convictions.

Legal Cannabis In Switzerland: Between Hype And Hope
Sensizym: Energizing Enzymes That Clean Your Cannabis Root Zone For Supercharged Growth And Yield