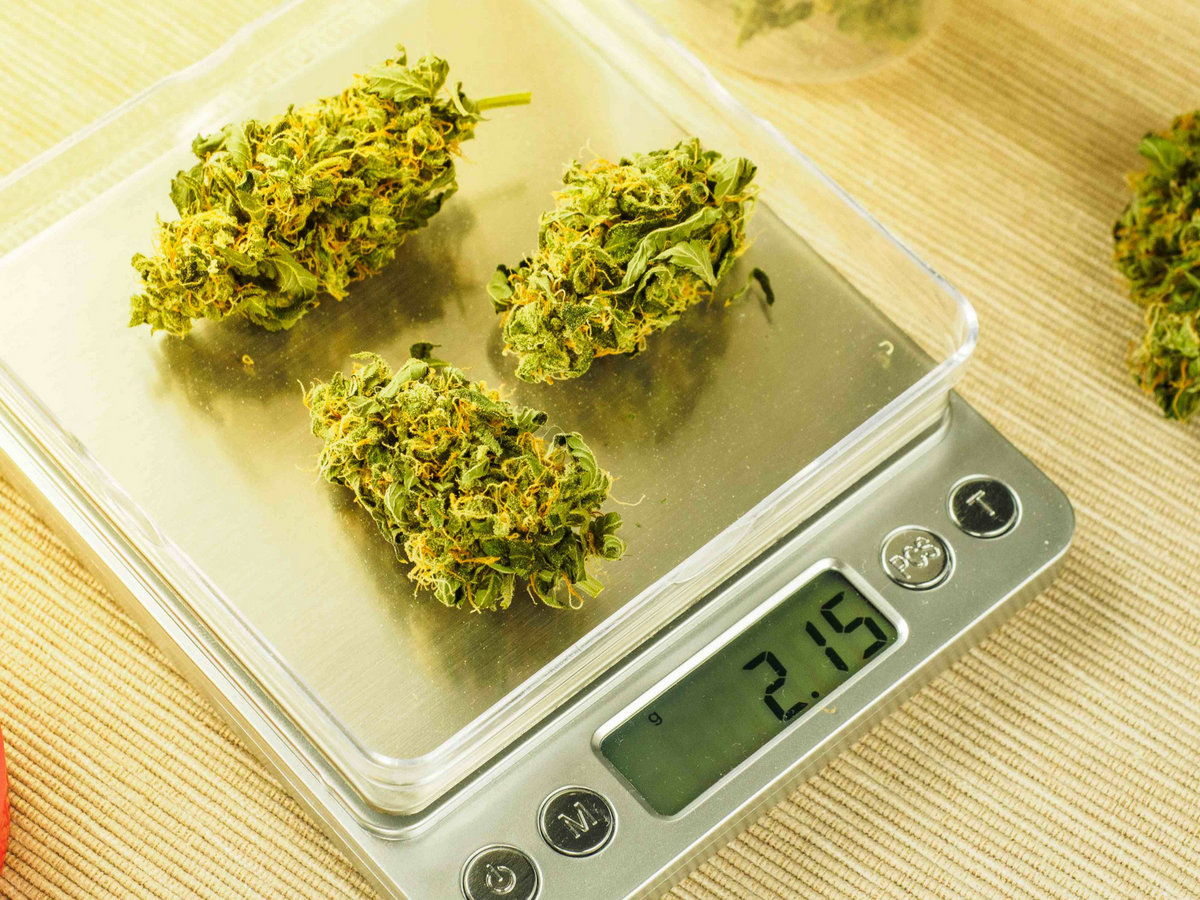 Not since the East Coast-West Coast hip hop rivalry of the ’90s have we seen a clash of the coasts quite like this.

When it comes to the cost of cannabis, there is a noticeable difference between how much folks are paying at dispensaries on the West Coast versus how much people are paying on the East Coast — up to a difference of almost 23 percent! To understand these differences better, the folks at Wikileaf, an online pot comparison website, took a deep dive into how much cannabis costs on both coasts and what contributes to those factors.

And you may be surprised to hear that the results aren’t too surprising. In areas where cannabis has been legal longer (such as California, Oregon and Colorado), prices are lower. In fact, when taking a look at how much an eighth of an ounce costs on both coasts, consumers in the west pay an average of 22.5 percent less than those in the east. Wikileaf estimated the average West Coast price for an eighth at $36, a little over a $10 difference.

According to Wikileaf, which gathered data by averaging costs of the various dispensaries in its system that matched the location parameters, there are a variety of factors that go into figuring out how much to charge customers for cannabis. One major reason that it’s cheaper in the west is because states in that region have been legally producing cannabis for longer than ones in the eastern part of the country. Grow facilities that have been around for a while aren’t dealing with any startup costs, and overhead is usually lower the longer they’ve been in business. 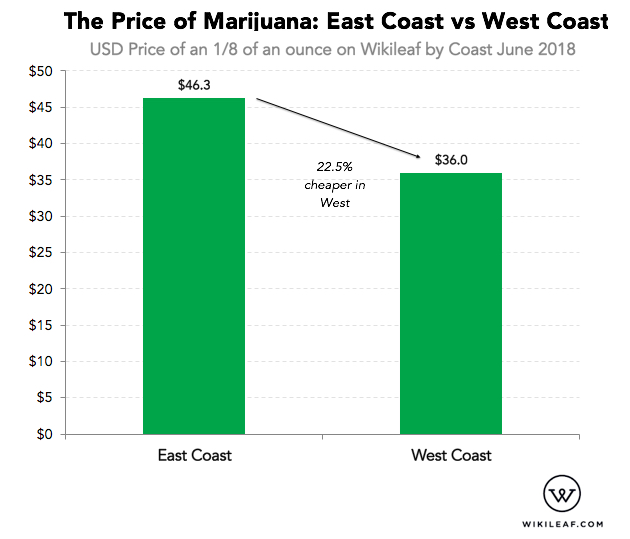 Growing and production methods vary by coast as well and can impact consumer prices. Favorable climate and access to large outdoor areas make outdoor growing more accessible on the West Coast. There is more physical room for competition in areas like California and Oregon, which keeps the competition hot and prices cool. With more available land on which to grow, fresh crops of growers frequently pop up, thus increasing the cannabis supply. Obviously, this ends up being a win-win for consumers, who end up paying less thanks to excess product that leads to price drops.

However, on the East Coast, there is limited agricultural land to work with, plus seasons of frigid temperatures. This leads to more indoor grows, which increase production costs and offer less space, further limiting how much a company can grow in a given location and season.

Beyond space and weather concerns, there are also legal issues that can impact cost by limiting supply. In parts of the East Coast, states are still muddling through various restrictions and policies that have impacted how many companies in a given area are issued cannabis licenses to grow and process cannabis. With fewer producers in the market, growers can keep their rates higher, knowing that at the moment, competition is slim. 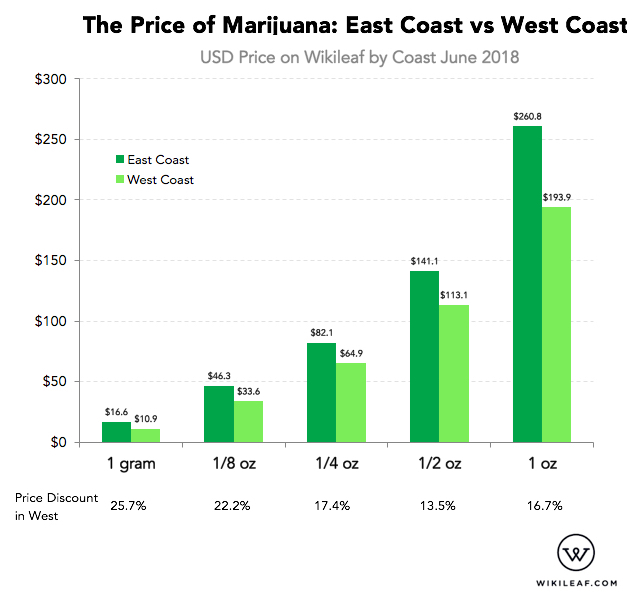 Meanwhile, on the West Coast, there is almost a glut of growers in some areas, driving down prices, particularly when the product is limited as to where it can be sold. Currently, excess product cannot be legally shipped across state lines.

One important thing to note is that even with these cost differences between opposite sides of the country, there can be small pockets of price discrepancies within the same state. Much of that has to do with local taxation, business costs and supply — and yes, this discrepancy even occurs among cities located in the same state. For example, you’ll pay almost $10 less for an eighth of an ounce in Los Angeles than you will in San Francisco. And while Portland, Maine and Baltimore, Maryland are both on the East Coast, you’ll end up paying $17 more for an eighth of cannabis down in Maryland. Indeed, Baltimore and Boston are the two most expensive cities in the country when it comes to cannabis costs.

We spoke with CEO and founder of Wikileaf Dan Nelson to learn more about his company’s investigation into location-dependent cost differentials and what this means for the industry. According to Nelson, while prices on the East Coast are noticeably higher at the moment, he anticipates they’ll follow patterns similar to what’s been seen on the West Coast. Nelson states that prices start high, but should steadily drop as more licenses are issued and supply catches up with demand.

“Other factors, such as topography and business environment perspective, will come into play in the east,” he notes, “but we still expect a similar downward trend over time.” Nelson also says that as the overall number of licensed growers stays low — as in many places along the East Coast — producers will raise their prices and the effect will trickle down to consumers, who will end up having to pay more at the dispensary. 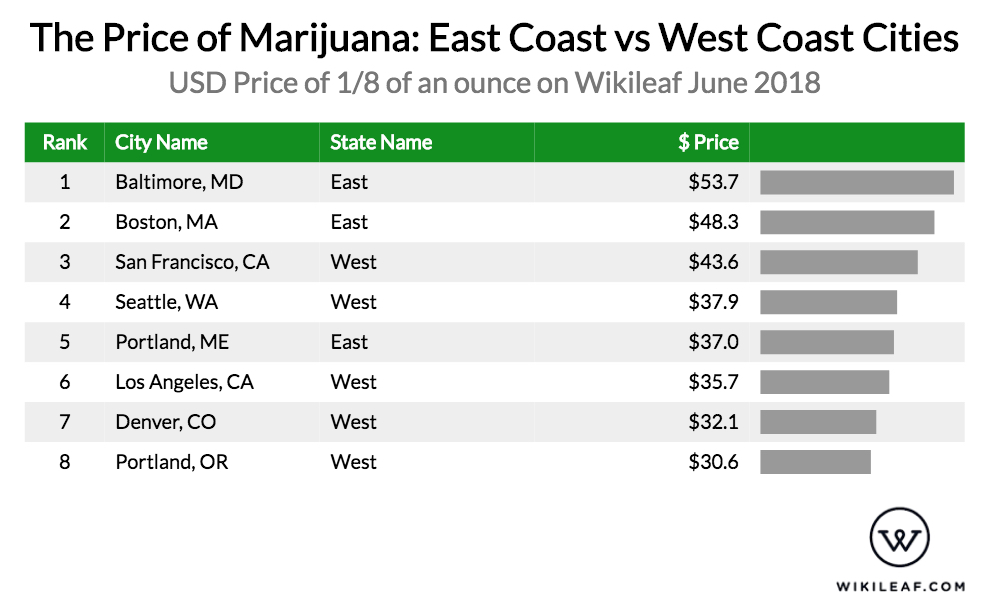 So, what can be done about cost differentials between coasts?

Is this something consumers in particular will just have to deal with? Residents of states that have policies driving cannabis competition down should certainly push for changes in state or city mandates, as well as for tax laws that increase prices.

Nelson says that the biggest change will likely only come when states allow an increase in the number of licenses issued to retail dispensaries, wholesale producers and processors.

“Depending on the state, this process can get convoluted, with issuing boards getting bogged down in the minutiae of local municipalities.” he explains. “Until the state proportionately divvies out licenses to meet demand, I think the East Coast will continue to have high retail prices and a thriving black market.”

What does this mean for consumers? If you live on the West Coast, you can continue to enjoy your cheaper cannabis, unless you’re in the Bay Area — then you might want to take a trip down to LA or out to Colorado to experience true West Coast costs.

As for the East Coast? For many states, for now it really is a game of wait and see. As restrictions lessen and more licenses are given to growers, there will be a slow and steady decrease in consumer costs. However, don’t anticipate West Coast prices anytime soon. With all the factors the East Coast has to contend with, consumers and medical marijuana patients there may need to just get used to the high price of getting high.

Stirring The Pot: Here’s What Congress Is Doing For Veterans When It Comes To Cannabis
Risky Business: Here’s Why Cannabis Is Struggling Right Now